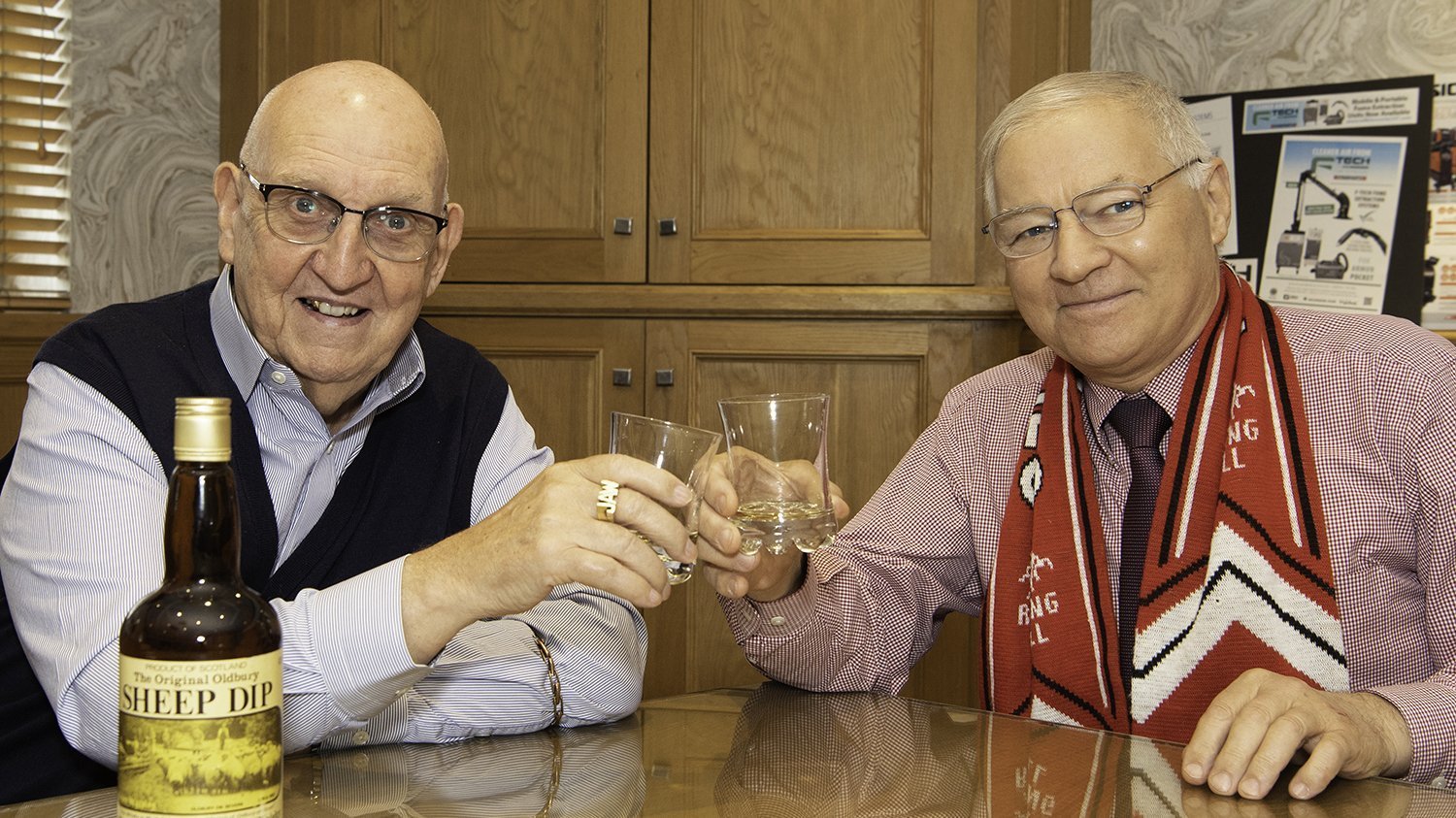 It was way back in 1987, when former Salford Chairman, John Wilkinson, was given a bottle of rather special whiskey by one of the club’s longest standing sponsors, Austin Wilkinson (no relation) of Austin Wilkinson Transport.  He asked the Chairman to keep it until the club next reached the Challenge Cup Final, at Wembley, and then the two of them could open it and together toast the achievement that the whole of the city yearned for.

Sadly, Austin Wilkinson, died in 1990, but John has kept the bottle securely sealed in a cupboard, and upon the very long-awaited return to the stage they last graced in 1969, on Thursday afternoon he was joined by Austin’s eldest son, James, to fulfil the agreement John and Austin had made, over thirty years ago.

Shortly after the convivial meeting between the two had drawn to an end, John’s memory went back to the occasion the bottle first came into his possession, and he described his feelings on the marvellous turn of events which has come to such a wonderful culmination, and so triggered their get together.

“Austin was a man of great character, and what he said usually came to pass,” said John Wilkinson.
“I was asked to keep the bottle intact, and I’m just so pleased today, to have unscrewed the top and been able to taste the wonderful whiskey inside.  We think that it could be getting on for fifty years of age, because it had been bottled eight years before he purchased it, but It really did live up to all our expectations.

“It was so good to have James come and represent his father, because James has carried on the connection with the Club for all the years I was there, and nowadays his company is the carrier for all my company’s products.”

He added: “When Salford walk out at Wembley on Saturday, I shall be filled with immense pride, because it was always my ambition to try to achieve that.

“James and I have just toasted the success of the club in reaching Wembley.  We hope that they have an equally successful weekend, and we have vowed to have a repeat meeting to toast their returning with the Cup.”

????️ The posts are up and the Salford Red Devils crest is in the stands @wembleystadium!

????️ Purchase a virtual ticket to show support in @TheChallengeCup Final and receive a souvenir ticket memento following the event!

For James, who had not had the occasional glimpse of the bottle in his cupboard to keep it to the forefront of his mind, it had not immediately been one of his thoughts, on seeing Salford win through the semi-final and on to Wembley.

“I had known about the whiskey from my father first buying it,” said James Wilkinson.

“He had got it from a British Rail Lost Property Sale, but I had forgotten about it over the years, and I hadn’t known he had given one of them to the Chairman until John happened to mention it, around ten years ago.

“We still do work for John, so we see each other quite regularly, so when Salford got to the Final, he mentioned about opening the bottle the next time we met up.

“The one thing about Wembley is that, unlike the Grand Final and the play offs, you don’t have to be high in the league to stand a chance of getting there. It is all about how you are on the one day and not the run of victories you happen to be having.

“I think I speak for most people when I say we had always believed it would happen. We just didn’t know when that would be. It also gives all the players the opportunity of winning the Lance Todd Trophy.

“Come Saturday, as the players walk out onto the pitch, I think it will bring a tear to my eye at the thought of my dad’s vision of Wembley, forty years ago, as a life long Salford fan, with his motto of ‘Never say die’.”

🤔 Club chaplain and @lighthouse_uk pastor @PPHallam talks more about mental health, in his thought for the week.

📽️ The Betfred Challenge Cup Quarter-Final is now available to rewatch on RDTV.