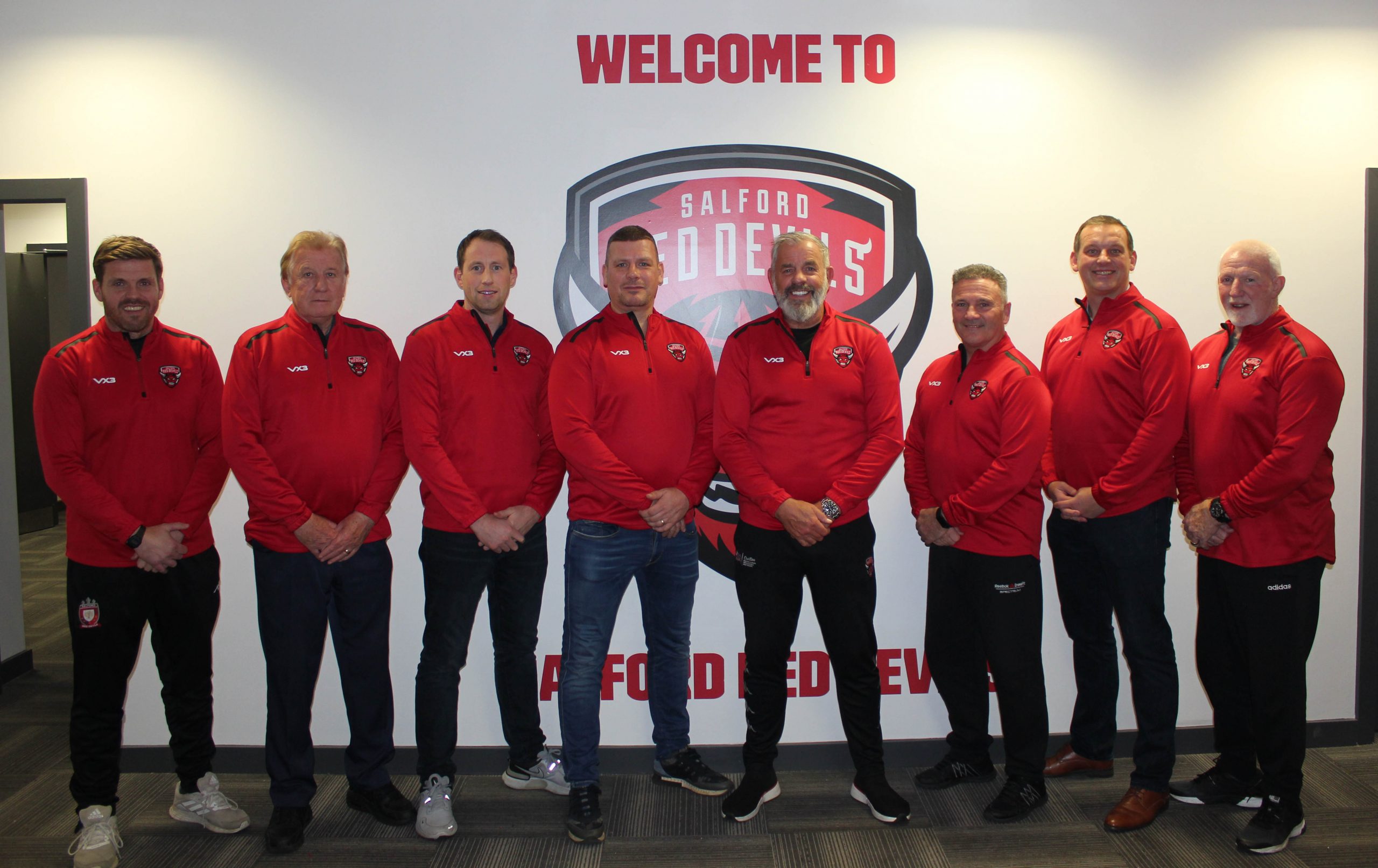 The club is delighted to announce the Player Pathway staff structure for 2022. As part of Red Devils Building the Future strategy launched earlier this year, there has been significant work to enhance our Player Pathway programme. This work so far has seen the club and the Salford Red Devils Foundation delivering an enhanced programme of Community Club and School Rugby League development work, which will continue to grow during 2022. We also launched our ground-breaking Wales RL partnership, which has seen the first three players come through the system to join the club’s pathway last month. Also, alongside the Welsh partnership the club recently announced another new exciting partnership with the Ipswich Jets club in Australia. The next stage of the strategy sees the appointment of new Player Pathway staff for 2022 and beyond.

Ian Blease, Salford Red Devils Director of Rugby and Operations. said: “After the disappointment of the Academy licence application process this year, we will still run our own Development Academy to run alongside a new Reserves Team & Reds Elite Development Squad (REDS) structure.

“We have added some quality people to the club’s rugby department staff who are well thought of within the community game and will drive our Player Pathway programme forward, from scholarship age right through to the Reserves and First Team set ups.

“The hard work has already begun, they are already recruiting new players from all age groups, and with the Reserves system starting again in 2022, the timing couldn’t be better. My ambition to have 5 local players in the Salford First Team is still a main driver for me. The quality of people in the Player Pathway staff gives me immense confidence that we can achieve that ambition in the years to come. Nothing would make me prouder to see the next Kallum Watkins or Jack Wells come through the club’s own player pathway system into the First Team.”

Paul Rowley, Head Coach, said “Over the last year the club has worked really hard on building relationships with our community partners and school networks, working towards putting together a first-class pathway to service our club and provide aspiration for the city and surrounding areas young players. I’m therefore incredibly proud of the group of high achievers who have committed to representing Salford Red Devils to lead the delivery of our Player Pathway programme.

New for 2022 is the Reds Elite Development Squad (REDS) programme. This innovative programme will select the best young talent from 14 to 17 years old in Salford, Greater Manchester and Wales and bring them together to experience the very best in player development, on and off the field. Our scouting system will identify young players playing in community clubs, schools and colleges in these areas and will bring these players into the Red Devils’ new systems. The Salford RLFC Supporters‘ Trust have been announced as an Official Partner of the REDS programme, with a sponsorship of £22,000 invested into the programme for 2022. The club is hugely grateful for the support of the Supporters’ Trust and their members into the ongoing development of our Player Pathway programme.

The Reserve Team will return in 2022, and the focus will be on building a squad filled with young talent, combined with available first team squad members. Already, we have had significant interest from players across the North West identified through our scouting network for a Reserve Team trial game in November, with the squad being selected in advance of pre-season training.

Our successful Development Academy, based at Eccles College, continues to thrive and is running two separate teams in the 2021/2022 Academic Year. The Development Academy is integral to our Player Pathway programme, successfully combining Rugby League development with a focus on education.

The Player Pathway Staff are:

Stuart is the former Head Coach of the full Welsh National team, Assistant Coach to the French National Team, and Head Coach of England Academy, the Russian Federation, the Serbian Federation as well as being Head of Youth at Leeds Rhinos, Wigan Warriors and Widnes Vikings. Stuart was on the coaching staff of England Academy, which became the first team to beat the Australian School boys, Australia Institute of Sport and New Zealand’s Junior Kiwis in a test series. Stuart also works as an Elite Coaching educator/developer for European RL and is one of 12 RL level 4 qualified coaches.

Danny has worked with Salford Red Devils Under Academy and Reserve teams over the last 10 years. Danny has worked at all levels of coaching within the club from starting out in primary schools and local community as an apprentice leaving school to eventually having the opportunity to work with the 1st team last season. Danny has also coached with England under 19’s college academies that faced Australian School Boys in 2018.

John is a vastly experienced former Great Britain rugby league international and rugby league coach. He is renowned for his creative and innovative coaching with a proven track record in player development, contributing to the progression of numerous players from the amateur ranks to the elite level within rugby league. John has held a number of coaching roles, both within the professional and amateur game, including BARLA Great Britain Head Coach.

John has been with the Club and the Foundation for the past 26 years. He set up the club’s Academy Team and the apprenticeship scheme in 1995. John has held a variety of roles coaching the Academy team for 4 years, 1st team Manager, Welfare Officer, Chief Scout, and Development Manager. In 2006 John set up the Salford Red Devils Foundation becoming Foundation Director, and is currently Heritage and Relationship Manager.

Chris is a former professional rugby league player and is an experienced PE teacher with a background in school leadership. He played for Wigan, Leigh, Oldham, Rochdale and Swinton and is a Rugby League coach educator 2006 – 2009. He has been Head Coach of Salford City Roosters in the National Conference League as well as coaching two teams through age groups at the club.

Paul Berry is Head Coach of the Wales U17’s this year, and has been assistant coach of the Wales U16’s programme He has been involved on the coaching staff at Warrington Wolves for the past nine years as part of their junior development and scholarship programmes. He was also part of the coaching staff that led Rochdale Hornets to their first Championship winning campaign in 97 years.

“There has been a huge amount of work from the Club and Foundation to engage with more community clubs and schools than ever before. Creating a high-quality Player Pathway programme is integral to providing a route for young players to aspire to represent the club in Super League.

“The quality of this team of people is first class, which will ensure that the young players in our Pathway programme will develop not only as Rugby League players, but as people.”