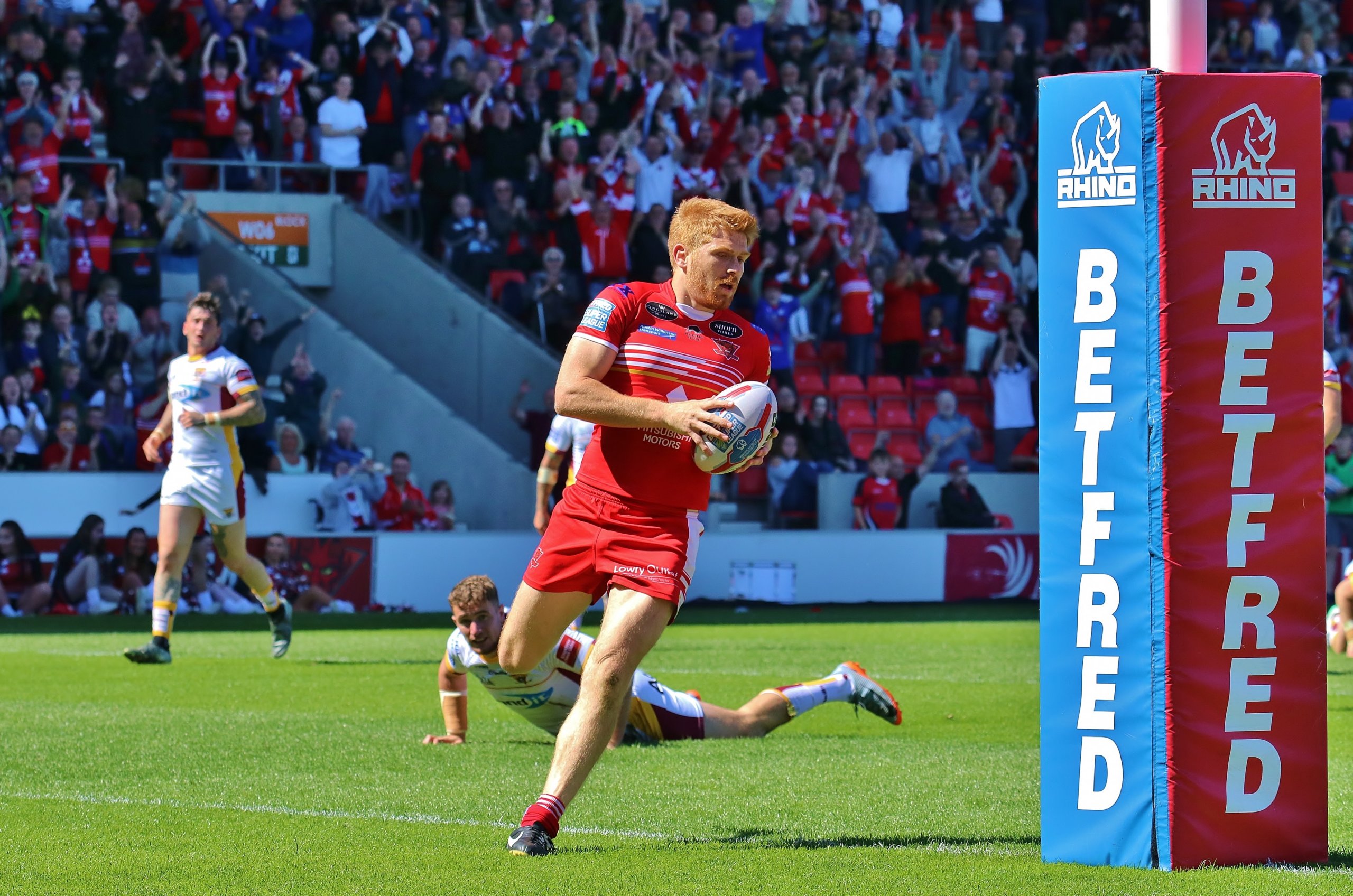 Ahead of tonight’s fixture against Huddersfield Giants we take a look back at the last meeting between the sides at the AJ Bell Stadium in which Salford earned their first-ever Super 8s victory.
The Red Devils ran out comfortable victors crossing for nine tries which marked their first win for almost three months and their first-ever win in the Betfred Super League play-offs/Super 8s.
Salford went into the break with a dominant 30-4 lead over the Giants. Kris Welham opened the scoring as he took advantage of some poor Huddersfield defence from Rob Lui’s kick. Mid-season arrivals Tyrone McCarthy and Manu Vatuvei furthered the hosts lead.
Welham doubled his account for the afternoon before Niall Evalds jinked his way through the Giants defence. Jermaine McGillvary did cross before the break for Huddersfield, but Ian Watson’s side remained in control.
And, their control carried over into the second half with Vatuvei and Jake Bibby both scoring in quick succession to all but confirm victory for Salford. Oliver Roberts scored for Huddersfield, but it failed to slow the Red Devils down.
Back-row duo Ben Murdoch-Masila and Josh Jones both forced their way over in the closing stages to round off a fantastic afternoon at the AJ Bell Stadium. Huddersfield’s Ryan Hinchcliffe did score the final try however it was definitely Salford that were laughing after a rampant display.
Salford Head Coach Ian Watson: “I don’t think we have been as good as that in a game-plan for some time. The boys out there have done themselves proud.
“I thought we won the energy battle. We are a team that like to play, and I thought we did some things really well.
“This has been a real tough period for us with a number of losses, but I’ve always said we’d learn things as a group because the Super 8s has been a new experience for us.
“We have just got to worry about ourselves. The table will look after itself. We have been focusing on us rather than worry about chasing a Grand Final. We will take each step as it comes.”
The teams that day:
Salford: Evalds; Bibby, Welham, Sa’u, Vatuvei; Lui, G. O’Brien; Kopczak, Tomkins, Hauraki, Murdoch-Masila, Jones, McCarthy.
Interchanges: A. Walne, Brining, Lannon, J. Walne.
Huddersfield: Rankin; McGillvary, Mellor, Turner, Ormsby; Gaskell, Brough; Ikahihifo, Leeming, Ta’ai; Roberts, Ferguson, Hinchcliffe.
Interchanges: A. O’Brien, Rapira, Lawrence, Clough.