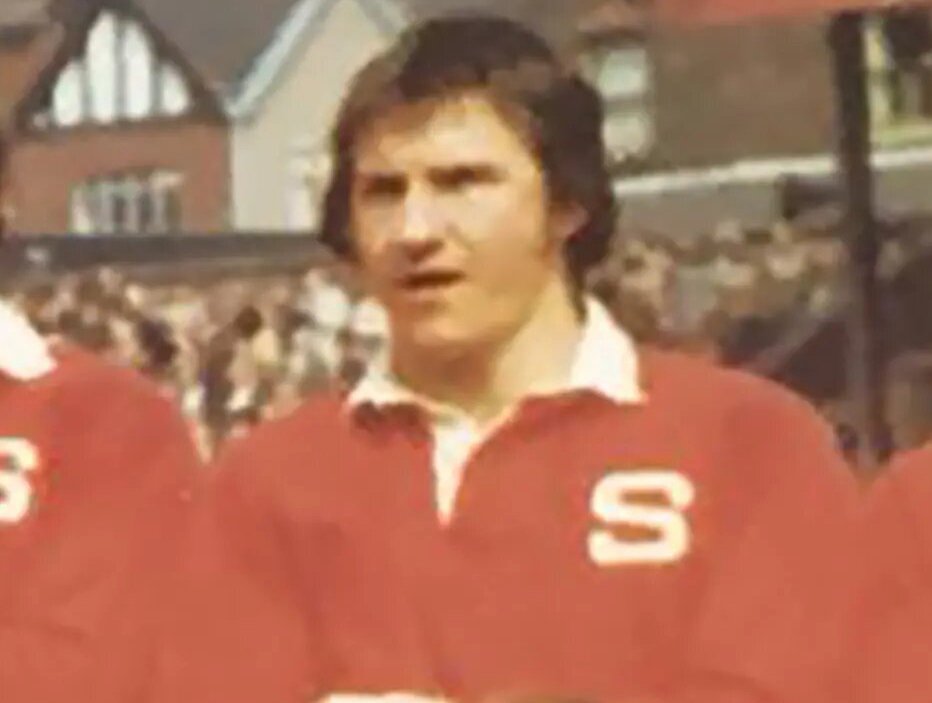 His Playing Days At The Willows

One game which had a significant effect on Doug Davies’s career was for the Liverpool based side, Huyton, against Salford, in the early seventies, and he distinguished himself that day with a fine performance, which he  capped by scoring a try, and that, among a number of other positive elements in his performance, led to his being approached by, then, Salford Chairman, Brian Snape, with a view to his transferring to the Reds.

The stark difference in his moving to such a high profile, highly professional club, certainly was not lost on him, particularly at his first training session at The Willows.

“It was like coming into a different world, yet every single person there welcomed me with a shake of the hand, and I realised then that this was still a club, and not just a group of stand-out players who were just doing things better than anyone else.  David Watkins, with all he had achieved in his playing career to that point, came right over to me and said, ‘Welcome Duggy’.  Instantly I felt part of the team.”

One of the hallmarks of the team’s play was their speed, and this was an element which Doug really had to work hard upon to get his own speed back to how it had been, prior to his leg injury.  Simply being among a group of such pacey individuals in itself helped with this considerably, because he just had to endeavour to keep up with them all.

“At training, we were put into groups of three to race alongside each other and I was always alongside Peter Banner and Keith Fielding.  Peter was given a five yard start over Keith, and I was given a five yard start over Peter for a run of forty yards which required us all to cross the line together.  Everything was timed, which meant that to finish together you had to be at your fastest every single time.

“Each of the three of us was highly motivated not to be last to finish, so it proved to be a really good way of training, in my opinion.  Alongside all the other ploys they used, this really showed what a highly professional club this was, and it was such a big thrill to be there.”

In such renowned company both in the squad, and in the backroom staff, it is fortunate that Doug’s own self-confidence, and confidence in his own playing ability, ensured that he in no way felt out of his depth among the talented individuals with whom he rubbed shoulders, whenever he was there.

“I really enjoy being among that type of company, and being among them lifted me, rather than overawing me.  Similarly, getting applause from the crowd, on the few occasions I scored, was most uplifting too.  I have to say that the spectators there were really good, and extremely knowledgeable, too.  Many of them travelled quite considerable distances from all over the northwest.”

“It was always exhilarating playing for Salford because it was a club which always wanted to be professional.  Everybody in the team wanted to do their best because of the talent in the reserves putting pressure on them to keep hold of their place.

“Beside all of that, just arriving at the club on a Friday evening was always a thrill.  The imposing front to the Social Club showed that this was a club that was as professional as it could be.  There was nothing to match it at any of the other clubs at that time – nothing else was in the same class; nothing else was as lavish.”

The sense of professionalism was further evidenced by the quality of the players in the squad, which, for any new player coming into the side, must have boosted their self-esteem, considerably.

“The point is that no-one in the squad ever felt that they were a star. Every single player thought that he was as good as everyone else, and that they were each equally as good as he was.  To be successful, a team has got to be like that – everyone has to have full confidence in themselves, and in everybody else.  It is the combination of the skills and talents that each person has that makes a winning team.

Doug’s own forte was undoubtedly his tackling, which he was more than happy to supply throughout any game in order to keep the team in contention until such times as the speed men were able to cut loose and run in the tries.

“When you take away all the flamboyance, flair, and speed which the team used to play with, it was little different from when I was playing at Widnes, Warrington, or Huyton.”

Absolutely fundamental to all this was the fact that the players really did get on extremely well with each other.

“Of all the time I was there, I never saw a single argument between any of us.  Everybody just seemed to agree over things, and acknowledge when they had made a mistake in respect of something.”

That this was the case, despite all the pressure the team was under to perform, and the expectation for them to win trophies, is undoubtedly credit to each and every one of them.

“We were encouraged in certain games by the payment of additional bonuses, but, to be honest, the money never really meant a great deal to me.  Yes, it was a professional game, but I played for the enjoyment of it, not the money that went with it.”

Not every player involved in the game at that time, however, was of such a disposition.

The Friday night game was an unbelievable experience every other week with around twelve thousand spectators packed inside The Willows, roaring the team on.

“We honestly never heard the noise; it was there around you, but it just went over your head, yet nevertheless succeeded in lifting you.  There were occasions though when the players had difficulty in making themselves heard above it, when they were calling out the different moves.

“The understanding between the players was extremely high, and after a few matches alongside them all, I knew instinctively just where to stand so that if the ball came to me, something would happen.  It’s something you just get used to in a team.”

The undying respect that the supporters had for the players was in greatest evidence after the game, when they all rubbed shoulders in one or other of the bars, in the Social Club.

“It was always nice to meet the fans and to have a chat with them, and there were always the youngsters with their autograph books.  Not that I was one of the most sought-after people in this respect.”

Coming, as he did, a couple of years after the Wembley Cup Final, which he obviously missed out upon, there were, nevertheless, other occasions which stood out in his career as a Red Devil, not least of these being the winning of the 1973/4 First Division Championship, alongside, in the same season, the Lancashire Cup.

“It was a special season, when we felt we could win anything.  Probably the team was coming to its peak in terms of professionalism, because we were putting into games everything that we had been rehearsing in training.  And we did it in a relaxed manner.  Everything seemed to follow on from that.  It was a wonderful year.”

And did those special times continue!   Doug has a collection of medals from the whole of his playing career, but the large majority came within his time with Salford.  Alongside his 1973 pair, he also has another for the BBC2 Floodlit Cup.

“It was all so absolutely marvellous.  It makes me so proud to have been involved and to have achieved all that.”

The acquisition from St Helens of loose forward, Eric Prescott, had a direct impact upon Doug’s own role within the team.  Up until then he had turned out at loose forward, but coach, Cliff Evans, had sought Prescott to take over that position, at which point Doug promptly moved up to prop,  his magnificent tackling game would continue to benefit the side for the remainder of his time with the Red Devils.

The move certainly suited Doug himself, who was delighted at the new opportunity this presented him with.

“I absolutely loved playing at prop, once I got there, and I can honestly say that nothing, in all the time I played the game, ever upset me.  If I had been asked to turn out at fullback, I would have done so, and relished the experience this presented.

“Scrummaging was an art, and a big part of the game in those days, unlike today’s uncontested scrums.  It galvanised the forwards together as a pack, so that they weren’t pushed off the ball, and you got that man to man contact.

“Playing up front, therefore, gave me the job of controlling the opposition’s front row in the scrum, and stop them twisting around to help their hooker get a better view of the ball coming in.  I wasn’t the biggest of forwards, but I was always strong with the work I did.”