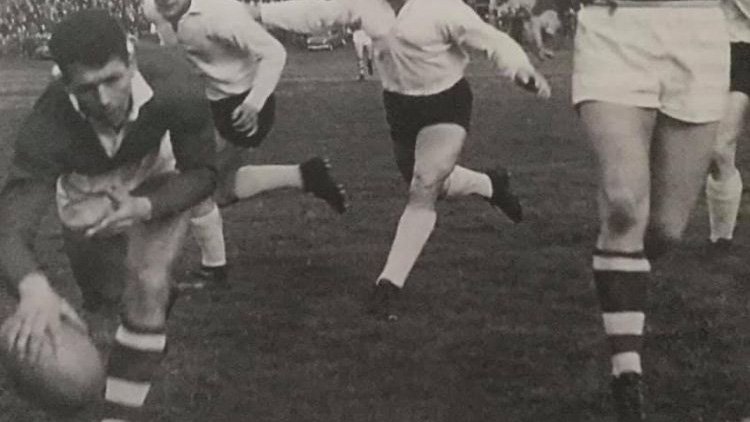 Salford Red Devils are extremely saddened to report the passing of a true and absolute stalwart of the club for over half a century, Les Bettinson, during the course of which he dedicated a lifetime of commitment to the Salford cause, in almost as many roles as it is possible to fill.

Les was born, and brought up in the Cumbrian town of Millom, for whose rugby union team he played in during his early twenties.  An out and out centre three-quarter, he had a class about him on the field which had, from a much earlier date, attracted the attention of the immortal Gus Risman, whilst he was, both on and off the field, leading Workington Town to their glory days, in the early fifties. On his appointment as manager to Salford, he promptly secured Les’s signature to join the Reds, with his debut coming against Batley, on 9th March 1957.

Les’s dedication to the club he had joined was exemplified in an outstanding run of eighty-one consecutive matches, which began at the start of the 1962/3 season and ran right through that, and the following season, to eventually come to a halt at the start of the 1964/5 season.  In total, he turned out on three hundred and seventeen occasions, with a further two as a substitute, over his 12-year playing career with Salford, during which time he crossed for 75 tries, and booted over 10 goals, which gave him a magnificent haul of 245 points.

His prowess as a player was recognised by his home county, with his selection for Cumberland, as it was then named, on seven occasions, the first of which came a mere six months after he joined Salford, to face Yorkshire, at The Boulevard, Hull.  Cumberland became County Champions in both 1965/6 and 1966/7, which saw Les involved in both of these great successes.

His testimonial season came in 1966/7, when he received a rugby league record amount of £2,500, and he celebrated by becoming Salford’s top try scorer, crossing on eleven occasions.  Although his career was somewhat prior to the glory days which were to follow, Les was one of a very few, who provided the platform for the relatively new Chairman, Brian Snape, to build his Championship winning side upon, and from 1964, Les had the pleasure of seeing the club improving season by season.  In 1967, he was part of the team which progressed to the third round of the Challenge Cup, notably beating St Helens, 8-3, in the first round replay at Knowsley Rd, in which he scored a crucial try and was instrumental in their other one.

To back this up, they travelled to Central Park, where they repeated their giant-killing act with an 18-6 victory over Wigan, in which Les was once again on the list of scorers, as indeed he was in the surprising 9-7 quarter final reversal, at Dewsbury in the most difficult of playing conditions.  Although this brought that season’s progress to a halt, their achievements in beating two of the top sides on their own grounds was a milestone in the overall development of the club to the higher echelons themselves, with Les being a lynchpin in this.

The career of any sportsman is relatively short, and Les’s 12+ seasons was quite exceptional in itself, with it eventually coming to its finale with his last match in the Salford jersey coming in the home fixture against Wigan, on 10th September 1969.  The club, however, were fully mindful of the calibre of the person who had been exceptionally loyal throughout his playing days, and so retained his services as support to, then coach, Griff Jenkins. When, in 1970, Cliff Evans took over the coaching role, Les’s role took on the title of assistant coach, eventually for him to become senior coach, part way through the 1973/4 season, upon the retirement of Evans on health grounds.

This was a position in which he was destined to eclipse all his achievements with Salford as a player, with the club reaching its pinnacle, by twice winning the First Division Championship, in 1973/4 and 1975/6.  Alongside this, they lifted the BBC2 Floodlit Cup in 1974/5, and won through to the Finals of the Lancashire Cup in 1974 and 1975, and the Premiership Trophy in 1976.

His retirement from coaching came in 1977, when he was immediately made a member of the Board of Directors, where he became Salford’s representative on the Rugby League’s Management Committee.  His personal qualities were such that, in 1986, he was appointed Great Britain Manager, leading, and organising, the GB tour of Australia and New Zealand, in 1988, with his own appointee, Malcolm Reilly, as coach.  The ultimate accolade came in the same season when he was elected as the first President of the Rugby Football League, for the 1988/9 season, while he also became Chairman of the Rugby League Coaching Committee.

Off the field, Les was the ultimate gentleman, and was so hugely respected by all.  He always had the utmost time for any individual who wished to speak with him, and the respect which his own players had for him has been evident from the comments that have been received from so many of them.  He was someone who held the best interests of the club at his heart throughout the decades through which he was associated with the Red Devils.  Long after he stepped down from the Board of Directors in 1991, after 34 years of involvement, he was a regular attender at Salford’s home games for at least another 15 years before ill health laid him low.

Sadly, Les passed away, peacefully, on the morning of 9th September, after a lengthy illness, and with his passing, Salford have lost a champion and friend of the club, the likes of whom are so few and far between.  One material thing he has left us, however, are his own personal insights into the game he held so dear, in the form of two books, of which he was author: ‘The Rugby league Coach’ (1986), and ‘In The Lions’ Den’ (1991).