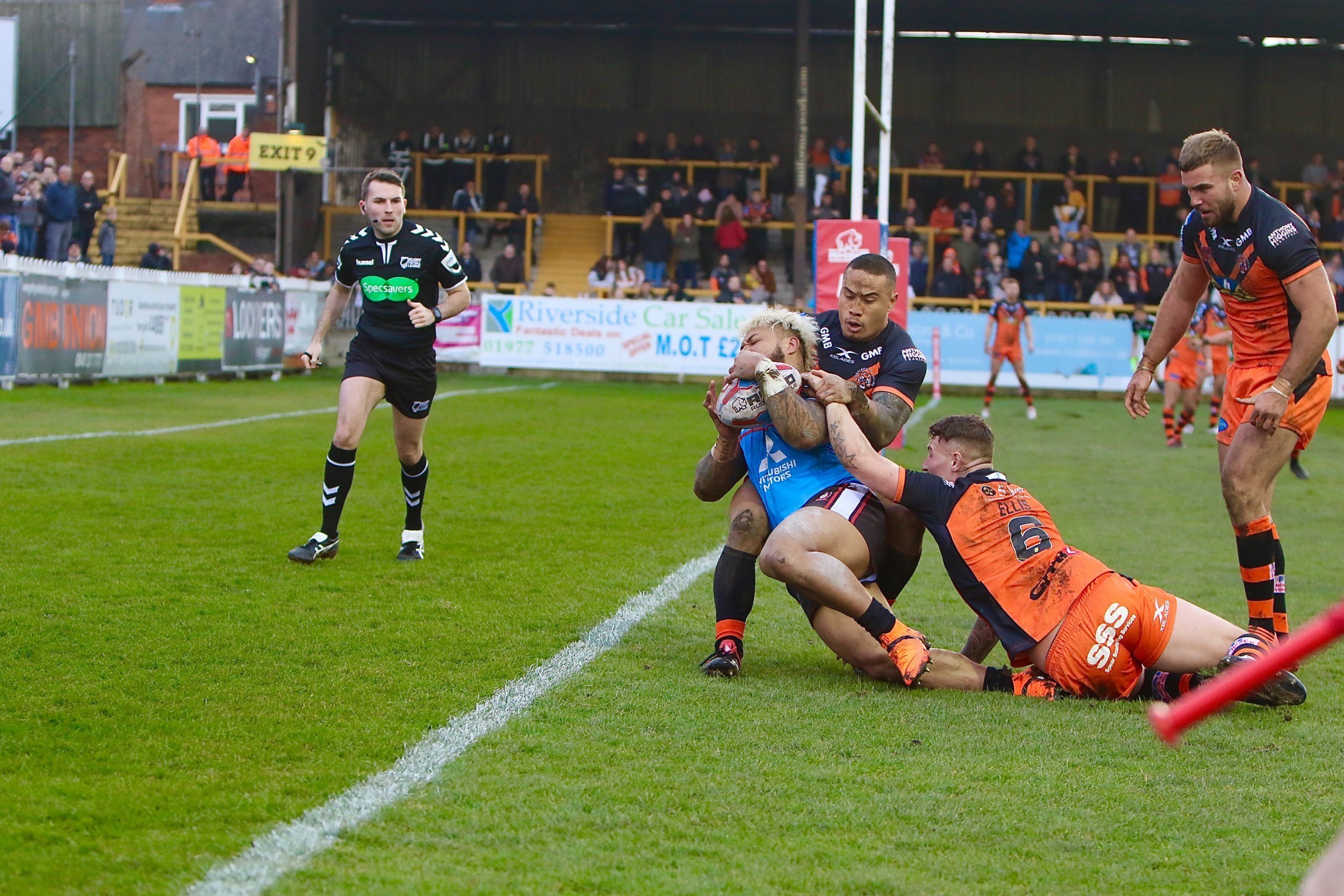 Salford Red Devils crashed to a second successive Betfred Super League defeat as Castleford Tigers ran out 22-8 winners at the Mend-A-Hose Jungle.
Tries from Junior Sa’u and Jake Bibby were mere consolations for The Red Devils as efforts from Michael Shenton, James Clare and Luke Gale secured the points for the hosts.
The Tigers dominated from the off and their early pressure paid dividends just five minutes into the contest when Luke Gale’s quick pass allowed Michael Shenton to exploit an opening in the Salford backline and power over in the left hand corner, Gale successfully converted the extras.
Things quickly worsened for Salford, a low kick caused Jake Bibby to lose his footing and as the winger attempted to retrieve the ball it ricocheted into the in-goal area before James Clare touched down, Gale again kicked the resulting goal.
Castleford were temporarily reduced to 12 men in the 16th minute of the tie when Referee Liam Moore sin-binned Oliver Holmes for dropping Tyrone McCarthy on his head during a tackle.
However just minutes later, Daryl Powell’s side extended their lead further as Luke Gale landed a penalty in front of the sticks to leave the score at 14-0.
Salford struggled to build any momentum for the majority of the opening period, Castleford were convinced to have scored their third try of the day, however Greg Mikin was adjudged to have been held up in-goal.
The Tigers weren’t to be denied for long though, Gale’s looping kick caused mayhem amongst the Salford defence and the half-back latched onto the loose ball to cross over, Gale then kicked the extras in what was the final point-scoring action of the half.
Salford’s perseverance finally paid off 11 minutes into the second period as some quick hands from Mark Flanagan and Jack Littlejohn forged an opening for Junior S’au to sprint ten metres and score, however Robert Lui was unable to convert the resulting goal.
With less than twenty minutes, Logan Tomkins and Grant Millington were both cautioned for a clash between the pair that resulted in a penalty for Cas – Gale kicked at goal to add a further two points to his side’s lead.
Salford were unfortunate not to have reduced the deficit during the half, Lama Tasi and Weller Hauraki were both close to crossing over in separate sets, although the pair were held up on each occasion.
Gale attempted a late drop goal to rub salt into any Red Devil wounds, though his effort landed well wide of the sticks.
Salford had the final say however as quick hands from both Hauraki and Niall Evalds enabled Jake Bibby to produce an emphatic finish in the right-hand corner and claim a consolation try for The Red Devils, Jack Littlejohn saw his conversion effort land wide seconds before the final hooter.
Salford Lineup: Evalds, Bibby, Welham, Sa’u, Johnson, Lui, Littlejohn, Griffin, Wood, Burgess, Jones, Hauraki, McCarthy
Interchanges:Tomkins, Tasi, Nakubuwai, Flanagan
Castleford Lineup: Roberts, Minkin, Webster, Shenton, Clare, Ellis, Gale, Massey, McShane, Millington, Holmes, McMeeken, Foster
Interchanges: Milner, Cook, Sene-Lefao, Green
Salford Scorers: Tries- Sa’u (51’), Bibby (79’)
Goals- N/A
Castleford Scorers: Tries- Shenton (5’), Clare (12’), Gale (30’)
Goals- Gale (6’, 13’, 19’, 31’, 63’)
Man of the Match: Junior Sa’u
Referee: Liam Moore
Touch Judges: T. Crashley, J. Roberts
Attendance: 7,480