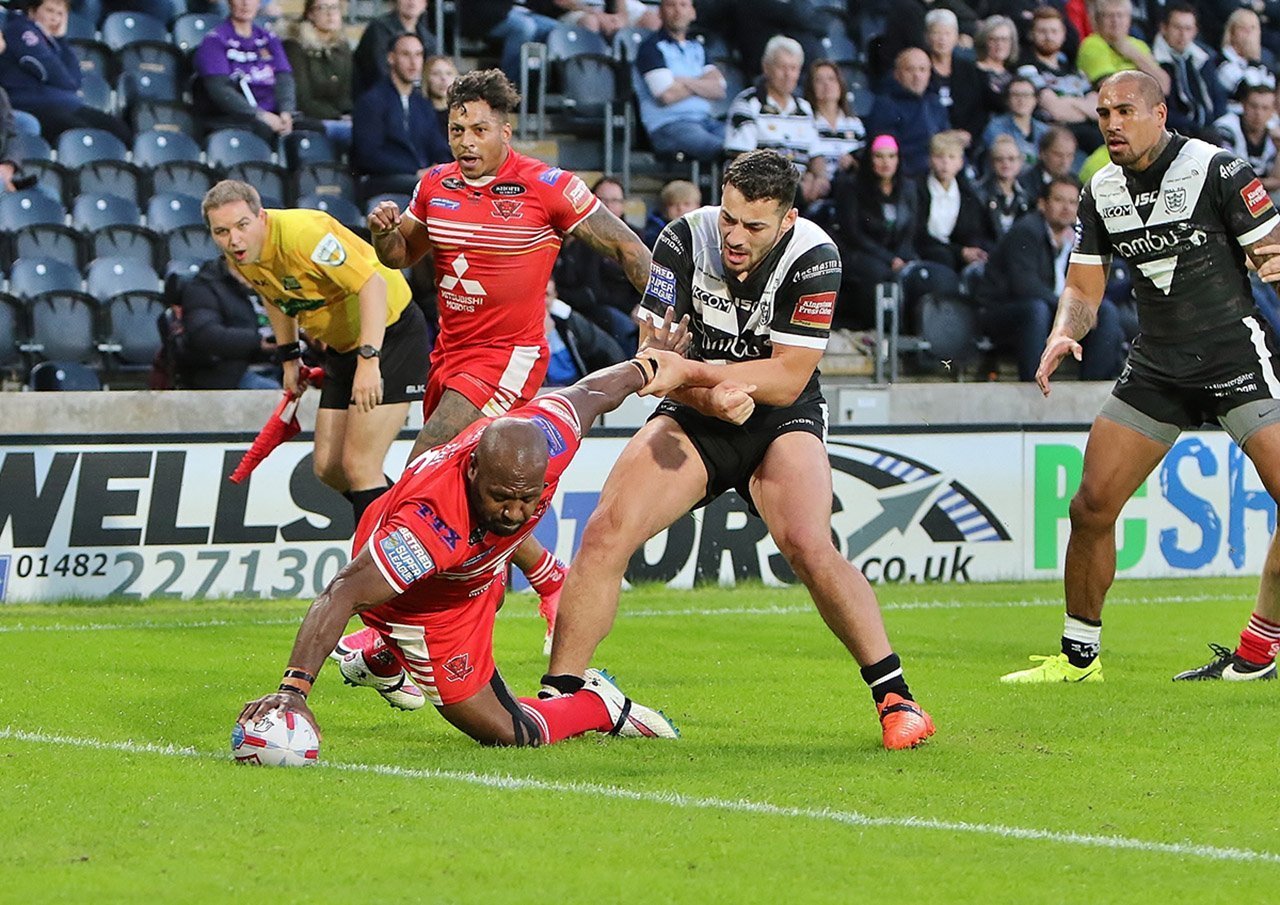 Salford Red Devils suffered defeat in their Super 8s opener against Challenge Cup finalists Hull FC at the KCOM Stadium.
Three unanswered tries in the opening twenty minutes of the second half put the game out of Salford’s reach after the Red Devils had gone into half-time level with Lee Radford’s men.
Ian Watson’s side outscored FC in the first half three tries to two, but in the second half the Black and Whites were just too strong for the Red Devils.
Robert Lui returned to the Salford side in place of Michael Dobson while Jake Bibby took Junior Sa’u’s place in the centres. Marc Sneyd and Mark Minichello missed out for the hosts.
The Red Devils got off to the perfect start forcing a goal-line dropout from the kick-off and it wasn’t long before they opened the scoring through one of their newest acquisitions – Manu Vatuvei.
‘The Beast’ made the original break skittling three Hull defenders before earning a penalty. Some good work from Jake Bibby gave Vatuvei an opening out wide and the former New Zealand international crossed for his first Salford try.
However, Hull hit back almost immediately as half-back Albert Kelly slid through the Salford defence. Just two minutes later the hosts added another as the ball went through hands before Carlos Tuimavave finished well. Jake Connor converted both.
Watson’s men didn’t lie down and a moment of brilliance from full-back Niall Evalds brought them back into touching distance. Evalds sliced through the Hull line before racing sixty metres jinking in and out and crossing for a sensational solo effort.
A returning Lui was settling into the game well and made his presence felt when he forced a knock-on from Mahe Fonua before burrowing his way over from close-range to regain the lead for Salford. Lui converted, after taking over the kicking duties from Carney, but a Connor penalty on the half-time hooter meant the sides went into the break level.
Unfortunately for the Red Devils, Hull came out of the blocks quickly in the second half scoring two tries in the opening seven minutes. Fetuli Talanoa rose highest to latch onto a Connor chip to put FC in the lead before Connor himself powered over from close-range. Connor maintained his 100% record with the boot.
Tuimavave hit the ball at pace and went through a gap in the Salford defence midway through the second half to put the game out of reach for the Red Devils. But, Vatuvei did manage to score his second of the afternoon in the final fifteen minutes. Some quick hands out wide allowed the Kiwi to bulldoze his way over. Lui’s conversion attempt was unsuccessful.
Hull FC: Shaul, Fonua, Griffin, Tuimavave, Talanoa; Kelly, Connor; Taylor, Houghton, Watts, Manu, Washbrook, Ellis.
Interchanges: Green, Michaels, Thompson, Fash.
Red Devils: Evalds, Vatuvei, Bibby, Welham, Johnson; Lui, Carney; Walne, Tomkins, Hauraki, McCarthy, Jones, Krasniqi.
Interchanges: O’Brien, Kopczak, Griffin, Murdoch-Masila.
Referee: Mr. J. Smith. Touch Judges: Mr. P. Brooke & Mr. A. Tolley. Attendance: 10,239.