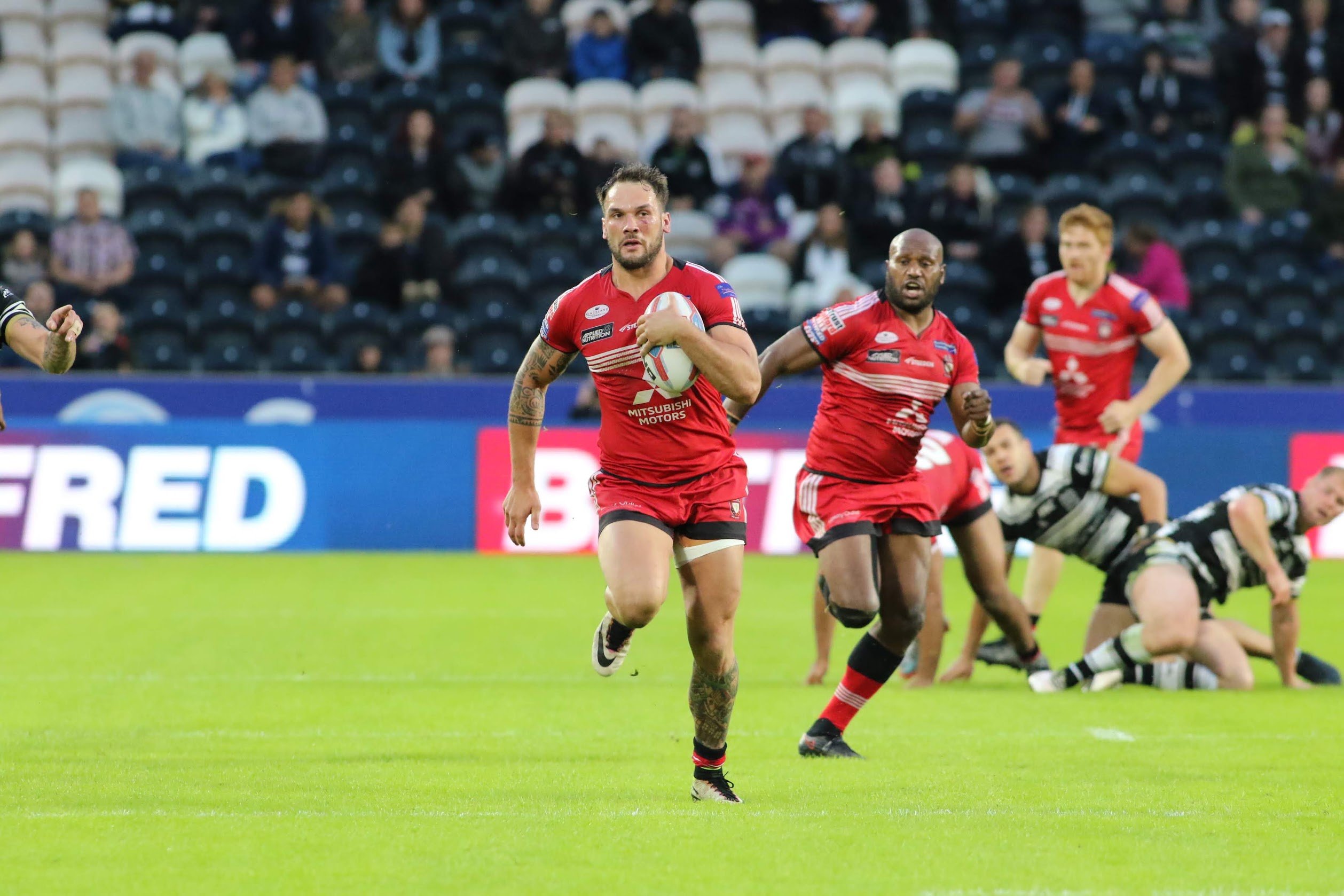 Salford Red Devils succumbed to a 45-14 defeat as Hull FC ran out comfortable winners on a frustrating evening at the KCOM Stadium.
Although the Red Devils managed to conjure up three second-half scores through Greg Johnson, Derrell Olpherts and George Griffin, Salford still fell short as the hosts claimed a deserved victory.
Bureta Faraimo’s hat-trick alongside further tries from Jack Downs, Jack Logan, Hakim Miloudi and Jamie Shaul ensured Lee Radford’s side secured two pivotal points.
The hosts made a flying start to the contest and opened the scoring with just five minutes on the clock. After the ball was worked out wide, Faraimo stepped inside before holding off Greg Johnson and diving over.
Jake Connor kicked the first of nine goals and the Black & Whites crossed over again just six minutes later. Faraimo grabbed his second after intercepting Robert Lui’s lofted pass before sprinting the length of the field and touching down.
Hull began to take full control and managed to add two more tries in quick succession. First, Downs slid over the whitewash after a clever offload from Logan before the latter turned from provider to scorer after an excellent break from Jamie Shaul.
Things worsened for the Red Devils as Miloudi flew out of the line to intercept a wayward pass from Jack Littlejohn before racing 50m to score in what was a carbon copy of Faraimo’s individual effort.
Connor then added the resulting goal and a late drop-goal to rub salt further into the wounds.
Faraimo then turned provider after kicking inside to Shaul who made no mistake to touch down and cap off a fine first-half display.
The hosts picked up where they left off after the break as Faraimo completed his hat-trick after wriggling out of Greg Johnson’s tackle.
Johnson was to have the last laugh though as the winger touched down after collecting a cut-out pass from Jake Shorrocks.
Robert Lui added the extras as Salford began to grow in confidence and Ian Watson’s side soon found themselves over again as Derrell Olpherts finished off a well worked move to restore some pride to the camp.
Salford battled throughout the second period and their efforts were rewarded further as Lui played a flat ball to Griffin and the forward surged over the line from close-range.
Hull had the final say however as Connor slotted home a penalty on the hooter to wrap up proceedings.
Hull Lineup: Shaul, Faraimo, Logan, Tuimavave, Miloudi, Connor, Harris, Taylor, Washbrook, Green, Downs, Minichiello, Westerman.
Interchanges: Fash, Litten, Paea, Matongo.
Salford Lineup: Littlejohn, Johnson, Welham, Sa’u, Olpherts, Lui, Shorrocks, Tasi, Tomkins, Mossop, Griffin, Jones, Flanagan.
Interchanges: Kopczak, McCarthy, Nakubuwai, Wood.