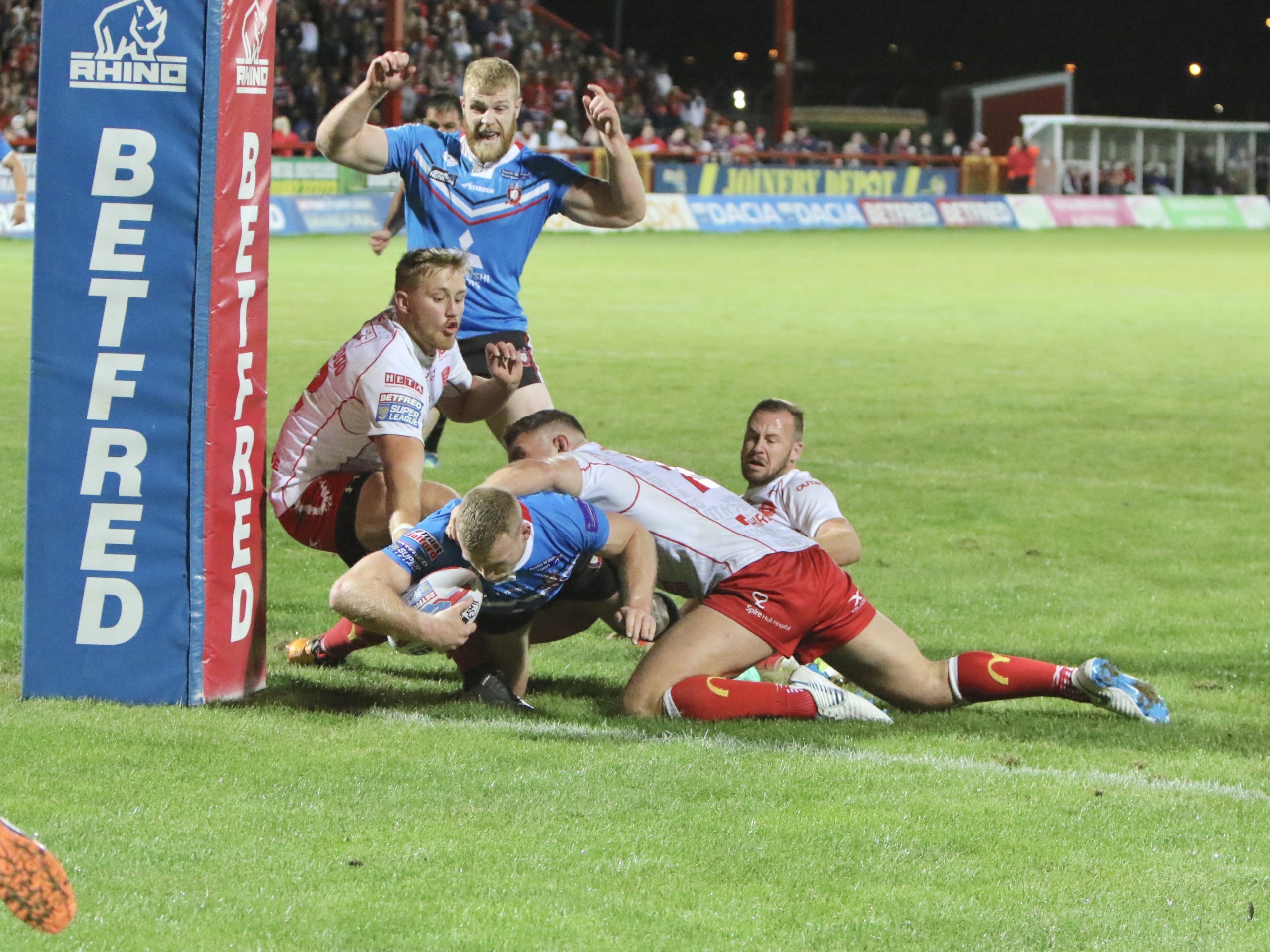 Salford Red Devils kickstarted their Qualifiers campaign in emphatic fashion after securing a spectacular 10-28 victory over Hull Kingston Rovers, on a drizzly evening at KCOM Craven Park.
Tries from Niall Evalds, Robert Lui, debutant Joey Lussick and Josh Wood ensured Ian Watson’s side got off to a flyer in the seven-game competition to earn two crucial points and a second-successive triumph.
Salford had a glorious chance to take the lead in the 6th minute of the half when Jackson Hastings was taken high. The Red Devils opted to kick at goal, but Ed Chamberlain’s penalty effort landed wide of the mark.
Both sides struggled to mount any real momentum in the early stages, first Junior Vaivai gifted Salford with an opportunity to score after failing to deal with Lui’s high kick, before Lee Mossop then squandered the chance from the resulting set after knocking on.
The visitors weren’t to be denied for long though, Adam Quinlan was penalised for pushing at the play-the-ball. Salford again chose to kick at goal but this time, Chamberlain comfortably slotted the ball over.
Salford frequently broke from deep throughout the half and this tactic finally paid dividends a minute later when Mark Flanagan collected a short ball from Lui, before piercing through the Rovers line and expertly releasing the onrushing Evalds to give the Reds a six-point lead.
Chamberlain was unsuccessful from the subsequent conversion and things almost worsened for Salford when James Donaldson went crashing over from dummy half. However, the forward dropped the ball at the crucial moment.
Soon after, Rovers’ efforts finally paid dividends as Junior Sa’u failed to contain Quinlan in the tackle and the full-back acted quickly to find Craig Hall in the corner with a cleverly weighted kick.
Salford responded brilliantly and were soon denied a score of their own when Jake Bibby dived over in the corner, only for the try to be chalked off following a forward pass from Chamberlain.
After the break, the Red Devils picked up where they left off when Ryan Lannon earned a penalty after being held down in the tackle. Hastings took over goal-kicking duties and comfortably added another two points to extend the margin to four points.
In what proved to be a tight affair throughout, a moment of brilliance was required for Salford to break away from the Robins and 15 minutes into the half, half-back Lui duly provided it.
After former Swinton man Chris Atkin threw a wayward pass, Lui pounced to intercept the loose ball before racing ninety metres to cross for a stunning solo effort under the posts.
Hastings added his second goal of the evening, but it was another new recruit who was to dominate the headlines this time out. Lussick – who was making his debut for the club after arriving a fortnight ago from Australia – claimed his maiden try in Salford colours after spotting a gap in the KR backline to dive over from dummy half.
Half-back Hastings then landed two more goals – the second a penalty after Evalds was pulled back off the ball – but the hosts responded with a consolation try when Shaun Lunt barged his way over from close-range.
Despite the slight resurgence from Rovers, Salford weren’t to be halted for long as Wood remarkably ducked under Nick Scruton and Ben Kavanagh, before flinging himself over the whitewash to round-off a dominant performance.
Hull KR Lineup: Quinlan; Oakes, Crooks, Vaivai, Hall; Carney, McGuire; Scruton, Lunt, Mulhern, Tickle, Tomkins, Clarkson.
Interchanges: Greenwood, Kavanagh, Donaldson, Atkin.
Salford Lineup: Evalds; Bibby, Chamberlain, Sa’u, Olpherts; Lui, Hastings; Mossop, Wood, Murray, Jones, McCarthy, Lannon.
Interchanges: Lussick, Flanagan, Tasi, Nakubuwai.
Hull KR Scorers: Tries- Hall (32’), Lunt (73’) | Goals- Tickle (74’)
Salford Scorers: Tries- Evalds (20’), Lui (55’), Lussick 66’, Wood 78’ | Goals- Chamberlain (19’) Hastings (49’, 56’, 67’,70’, 79′)
Half-Time Score: 4-6
Man of the Match: Joey Lussick.
Referee: Robert Hicks.