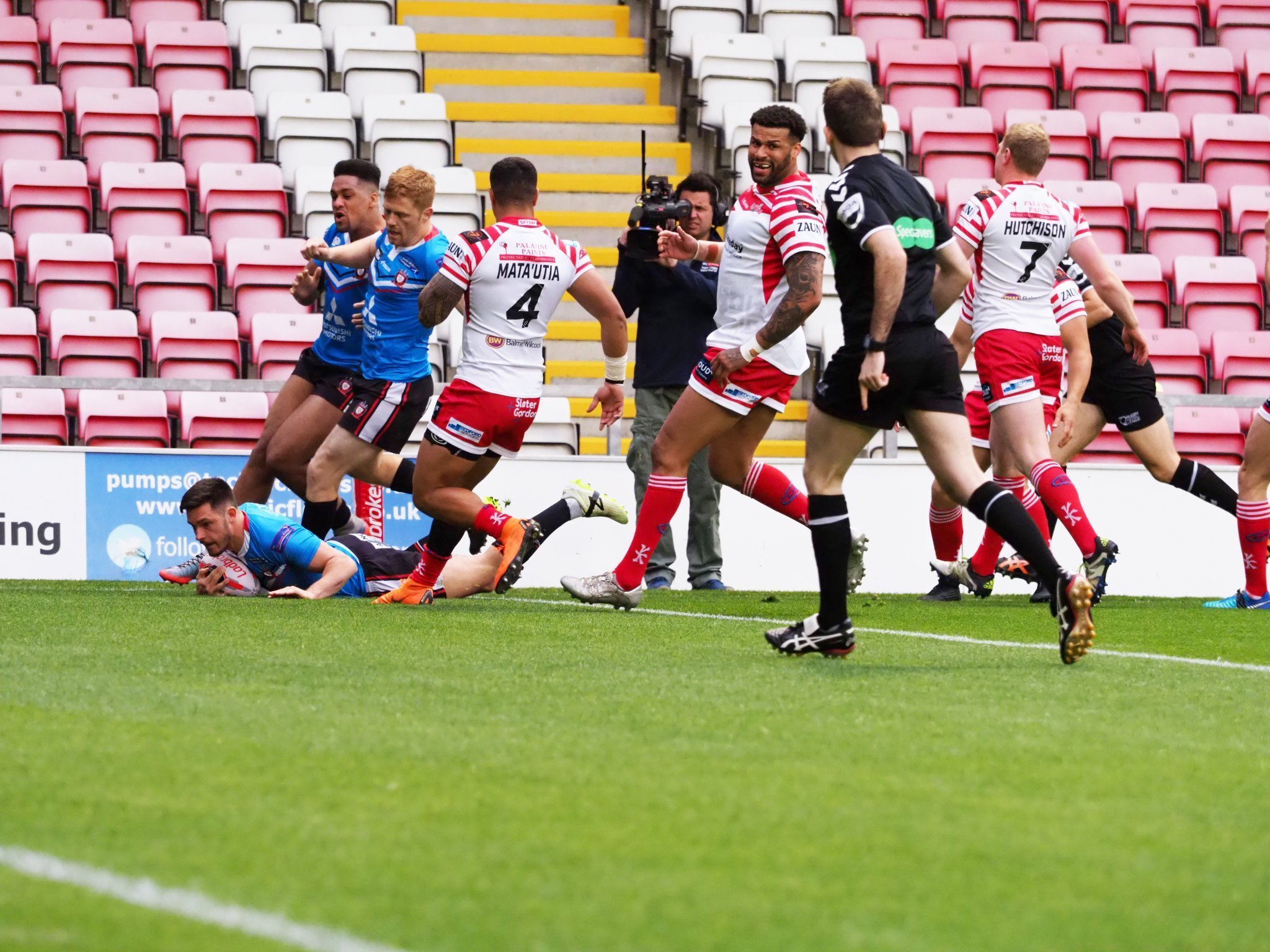 Salford Red Devils bowed out of the Ladbrokes Challenge Cup at the first attempt as Leigh Centurions ran out 22-10 winners on a frustrating evening at the Leigh Sports Village.
Despite first half efforts from Niall Evalds and George Griffin, Salford ultimately fell short as tries from Ben Reynolds, Harrison Hansen, Daniel Mortimer and Drew Hutchinson ensured the Leythers advanced to the Quarter-Finals of the famous old trophy.
Salford headed into the game following last week’s 30-0 defeat at Wigan, but the Red Devils made the perfect start this time around as some quick hands from Jake Shorrocks and Jack Littlejohn forged an opening for the onrushing Niall Evalds who threw a quick dummy and dived over the line.
Shorrocks failed to land the subsequent conversion but Salford were over again just over ten minutes later. This time, on-loan Wigan half-back Shorrocks cleverly picked out George Griffin with a short ball and the forward pummelled his way through three Leigh defenders to surge over the line before Shorrocks added the extras.
The visitors’ dominance was short-lived however as Peter Mata’utia jinked inside the Salford line before flicking inside to Ben Reynolds who crossed under the sticks before converting his own effort.
Reynold’s score seemed to spur the hosts on and they were in again just two minutes later as former Salford man Harrison Hansen shuck off several opposition defenders before spinning over the line.
Half-back Reynolds then added the resulting goal to turn the game on its head as the Leythers headed into the interval in full control.
Leigh picked up where they left off after the break and were unfortunate not to have scored as Drew Hutchinson headed for the line, but his score was chalked off after a last-ditch tackle from Littlejohn held the half-back up.
The hosts weren’t to be denied for long though as Daniel Mortimer bulldozed over from the following set before Reynolds added his third goal to increase the margin separating the sides to 8 points.
Salford regrouped in the hope of forging a formidable comeback but a combination of a forward pass from Evalds and some excellent defence prevented Derrell Olpherts from finishing in the right-hand corner –  a move that reflected a highly frustrating evening for the Red Devils.
Unfortunately for Salford, things worsened three minutes from time as Hutchinson danced through the visiting line to claim a deserved try and complete the scoring.
Leigh Lineup: Mata’utia, Dawson-Jones, Crooks, Hall, Owens, Reynolds, Hutchinson, Bailey, Higham, Acton, Hansen, B.Thompson, J.Thompson.
Interchanges: Mortimer, Larroyer, Richards, Dezaria.
Salford Lineup: Evalds, Olpherts, Welham, Sa’u, Johnson, Shorrocks, Littlejohn, Nakubuwai, Tomkins, Mossop, Hauraki, Griffin, Flanagan.
Interchanges: Wood, Tasi, McCarthy, Kopczak.