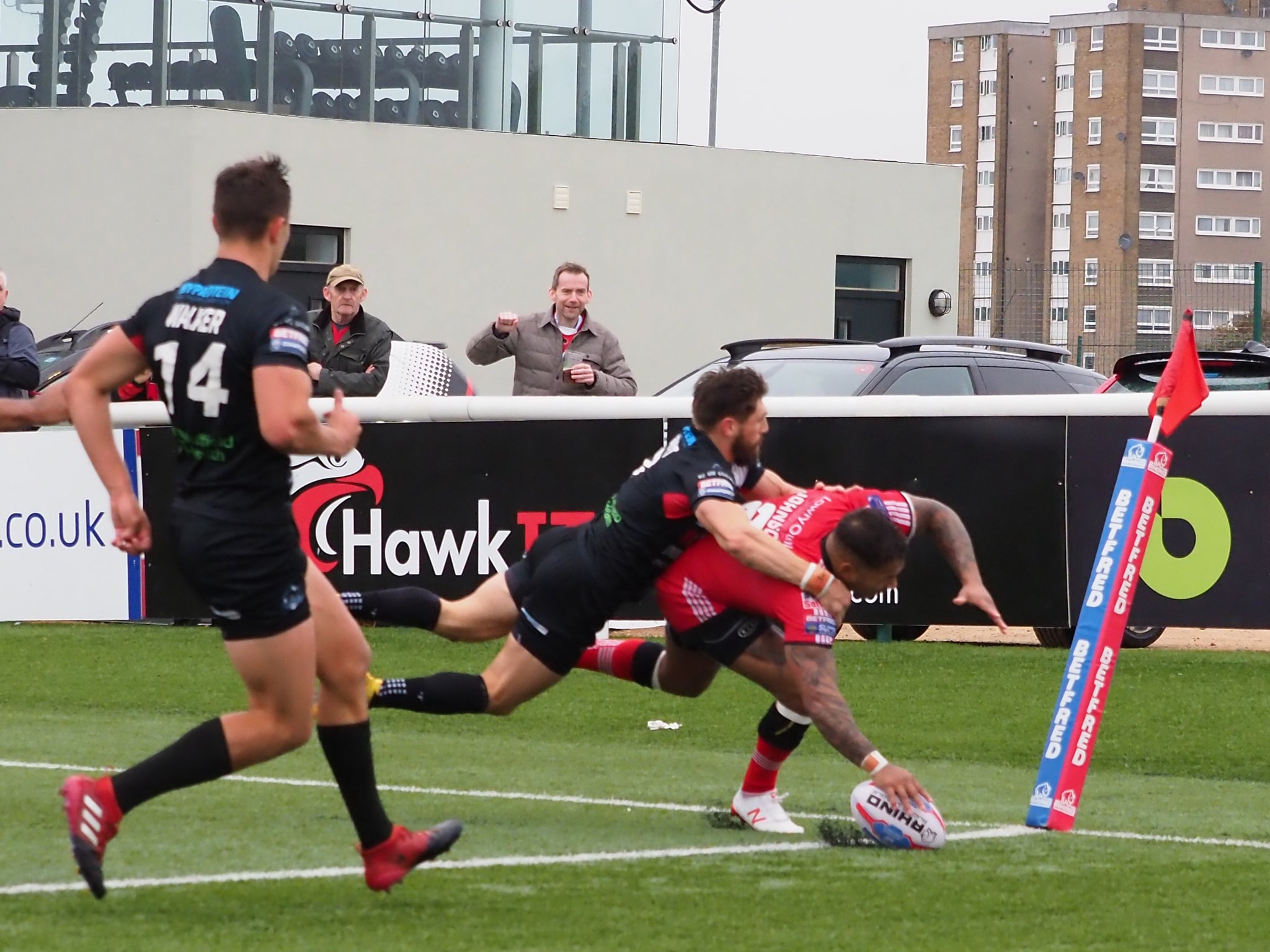 Salford fell to a disappointing 11-8 defeat to London Broncos at Ealing Trailfinders which means the Red Devils’ Super League status for 2019 remains unconfirmed.
London’s Jay Pitts grabbed the only try of the first half alongside a conversion, penalty goal and drop-goal from Jarrod Sammut. Winger Greg Johnson went over twice in the second half however missed conversions alongside another Sammut penalty consigned Salford to defeat.
Both sides had chances in the early stages with Rob Lui almost crossing for Salford while Kieran Dixon was hauled down by Johnson in the early stages. The affair was destined to be a close one from the outset with Sammut all too aware of this as he notched a penalty goal on the ten-minute mark.
It was just three minutes later when the Broncos furthered their lead. Fellow halfback Pitts looked to be tackled upright just short of the line but managed to fight his way free to open the try-scoring for the afternoon. Sammut converted.
Referee Scott Mikalauskas was penalising both sides at a frequent rate in the opening twenty minutes leading to the hosts being handed a team warning. Just two tackles later forward Eddie Battye would strip the ball from Ryan Lannon and be sent to the sin-bin for ten minutes.
However, the Red Devils couldn’t capitalise with the extra man. Watson’s side put the ball to ground each time they were on the Broncos line. In fact, it was London who scored in this period when Sammut broke free following an interception and crossed in the corner however referee Mikalauskas pulled play back for an offside.
Sammut – who was central to the Broncos’ performance – kicked a drop-goal with five minutes of the first half remaining to extend their lead.
Things picked up marginally for the Red Devils in the first half with Jansin Turgut causing issues following his arrival while some cracks began to appear in the Broncos defence out wide.
Salford managed to get themselves on the scoresheet just prior to the hour-mark as a flowing move wide involving Mark Flanagan, Jack Littlejohn and Kris Welham eventually found Johnson who finished in the corner. Joey Lussick – in absence of Ed Chamberlain who was off the field with a head injury – took the shot at goal but his effort went wide.
The Red Devils continued to push forward, and they had moments of joy down the left-hand flank and a few close calls down the middle as Turgut went through the line but was pulled back for a forward pass from halfback Lui.
However, with five minutes remaining, Sammut notched another penalty goal which extended London’s lead to seven points. Johnson – in almost identical fashion to his first – would score a second of the game with ninety seconds left on the clock. Chamberlain couldn’t add the extras and time got the better of the Red Devils.
London: Walker, Dixon, Hellewell, Kear, Williams; Pitts, Sammut; Evans, Davis, Ioane, Gee, Hindmarsh-Takyi, Battye. Interchanges: Spencer, Butler, Adebiyi, Pelissier.
Salford: Evalds, Johnson, Welham, Chamberlain, Bibby; Lui, Littlejohn; Burke, Lussick, Burgess, Jones, McCarthy, Lannon. Interchanges: Flanagan, Nakubuwai, Kopczak, Turgut.
London Tries: Pitts (13’). London Conversions: Sammut (10’, 14’, 75’). London Drop-Goals: Sammut (34’).
Salford Tries: Johnson (57’, 77’). Salford Conversions: N/A.
Referee: Scott Mikalauskas.