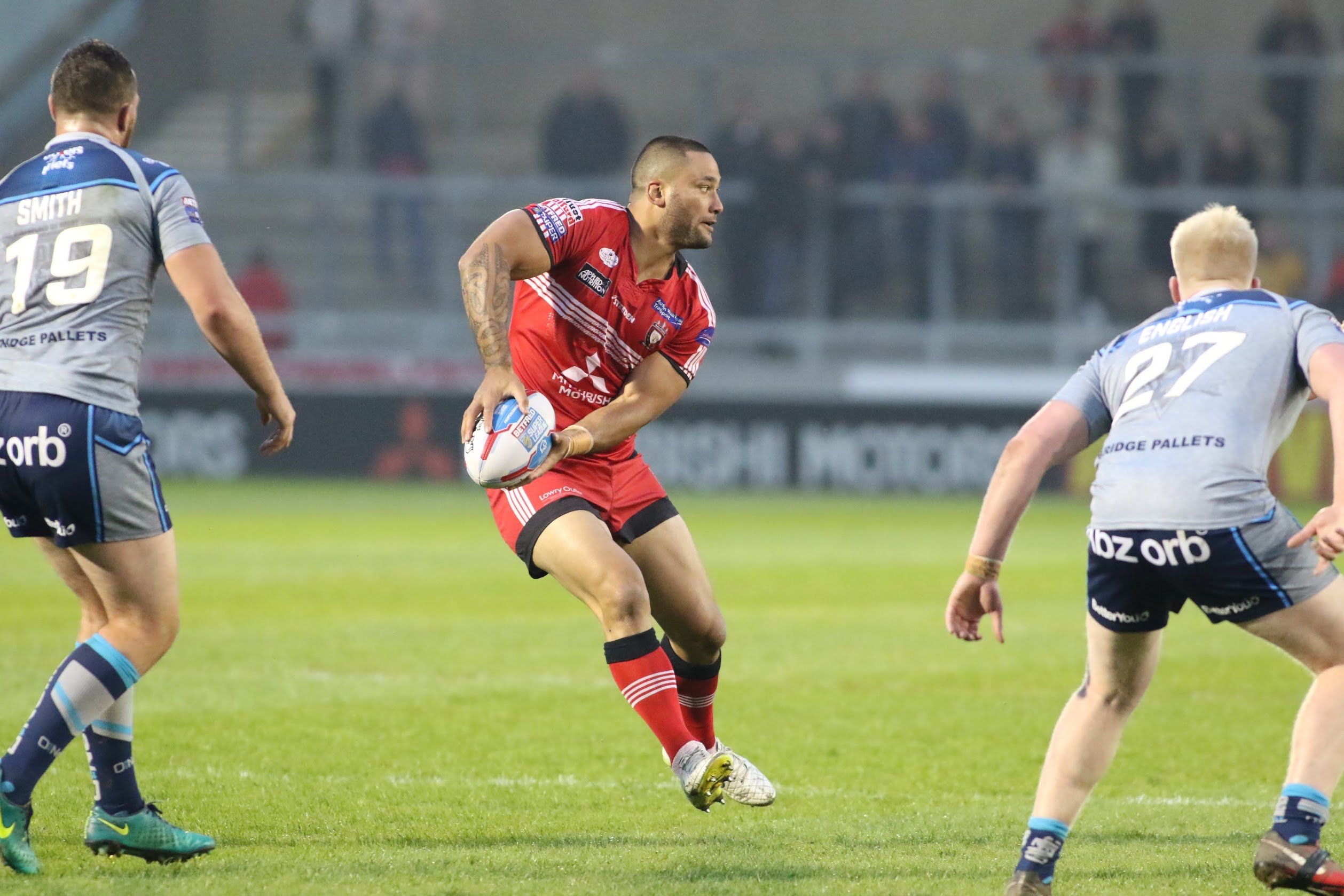 Salford Red Devils fell to defeat as Huddersfield Giants came from behind to snatch a 24-16 victory on a frustrating evening at the AJ Bell Stadium.
Despite a brace from Junior Sa’u and a further score from Niall Evalds, tries from Darnell McIntosh, Daniel Smith, Jordan Turner and Kruise Leeming ensured the visitors ran out deserved winners.
The Red Devils headed into the contest on the back of a disappointing Magic Weekend defeat five days prior, but they made an emphatic start to this one as some quick hands from Jake Shorrocks and Niall Evalds helped forge the opening for Junior Sa’u to fly over in the left-hand corner.
Robert Lui was unable to land the resulting conversion and things almost turned sour minutes later when Ryan Hinchcliffe latched onto a grubber kick from Lee Gaskell, fortunately for Salford the loose-forward was unable to ground the ball before it fell dead.
Salford almost conceded a try less than two minutes later. This time, a well-worked move from the visitors opened a gap for Jermaine McGillvary to power over but a try-saving tackle from Sa’u put the winger into touch to prevent the score.
Lui wasn’t to miss successive kicks though. After the visitors conceded a needless penalty in front of the sticks, Salford opted to kick at goal and the Australian stand-off comfortably slotted the ball home to increase the lead to 6 points.
The visitors responded though as Jake Mamo’s looping pass caught out a helpless Derrell Olpherts to leave Darnell McIntosh with the simple task of crossing over – Danny Brough failed to level the scores though as his conversion fell well wide of the posts.
Huddersfield did manage to level the scores soon after however as Brough effortlessly slotted a penalty from 30m out to leave the result hanging in the balance.
Despite conceding, Salford weren’t to be undone for long as Niall Evalds claimed a sensational score. Giants full-back Jordan Rankin failed to grasp hold of the ball and Salford man Evalds somehow managed to outwit his opponent to latch onto the loose ball and touch down – Lui again failed to add the extras.
Evalds’ effort seemed to galvanise the Red Devils as a fearsome tackle from Greg Johnson forced McGillvary into a knock-on, just when a try looked a certainty.
The visitors flew out of the blocks after the break and their endeavours paid off twelve minutes into the half as Daniel Smith powered over from close range to level the scoring.
Brough then added the extras to turn the game on its head as Huddersfield grew in confidence.
Things quickly worsened for Salford as Jordan Turner returned to haunt his former club after surging his way past several defenders to score, before Brough landed the resulting goal to give the visitors an eight-point lead.
Huddersfield put the result beyond doubt when Kruise Leeming touched down after producing a sublime dummy before Brough comfortably added the extras.
Salford were to have the final say however as Sa’u bulldozed his way through three Huddersfield defenders to dive over and claim his second of the evening, before Lui landed the resulting drop goal in what proved to be the final point scoring action of the game.
Salford Lineup: Evalds, Johnson, Sa’u, Bibby, Olpherts, Lui, Shorrocks, Mossop, Tomkins, Murray, Griffin, Lannon, Flanagan.
Interchanges: Wood, Kopczak, Hauraki, Nakubuwai.
Huddersfield Lineup: Rankin, McGillvary, Gaskell, Mamo, McIntosh, Turner, Brough, Ta’ai, O’Brien, Clough, Mellor, Roberts, Hinchcliffe.
Interchanges: Leeming, Smith, English, Ikahihifo.