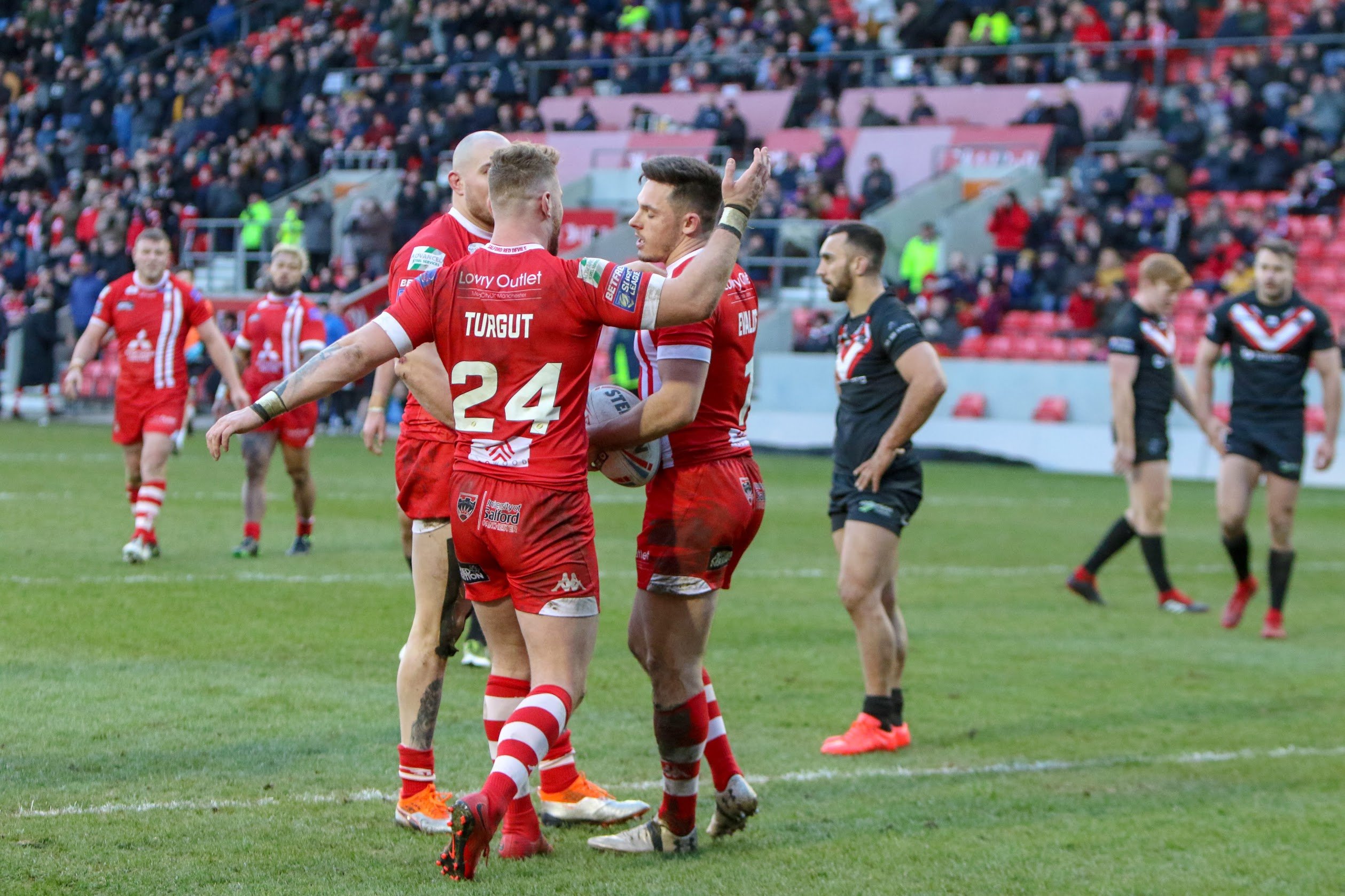 Salford Red Devils earned a hard-fought 24-0 victory over Super League new boys London Broncos which puts Ian Watson’s side atop the table after the second round of fixtures.
The hosts went into the break with a slender 6-0 lead thanks to Ken Sio’s try on his competitive home debut. Salford pulled away in the second half with tries from Jackson Hastings, Niall Evalds and Josh Jones.
A real arm-wrestle ensued for the opening twenty minutes but the Red Devils did have the better of possession and position and it eventually paid dividend when Sio crossed following a neat offload from Jones.
Salford continued to control the first half however failed to add any more points.
But it would take just two minutes of the second half for Salford to extend their lead. Evalds’ low kick came back off the upright and Hastings was the quickest to react getting his tally for the 2019 season underway.
London did apply some pressure to the Salford line, but the Red Devils resilience shone through and Hastings would add a penalty goal in the 55th minute to maintain control.
With ten minutes remaining, Evalds found an opening in the Broncos defence and jinked his way through for his fourth of the season. Hastings would add the extras to all but confirm victory. Salford were reduced to twelve men with five minutes left as Lee Mossop was sent to the sin-bin for an altercation with Greg Richards.
The Red Devils weren’t done however as Jones – who provided the assist for the opener – would get himself on the scoresheet in the final minute. The robust second-rower bounced off two London defenders before planting the ball down to round off a brilliant afternoon at the AJ Bell Stadium.
Salford Red Devils: Evalds, Olpherts, Welham, Sa’u, Sio; Lui, Hastings; Mossop, Lussick, Dudson, Jones, Turgut, Flanagan.
Interchanges: Burke, Nakubuwai, Griffin, Tomkins.
London Broncos: Walker, Dixon, Morgan, Kear, Williams; Abdull, Cunningham; Mason, Fozard, Richards, Pitts, Gee, Yates.
Interchanges: Battye, Ioane, Lovell, Pelissier.
Salford Tries: Sio (20’), Hastings (42’), Evalds (70’), Jones (79’)
Salford Goals: Hastings (21’, 43’, 55’, 71’)
London Tries: N/A.
London Goals: N/A.