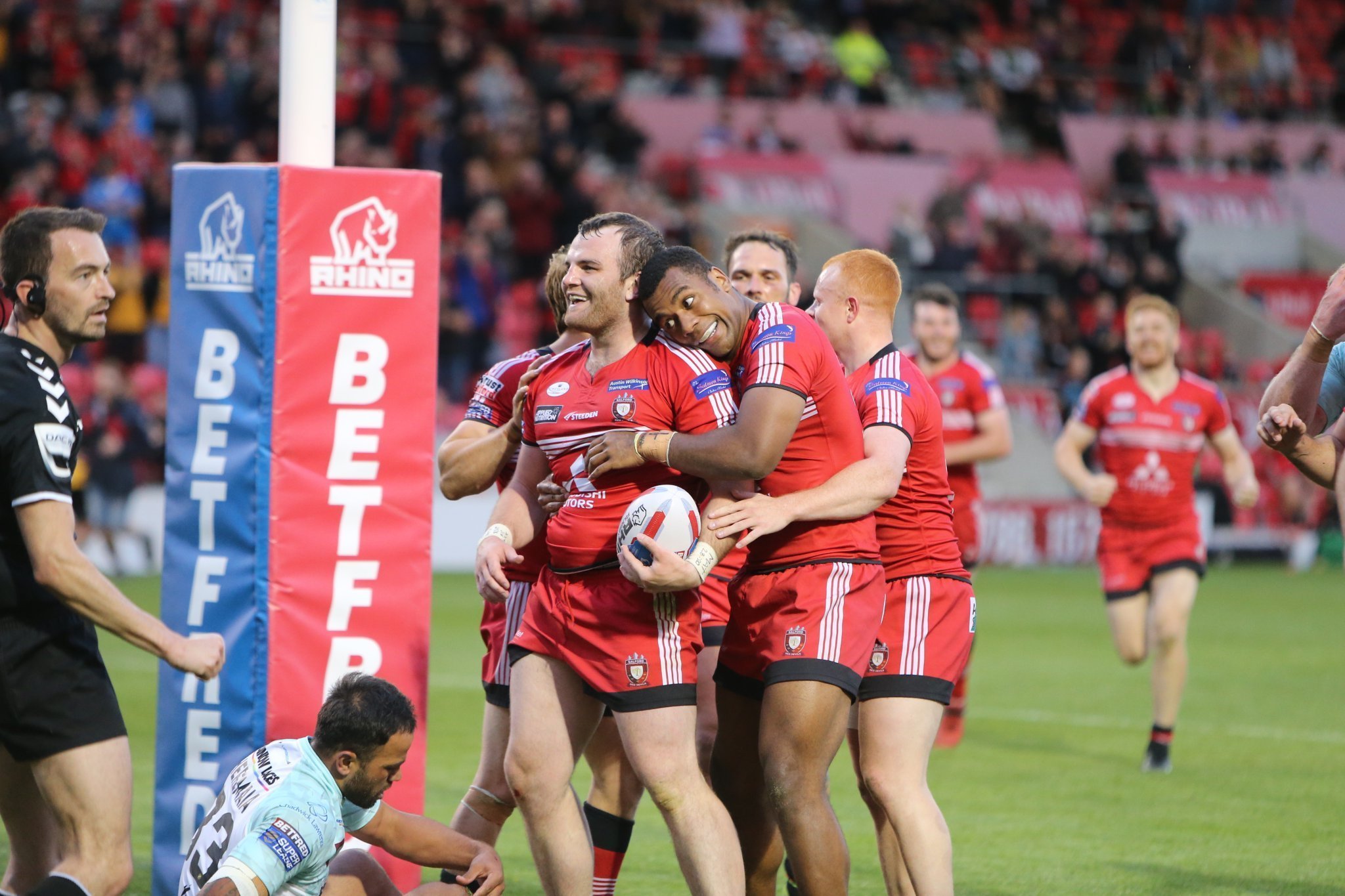 Salford Red Devils returned to winning ways in emphatic fashion after twice coming from behind to earn a crucial 26-12 victory over Widnes Vikings at the AJ Bell Stadium.
Two tries from Kris Welham alongside further scores from Jake Bibby, Robert Lui and on-loan Widnes man Greg Burke helped secure two valuable Betfred Super League points.
The Red Devils headed into the tie on the back of a disappointing defeat at Hull six days prior, and Ian Watson’s men looked on course for another loss this time out when Tom Gilmore dived over in the 5th minute.
Jay Chapelhow’s break helped kickstart the move, before Joe Mellor’s grubber kick bounced over the top of Ryan Lannon to allow Gilmore to ground the ball.
Half-back Gilmore then converted his own effort, but it was Salford who’d score next as Welham blocked Gilmore’s kick with his leg, before reacting quickest to scoop up the loose ball and dart 40m to cross for a stunning individual effort.
Lui’s conversion landed narrowly wide as the hosts grew in frustration. Soon after, Bibby was denied a try as referee James Child chalked the score off following a knock on from Jack Littlejohn.
Salford weren’t to be undone for long though, less than five minutes later Welham grabbed his second, and 150th career try, as some quick hands from Littlejohn and Lui permitted the centre to jink his way over the whitewash.
Unfortunately for Salford, Lui struck the post from his goal attempt and the mood around the AJ Bell dampened quickly as Welham was controversially sent to the sin-bin, before Jake Shorrocks left the field after suffering a suspected fractured jaw.
Less than a minute later, the visitors regained their lead as the heavily involved Gilmore collected a high ball before cleverly picking out the unmarked Patrick Ah Van who had the simple task of touching down.
Gilmore landed the resulting goal in what proved to be the final point scoring action of the half.
Salford have endured a tough time in recent weeks and despite losing another key player, in the form of Tyrone McCarthy through a hamstring injury, the Red Devils dug in and managed to claw themselves back into the tie ten minutes after the break.
After a free-flowing move saw the ball find its way out wide, Littlejohn forged the gap for Bibby to emphatically finish in the right-hand corner.
Lui was unable to convert the resulting goal but Salford weren’t to be denied as Widnes loanee and debutant, Burke, haunted his parent club after collecting a short ball from Logan Tomkins, before surging over under the sticks.
Lui then added the extras and a late penalty to extend Salford’s lead to 8 points before things quickly turned sour for the visiting Vikings.
First, loose-forward Chris Houston was sent to the sin-bin following a high challenge on Burke, before then being shown the red-card for dissent as he left the field.
Salford would have the final say though as Lui charged down a Widnes kick before racing 70m to score and complete a stunning comeback and all-round team performance.
Salford Lineup: Littlejohn, Olpherts, Welham, Sa’u, Bibby, Lui, Shorrocks, Tasi, Wood, Burke, McCarthy, Griffin, Lannon.
Interchanges: Kopczak, Tomkins, Nakubuwai, Chamberlain.
Widnes Lineup: Craven, Ah Van, Runciman, Norman, Ince, Mellor, Gilmore, J. Chapelhow, Johnstone, E. Chapelhow, Whitley, Hauraki, Houston.
Interchanges: Gerrard, Olbison, Heremaia, Farnworth.