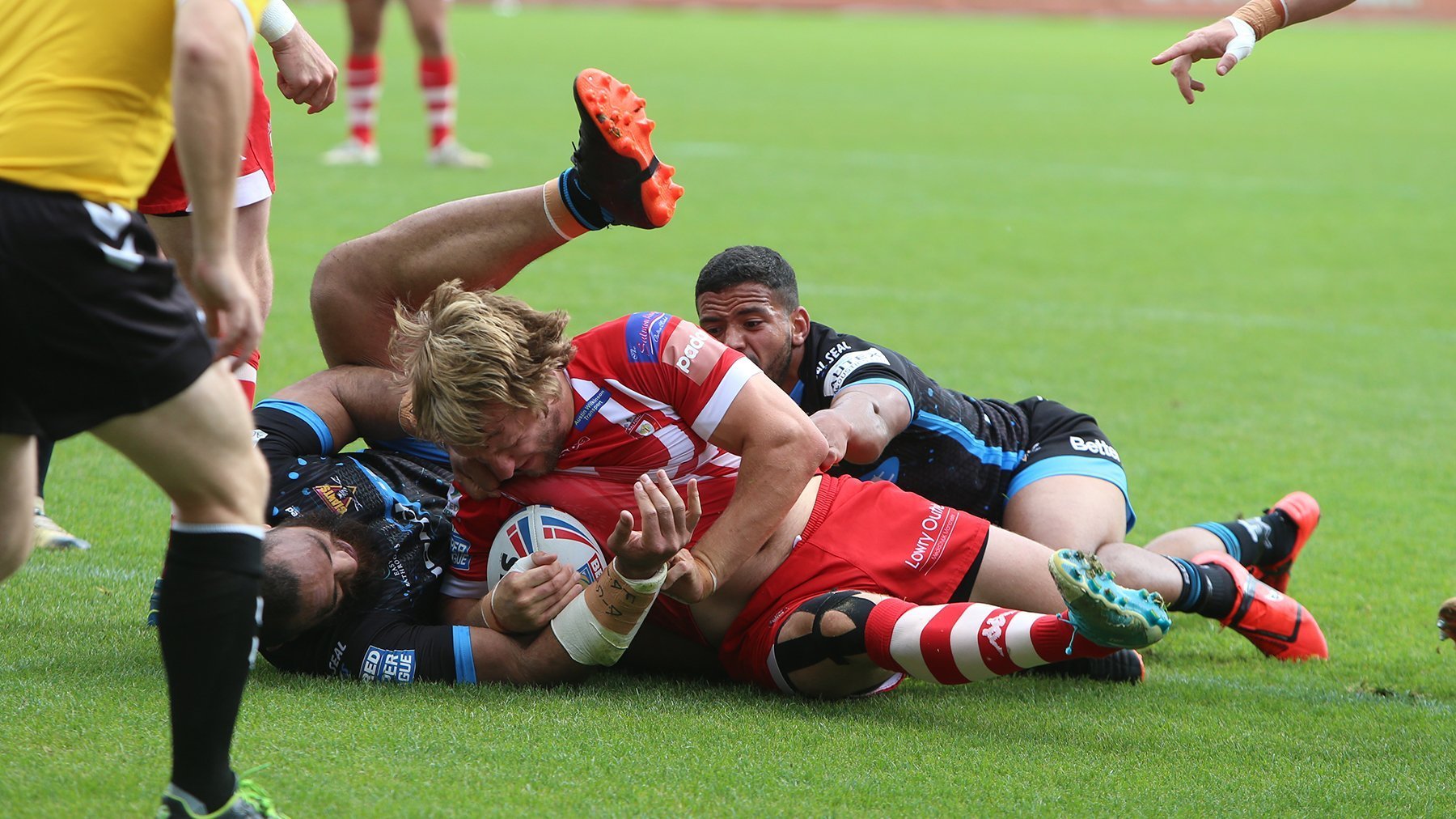 A 20-point haul from Krisnan Inu helped Salford Red Devils move up into the Betfred Super League play-off positions, with a victory over Huddersfield Giants.
In a well fought contest at the Armed Forces celebration, Salford Red Devils were able to secure their fourth consecutive win thanks to tries from Inu, Logan Tomkins, Mark Flanagan, Tui Lolohea.
It was a strong opening 10 minutes from the hosts. The Red Devils kept the visitors camped in their own half, but the only breakthrough came when Inu scored two-points from a penalty.
Salford had their first try of the afternoon when Tomkins took advantage of some more pressure and managed to force his way over the line underneath the sticks.
The Giants hit-back, as Tom Holmes broke through the Red Devils’ defence which lead to a set where Darnell McIntosh was able to score acrobatically in the left corner.
Derrell Olpherts almost set up a try when he brilliantly darted through the Giants defence one minute before half-time. This led to a penalty where Inu was able to slot over for two-points as the half-time hooter went.
Half-time: Salford Red Devils 10-6 Huddersfield Giants
In the 50th minute a brilliant run from McIntosh brought Huddersfield forward and moments later Louis Senior’s low kick was collected by Oliver Russell to put Simon Woolford’s side ahead, 12-10.
A series of stoppages due to injuries really effected the flow of the second-half. It was still all to play for though, as both teams came close to scoring but were continuously stopped by solid defensive work from both sides.
Huddersfield thought they had extended their lead when Wardle grounded a loose ball past the try-line. McIntosh again found space in the left corner, however as he tried to fight through the last Salford man he knocked on.
Kris Welham thought he had put his side back ahead in the 61st minute. He leaped high and brilliantly collected from a kick, but was held up by McIntosh.
In the 66th minute the Red Devils were awarded possession following a Giants knock on and this time were able to break through the Huddersfield defence. Jackson Hastings’ quick pass found Mark Flanagan, who scored right beneath the sticks.
With the hosts being four points ahead. Inu opted for another two-points when Huddersfield conceded a penalty, he calmly converted giving Salford an important six-point cushion.
Ian Watson’s men were awarded another penalty and Inu, who had been brilliant with his kicking, scored yet another two-points as he converted from 40-yards out, putting his side 20-12 ahead.
The game was put beyond any doubt with three minutes left when Niall Evalds broke through the heart of the Huddersfield defence and passed the ball to Tui Lolohea who scored.
In the dying moments of the game, Inu capped off his brilliant performance with a try. The winger cruised over the line to score the last try of the afternoon as Salford moved up to fifth in the Betfred Super League table.
Salford tries: Tomkins (15’), Flanagan (67’), Lolohea (77’), Inu (79’)
Salford goals: Inu (8/8)
Huddersfield tries: McIntosh (32’), Russell (50’)
Huddersfield goals: Russell (2/3)
Salford Red Devils: Evalds, Olpherts, Welham, Bibby, Inu, Lolohea, Hastings, Dudson, Tomkins, Walker, Jones, Lannon, Flanagan, Johnson, Lussick, McCarthy, Mossop.
Catalans Dragons: Gaskell, McGillvary, Senior, Wardle, McIntosh, Russell, Holmes, English, Leeming, Matagi, Wardle, Ta’Ai, Lawrence, O’Brien, Roberts, Wilson, Ikahihifo.
Referee: Marcus Griffiths