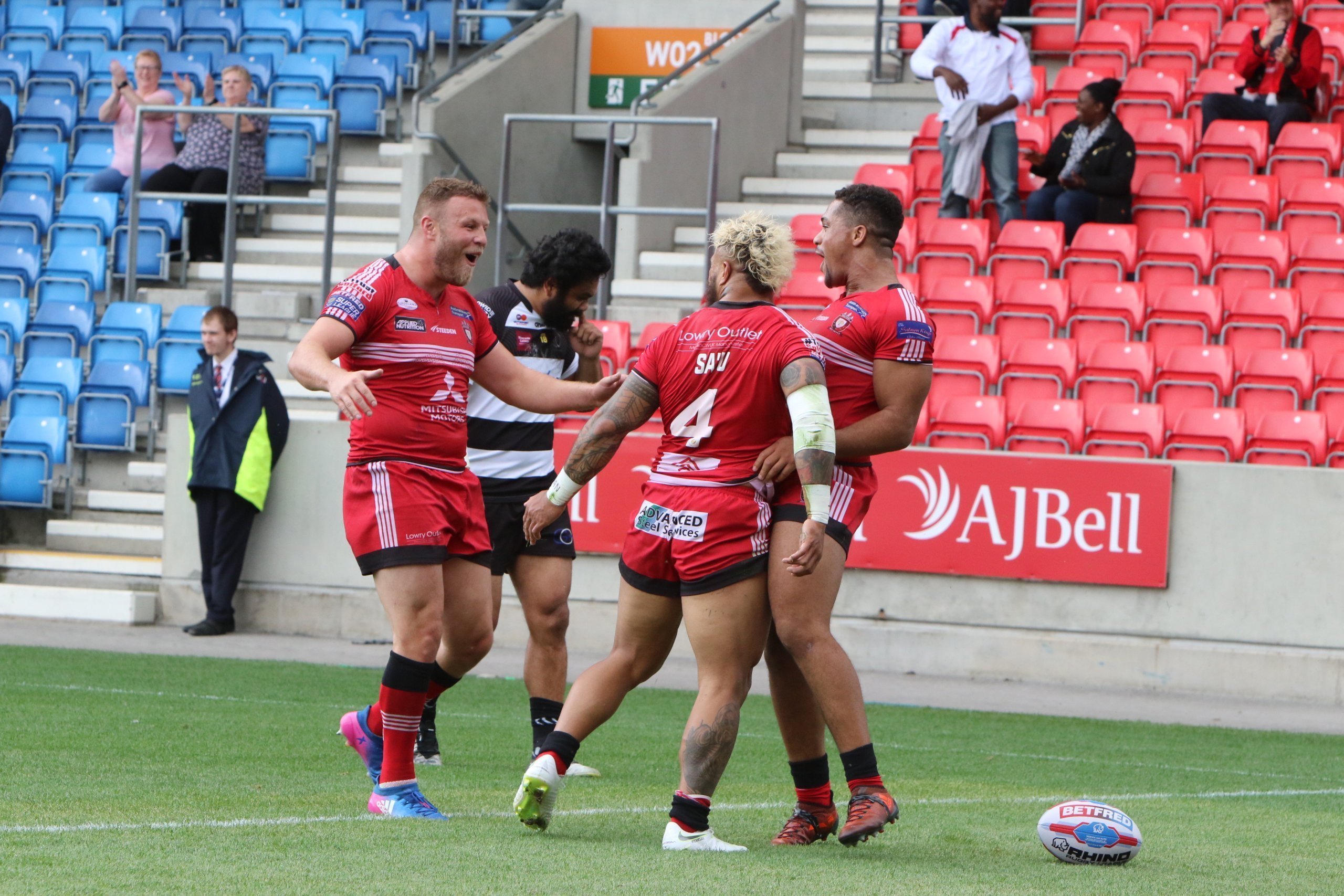 Junior Sa’u’s first-half brace paved the way for Salford Red Devils to earn their third-successive victory, after the Red Devils came from behind to pummel Widnes Vikings 32-6 at the AJ Bell Stadium.
Alongside the centre’s double, scores from Robert Lui, Niall Evalds and Mark Flanagan helped secure a comfortable triumph for Ian Watson’s side.
The Red Devils headed into the contest on the back of an emphatic victory at Hull Kingston Rovers eight days prior, but they made a sluggish start this time around.
A mere three minutes had passed by the time Liam Finn forged the first opening, the veteran half-back’s looping kick caused an array of confusion within the Red Devils line and Charly Runciman scooped up the loose ball, before beating Evalds in a footrace to touch down.
Krisnan Inu added the extras to give the visitors a six-point lead but the Red Devils fought back swiftly.
In recent weeks Salford have enjoyed the luxury of having one of the most expansive half-back pairings around in Jackson Hastings and Lui. The pair were integral in carving Salford’s first score of the afternoon, as some slick hands from the latter sent Sa’u crashing over in the left-hand corner.
Ed Chamberlain nailed the resulting touchline goal, but Salford were in again just four minutes later.
Half-back pairing Hastings and Lui were involved once more, but on this occasion, it was the former who produced the crucial pass to allow Sa’u to cross over in an almost identical fashion.
Sa’u’s double seemed to galvanise Ian Watson’s men, Craig Kopczak – who returned to the side following a short layoff – latched onto a short pass from Hastings before surging towards the line, but the forward was held up in-goal after some heroic defending from Olly Ashall-Bott and Patrick Ah Van.
In a dramatic turn of events, home debutant Joey Lussick was sin-binned by referee Ben Thaler three minutes before the half-time whistle, after the hooker allegedly produced a ‘crusher tackle’.
Despite being a man down, Salford flew out of the blocks after the break. After a sustained spell of pressure saw the Red Devils hound Widnes towards their own line, Lui dummied from the play-the-ball and burrowed his way over to extend the margin.
Soon after, Salford were on the front foot once more. Evalds made an excellent break after Josh Jones intercepted Inu’s wayward pass, but Lloyd White made a remarkable recovery to halt the attack.
However, it was from the kicking tee where the hosts would extend their lead. Aaron Heremaia failed to clear the ruck, consequently allowing Chamberlain to confidently stroke the ball over the posts for his fourth goal of the afternoon.
Hastings’ arrival at the club has sparked a resurgence from fellow half-back Lui. The fifth-eighth has been in inspiring form in recent weeks and he capped off another fine display with 19 minutes left on the clock.
After jinking his way past several Widnes defenders, the 28-year-old produced a stunning offload to assist the onrushing Evalds, before Chamberlain added the extras to increase the lead further.
Salford weren’t finished there though. Watson’s men claimed another stunning try deep into the half, a piece of fantastic link-up play from Man of the Match Hastings and Lussick resulted in the supporting Mark Flanagan sliding over the whitewash, before Chamberlain landed the goal to wrap up a comfortable victory.
Salford Lineup: Evalds; Chamberlain, Welham, Sa’u, Olpherts; Lui, Hastings; Mossop, Wood, Tasi, Jones, Lannon, Flanagan.
Interchanges: Kopczak, Burke, Lussick, Nakubuwai.
Widnes Lineup: Ashall-Bott, Ah Van, Inu, Whitley, Runciman, Mellor, Finn, Hansen, Heremaia, Dudson, Dean, Houston, Hauraki.
Interchanges: Leuluai, Gerrard, Olbison, White.
Salford Scorers: Tries- Sa’u (17, 21’), Lui (45’), Evalds (61’), Flanagan (72’) | Goals- Chamberlain (18’, 22’, 46’, 53’, 62’, 73’
Widnes Scorers: Tries- Runciman (3’) | Goals- Inu (4’)
Salford Sin-Bin: Lussick (37’)
Half-Time Score: 12-6
Man of the Match: Jackson Hastings.
Referee: Ben Thaler.
Touch Judges: Liam Moore & Richard Thompson.
Video Referee: Robert Hicks.