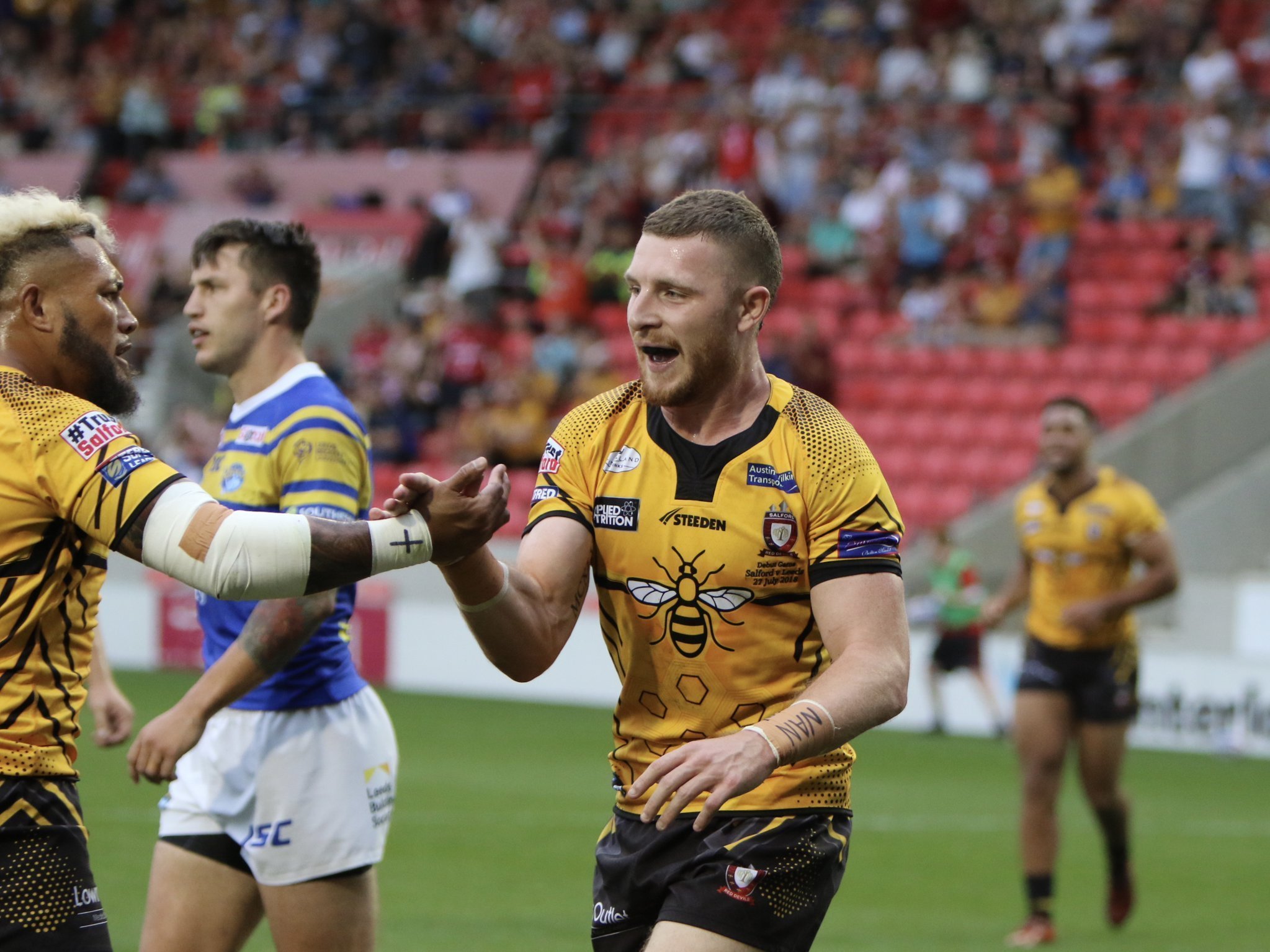 Salford Red Devils returned to winning ways in style after recording a comprehensive 38-22 victory over Leeds Rhinos, despite playing 60 minutes with 12 men on a rain-soaked evening at the AJ Bell Stadium.
Although Ian Watson’s side had a man disadvantage – after Lee Mossop was sent off – for an hour of the tie, Niall Evalds’ brace alongside further scores from debutant Jackson Hastings, Ryan Lannon, Ed Chamberlain, Robert Lui and Josh Jones secured the Red Devils’ biggest ever Super League win over the Rhinos.
Unfortunately for the Devils, it was the visitors who made the brightest start. With just two minutes on the clock, Brad Dwyer powered his way over from close-range before Liam Sutcliffe added the extras to give the visitors a 6-0 lead.
Despite falling behind, Salford responded emphatically and claimed their first score of the evening six minutes later. After some quick hands almost saw Jake Bibby score in the corner, Robert Lui immediately sent Lannon crashing over from close-range.
Ed Chamberlain missed the resulting goal, but Salford were over again soon after. New recruit Hastings – who was making his maiden bow for the club since arriving from Australia two weeks ago – fooled the Rhinos backline with an exquisite dummy, before flicking inside to the onrushing Evalds who slid over the whitewash.
Chamberlain successfully landed his first goal of the night, but Salford weren’t finished there. After making a blistering start to his first appearance in a Salford shirt, Hastings’ evening quickly improved when Lui’s lofted deflected into his path to allow him to dive over for his first score.
Another goal from Chamberlain soon followed and the centre soon turned scorer to claim a try of his own. After the ball was worked out wide, the former Widnes man exploited a gap within the Leeds line before racing 30m to cross over in the corner.
Prior to the clash, Salford had an impeccable disciplinary record. But that soon came running to an end when team captain Mossop was shown the red card after an on-field altercation.
The forward’s exit sparked a Leeds revival as Sutcliffe went crashing over a minute later, before the half-back converted his own effort to leave the scores at 22-12.
The red card didn’t spell the end for Salford’s hard work though, two pieces of excellent defending forced the visitors into successive goal-line drop outs to pile the pressure onto last year’s Grand Final winners.
Salford were hounded in-goal themselves when Josh Wood scooped up the loose ball, but the Red Devils soon regained possession as Lui’s drop goal deceived Jimmy Keinhorst before bouncing into touch.
Salford had the final say of the half when Lui dummied before forcing his way over right on the stroke of half-time.
After the break, Salford initially paid the price for the man advantage. The visitors came close on several occasions, a last-ditch clearance from Chamberlain prevented Ashton Golding from latching onto his own low kick.
The spell of pressure from the Rhinos soon paid dividends when Tom Briscoe finished off a well-worked move on the right-hand side, though Sutcliffe did miss the subsequent conversion.
Mossop’s exit hindered Salford’s attacking game-plan, but it was the Red Devils who’d score next as an error from Golding resulted in Evalds eventually crossing over for his second of the evening.
Salford demonstrated a strong work ethic throughout, and the high level of persistence would result in the next of the score of the contest when Lui spotted an unlikely gap in the Rhinos’ backline, before stabbing the ball through for Jones to leap himself onto.
It was the visitors who’d have the next say though, Golding chipped the ball over the back of the Salford line to allow Matt Parcell to beat Ben Nakubuwai in a foot race before touching down.
Sutcliffe then added the extras to leave the score-line at a more respectable at 38-22, but the result was already beyond any doubt.
Salford now head into the Qualifiers full of confidence after earning a crucial two points at the AJ Bell Stadium.
Salford Lineup: Evalds, Bibby, Chamberlain, Sa’u, Olpherts, Lui, Hastings, Mossop, Wood, Murray, Jones, McCarthy, Lannon.
Interchanges: Bennion, Flanagan, Tasi, Nakubuwai.
Leeds Lineup: Golding, T. Briscoe, Keinhorst, Handley, L. Briscoe, Moon, Sutcliffe, Garbutt, Dwyer, Singleton, Ablett, Thompson, Smith.
Interchanges: Parcell, Peteru, Walters, Crosby.
Salford Scorers: Tries- Lannon (8’), Evalds (10’, 62’), Hastings (15’), Chamberlain (18’), Lui (40’), Jones (69’) | Goals- Chamberlain (11, 16’, 19’, 63’ 70’)
Leeds Scorers: Tries- Dwyer (2’), Sutcliffe (21’), T. Briscoe (55’), Parcell (75’) | Goals- Sutcliffe (3’, 22’, 76)
Half-Time Score: 26-12
Salford Red-Cards: Lee Mossop (20’).
Man of the Match: Robert Lui.
Referee: Tom Grant.
Touch Judges: M. Craven & C. Etchells.