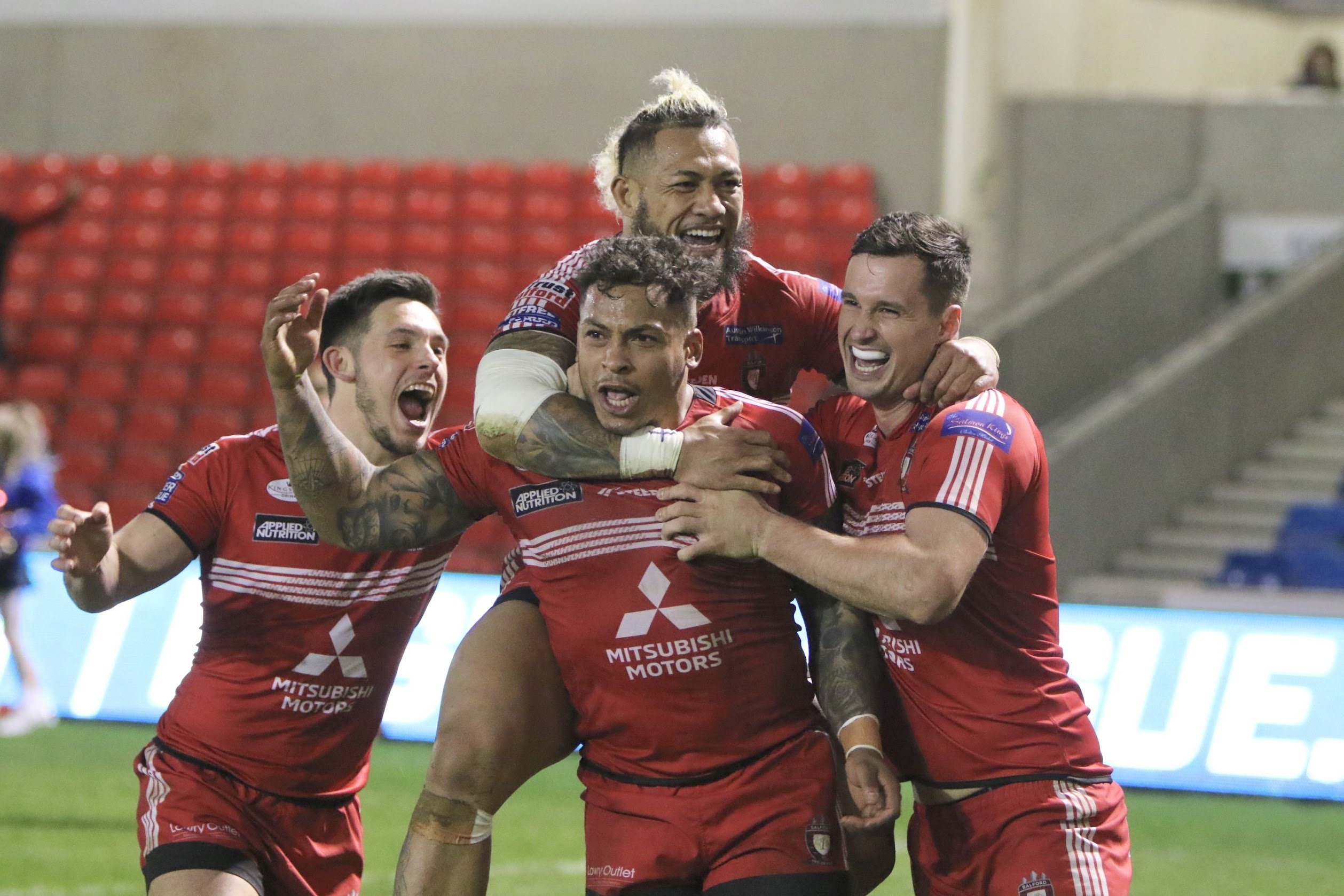 Salford earned back-to-back victories Betfred Super League for the first time since May 2017 with an emphatic 38-4 victory over Wakefield Trinity at the AJ Bell Stadium.
Jake Bibby grabbed his second double in as many weeks while Junior Sa’u, Tyrone McCarthy, Ryan Lannon, George Griffin and Greg Johnson all also found themselves on the scoresheet. Lui kicked two goals before leaving the field due to injury with McCarthy and Jack Littlejohn putting on their kicking boots in the second half.
Coming into the game, the Red Devils were already against it with Lama Tasi, Lee Mossop, Josh Jones, Weller Hauraki, Manu Vatuvei and Kriss Brining all sidelined however Salford couldn’t have asked for a better start.
A flowing move to the left-hand side eventually found Sa’u who’s sheer pace and power got him through the Wakefield line before he shrugged off Reece Lyne in the process of scoring. Lui converted and would add a further penalty goal midway through the half. Ian Watson’s men defended resiliently in the first half and went into the break with an 8-0 lead.
Half-back Lui – who had been partaking in a fitness test prior to kick-off – pulled up with a calf injury early in the second half meaning the Red Devils had to move Josh Wood into the halves and Logan Tomkins would see out the game at hooker.
The reshuffle didn’t faze the hosts as Niall Evalds made a 70m dash from a 20m restart before being hauled down by Lyne, who subsequently slowed the tackle down and was rewarded with ten minutes in the sin-bin. McCarthy kicked his first goal for Salford to extend the advantage to 10-0.
And, it was the back-rower who went over for the next Salford try as McCarthy simply outmuscled the Wakefield defence to plant the ball down from close-range. He again followed up with the boot from in front of the posts.
Salford continued to control the game and Lannon crossed ten minutes into the second-half after being the quickest to react to a fortunate ricochet. Joe Arundel scored Trinity’s only try shortly after, but the Red Devils really grabbed the game by the scruff of the neck when Bibby scored in the corner following some slick hands wide.
With just over ten minutes remaining Salford turned on the style and ran out comfortable winners. Returning forward Griffin powered his way over after the Red Devils forced an error from Wakefield bringing the ball off their own line. Littlejohn converted.
Bibby made it four tries in two games with an almost identical effort to his first of the game before Johnson rounded off a wonderful victory latching onto the ball after Sa’u stabbed the ball into the in-goal.
The victory sees Salford climb above Trinity into 7th place in the Betfred Super League ahead of hosting the current leaders St Helens on Thursday.
Salford Lineup: Evalds, Bibby, Welham, Sa’u, Johnson, Lui, Littlejohn, Nakubuwai, Tomkins, Burgess, Griffin, McCarthy, Flanagan.  Interchanges: Kopczak, Lannon, Wood, Murray.
Wakefield Lineup: Grix; Jones-Bishop, Lyne, Arundel, Tupou; Miller, Finn; Huby, Randell, Hirst, Ashurst, Kirkmond, Horo.  Interchanges: Wood, England, Arona, Baldwinson.
Salford Scorers: Tries- Sa’u (4’), McCarthy (48’), Lannon (51’), Bibby (57’ 74’), Griffin (68’), Johnson (76) | Goals-  Lui (4’, 31’), McCarthy (45’ 49), Littlejohn (69’)
Wakefield Scorers: Tries-  Arundel (54’) | Goals- N/A.
Man of the Match: Tyrone McCarthy.
Referee: James Child. Touch Judges: T. Crashley & D. Bowmer.