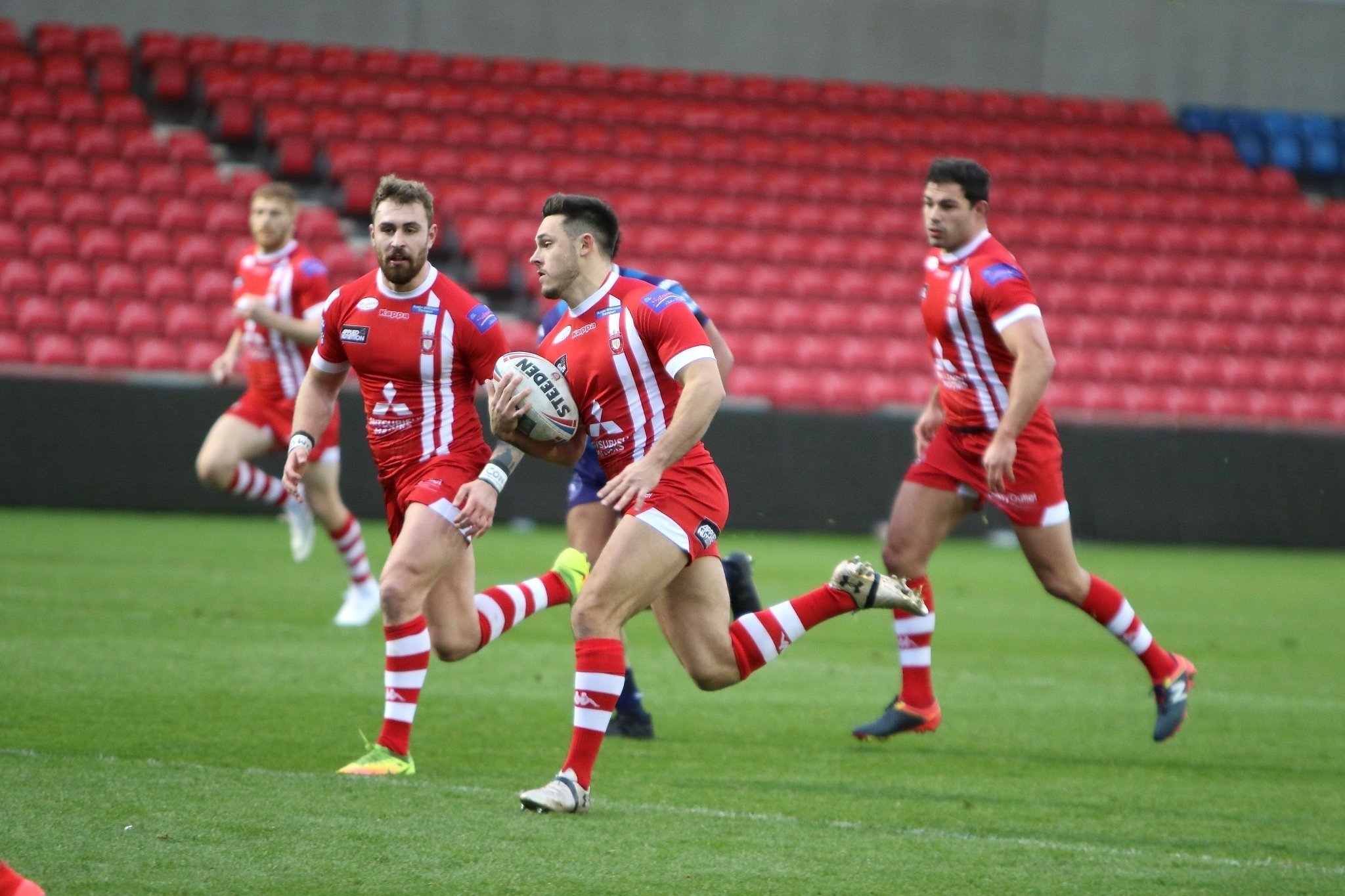 Salford Red Devils got 2019 off to a perfect start with an eleven-try rout over local rivals Swinton Lions at the AJ Bell Stadium.
Junior Sa’u, Greg Johnson and Joey Lussick all grabbed braces on a rampant afternoon for Ian Watson’s men while Jackson Hastings, Niall Evalds, Rob Lui, Ed Chamberlain and Derrell Olpherts also got their names on the scoresheet.
It was Sa’u who opened the scoring powering over from close-range after collecting the ball at the second attempt. Hastings was the provider for the opener, but he soon turned try-scorer six minutes in pouncing on Lui’s neat kick under the posts.
The Red Devils fast start continued when Mark Flanagan found Evalds on his inside to cut open the Swinton defence for the third time in the opening fifteen minutes. However, the Lions did cross shortly after as Oscar Thomas’ low kick wasn’t dealt with by Salford and Mike Butt was quickest to react.
Swinton’s revival was short-lived however as Lui managed to fend off three Swinton defenders to force his way over after jinking inside. With around eight minutes of the half remaining Chamberlain benefitted from some quick hands out wide to further the lead going into the break.
Head Coach Ian Watson made five changes at the break and it was substitute Johnson who got the scoring for the second half underway. The winger went close a minute earlier but was held down by Lewis Hatton who was sent to the sin-bin. However, Johnson did get on the end of a well-timed Kris Welham pass moments later.
In similar fashion to the first half, Flanagan would again find an onrushing Evalds on the inside and the full-back found Lussick in support who notched his first of the afternoon. Evalds was causing all sorts of problems for Swinton and his quick play at first receiver followed by a sublime tip-on from Welham put Johnson in for his second in just six minutes.
A try-scoring run of four in nine minutes was rounded off when Lussick’s low kick was chased down by Welham with the centre then giving it back to the Australian for his second.
Swinton would be handed another yellow card when Butt held down Olpherts who had raced seventy metres from his own try-line. The man advantage again proved dividend for Salford as Academy player and triallist Connor Davies-Aspey cut through the Lions line before finding Olpherts in the corner to round off the scoring.
Salford welcome current Betfred Super League champions Wigan Warriors to the AJ Bell Stadium on Sunday 20th January, 2pm kick-off, in their second pre-season friendly.
Salford Red Devils: Evalds, Bibby, Sa’u, Welham, Chamberlain; Lui, Hastings; Mossop, Lussick, Dudson, Jones, Turgut, Flanagan.
Interchanges: Griffin, McCarthy, Nakubuwai, Johnson, Olpherts, Davies-Aspey, Wellington.
Swinton Lions: Hansen, Butt, Lloyd, Williams, Aaronson; Fairclough, Thomas; Bennion, Waterworth, Austin, Hope, Jones, Hatton.
Interchanges: Brickhill, Gray, Hall, Halton, Jones, Kenga, Ratu, Warne, Worrall, Ashton.

📺 Our exclusive interview with new Club captain, Kallum Watkins is now available to watch on YouTube!