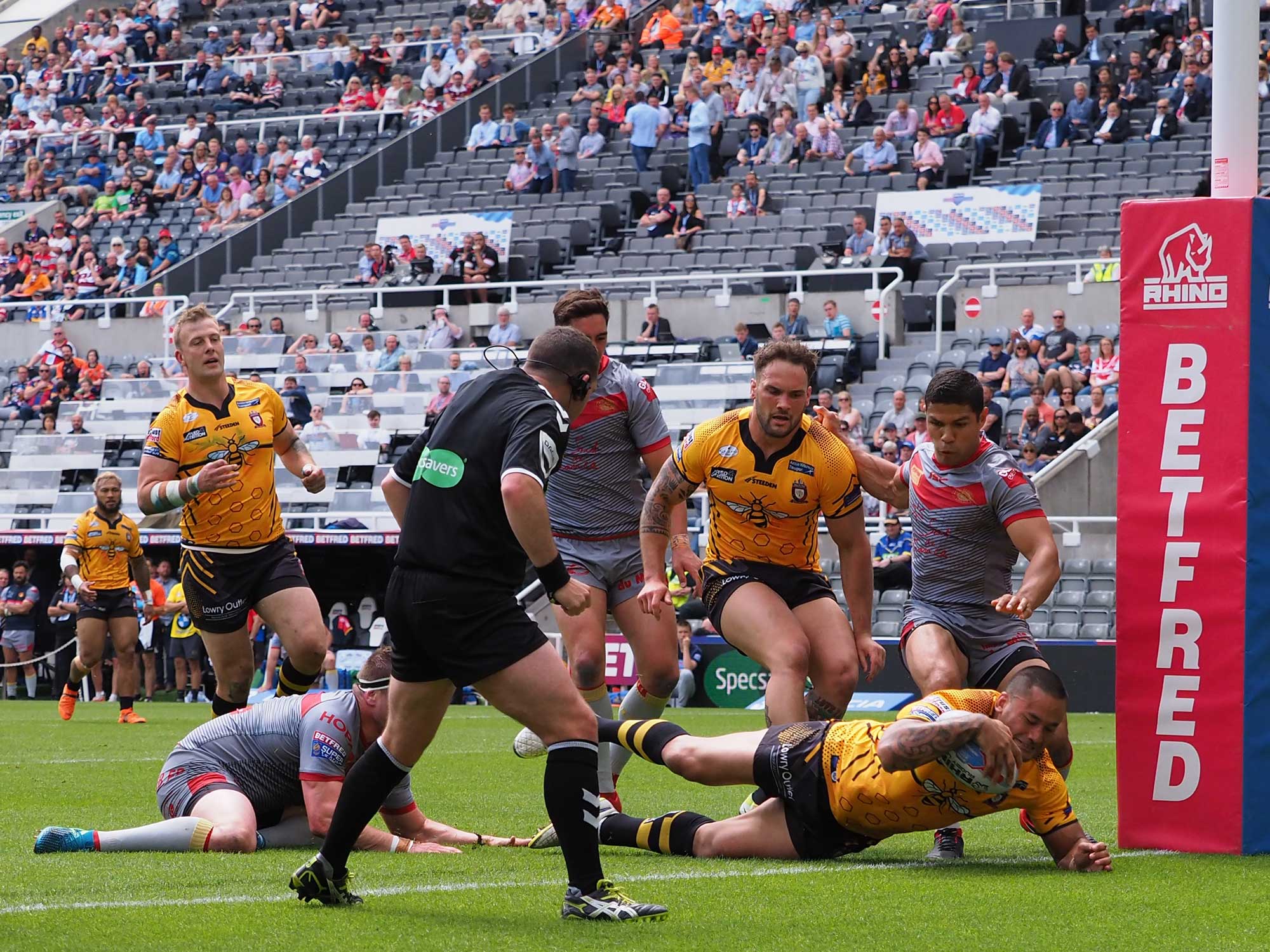 Salford Red Devils succumbed to defeat at the Dacia Magic Weekend as former Red Devil Jodie Broughton’s hat-trick helped the Catalans Dragons on their way to a deserved 26-12 triumph at St James’ Park.
Alongside Broughton’s treble, scores from Benjamin Garcia, Julien Bousquet plus three goals from Tony Gigot ensured the French side secured a pivotal victory at the weekend extravaganza.
The Red Devils flew out of the blocks and found their way over the line with just three minutes on the clock.
Kris Welham cleverly flicked Robert Lui’s lofted cross-field kick into the path of the onrushing Derrell Olpherts who forced himself over. However, the score was chalked off due to offside in the build-up.
Salford weren’t to be denied for long though as Weller Hauraki broke forward and flicked inside to Mark Flanagan, the latter then returned the ball after producing a terrific offload which forged an opening for second-rower Hauraki to cross over under the sticks.
Lui then comfortably landed the resulting conversion to extend the lead to 6 points but Salford’s efforts were undone less than five minutes later as Benjamin Garcia pierced through the Reds backline before powering over – although Josh Drinkwater did miss the subsequent goal.
Garcia’s score seemingly spurred the Dragons on and the French side soon forged another point scoring opportunity as George Griffin conceded a penalty through an interference. Catalans opted to kick for two, but Tony Gigot was unable to convert the goal despite it appearing harder to miss.
Catalans soon turned the game on its head when Logan Tomkins spilled Gigot’s grubber in-goal before Julien Bousquet pounced onto the loose ball to touch down before Gigot calmly added the extras.
Ian Watson’s men were struggling to build any momentum at this point and were fortunate not to have suffered another score just a minute later as Garcia found his way over again but luckily for Salford, the forward was unable to successfully ground the ball.
Catalans headed in at the break with a 10-6 lead and they picked up where they left off after the break as former Red Devil Jodie Broughton latched onto a loose ball before jinking past Niall Evalds to stretch over the whitewash.
Gigot was unable to add the extras, but that was where Salford’s luck ran out as Broughton claimed his second try of the contest in style.
Lewis Tierney found a gap and produced a sensational pass to allow Broughton to dart 40m and score despite the best efforts of Lui and Jack Littlejohn.
Things worsened for the Red Devils when Broughton completed his hat-trick a minute later. After Josh Drinkwater went close seconds prior, Gigot delivered a looping kick to allow the winger to cross over.
Kris Welham exited the field after picking up an injury and the Dragons extended their lead immediately afterwards as Gigot added his third goal to inflict further misery upon the Salford players.
Salford did claim a consolation try though, Littlejohn’s short ball found its way to George Griffin who crossed over the line unchallenged. Lui added the extras to make the scoreline more respectable.
Salford Lineup: Evalds, Johnson, Welham, Sa’u, Olpherts, Lui, Littlejohn, Kopczak, Tomkins, Mossop, Griffin, Hauraki, Flanagan.
Interchanges: Tasi, Murray, Wood, McCarthy.
Catalans Lineup: Gigot, Broughton, Mead, Williame, Tierney, Bird, Drinkwater, Simon, McIlorum, Moa, Julien, Garcia, Casty.
Interchanges: Anderson, Bousquet, Maria, Baiteri.