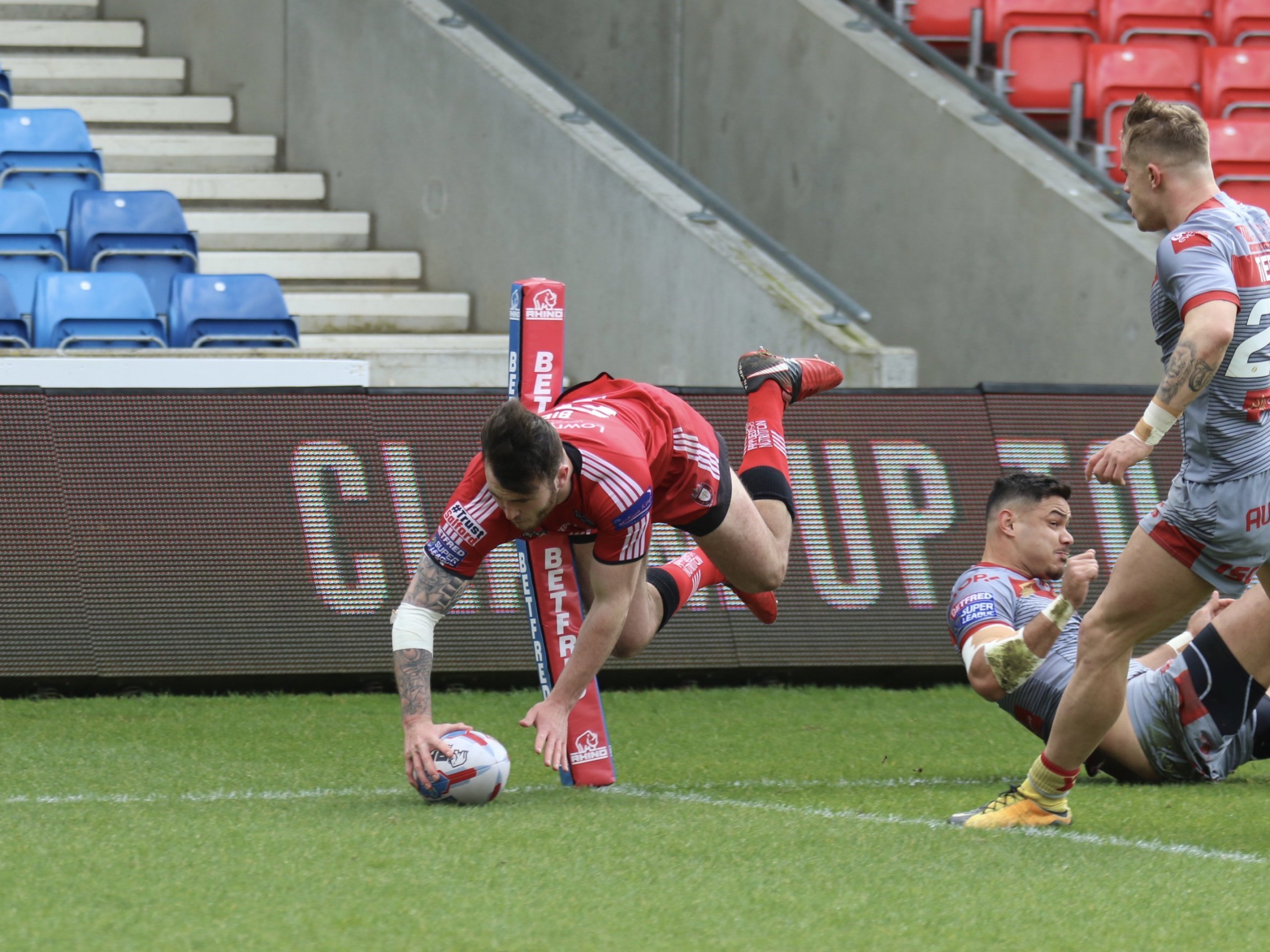 The Red Devils travel to Perpignan to take on Catalans Dragons at the Stade Gilbert Brutus this coming Saturday, and Ian Watson’s side will be looking to build on their encouraging display during last week’s loss to Castleford Tigers.
Last time out
Salford head into this weekend’s showdown after producing a creditable display last Friday at the AJ Bell Stadium.
Despite falling to a 6-24 defeat, Watson’s troops more than matched last year’s League Leaders Shield winners and found themselves on level terms at the interval – though Castleford did take the lead through Jake Webster on 18 minutes.
After persistently piling the pressure amongst the Tigers’ defensive line, Salford’s efforts were rewarded five minutes prior to the break when Jake Bibby latched onto Ed Chamberlain’s low kick to touch down in the corner.

34' – TRY SALFORD! Jake Bibby makes it tries in four consecutive games as he latches onto a low kick towards the corner.

However, the second half didn’t quite live up to expectations and the visitors crossed for three second half efforts as Webster grabbed his second, before Michael Shenton and Kieran Gill also crossed to snatch victory, following an error-ridden affair.
Catalans meanwhile, head into the tie on the back of a thrilling 22-22 draw with Warrington last time out. Despite taking the lead through Benjamin Jullien, the Dragons soon found themselves up against it as the hosts scored three quick-fire tries through Bryson Goodwin, Josh Charnley and Harvey Livett.
However, the French side regrouped and immediately clawed their way back into the contest as Michael McIlorum surged over the whitewash, before Tony Gigot crossed three minutes prior to the break to the level the scores.
Josh Drinkwater – who has been in breathtaking form since signing for Catalans in April – kicked five goals, but neither side was unable to claim a late victory.
Form
Both sides made slow starts to 2018, Steve McNamara’s Dragons had won just once prior to the Good Friday meeting with Salford at the AJ Bell, whilst the Red Devils had achieved marginally better with two victories.
On that March afternoon, it was Watson’s side who’d triumph as tries from Jake Bibby, Niall Evalds, Greg Johnson, Josh Jones and Kris Welham along with six goals from Robert Lui ensured The Red Devils secured a comfortable win.
That fixture appeared to spark a French revolution. Since then, Catalans have played an intriguing brand of Rugby and have managed to conjure up 8 wins from 14 games and reach the semi-finals of the Ladbrokes Challenge Cup.
During their recent run, the Dragons overturned Salford 26-12 at the Magic Weekend, as former red Jodie Broughton crossed for a hat-trick.
Salford have swept aside Huddersfield Giants, Wakefield Trinity and Widnes Vikings in the same period but have suffered frequent injury blows. The Red Devils will be hopeful of producing another battling performance this time out, after nullifying Castleford’s attacking power for much of last week’s tie.
Head-to-Head
In this week’s head-to-head we pit versatile backs Ed Chamberlain and David Mead against each other, as we highlight the pair’s influences within their respective sides.
Chamberlain – who joined the Red Devils permanently on Wednesday – has certainly caught the eye since arriving initially on-loan from Widnes last month. Naturally a centre, the 22-year-old is also capable of filling the void on either wing or at full-back, with the latter being his primary position for Salford thus far.
Ed has made three appearances for the club during his loan spell and particularly impressed in recent defeats to Hull Kingston Rovers and Castleford.
It was during his home debut versus the Tigers where the youngster truly shone though, the former Widnes man produced a classy display throughout and provided a delicate kick to assist Jake Bibby’s first-half effort.

David Mead is one of the most influential players in the world scene of Rugby League, the Papua New Guinea captain shone for his country at the 2017 RLWC ‘down under’ and has carried this form into his spell with the Dragons.
The 29-year-old is the Dragons’ top scorer with 8 tries and possesses a similar versatility to Chamberlain, which makes him a formidable threat. Mead is more than handy at full-back, wing or centre – with Catalans boss McNamara opting to play him in the former for much of the campaign.
Team News
Jackson Hastings – who joined the Red Devils this week – misses out on the 19-man squad and will not arrive in the UK until next week, injured duo Greg Johnson and Logan Tomkins remain sidelined for the trip to Perpignan.
On a positive note, Full-back Niall Evalds returns to the squad following a nine-week spell on the sidelines after breaking a bone in his leg during April’s victory over Wakefield Trinity.
24-year-old Evalds replaces Luke Burgess in the squad who is still suffering from a recurring knee injury. Prop Craig Kopczak is named in the squad but is unlikely to feature as the forward hasn’t fully recovered from a quadricep injury.
French forward Levy Nzoungou made his second appearance – and his home debut – last Friday against Castleford Tigers and will be looking to make it back-to-back appearances this weekend as he returns to his homeland.
As for the visitors, former Red Devil Jodie Broughton has been given the go-ahead to feature and will be looking to haunt Salford once more, after grabbing a sublime hat-trick as Catalans triumphed over Salford in May’s Magic Weekend. The winger replaces Mickael Goudemand in what is the sole change to the French side’s squad from last week’s battle with Warrington.
Squads
Catalans: David Mead, Jodie Broughton, Brayden Williame, Fouad Yaha, Samisoni Langi, Rémi Casty, Sam Moa, Louis Anderson, Benjamin Garcia, Greg Bird, Julian Bousquet, Mickael Simon, Jason Baitieri, Michael McIlorum, Lewis Tierney, Benjamin Jullien, Tony Gigot, Josh Drinkwater, Kenny Edwards.
Salford: Junior Sa’u, Niall Evalds, Rob Lui, Craig Kopczak, Josh Jones, Mark Flanagan, Lama Tasi, Ryan Lannon, Tyrone McCarthy, Ben Nakubuwai, Josh Wood, Derrell Olpherts, Lee Mossop, Jake Bibby, Levy Nzoungou, Daniel Murray, Jake Shorrocks, Ed Chamberlain, Greg Burke.
Table Permutations
Salford have the opportunity to move to within a point of Hull Kingston Rovers in the Betfred Super League table, providing the Robins fail to secure any points when they host Warrington Wolves at KCOM Craven Park this evening.
A Catalans victory would see the Dragons move above Wakefield into 6th place, at least until Trinity entertain Hull FC on Sunday afternoon.
Ready for the Rhinos!
Purchase your tickets for our game with Leeds on Friday 27th July from the Club Ticket Office, on 0161 786 1570 or by simply clicking HERE.