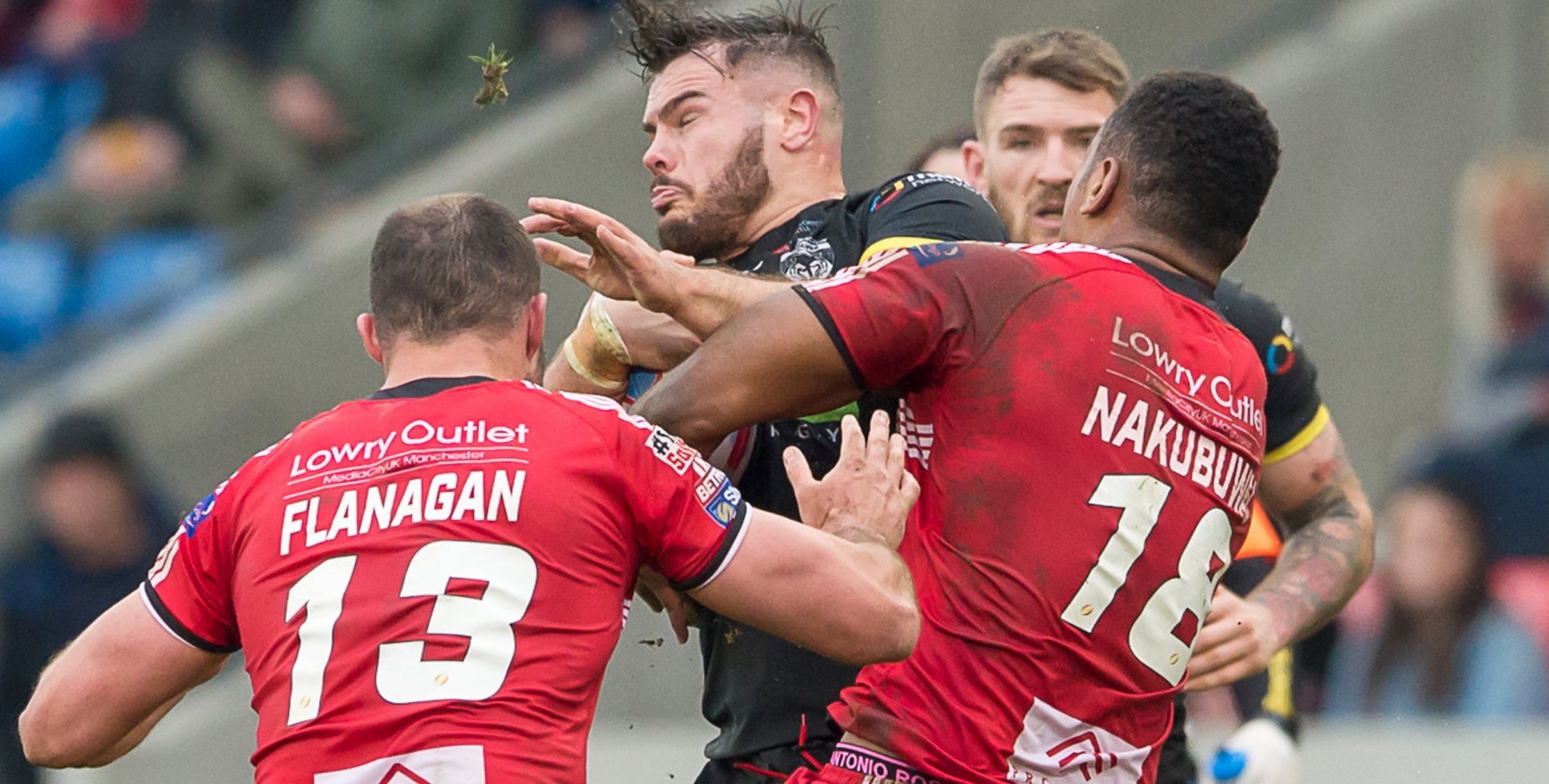 The Red Devils travel to the Halliwell Jones Stadium to face Warrington Wolves in search of back-to-back victories following a crucial win over Widnes Vikings two weeks ago.
Last time out
Salford returned to winning ways a fortnight ago with a 26-12 victory over Widnes Vikings at the AJ Bell Stadium in a game which saw the Red Devils fight back after going into the interval behind.
Ian Watson’s men scored 18 unanswered points after the break with Jake Bibby, debutant Greg Burke – against his parent club – and Rob Lui all scoring with the final try coming following Chris Houston’s red card for dissent.
Kris Welham crossed for a brace in the first half before being sin-binned while Tom Gilmore and Patrick Ah Van were the Vikings’ try-scorers.

Warrington narrowly edged out Wakefield in their last Betfred Super League outing but had raced into a 20-0 lead thanks to scores from Stefan Ratchford and Tom Lineham. Tinirau Aruna was Trinity’s only scorer in the first half.
Kyle Wood’s double closed the gap further however Kevin Brown kept Warrington in control. Sita Akauloa was sent for ten minutes following a high tackle and Trinity took advantage crossing via Tom Johnstone and Pauli Pauli but there wasn’t enough time to finish a comeback as the Wolves maintained their position inside the top four.
Form
Salford returned to winning ways against Widnes Vikings at the AJ Bell Stadium following a tough run throughout the month of May. The Red Devils were unfortunate to lose out to Catalans and Huddersfield before a spirited second half performance against Hull FC. The hard work paid off as Salford earned a vital two points against the Vikings.
Despite still sitting inside the top four, Warrington have had a mixed bag of results since the start of May. They earned impressive victories against Leeds Rhinos and Hull FC either side of a disappointing Dacia Magic Weekend showing against Wigan Warriors.
Since, they have been narrowly edged out by Castleford Tigers by four points before then pipping Wakefield Trinity by two points at the Mobile Rocket Stadium. The Wolves have won four of their last five games at the Halliwell Jones Stadium.
Head-to-Head
In this week’s head-to-head we pit centres Kris Welham and Bryson Goodwin against each other as both put in Man of the Match performances in their last outings.
Welham – who has missed just one game for the Red Devils in 2018 – crossed for a first half brace against Widnes with his second marking 150 career tries. The experienced centre has continued his form into his second season with the Club and has been consistent in both attack and defence.

???? Congratulations to @KrisWelham who crossed for his 1⃣5⃣0⃣th career try last night with this effort! pic.twitter.com/iIcSzskdjA

Goodwin joined Warrington from Leigh Centurions at the start of the 2018 season and has proven a solid addition. The Kiwi caused a lot of issues for Trinity out wide a fortnight ago as well as kicking three pivotal goals.
Kris Welham was one of the standout performances against Wire earlier in the season as noted in our ‘Stat Pack’ following the game. Both Welham and Goodwin are veterans and whichever centre can cause the opposition the most issues could see their side come out on top on Friday evening.
Team News
Mark Flanagan – who missed out on the victory over Widnes with concussion – returns to the squad alongside Lee Mossop who could also re-enter the team. Craig Kopczak and Tyrone McCarthy are the two players who leave the 19-man squad which was named to take on Widnes a fortnight ago.
Harvey Livett is likely to miss a few weeks for the Wolves while Ryan Atkins is also sidelined. Warrington have also decided to rest Chris Hill and Stefan Ratchford who both featured in England’s test win over New Zealand in Denver last weekend.
Squads
Warrington: Sitaleki Akauola, Kevin Brown, Mitch Brown, Josh Charnley, Daryl Clark, Mike Cooper, Dom Crosby, Bryson Goodwin, Jack Hughes, George King, Toby King, Tom Lineham, Ben Murdoch-Masila, Dec Patton, Joe Philbin, Ben Pomeroy, Tyrone Roberts, Morgan Smith, Ben Westwood.
Salford: Greg Johnson, Kris Welham, Junior Sa’u, Robert Lui, Jack Littlejohn, Logan Tomkins, George Griffin, Mark Flanagan, Lama Tasi, Ryan Lannon, Ben Nakubuwai, Josh Wood, Derrell Olpherts, Lee Mossop, Jake Bibby, Daniel Murray, Jake Shorrocks, Ed Chamberlain, Greg Burke.
Table Permutations
A Salford Red Devils victory could see them climb up to 9th in the Betfred Super League table dependant on Catalans Dragons result against Castleford Tigers. Hull KR sit in 11th place but a victory for the Robins wouldn’t see them move above Salford.
Warrington – similarly to the Red Devils – can’t move down the Betfred Super League table even if Hull FC overcome Widnes Vikings. However, Steve Price’s side can overtake Castleford if the Tigers lose to Catalans Dragons and the Wolves win.