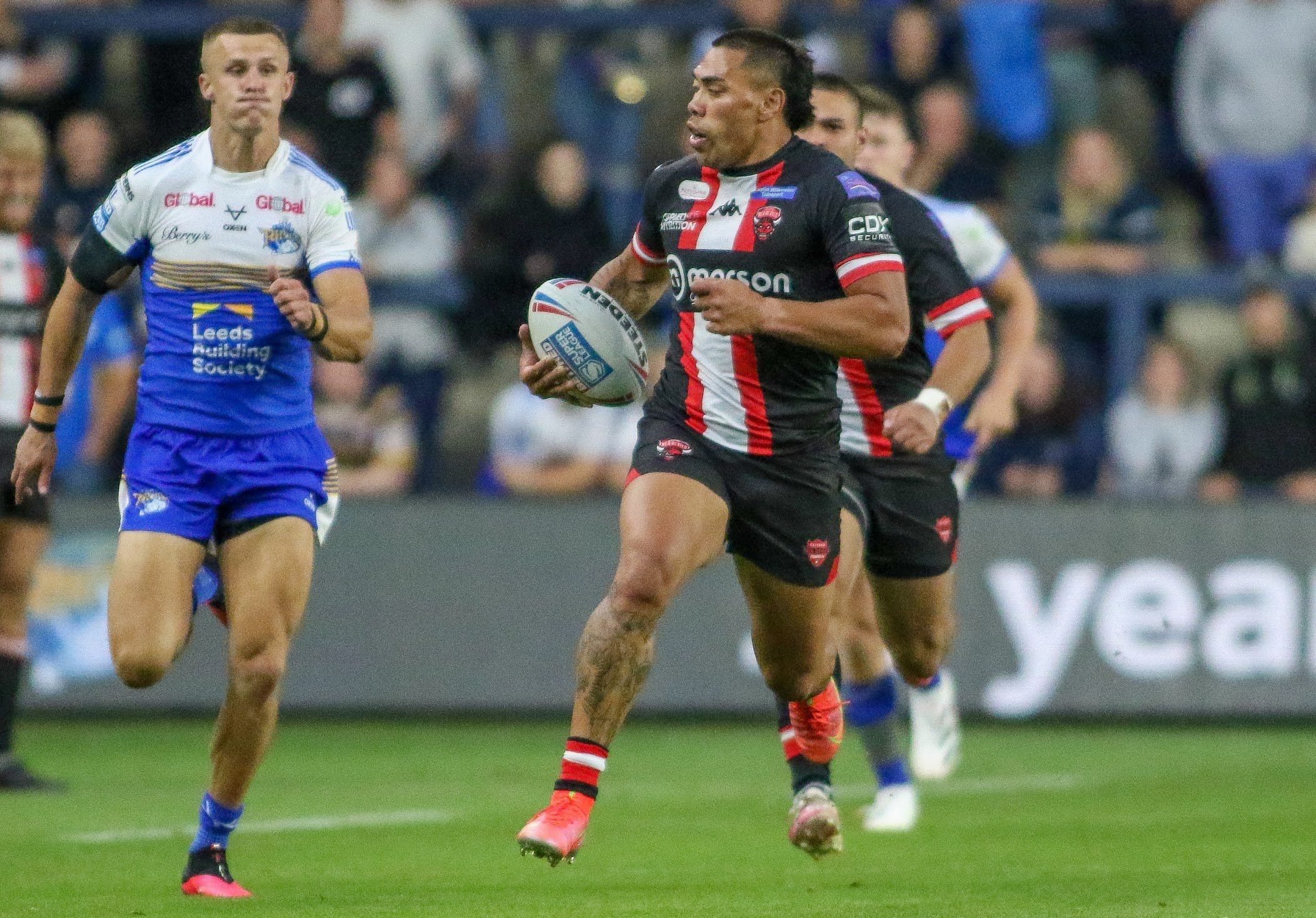 After successive victories in their last two encounters, Salford fans might have been forgiven for being a little more optimistic about their team’s chances in this latest outing than had proved to be the case in the 38-12 defeat at the A J Bell, back in June.  The Emerald Headingley Stadium, however, is seldom a happy hunting ground for the Reds and so it proved to be once more, with an almost identical score of 38-16 on the night.

Unflattering as the scoreline was, it nevertheless hid a number of twists and turns, thrills and spills, and minor wins and losses, which had to been seen to be fully appreciated.  Most significant of all were the sundry improvements our players had made in almost all but one aspect of their performance.

Even that scoreline could have been much closer as twice Salford players crossed for what many fans thought to be tries, only for both to be ruled out by the officials.  An additional twelve points, however, would have been more than welcome, and would have given a more balanced impression of the game because there was just so much with which to be impressed in their performance.

An early twelve-point deficit from back-to-back Leeds tries failed to knock the visitors off their stride, and despite their hosts having a majority of possession throughout the first half, the Red Devils galvanised and for a full thirty minutes repelled every onslaught on their line, many of which included resets of the tackle count.  Indeed, the Rhinos then had to wait until midway through the second half, when Salford were down to eleven men, for their next pair of tries, which came within three minutes of each other.

With ball in hand, the Red Devils looked a very well drilled, organised, unit.  The power of the forwards in particular, was most eye-opening. We have grown used to, over many seasons, Salford teams being penned on their own line unable to make hardly any progress up field to relieve the situation, but that was far from the case on Friday evening.

The forward drives, wherever they were employed, made notable in-roads into the Leeds defence.  One such, from Ryan Lannon, saw him make an extra ten metres, with Leeds players clinging to him in an effort to halt his progress.  The backs also made their contribution to this, with Ken Sio, who is always one of the most penetrative of players living up to his reputation.

Sets of six, in general were efficiently completed with kicks, many into the corners, almost all of which were well chased, with the Leeds recipient being immediately put to ground irrespective as to whether there were a number of, or only one, Salford player in attendance to deal with the situation.

Indeed, it was from Tui Lolohea’s pin-point accurate kick, that Krisnan Inu was able to display his undoubted skill in leaping above all others to collect the ball and hold onto it as he dropped to the ground, where his last-gasp grounding saw the try ruled out by the in-goal judge.

Ball handling skills had clearly been honed since the previous week, and it was moved wide with much more precision and to much greater effect than recently.  Impressive angles were run, not necessarily with the expectation of players getting through, but to wear down the Leeds defence, and make later attacks more likely to be successful, and, in fact, that is what happened, with the Red Devils finishing the stronger of the two teams.  Their reward came with three well-worked second half tries, the second of which, scored by Lolohea, was undoubtedly the try of the match.

All of which begs the question, not so much as “Why did we not win?” so much as “Why were we not even in contention at the end?” The answer is very clearly that their ill-discipline lost them that chance.  In a thirteen aside game, you have very little likelihood of holding your line intact for something approaching ten minutes, with only eleven players on the field. It may well be that they became frustrated at the number of fifty-fifty decisions, which went against them, but working with the referee is undoubtedly going to prove more beneficial than any conflict, in the long run.

In the end a total of twenty-six of Leeds’ points, comprising of two back-to-back pairs of converted tries together with a first half penalty goal, could be attributed, in some way, to the Red Devils’ indiscipline, thus giving them a mountain to climb when they did get on top in the last fifteen minutes.

It is  something which they need to address as a matter of urgency, as a team and also as individuals.  They had done too well in so many other respects, for their chances of winning to be dashed in this way.