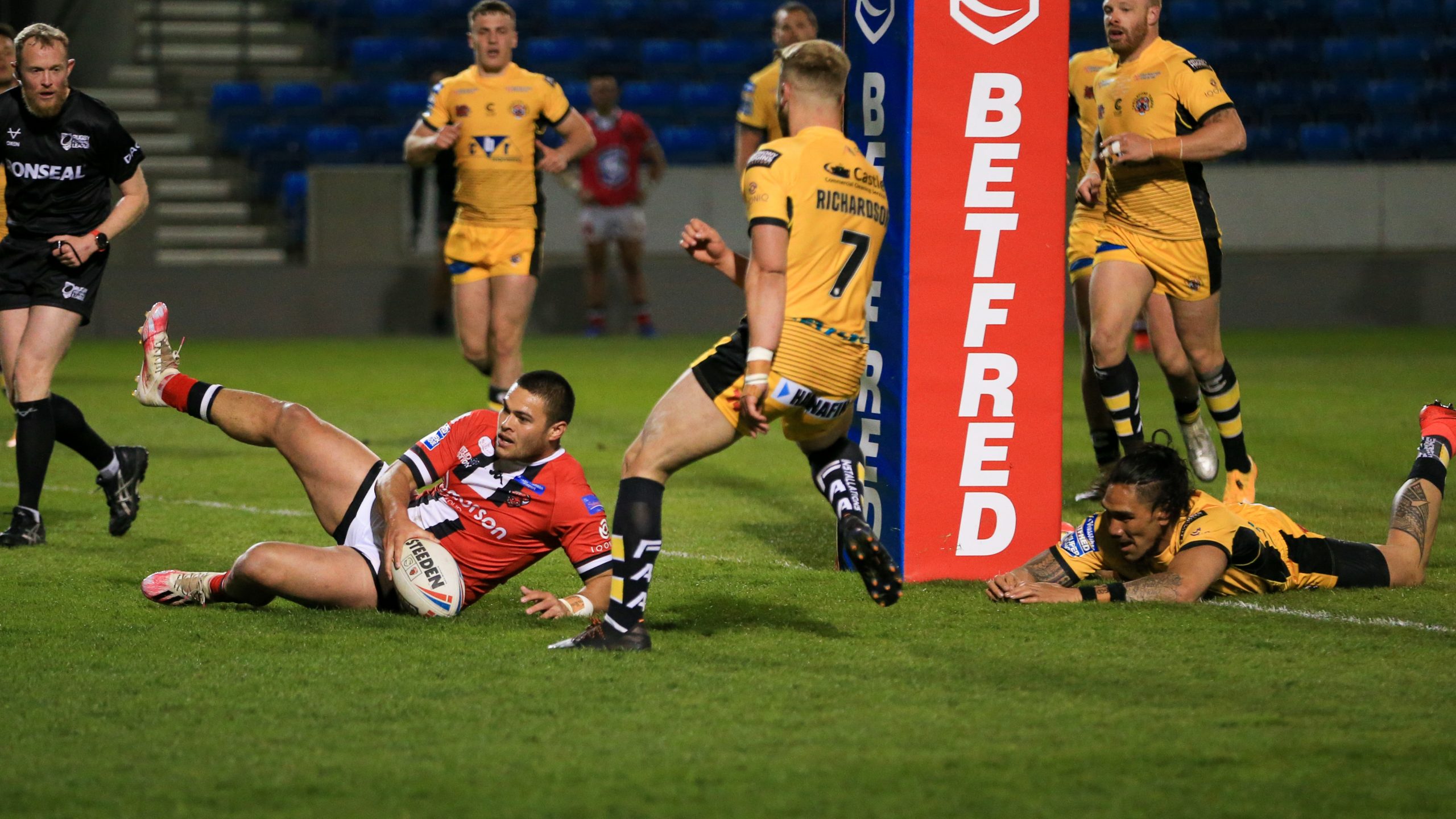 In what was a considerably improved first half performance, compared with other league matches so far this season, the Red Devils went head-to-head with the visiting Tigers for the first forty minutes, to be a matter of only seconds away from leaving the field, at half time, on equal terms.

Throughout the whole of that first period the two teams were so evenly matched that the whole game had been an arm wrestle from the start, with first one team and then the other briefly gaining the ascendency.  In order to do that, the Salford side showed from the outset the confidence and assuredness in their structures and systems which had come to the fore in the final quarter of their previous match against Leigh.

Indeed, it was Salford who settled first and had the better of the opening exchanges, with hooker Andy Ackers, being stopped centimetres from the visitors’ line, as a result of good, wide, expansive attacking rugby which had Castleford scrambling back to cover the danger.

If only he had managed to score at that moment, not only would it have provided the whole team with a fillip and injection of even greater confidence, it would have prevented the setback which followed.  A high Castleford kick at the end of the next set saw fullback, Elliot Kear, put under considerable pressure by Derrell Olpherts, and a Tigers try was the result.

A few weeks ago, the Salford heads would have dropped, but things have progressed significantly since then, and on this occasion, within four minutes the scores had been levelled, and four minutes after that the Red Devils had taken the lead.  Kallum Watkins it was, who, in similar vein to Olpherts, climbed above the Castleford defenders to take the ball and put Kevin Brown over by the posts.

Fine approach work, from the restart, set up a good attacking position and a strong run by skipper, Lee Mossop, gave hooker, Andy Ackers, sight of the line and he duly squirmed over from the play-the-ball.  Harvey Livett, who had been moved to left centre for the game, then underlined his invaluable versatility by taking over goal-kicking duties for the afternoon, which he did with a hundred percent success rate.

Indeed, another score was soon in the offing again following slick handling, but this time Brown was caught in two minds with too many feasible options, and a wayward pass, to nobody, rolled harmlessly into touch, and with it went the Salford momentum for a time.  Castleford were able to regroup, and five minutes later, drew level, at 12-12.

From that point, defences, which had been rather suspect on both sides, were tightened, and a lengthy, protracted arm-wrestle ensued, throughout which the Salford defence proved to be the measure of that of their visitors.  Not that it was a complete stalemate, because the Red Devils had another most promising line-break thwarted by a somewhat marginal forward pass from Watkins to Tui Lolohea, who was in the clear.

It would have been no more than the Red Devils deserved, had they gone in at the interval in the lead.  Drawing would have been acceptable, but what they really did not deserve was to finish the half in arrears.  Students of the game will frequently point to the demoralising impact that conceding a score either side of half time can have on a team, and the overall result.  Unforced errors can also be added to that, especially if they lead to scores.

With less than a minute left on the clock, an adjudged lost ball by Danny Addy in a tackle was further compounded by his questioning of the decision.  From halfway, Danny Richardson had no difficulty in putting his team two points into the lead.

Twenty-five seconds into the second half, on only the third play-the-ball of the half, a forward pass from Ackers, at dummy half, gave possession to the Tigers, who turned their lead into eight points, which made up the bulk of the ten-point difference between the two sides at the final whistle.

The second half, from thereon, became a war of attrition, but with the cushioning of their lead, one which the Tigers could more comfortably afford.  Match them, as Salford did for the majority of the time, discipline, especially for careless tackles, let them down.

With a penalty count of almost three to one in the half against them, they were deprived of an equal share of possession, and Castleford cheerfully took advantage of each additional set to build pressure and wear away at their hosts.  Even more significantly, a total of six points of their final score came from three penalty goals.

Nine minutes from the end, and then down to twelve men with Mossop in the sin-bin, Salford went over for a third try.  Brown’s kick into the in-goal area was latched onto by Lolohea.

Time was against them, however.  Castleford remained in control, and the Red Devils were left ruing the impact of their own costly errors.  Far more important, however, is that they now reflect on all that went so well in the first half, though rather more spasmodically in the second, and determine to produce the same with greater consistency, next week, in the Betfred Challenge Cup Quarter-Final rematch.

📽️ The Betfred Challenge Cup Quarter-Final is now available to rewatch on RDTV.

A great turnout and fantastic effort from everyone👏