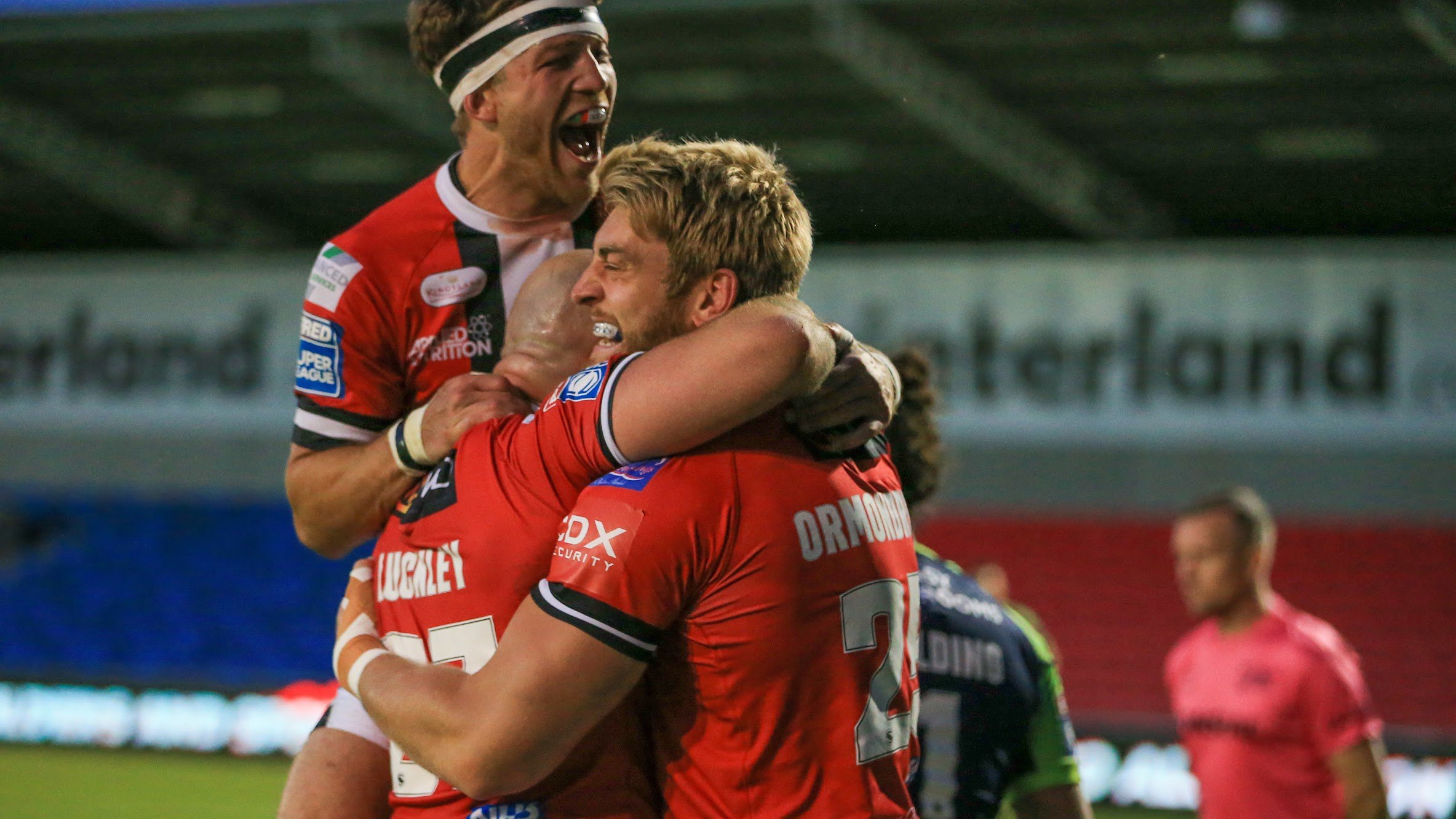 There are few teams with whom Salford have been as evenly matched, season after season in the Super League era, as Huddersfield.  True there have been periods when first Salford, and then later, Huddersfield have had their periods of ascendency, but in the more recent of years there has been virtually nothing to choose between the two of them, with their invariably winning one match each, remarkably, in their away fixtures.

Bearing that in mind, and also the fact that the Red Devils had already come out on top at the John Smith’s Stadium back in June, and with their rivals having shown some rather more impressive form of late, we might have all been of the mind-set, going into the game, that the Giants could prove too strong, on the night. A resilient performance however from Marshall’s men, ensured Salford made it three Super League wins in a row against the Giants.

Not only that, but the manner in which they pulled this off was quite commendable, in a match which turned out to be an arm wrestle from start to finish.  So much of their victory was down to their uncompromising defence, as there were two periods, of ten to fifteen minutes, when they were penned in their own half, having to withstand, and repel, onslaught after onslaught of Huddersfield attacks.

The first came early in the proceedings, when a penalty to the visitors for a high tackle put them in a great field position, where they proceeded to enjoy five, almost continuous, back-to-back sets of six, which ended with them taking a two-point lead, courtesy of a penalty for offside, at a play-the-ball.

It was of interest to note the number of penalties, from which Huddersfield took a shot at goal, rather than running the ball, giving them a total of six points – the equivalent of a converted try.  They must have assessed, from recent matches, that there would be sufficient of these to lay the foundation to their winning the game.  In the event this did not prove to be the case, with, thankfully, the Red Devils being a little more frugal in this respect, than in the previous two matches.

The second period came with a lengthy endeavour from the Giants to get back on level terms, and then possibly steal the game with a drop goal.  Nail-biting as this spell was, it has to be said that the Salford players rose to the challenge superbly, and they never seemed to be hanging on by a thread; that is, until four minutes from the end.

During both these prolonged periods of pressure, Salford had had great reason to be thankful to left winger Joe Burgess, who had dealt with every tricky, end-of-set kick towards his edge with great aplomb, using his height to outleap any challenging Giant, and pluck the ball out of the air before any damage could be done.

Four minutes from time, however, that gratitude turned into indebtedness, when his opposite number headed with ball in hand for the corner.  Not to be outdone, however, five metres from the line, Burgess caught him from behind, and despite being dragged along the ground from the momentum which had been built up, succeeded in halting all progress completely with the ball coming loose before it could be grounded, in what must have been the tackle of the match.

With ball in hand, Salford once again showed the degree of control and understanding with one another in each passage of play, showing incredible patience in the first half when this brought field position and applied pressure, but without reward, points-wise.  That however did not last for ever;  just thirty-six minutes to be precise.  There have been other matches this season when length of the field tries down the right flank have, from the opposition’s mistakes, turned the game in their favour.

This time, it was not Ken Sio who was there to sprint the length of the field but Rhys Williams who did every bit as well.  Nor was it the first time that Krisnan Inu has been the one who intercepted the pass to set up his winger with this race downfield to score.  The beauty of interception tries is that for the opposition it is a ‘double whammy’ because, as on this occasion, they are often within touching distance of a try for themselves, whilst the dent to their confidence takes some little time to overcome.

Even worse, from their point of view, was to succumb to not just one, but a pair of tries, either side of the interval, the second of which came on 42 mins, when Tui Lolohea showed how well he is settling into the fullback role, by timing his insertion into the Red Devils’ attacking line so that he could cut through for a typical fullback’s try, to put Salford ahead for the first time.

That lead had to be recouped fifteen minutes later, after Huddersfield had knocked over two penalty goals to restore their two-point advantage, but what a well-worked try it was, with Andy Ackers drilling the ball into the in-goal area from dummy half, and Jack Ormondroyd showing an exceptional turn of pace for a prop, to ground the ball behind the posts, before it ran dead.

A further six points were available shortly after, when Danny Addy broke through before handing on to Lolohea. Unfortunately, Tui’s pass to Chris Atkin was, surprisingly, called as forward, so the chance was lost.  Had it resulted in a try it is distinctly possible that Salford would have gone on to score a couple of others, on the back of it.  As it was, they were required to return to the high level of defence they had shown earlier which, with Burgess’s final involvement, secured them the win.

It is only fitting that such a gruelling, hard fought, battle should be won in the name of the magnificent Lee Mossop, whose contribution to the development of the club in recent years cannot be overstated.  He has led the team out, at Old Trafford in the 2019 Grand Final, and then at Wembley in the 2020 Challenge Cup Final – two finals for which Salfordians had waited fifty years, to witness.

His contribution on the field has been there for all to see, but his influence off the field has been equally as great.  I, for one, am more than grateful to Lee for his consideration, kindness, and support, which I have received, throughout the time he has been with us, as indeed, I am sure, is everyone else who has had the pleasure and privilege of working with, or playing alongside, him.

We can only now thank him for all he has done for Salford Red Devils, wish him all the very best in the future, and be pleased that the players whom he has led all season, were able to give him, and the rest of us, this victory, in his honour.