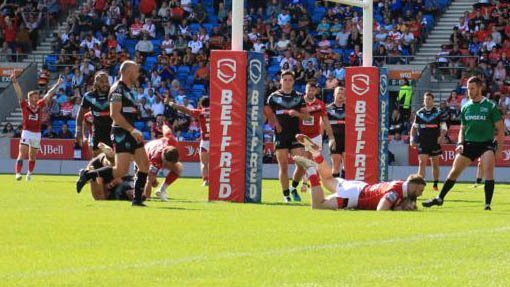 There are times in life, when you have to rub your eyes and pinch yourself to make sure you are not dreaming.  Last Sunday, at the A J Bell, must have been one of those occasions for many Salford fans, for no matter how optimistic anyone could have been, prior to kick off, the eventual result of the game must have been well beyond the wildest of their dreams .

Nothing in this world is perfect, and there is always room for improvement in any sphere or walk of life, but occasionally something comes along on which making any improvement at all would be extremely difficult, and it becomes more important just to enjoy it solely for it was, or still is.

So, far from singling out certain aspects of the game, let us take a backward glance at the events of Sunday afternoon, and remind ourselves of a few things.

Let us start by remembering that our opposition on the day actually was St Helens, currently, reigning Super League Champions, feared, and respected, throughout the league, with a defence so unrelenting that it has the lowest points against total in Super League.

They are a team of many talents, with internationals scattered throughout the various positions within the side, who can win games solely with their own individual talents. So, it certainly was not just a run of the mill side which they put to the torch.  The boost to the players confidence, particularly in one another will have been massive, and they did it in such style.

Their handling was out of the top drawer, and by deploying that, they saved themselves a considerable amount of work and effort.  In years gone by, coaches used to expound the old maxim ‘Let the ball do the work’ and, not for the first time this season, the Red Devils showed that that philosophy is as true today as it ever has been.  An additional by-product is that by not going into contact as much there is rather less chance of picking up an injury – something which Salford can little afford, at the moment.

Then, there was the running, and the angles at which they approached the defensive line.  Man of the Match, Tim Lafai, was outstanding at this and consequently prised open many openings for himself and his teammates, not least, his winger Joe Burgess, who positively revelled in all the space he was given.  Likewise, Brodie Croft, for his crown-topping try of the match, successfully avoided being tackled by at least two defenders, by a combination of pace and direction.

One thing is for sure, and that is that this was not a one-off fluke, because it would seem as though we are actually getting quite used to all this.  After all, it was only a few weeks ago that the team scored a club record number of seventy-four points in a match.  Wakefield would undoubtedly swear to its being no one-off fluke.

There have been comparisons between this side and that of the nineteen-seventies, and understandably so.  In the Rugby League Quality Street series, a number of the players interviewed have identified that team’s hallmarks of: high-quality entertaining rugby, closely knit team relationships, a leader in Brian Snape who was totally committed to the cause of sheer entertainment, highly talented individuals, many of whom became household names, and the knack of being able to score tries from virtually anywhere on the field.

If any of this sounds familiar, then there must be some truth in the argument.  Certainly, in Paul Rowley, there is the leadership which appears to be expounding the importance of classy, high speed, entertaining rugby, unlike so many other clubs where safety first is the order of the day. Similarly, in the likes of Brodie Croft, Kallum Watkins, Ken Sio, Marc Sneyd, to mention only a few, we have the talented individuals, who are needed to win matches.

A good day for all, at the office, therefore, last weekend.  Things went right, the passes stuck, and Saints were made to look very ordinary indeed – “Near perfection” was the judgement given on this week’s Super League Show, by host Tanya Arnold .  How absolutely beautiful it all looks when it comes off, but it can seem very different on the occasions when the timings are off.

High speed, entertaining rugby is a risky business – too risky it would seem for many coaches and clubs – but what a joy it is to have the pleasure of watching quality such as Sunday’s, even on an ad hoc basis, only.  Watching it on a fairly regular basis would be wonderful, but that degree of consistency of performance has to be worked towards, and hiccups along the way have to be expected and endured.  Leeds is next week; for now let us just revel in the performance we put up against St Helens.