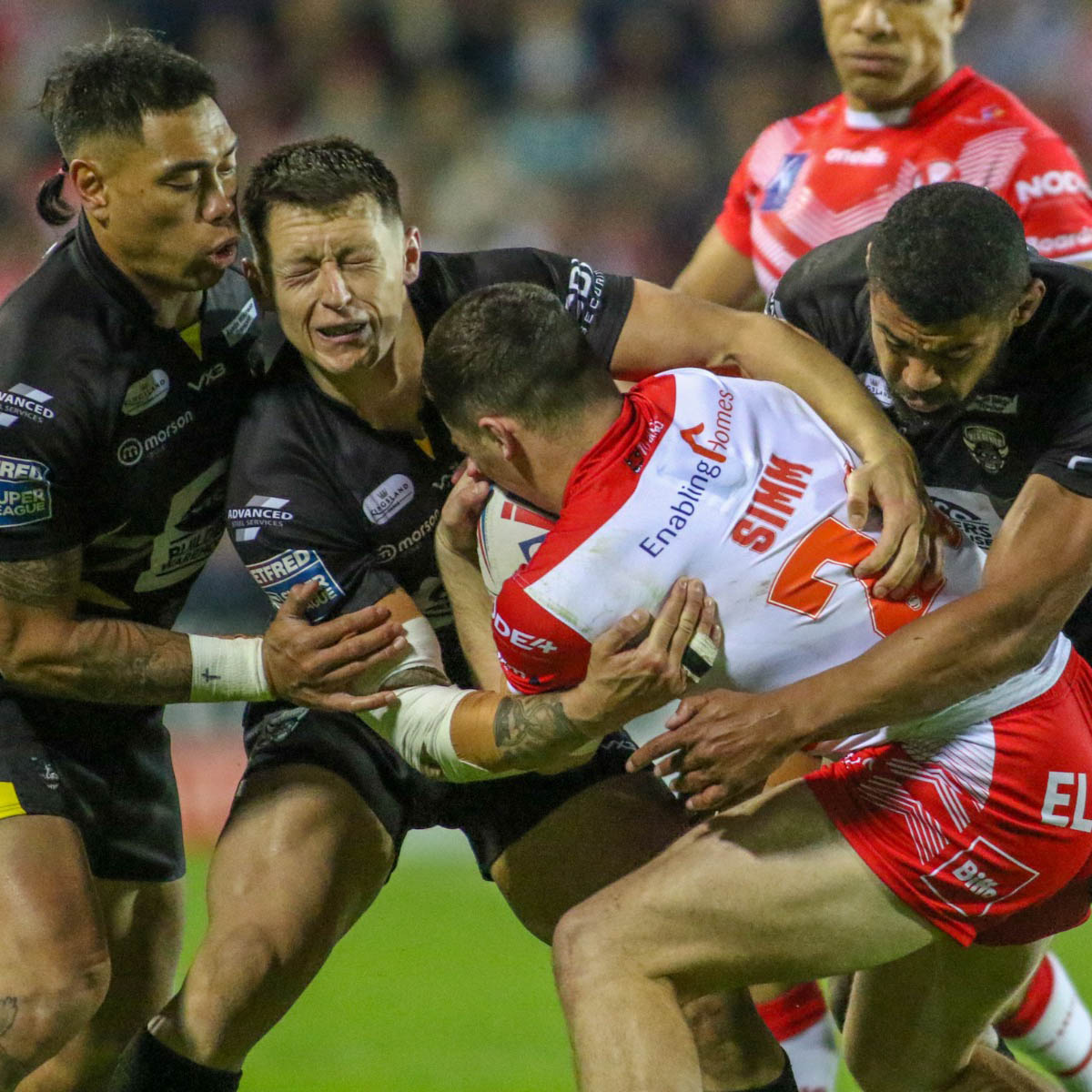 Anyone who had felt that the Red Devils would not be able to follow up their vastly improved performance at Wigan with anything similar, only five days later, against the current Super League Champions, again on their own ground, must have had one almighty shock.  Not only did the Reds repeat their dominant performance of the previous week at the Totally Wicked Stadium, they improved on it even further.

Whereas at the DW, everyone had left feeling disappointed at our not managing to take the Warriors into Golden Point Extra Time, last night we were all disappointed that we had not won, for indeed, over the eighty minutes, Salford were the better team.

In fact, St Helens can consider themselves rather lucky to have come away with the points, and indeed there were many of their fair-minded supporters who readily acknowledged this.  They are renowned throughout the league for their uncompromising, physical, style of play, but, on this occasion, they came up against a team which was every bit as physical as they always are, if not the more so.

The first evidence Saints had that we were up against such a well-drilled, enterprising, and committed side, came as early as Josh Johnson’s first bone-crunching hit-up straight from the kick-off, followed in the third minute, when prop, Jack Ormondroyd, made a magnificent thirty metre break through the middle of the field.  Although that came to nothing in itself, with Brodie Croft eventually being held short of the line, the fact that Ormondroyd had torn through the defence with seeming ease, served to inspire the whole side even further.

It was, consequently, of no surprise, when, on a second foray into their hosts’ ten metre area, their slick handling carved out sufficient room for Morgan Escare’s cleverly angled running to get him over the line, and with Chris Atkin’s conversion from his only reasonably positioned goal-scoring opportunity, giving them a six-point lead.

Indeed, if you were looking for an aspect of the game in which Salford were particularly unfortunate, it was that their subsequent two attempts at goal, which included a penalty on half time and a second half conversion, were both considerable distances out.

The game changed, unfortunately, at the mid-point of the half, when carelessness in the timing of their defensive line speed, which throughout most of the game so troubled the home side, on this occasion brought Saints a penalty, at a time when they were being penned back on their line.   In one of their best sets of the match, they gained sufficiently good field position, and possession, to cross for an unconverted try.

Sadly, this proved to be not just one but two, back-to-back, scores, the second of which came most fortuitously for the Saints, from the ball ricocheting at the end-of-set kick, off Escare and into the arms of Welsby, barely a metre from the try line.

The only try of the second half came from Salford, as a result of their continued adherence to their game-plan, in which they had gone head-to-head with St Helens, set by set, giving every bit as good as they were given, in a trial of physicality.

On a couple of occasions Saints were even forced to end their sets with kicks still within their own thirty metre area, while time and again, back would come Salford, to pin them down in their own twenty.  It was from one such set that with the assistance of a set-restart, former Saint, Matt Costello, had the great pleasure of going over in the corner for an equalising try, against his former club

Even after going behind to the two penalty goals, the Red Devils were not finished.  An interception by Chris Atkin saw him race clear over seventy metres, only to be caught from behind less than ten metres from the try line.

The final minute of the half, following the sin-binning of Welsby for the professional foul of preventing a quick play-the-ball, saw St Helens having to resort to using the set-restart rule to their own defensive advantage, by which they limited the number of tackles they had to complete, in the final fifty seconds, to only three, simply by holding tackled players down for several seconds at a time, thereby preventing any properly organised assault on their line, and finally forcing one of very few Salford handling errors, to overcome the threat.

Without succeeding in winning, however, Salford players must have gained considerable confidence from their performance against such illustrious opponents.  The fact that the Saints were able to scrape home, thanks only to two kickable penalty goals in the last ten minutes, tells its own story.  All that is needed now is for this form to be taken into the next few fixtures, starting with our home game with Leeds in a fortnight’s time.