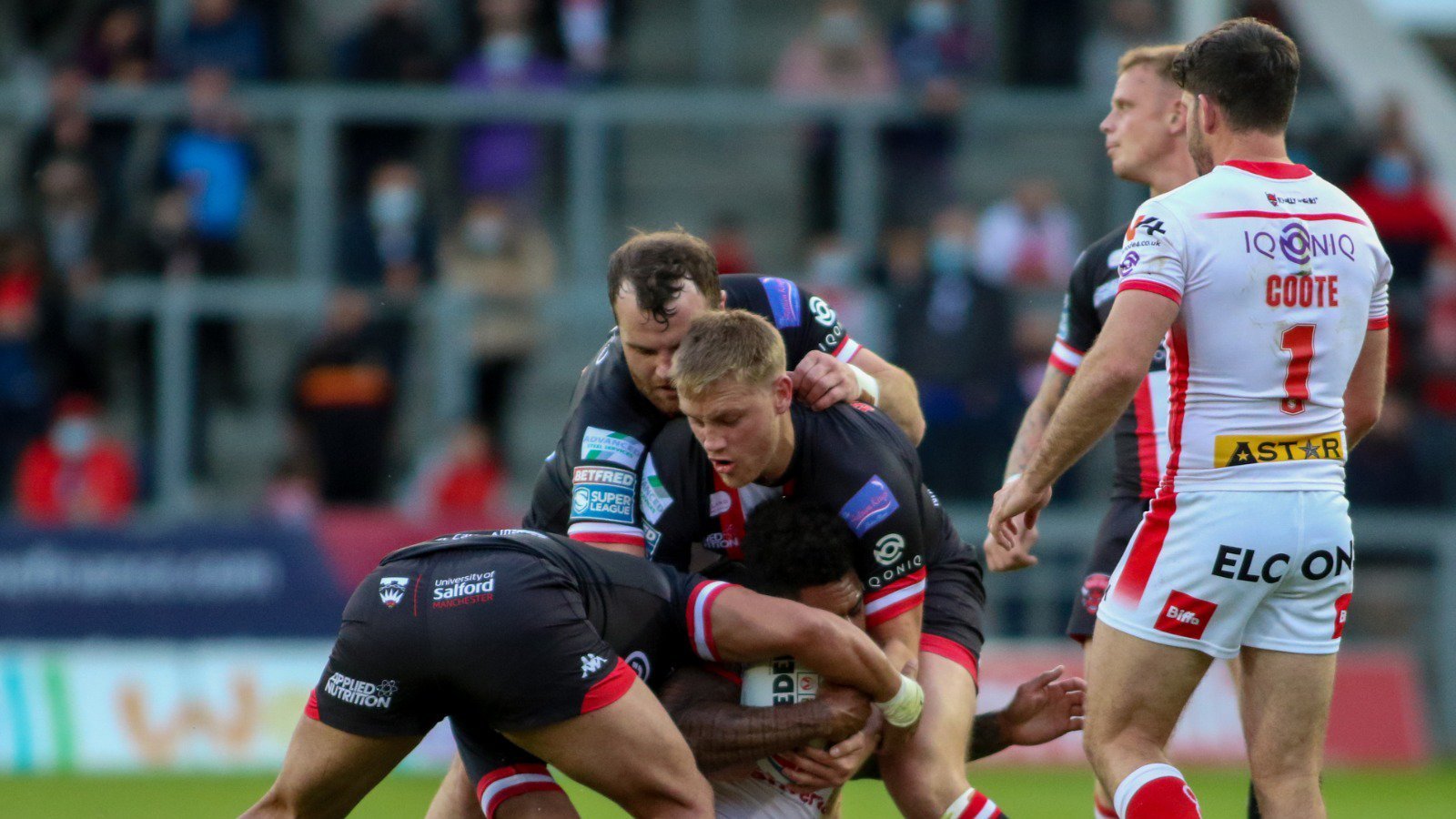 After the most heart-breaking of Betfred Challenge Cup exits against Castleford Tigers, probably the last thing the Salford players needed was to be travelling to face the might of the Betfred Super League Champions, St Helens, ten days later.  If that were the case, however, there was absolutely no evidence of it, whatsoever, in the opening forty minutes, for throughout the whole of the first half, the valiant Red Devils went head-to-head with their hosts, matching their unrelenting, fastidious defence, with an equally uncompromising one of their own.

Indeed, for a full twenty minutes, when both defences were causing significant problems for the other’s attack, it was the Saints who made the first three handling errors, the second of which saw the pitting of the power of Chris Atkins’s magnificent tackle on the man-mountain that is Alex Walmsley, in the greatest mismatch of the evening.

Mismatch, as far as size is concerned, it may have been, but the little halfback got everything just right and the result was the giant prop not only being toppled to the ground but coughing up possession in the first tackle of their set, in the process.  If anyone on the ground had had any doubts about the visitors’ resolve and determination, they were left with none, thereafter, and the Saints continued to struggle to find their attacking rhythm in the face of such determined tackling.

Not that Salford were able to make any in-roads into the St Helens defensive line, either, however, with the home side virtually negating any Reds’ forward advancement up the field, when in possession.  That became equally the case on the occasions when, as a result of penalties or troublesome kicks, Salford got within sight of their opponents’ try line, with a totally flawless goal-line defence keeping them pointless, for the full 80 minutes.

It was 23 minutes of complete stalemate before a try was eventually registered, and, as so often has happened this season, it came as a result of a Salford handling error, whilst on attack in the Saints half, and then, this time, further compounded by conceding a penalty.  If only the Red Devils’ attack could have been as efficient as their defence had been, they really would have caused St Helens some concern, but sadly that was not the reality.

On a positive note, it should be observed that, unlike in many previous games, that first try did not lead to another just before half-time, and it must have been a much happier dressing-room to which the team retired, at the interval, trailing by only six points and still very much in contention.

Sadly, that happy state was not to remain for very long with the home side reappearing determined to increase the pace of the game, to their own advantage, and the next score came within two minutes of the resumption Dispiritingly, it came from one of Salford’s best attacking moves of the evening, with the ball having been moved swiftly to the right wing, where Ken Sio had been freed up to race clear.

The kick he put infield for his teammates to latch onto, unfortunately, stood up beautifully into the arms of Theo Fages, who, with the involvement of two teammates, started, and then finished, a sixty-metre inter-passing run to the line, to double the Saints’ score.

That try, and in particular the circumstances in which it came, proved to be a real game changer, for although it was over a quarter of an hour before they scored again, St Helens went on to notch up a total of five tries, four of which were converted.

The most disappointing of those came on the stroke of time, when Salford, with three seconds remaining, produced some rather static resistance on the right, from a play the ball in front of their own posts.  It would have been a fair reflection of their efforts during the first half, had they snuffed out any chance of conceding again.  As it was, the scoreboard became a rather uncomfortable representation as to how the second half had unfolded.

It would also be true to say, however, that had they been playing any less commanding a side than St Helens, that first half performance could well have paved the way for a deserved victory.