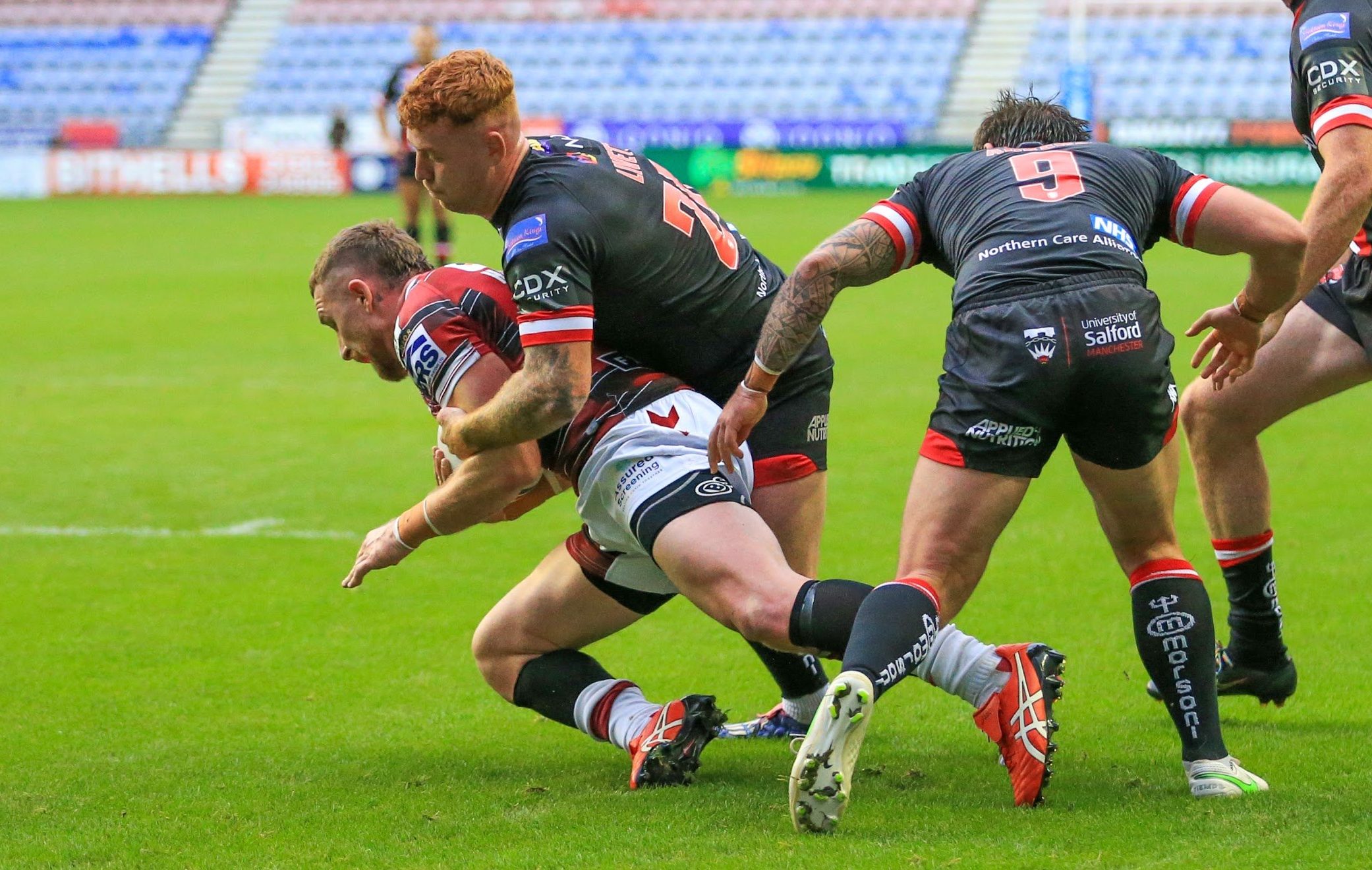 With a two-week gap since their last outing, Salford Red Devils will probably have been glad just to get back to their task of playing a game once again, with this their first return to the DW Stadium, since that magnificent victory over Wigan Warriors in the semi-final of the 2019 play-offs.

Certainly, that appeared to be the case, as they settled into their game in the first half, producing a well organised and challenging opposition to the home side, from the outset, and although the Warriors had a greater proportion of possession, and the better field position in the very early stages, the Red Devils soaked up the pressure, limiting their hosts to a solitary, unconverted try in the right corner, from winger Halsall, on twelve minutes.

From that point, the visitors took control, showing all the positive elements of their defence and attack which had been in evidence, at Leeds, a fortnight ago.  In particular, it was a joy to watch the Salford forwards making such good inroads into the opposition’s defensive line, often turning a difficult start to the set, close to their own line, and finishing it with a kick from within the Wigan half, which, with a good chase, completely turned the tables on the Warriors, leaving them to struggle to get away from their line.

From all the work and endeavour came the reward of points on the board, the first of which came with Joe Burgess’s crossing in the corner, in his first league game against his former club, after good handling through six pairs of hands.

One aspect of their attack which did seem to need some further attention, however, was their ability to score from close range.  On a number of occasions, the Reds got within five or ten metres of Wigan’s try line, only to lose possession early in the tackle count, and that failure to turn position into further points was to cost them dearly as the game proceeded.

Nevertheless, they were able to leave the field at halftime with a two-point lead, courtesy of Harvey Livett’s last minute penalty goal, which compensated for his missed conversion attempt earlier, and enthusiasm for a second victory on Wigan soil must have begun to grow among the Salford faithful.

Sadly, this time the Reds had merely flattered to deceive, as they failed to live up to the expectations they had placed upon themselves in the first half.  In retrospect, it may appear to be that Wigan simply upped their game, and that Salford were unable to compete with them, thereafter.

That, however, would be an over-simplification of events, particularly at the start of the half.  Yes, Wigan did become rather more mobile in defence, and increased their line-speed to try to apply greater pressure, but possibly more importantly, the Red Devils fell away from the good things which they had produced to such fine effect in the first forty.

Errors with ball in hand started to become more evident, providing the Warriors a much more unequal level of possession, and an almost constant foothold in the Salford half, all of which led them to drift away from the game plan, with players trying to fix things in their own way, thereby causing at least a little confusion among the rest of the team.

Most discouragingly, the discipline, which they had shown throughout the opening stanza, deserted them, and the penalty count started to rack up against them, not, thankfully, compounded by dissent this time, for they left Lee Mossop to carry out his role, as captain, of seeking clarification from the referee, on certain decisions.  Poor execution and judgement were the main causes, especially once Jackson Hastings was moved to half back bringing a new dimension to Wigan’s attack, and the Warriors were only too eager to keep their score increasing, by slotting over three kickable attempts.

Although no longer classed as a penalty, infringements at the ruck are still punished by set restarts, the extra tackles from which add quite significantly to the fatigue and pressure on teams, particularly when the restart comes on the final tackle of a set, as happened on three occasions in that second period.  With so much turning against them it has to be said that the Salford defence did exceedingly well to keep their line intact until twenty-seven minutes after the restart, when John Bateman successfully squeezed through.

Most, on Friday evening, will have felt an over-riding feeling of disappointment that having done so much to put themselves in such a good position, the team fell away somewhat in the second half.  That in itself is an extremely strong indicator of the considerable progress the club and the team have made in recent years.