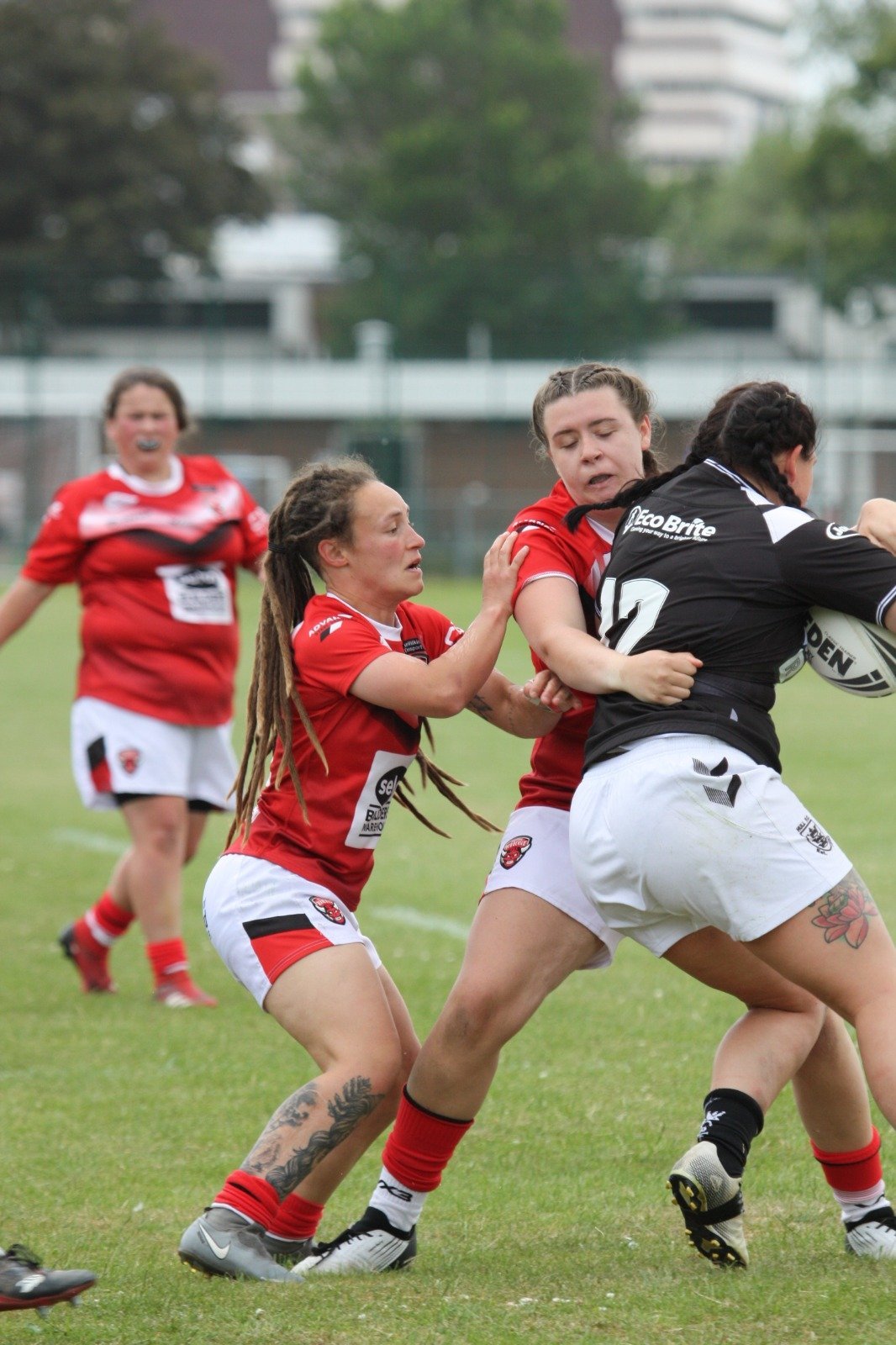 On the back of their magnificent victory at Hull KR, a month ago, the Red Devils returned to Humberside, yesterday, to chalk up an equally impressive result, this time on the western side of the River Hull, against the black & whites of Hull FC.

As has been the case with a number of their outings, the Salford players were a little slow in getting into their stride, and it was the home side which had the better of the early exchanges, having ample possession, with which to challenge the visitors’ defence, over the first ten to fifteen minutes.

The Red Devils were, nevertheless, able to keep their opponents at bay, although not without the adversity of losing their highly-rated fullback, Luci McKeown, quite early in the proceedings, with a leg injury, from which she did not return.  As a consequence, some hasty rearrangements to the line-up needed to be made, with her replacement, Brogan Evans coming on as hooker, Taz Corcoran moving to loose forward, both of whom made considerable impact on the game, and centre, Alex Simpson, taking over at fullback, from where she scored a most spectacular try.

The team had spent the week’s training sessions undertaking work to increase the intensity of both their attack and defence, particularly, but not exclusively, among the forwards, who were also buoyed by the return of Megan Condliffe, who had missed the last two matches.  The considerable success of all this became evident as the game progressed, with the pack laying the foundations of the victory with their strong drives up the field, and the hard tackles with which they hit their opponents.

It was as a consequence of this that almost all of their eight tries came initially from those hard metres they made in the early parts of sets, which sucked the Hull players into the middle of the field, whereupon the Reds were able to send the ball out wide to the backs, who then had sufficient room to combine with one another to produce the collection of tries, which ensued.

One in the first half, which was slightly different from the others, however, was their second, which came as a result of slick, left to right, cross-field, handling, which eventually produced an overlap for right wing Lauren Ellison to go over.

The one drawback from their overall style of play on the day, was that not a single try was scored near the posts, making the possibility of a conversion somewhat remote, and indeed they were successful in only two of their kicks, one each from Kayleigh Bradshaw and Demi Jones, both of which were in the first half, to ring up a 20-0 half time score alongside tries from Louise Fellingham (2), Sarina Tamou, and Ellison’s above mentioned score.

With Salford’s first touch of the ball in the second half, Alex Simpson went much of the length of the field, after taking the ball from Hull’s end-of-set kick, to continue the succession.  To complement their earlier successful goalkicks, Jones and Bradshaw also crossed, followed by Steph Gray to complete the set.

With the Yorkshire side still without a point, hopes were high that the Reds could return home having secured their first nilling of an opposition.  To their credit, however, Hull regrouped for one last minute assault on the Salford line, and succeeded in going over for a try close enough to the posts for it to be turned into a six-pointer, which meant that the nilling would have to wait ‘til another day.  That, though, certainly did not detract from the most impressive, and highly entertaining, performance of the Salford side, who will now travel to Widnes, next Sunday, for what is expected to be one of the most keenly fought encounters of the season.