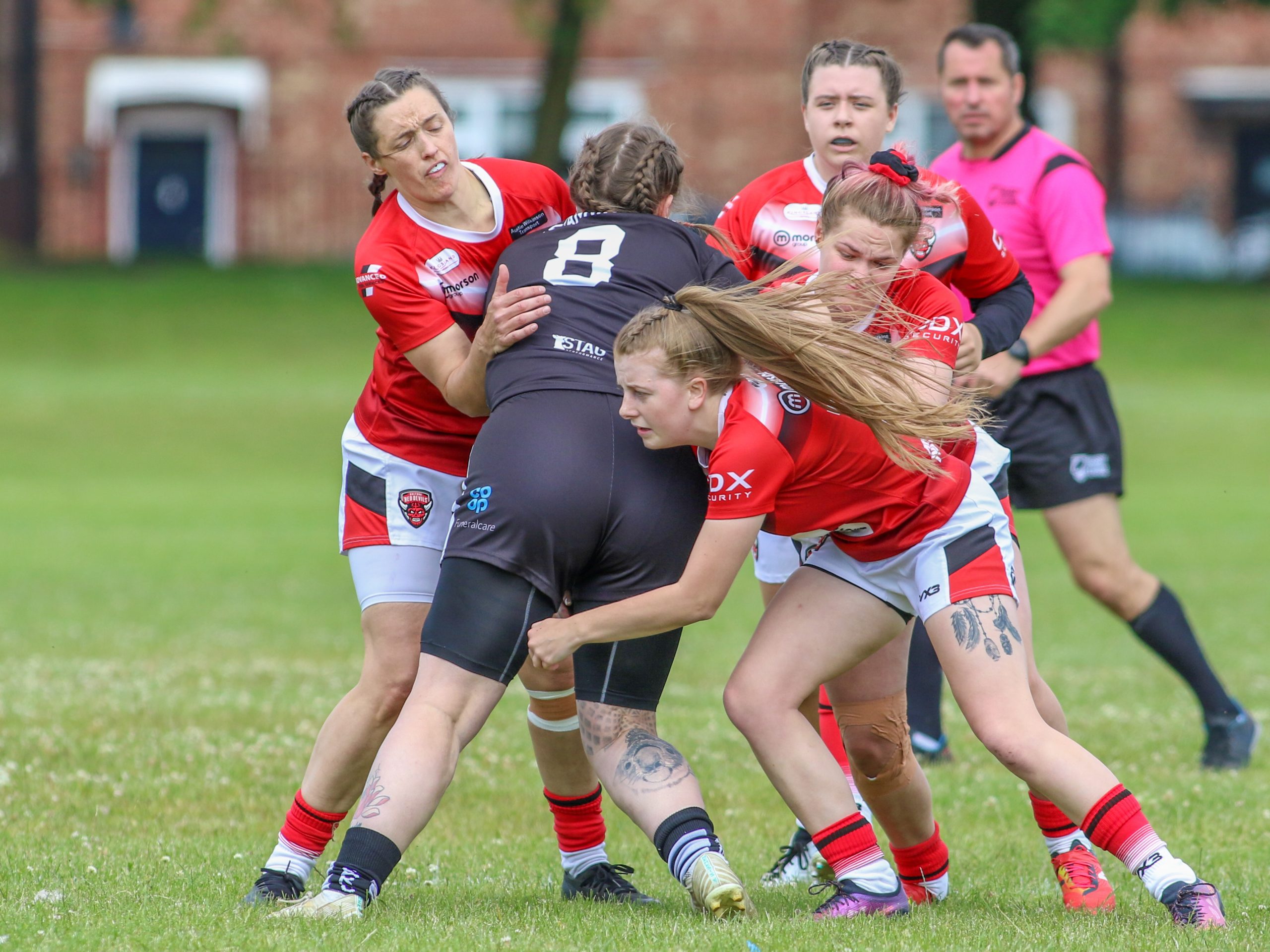 Following two outings in which the Salford side have made rather slow starts to each game, in this latest encounter with visiting Stanningley, they went to the other extreme of scoring all but six of their twenty-two points in the combined first, five-minute periods of each half.  The return of four key players, who had missed the recent reversal at Oulton, buoyed the team for what was only their second home fixture.

The game had been underway for barely forty seconds when the visitors were dealt a severe blow, on the fourth tackle of the first set, in which one of their players was carried off having sustained a serious ankle injury, which required hospital attention.

It took a mere two minutes, after the resumption of play, for the Red Devils to open their account.  Good handling, from right to left, put fullback, Luci McKeown, in the clear down the left flank, and her onward pass to Alex Simpson, enabled the centre to make a most unexpected change of direction.  With everyone expecting her to go for the corner, she cut back inside at a surprisingly acute angle, where there was enough space for her to coast through and score by the posts, giving Demi Jones a simple conversion.

Retrospectively, to have scored so early, and seemingly so easily, was possibly not the best thing for the team, who, mistakenly as it turned out, assumed that they would be able to score almost at will.  In fairness, that was probably the assumption on the side-lines as supporters eagerly awaited a volley of scores.

Instead, however, when the stubborn Stanningley defence thwarted the next assaults on their line, an element of frustration crept in, which led to a number of handling errors, giving the visitors an ample supply of the ball.  The consequent growth in their self-belief made them more and more of a threat, and there were several close calls on the Salford try-line, most significantly when their left winger crossed in the corner, only for her opposite number, Lauren Ellison, to cause her to lose control of the ball, as she went to ground it.

Despite the seemingly incessant pressure they were under, the home side stood firm.  Their defence was tested on several occasions, yet they still managed to keep their line intact, and there were some really hard tackles, some of which forced a loss of possession.  Two of the more eye-catching came from second rower, Serina Tamou, who, herself, had to retire temporarily to the side-line with a hand injury, while the above mentioned try-saver, by Lauren Ellison, was only one of a number of hard hits she made on other players, some much bigger than herself.

The lack of any further score was, however, a matter of some concern, with the Red Devils having the benefit of the downward slope of the pitch.  Six points was barely a lead at all, and one would have expected that they would have been turning round at the interval, at least two or three tries to the good, if they were going to withstand the forays of attacks, which the visitors would surely send their way, when going downhill in the second half.

When, therefore, Salford were awarded a penalty in front of the posts, on 38 mins, they most sensibly chose to take the two points, but concerns must still have remained, over the interval, that this would be insufficient to win the game.

Early in the game as they had scored at the start, they were even quicker in the second half to do so.  Having received the ball from the kick off, the forwards made a series of four tremendous carries upfield to take the game to the Stanningley, twenty metre line where the ball was moved swiftly along the line to the right, via Louise Fellingham, Abi Collins, McKeown, and Taz Corcoran, to feed Steph Gray to extend their lead to twelve points.

The half time team talk had clearly been about making metres up the hill, when in possession, and from the resumption the forwards took over once again, until, from dummy-half thirty metres out, McKeown caught out the first line of defence with a scoot, before then rounding the fullback, to score under the posts, giving Jones an easy conversion.

Even at eighteen points down, the Stanningley team were not going away, and not having touched the ball in the half, were determined to make a game of it, once they did, when it became back to the hard graft of defence, with McKeown’s upending of her opposite number, in full flight down the field, being among the most notable.

Nerves, however, started to twitch as the half went on with the pressure on them growing, and it was no surprise when the visitors eventually got on the scoreboard at 18-6, on 52 mins, and then narrowed the margin further to 18-10, eight minutes later.

It was at this point when the team really showed its character.  As in the past, instead of panicking, they just took control, set up an attack with Casey Naylor using her power and strength to force herself over, after receiving a quick pass from Corcoran at dummy half, for her first try in a competitive game.

The twelve-point lead that this restored proved to be crucial, as yet again, Stanningley launched another successful attack to have the final say, on seventy-two minutes, but with Salford then holding out for the remainder of the game.

Thank you to Steve McCormick for photograph, above,  showing Salford’s defence at its best, with, from left to right, Captain and Player of the Match Louise Fellingham, Abi Collins, Helen Walker, and Taz Corcoran