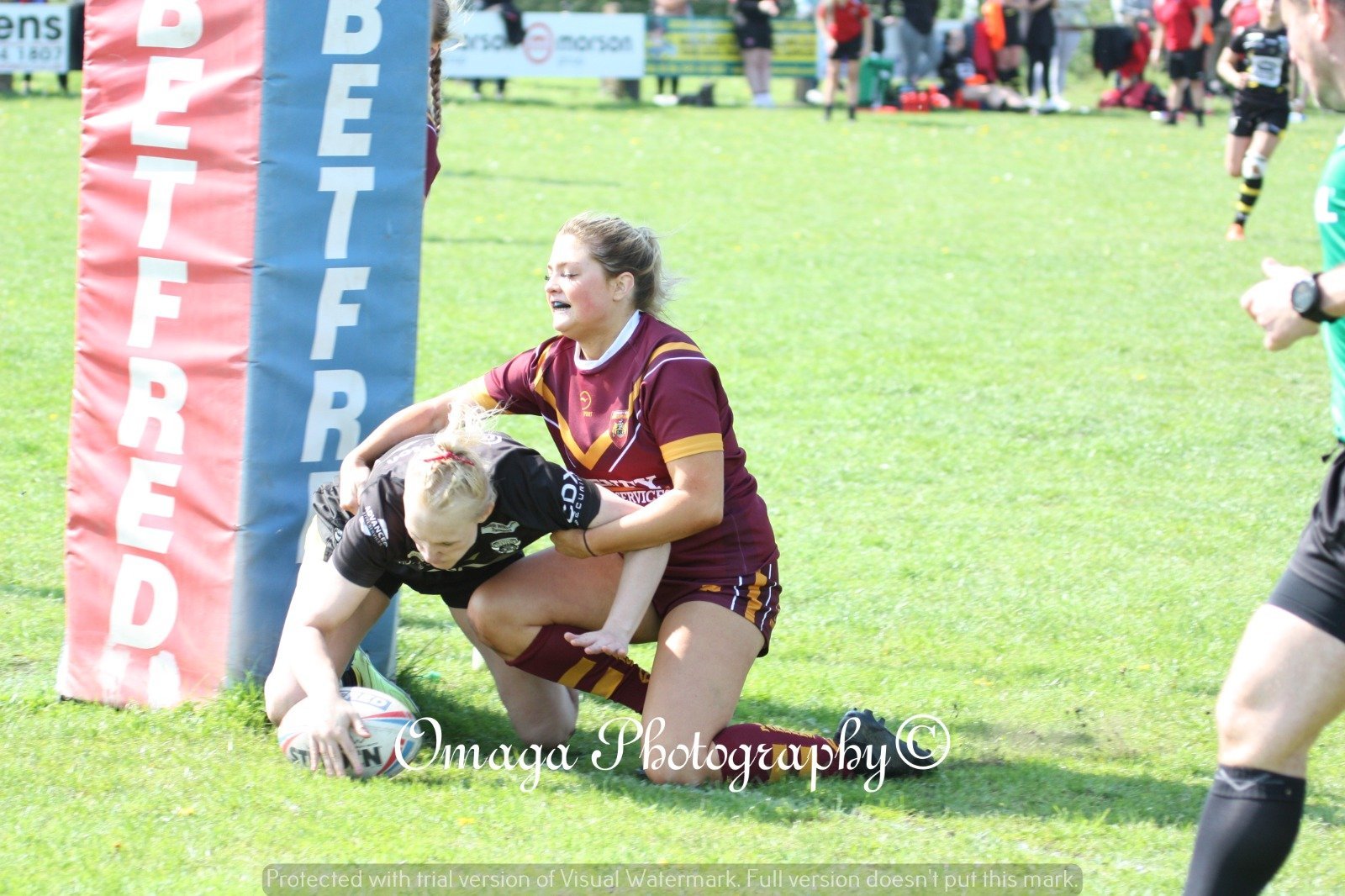 A most spirited rally, in the final quarter of the game saw Salford’s women’s team continuing their successful start to the season, with a twelve-point victory, sealed by a brace of tries from full-back, Steph Gray, both of which were converted by Demi Jones.

With a number of their regular players missing, there was a slightly makeshift look about the team sheet, but, in fairness, every member of the side, whether newly in, or operating in a different position, came through with credit for their commitment to the cause, and for the way they all gelled together to secure the win.

It was a dream start to the game, for the Reds when first, the Dewsbury kick-off went straight into touch, and, from the ensuing penalty, Salford were well positioned to set up a series of attacks on the visitors’ line.  It took until the fourth minute, only, for them to open their account, with an excellent end-of-set cross-field kick finding the arms, of right centre, Lauren Ellison, who caught and grounded the ball in one single movement.

With a 4-0 advantage, and playing down the Schofield Rd slope, spectators eagerly awaited further tries to follow, but a combination of handling errors, which occurred whenever they got near to the Dewsbury line, compounded by a considerable number of penalties, primarily for offside and high tackles, let Dewsbury back into the game  It was from one such handling error, followed by two, late in set, penalties, that the visitors had sufficient possession to force an overlap, to draw level.

Buoyed by this success, the Yorkshire side continued to enjoy sufficient possession from further penalties to put Salford under significant pressure for several minutes, even forcing a goal-line drop-out, in the process.  What was significant, however, was that the magnificent Salford defence was able to soak up these continual assaults on their line, without conceding any further points.

Eventually, on 34 mins, they set up an attack which was not flawed by any errors, as the ball was moved, most tellingly, along the line to produce a three to one overlap, which provided left centre, Alex Simpson, with a try-scoring opportunity in the corner.  Most remarkably, Jones was successful with the conversion from the touchline, which sailed between the posts, to set up a 10-4, half-time scoreline.

The game really appeared to have swung in favour of the Red Devils, shortly after the restart, when cleverly- angled running by second rower, Viki Kini, opened up the defence on the right-hand side to set up Ellison, with her second try, goaled once again by Jones. 16-4

What had seemed to be a fairly comfortable lead at the time proved to be anything but, on 59 mins, when Dewsbury scored the second of two tries within three minutes of each other, and the successful conversions bringing the sides level.

Nothing can be more dispiriting than to see your lead eradicated completely, and the game was at the point at which it could have gone either way.  Dewsbury, with their tails up, and the benefit of the downward slope must have really fancied their chances, while the Red Devils were up against an uphill slog, in temperatures which had changed by a whole season, during the course of the afternoon, and in the hot sunshine they were finding the going most energy sapping.

This was when the team really showed its character, determination, and on the back of these, its confidence.  Alex Simpson, it was, who set the ball rolling, with a tremendous break from within her own twenty, to be tackled near to the half-way line, to the left of the field.  Taz Corcoran took up the baton from there, with a super scoot towards the visitors twenty, and a couple of tackles later Gray scythed through the middle for the first of her match-determining brace.

Every member of the side did their utmost to bring about the victory, and all can feel pride not just in the result but in their contribution in overcoming adversity at various stages of the match.  It is something they will be able to take into their next encounter, in the League Cup tie, away at Illingworth, next week.

PHOTOGRAPH: Courtesy of Sean Monks, with our thanks

Steph Gray grounding the ball firmly between the posts