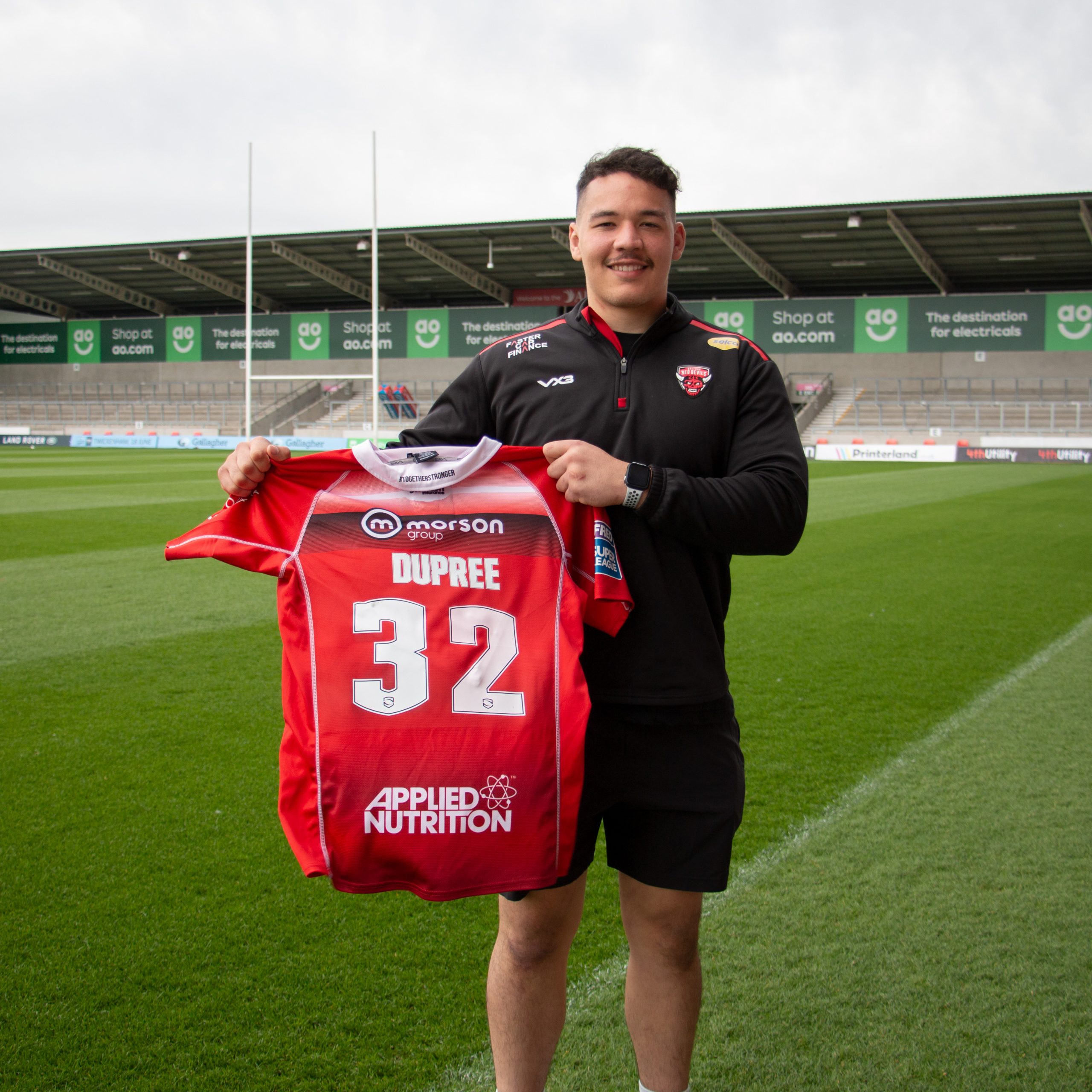 Salford Red Devils are pleased to announce the signing of young prop Tyler Dupree from Widnes Vikings until the end of 2023.

The 22-year-old started at Salford’s scholarship six years ago before joining Leeds Rhinos’ academy. Prop Dupree then had spells at Featherstone Rovers, Batley Bulldogs and York City Knights before signing for Oldham Roughyeds for the 2021 Betfred Championship season, finishing that year with the competition’s Young Player of the Year Award.

Dupree was then picked up by Widnes Vikings ahead of 2022 and after a number of impressive performances for the Championship side, has earned his chance in the Betfred Super League.

In 34 career appearances so far, the young forward has scored an impressive 14 tries.

Speaking on signing for Salford, Dupree said: I’m really excited. Playing in Super League is what I’ve been working towards.

“I’m ready to work hard and make an impression. I’m here to take the rough with the smooth, take it day by day and just enjoy it.”

Dupree is looking forward to working with Paul Rowley and is ready to show the head coach what he is capable of.

“Rowls (Rowley) has been honest, straight to the point and has told me what he wants and expects from me for the rest of this season and next. I’m really looking forward to working under him.”

Head coach Paul Rowley said: “The playing group and staff are pleased to welcome Tyler to the club and look forward to him challenging for a spot. He has fantastic attributes to play in the middle and our environment will provide him the ideal platform to progress and fulfil his potential.”

Director of rugby and operations, Ian Blease, commented: “The addition of Tyler is a great bit of business for Salford, to sign such a talented and enthusiastic rugby league player who is still very young.

“He’s really established himself as a quality player over the last couple of seasons and I’m excited to see him get a well-deserved shot in Super League.”

As part of the deal, Josh Johnson will go the other way and link-up with Widnes immediately.

Johnson arrived at the Red Devils during the middle of the 2019 season, playing a part in the  Red Devils’ run to our first ever Grand Final in October of that year.

The following season, Johnson was part of the squad that propelled Salford to their first Challenge Cup Final in 51 years.

On Johnson’s departure, Rowley commented: “The playing and coaching staff wish Josh the best of luck at his new club. He’s been a very popular member of the team for several years and leaves with all our respect and continued friendship.”

Director of rugby and operations, Ian Blease, added: “Josh has been a great part of our team, especially in the run-up to both the Grand Final and Challenge Cup Final.

“I wish Josh all the best and I thank him for his fantastic service to Salford. I’m confident he will thrive at Widnes.”