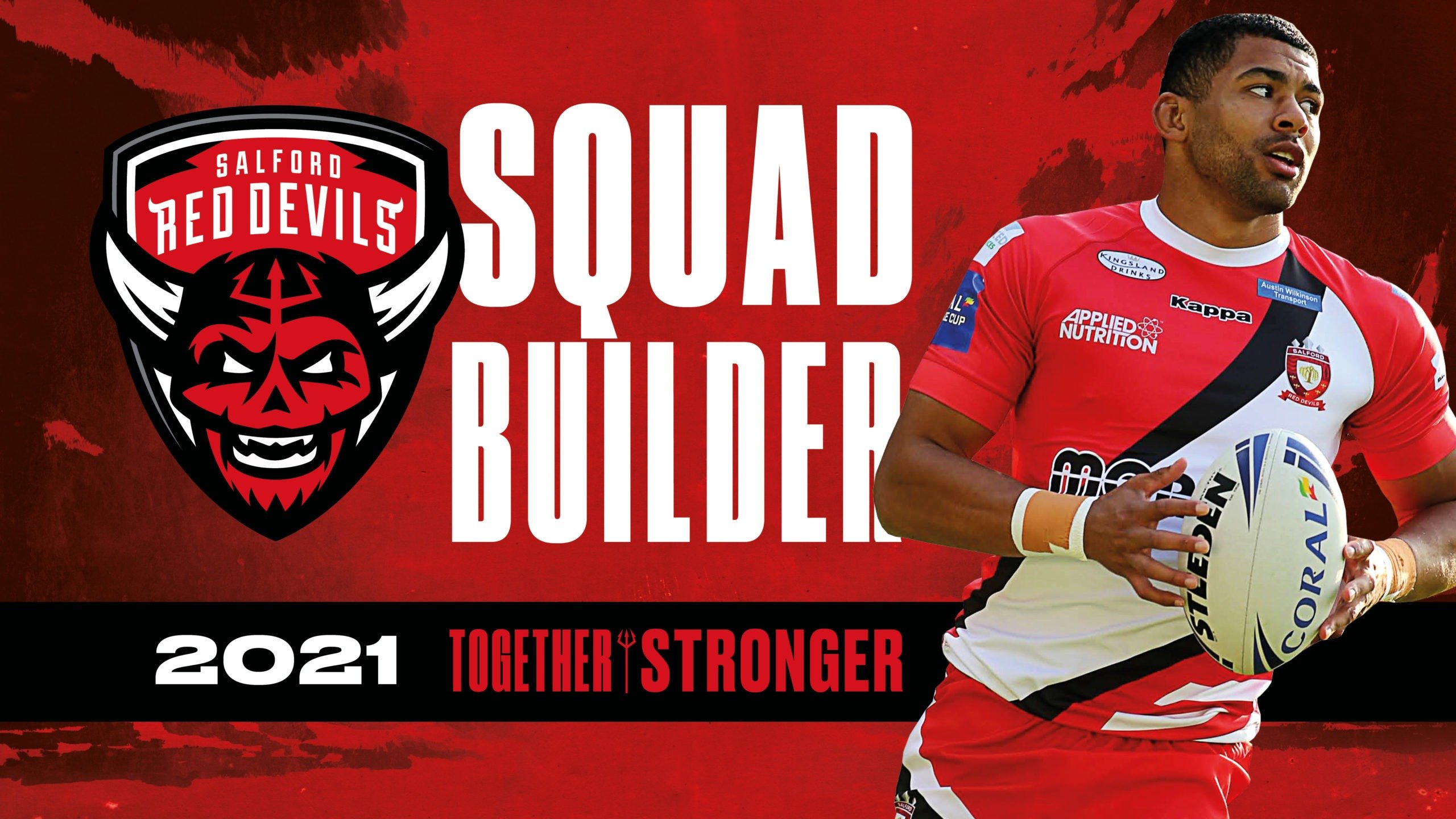 Salford Red Devils are excited to announce the relaunch of our Squad Builder scheme ahead of the 2021 season.

Since the scheme was introduced ahead of the 2019 season, Squad Builder members have helped bring some big names to the AJ Bell who have had an impact on the Club’s recent progression, with Kallum Watkins the most recent addition.

In the past two seasons we have found ourselves in back-to-back major finals which is a testament to the Club and all its supporters.

Behind-closed-doors games last year made it challenging as many of our income streams were restricted. But, thanks to you, the fans, who helped out massively with season ticket donations, virtual matchdays and Squad Builder, we not only survived but we reached Wembley for the first time in over 50 years.

Head coach Richard Marshall has collated a strong backroom team and has further aspirations for our already established squad, so we appeal to you once again to help build further on the progress we have made by becoming a 2021 Squad Builder member.

Salford Red Devils Managing Director Paul King said: “Now more than ever the Club needs the fans to once again get behind us and help create the environment to breed further success.

“The global pandemic has been challenging, we appreciate fully how incredibly difficult it is for everyone right now but I urge you, if possible, support this initiative to enable the Club not only to survive but to thrive.

“We have all greatly enjoyed our recent successes on the field of play, with the continued support of our loyal fanbase we believe we can kick on and continue to challenge for honours in 2021.”

This year we are giving all Squad Builder members free RDTV from February 21st 2021 through to February 22nd 2022, where members will be able to see all club features, press conferences and previous games.

Squad Builder also gives you the opportunity to bring a friend to games, with game vouchers issued once we are aware of the fixtures and have identified what matches these vouchers can be valid for.

For Gold Squad Builder members, we will be issuing a limited edition signed Salford Red Devils ball in approximately July of this year.

All members will also receive a Squad Builder t-shirt and we will be in contact regarding sizes in the near future.

We hope to be able to offer much more as the season develops and restrictions are lifted and we thank you all once again for your incredible support both on and off the terraces. We can’t wait to have you back with us in person!

Due to government restrictions supporters are not allowed to attend the ticket office in person. However, Squad Builder can be paid for outright online now and from the AJ Bell Stadium ticket office from 9am tomorrow by calling 0161 786 1570, and selecting 1 for tickets and 1 for Salford Red Devils, or by emailing ticketoffice@ajbellstadium.co.uk ,

Monthly Direct Debit payments can also be made, meaning supporters can spread their payments, with the final payment being on the August 15th 2021. This can be done also by following the methods above.

The Squad Builder price categories are split into Gold, Silver and Bronze, to allow fans with different financial situations to support the club accordingly.

The ticket office is open for phone calls and emails from 9am-5pm Monday to Friday.