Salford Red Devils Head Coach Ian Watson feels his side ‘got what they deserved in the second half’ following a 34-2 defeat to Betfred Super League leaders St Helens.
Watson said: “I thought we got what we deserved in the second half.
“First half we were really good. The difference between the teams for the first sixty minutes was the discipline and Ben Barba to be fair his quality kind of shone.
“The way he came up with his tries the one of the offload from [Alex] Walmsley and the one where he beat [Craig Kopczak] Koppy on his inside shoulder I just thought that was kind of the difference along with our discipline.
“We defended really well in large parts but then we gave penalties away on tackle four and five so not only are we ending up defending one set but two sets to every set that we had.
“If you keep doing that then your defence is fatigued and that’s what you saw in that second half.
“I think first set they completed, we completed ours and on the next one we gave a penalty away on tackle four and then they got a repeat set from a poor error not letting the ball bounce dead and they scored on the back of that.
“We got what we deserved because we weren’t resilient enough as a team to get the result but I think Ben Barba was the one who stood out along with our discipline.
“We were talking [post-match] about having that resilience about us when things aren’t going our way we can’t just shut up shop and put our heads down.
“We’ve got to fight for what we want to get out of the game and out of the season really and I thought we just kind of lacked that a little bit but discipline was the issue today.” 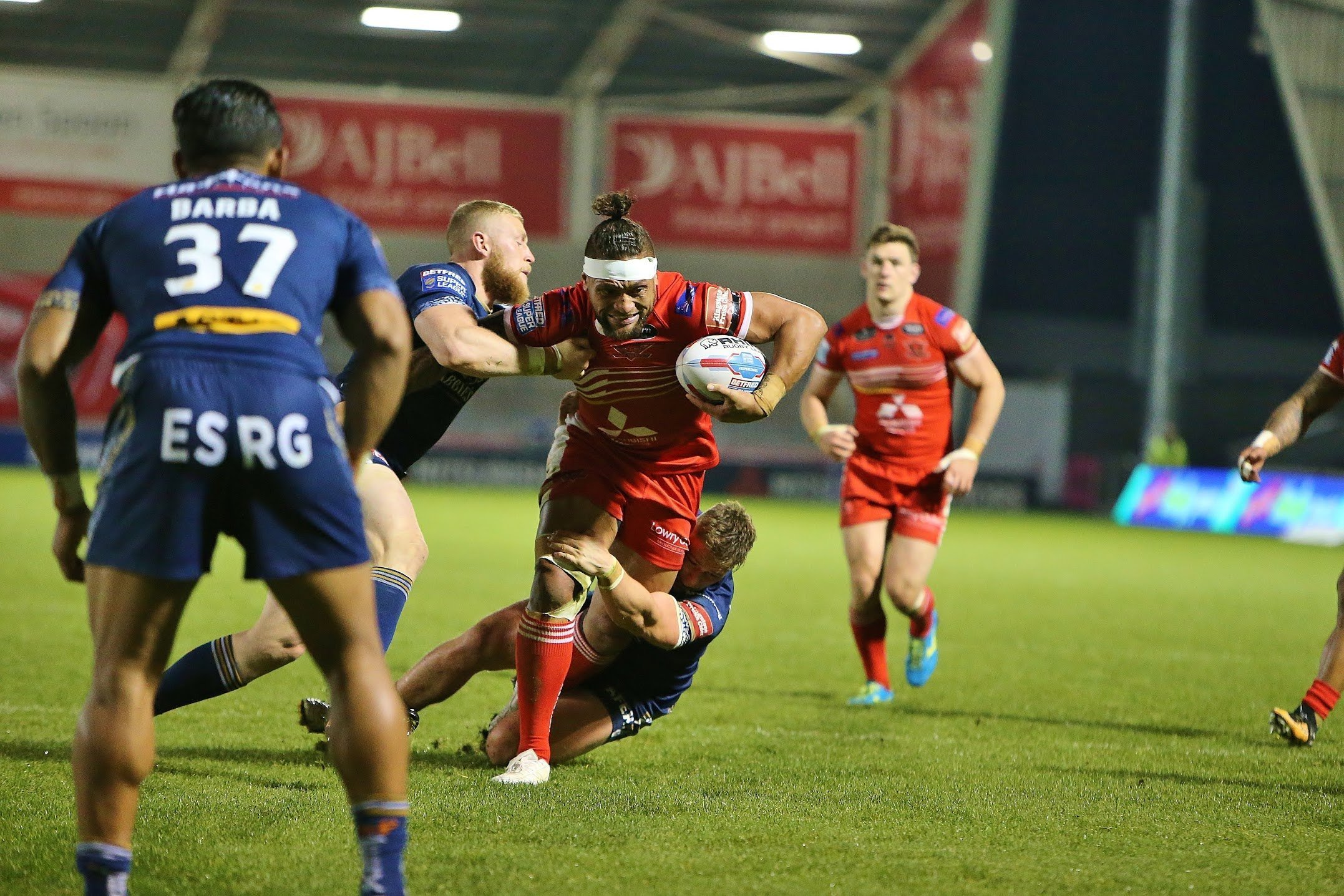 Salford fell to defeat in their final game of the 2017 season, despite a valiant effort with twelve men for 45 minutes, against a St Helens side who confirmed their place in the top four.
Ryan Lannon was sent from the field towards the end of the first half but the Red Devils dug deep and only trailed by eight points heading into the final twenty minutes. However, the extra man eventually paid dividend for St Helens who ran out 4-30 winners.
It was actually Salford who took the lead early on as a flowing move saw the ball shipped from left to right before full-back Niall Evalds hit the ball at pace and stepped his way over. However, Gareth O’Brien’s conversion attempt was unsuccessful.
While it was the Red Devils full-back who scored early on it was Saints’ full-back – and mid-season signing – Ben Barba created their first. Barba weaved his way around the Salford defence and Mark Percival finished in the corner but the centre couldn’t add the extras.
Manu Vatuvei went over in the corner with ten minutes of the half remaining but video referee Phil Bentham ruled it out as Vatuvei was adjudged to have knocked-on in the build-up. Unfortunately, for the Red Devils St Helens went down the other end and scored as Alex Walmsley barged his way over from close-range.
Moments late Walmsley looked to lead with the elbow which sent Jordan Walne off for a concussion check and forward couldn’t return to the field for the remainder of the game. However, James Child only put the incident on report. But, he did make the decision to send Lannon from the field a minute later for a late challenge on Theo Fages following the Frenchman’s kick.
After the interval, the Red Devils defended bravely keeping St Helens out for seven goal-line defensive sets and kept in touching distance until the final twenty minutes. Zeb Taia managed to break Salford’s resilience as he spun over the line. With ten minutes left Walmsley forced his way over for a second before Barba jinked his way over to seal St Helens’ place in the top four.
Salford: Evalds, Bibby, Welham, Sa’u, Vatuvei; Lui, O’Brien; Murray, Tomkins, Hauraki, Murdoch-Masila, Jones, McCarthy. Interchanges: Kopczak, Brining, Lannon, J. Walne.
Saints: Barba, Makinson, Morgan, Percival, Grace; Fages, Richardson; Douglas, Roby, Thompson, Taia, Knowles, Wilkin. Interchanges: Smith, Walmsley, McCarthy-Scarsbrook, Peyroux.