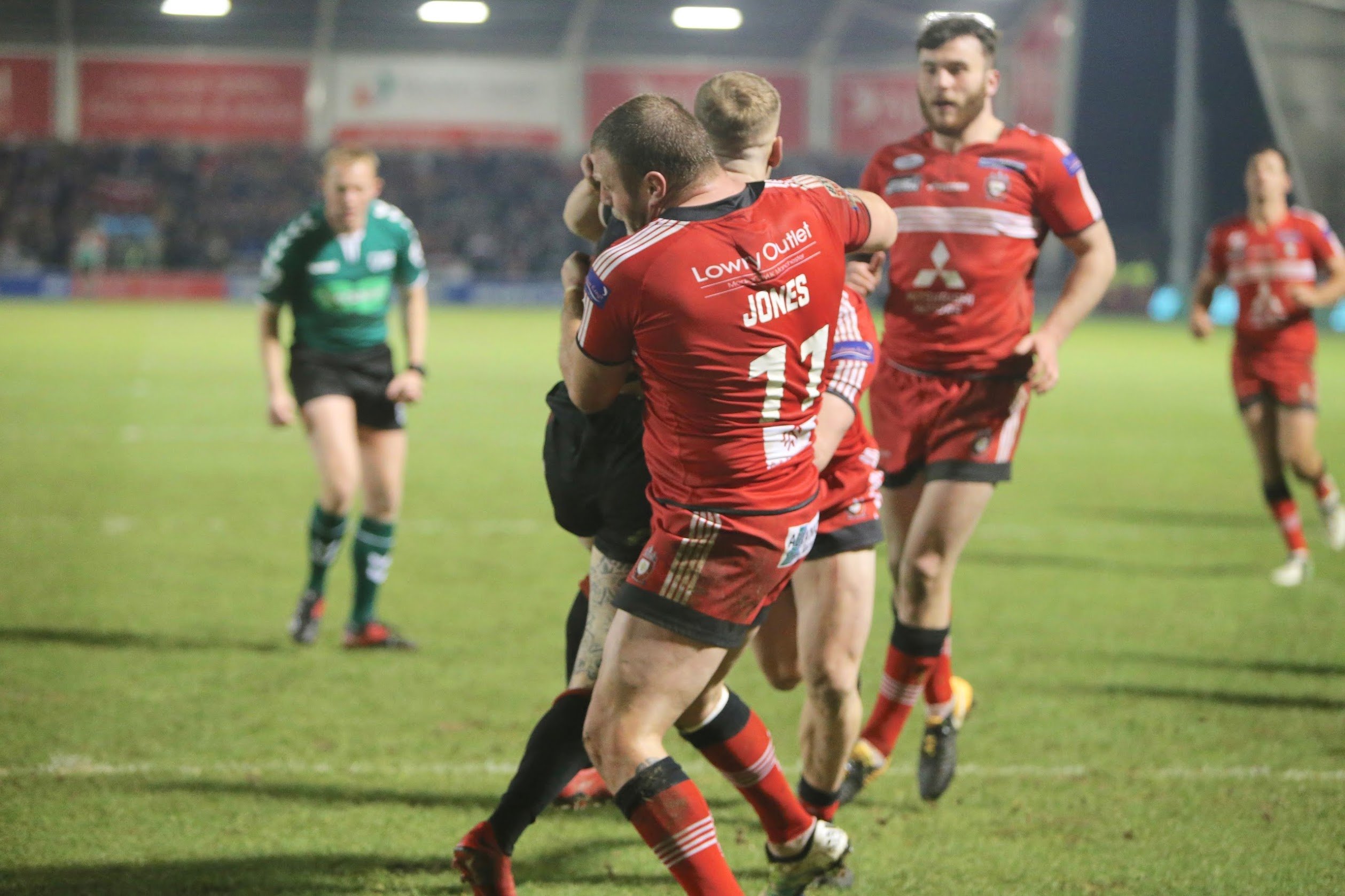 Ahead of Sunday’s Betfred Super League clash with Castleford Tigers at the Mend-A-Hose Jungle we take a look at the facts behind the fixture.
Head-to-head
Salford and Castleford have had a real share of the spoils over the last two seasons with The Red Devils coming away with three wins from six and The Tigers claiming the other three victories.
Ian Watson’s side were the first team to overcome Castleford in the 2017 Betfred Super League thanks to a late Gareth O’Brien drop-goal in March at the AJ Bell Stadium. However, the Red Devils lost back-to-back games against Castleford in the latter stages of last season.
Salford’s last victory at the Mend-A-Hose Jungle came back in 2016 as the Red Devils ran out convincing 32-16 winners – this was the Club’s first win at Castleford since 2004. Salford’s best run of results against Castleford in the Betfred Super League era came in 2004 when they won three consecutive games against the West Yorkshire side.
Try-Scoring
Salford and Castleford over the years has had some high-scoring affairs with seven of the last eight games having a combined score of 27 or more points.
This has allowed for some fairly frequent try-scoring which has seen at least one player grab at least a brace in each of the last eight meetings, also. Zak Hardaker, Greg Eden and Joel Monaghan all scored doubles for Castleford in this fixture last season while Ben Murdoch-Masila crossed twice in a 13-12 victory.
Junior Sa’u, Josh Griffin and Kevin Locke have all notched braces for Salford in the fixture since 2015 while Jake Webster, Denny Solomona and Ashley Gibson have all scored doubles for The Tigers. Solomona scored a brace twice in the fixture in this period. Justin Carney is the only man to score a brace for both Salford and Castleford in this time.
The fixture is also one for the backs with the forwards scoring just three of the last 24 tries in this fixture. Murdoch-Masila scored two of these while Paul McShane crossed for Castleford. There was a total of 13 different try-scorers in this fixture last season.
Milestones
Salford Red Devils back-rower Josh Jones is set to make his 150th Betfred Super League appearance if selected for Sunday’s game. Jones featured in the Betfred Super League on 97 occasions for St Helens and has now made 52 Betfred Super League appearances for Salford.
Castleford winger Greg Minikin could make his 100th career appearance this weekend. Minikin has played 49 games for The Tigers alongside seven dual-registration appearances for Batley whilst at Castleford. Minikin signed from York for whom he featured 43 times. 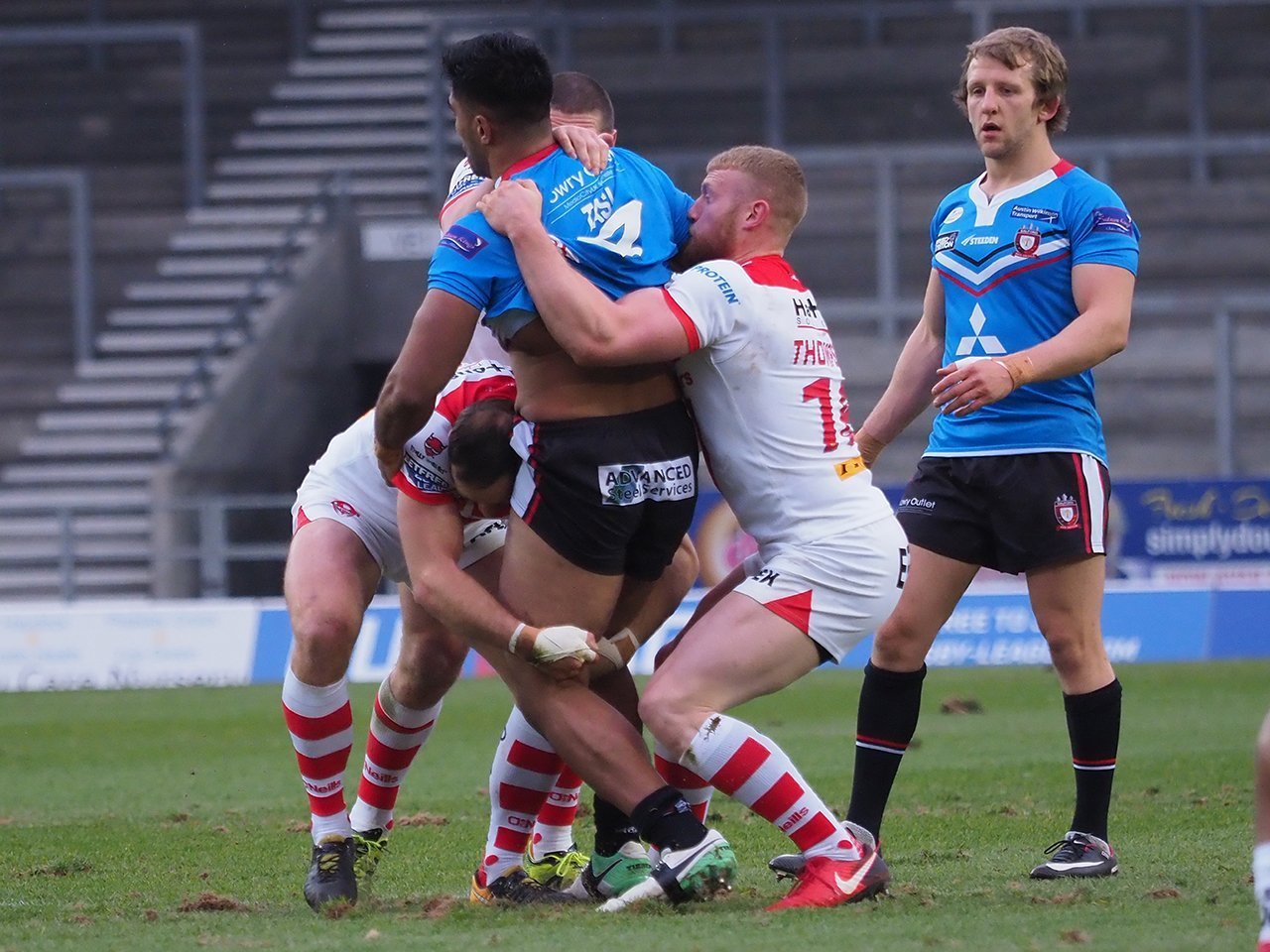 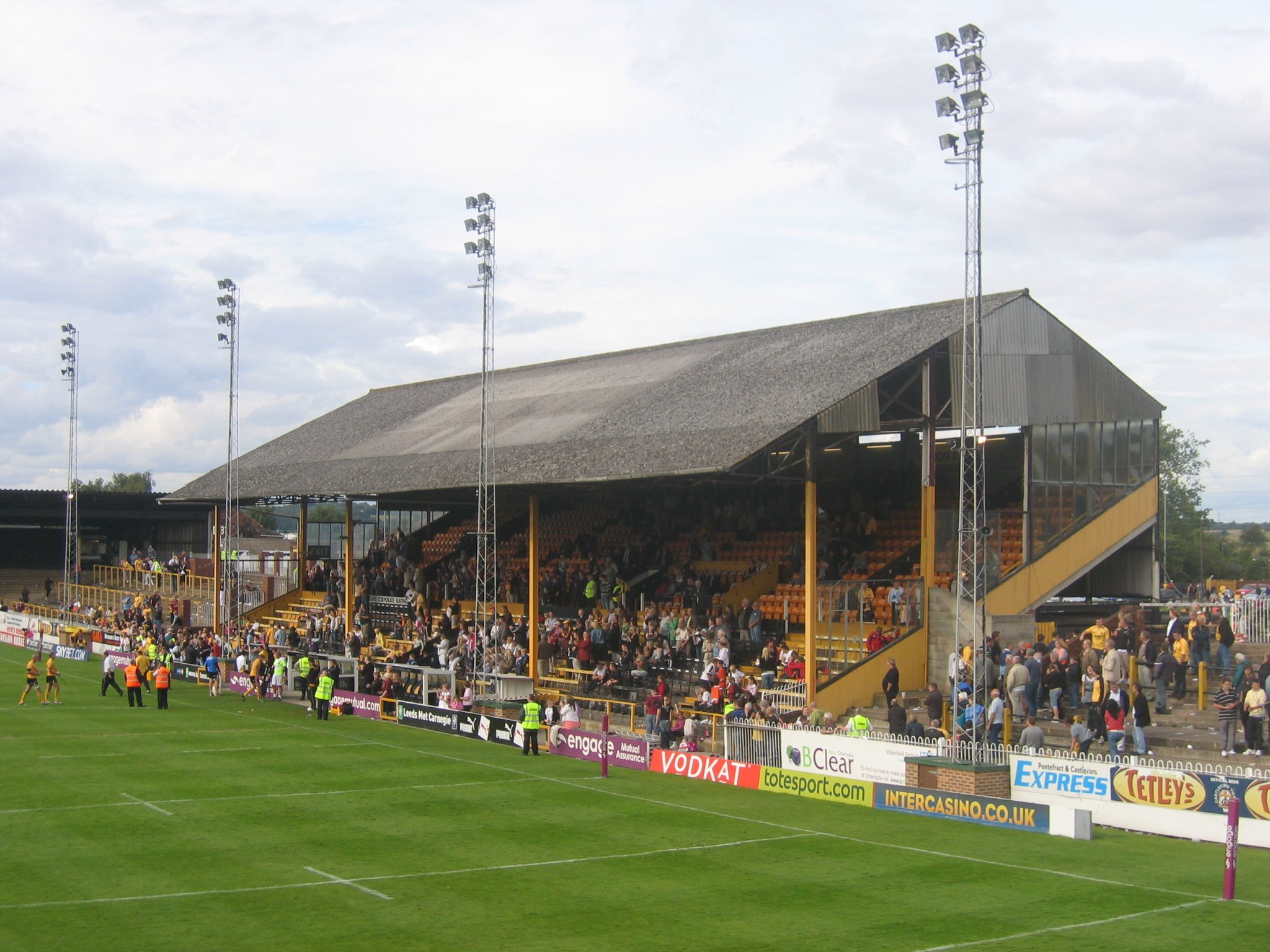 Purchase your tickets for Sunday (11th March) afternoon’s Betfred Super League clash with 2017 League Leaders’ Shield winners Castleford Tigers at the Mend-A-Hose Jungle, 3:30pm kick-off.
Tickets are available from the AJ Bell Stadium Ticket Office or over the phone on 0161 786 1570 until Saturday 10th March, 4:30pm.
Remember, Salford Red Devils retain 25% of any purchase from the AJ Bell Stadium and ticket prices will rise by £2 on game day at the Mend-A-Hose Jungle.
The full ticket prices are as follows:
Adult: £22
Concession (60+, Students, Under 16s): £14
Junior Swaps: Available from the AJ Bell Stadium Club Ticket Office.
There are also places available on the Supporters’ Coach for Sunday’s game to Castleford and is priced at £15 for all classes.
The pick-up points and times are as follows:
Chandos Social Club (12:25pm)
Royal Sovereign (12:40pm)
Eccles Town Hall (12:50pm)
Dog and Partridge (1:00pm)
AJ Bell Stadium (1:20pm)
Purchase early with Salford receiving a quarter of your payment and support the Red Devils on the road in 2018! 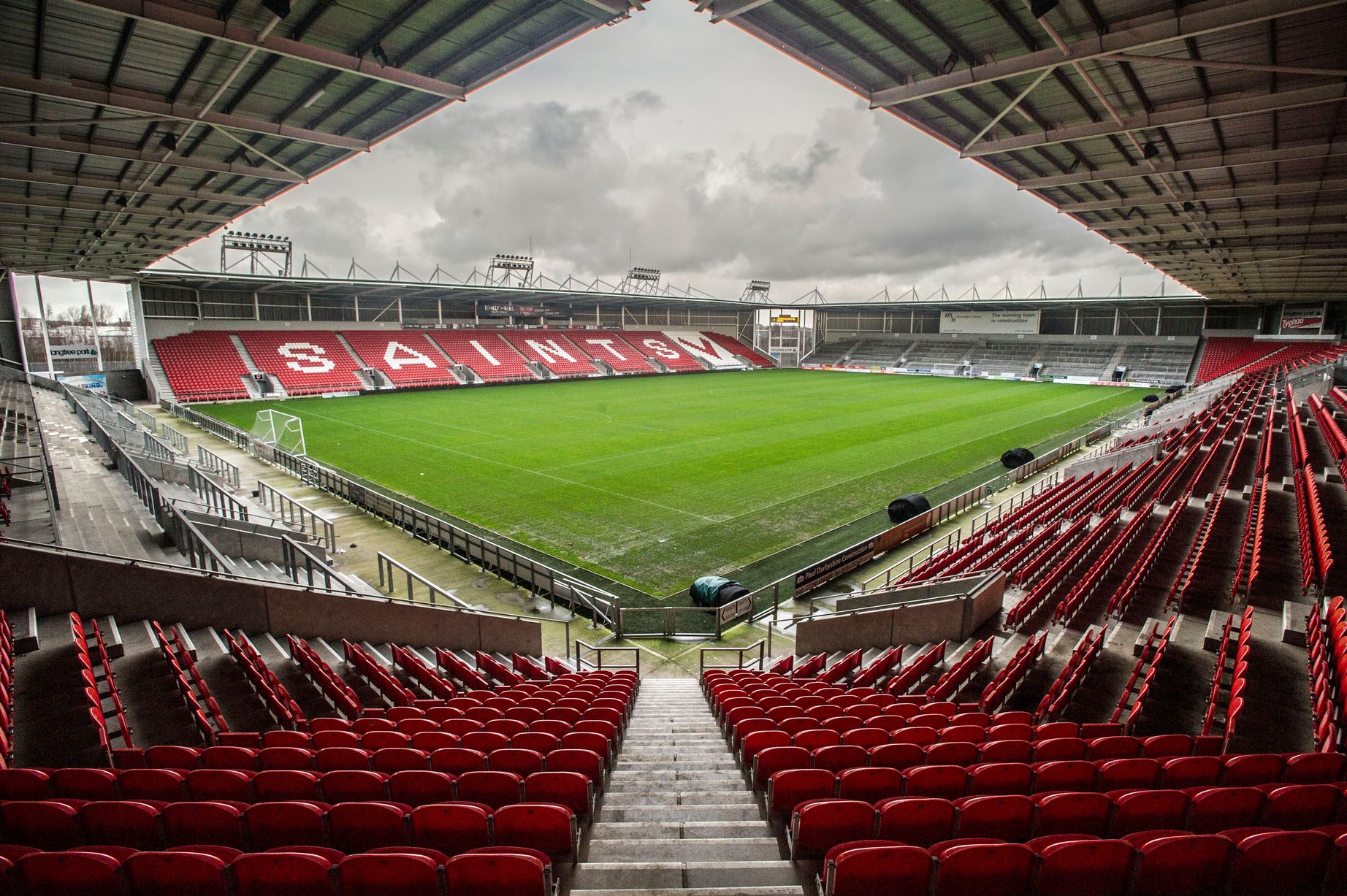 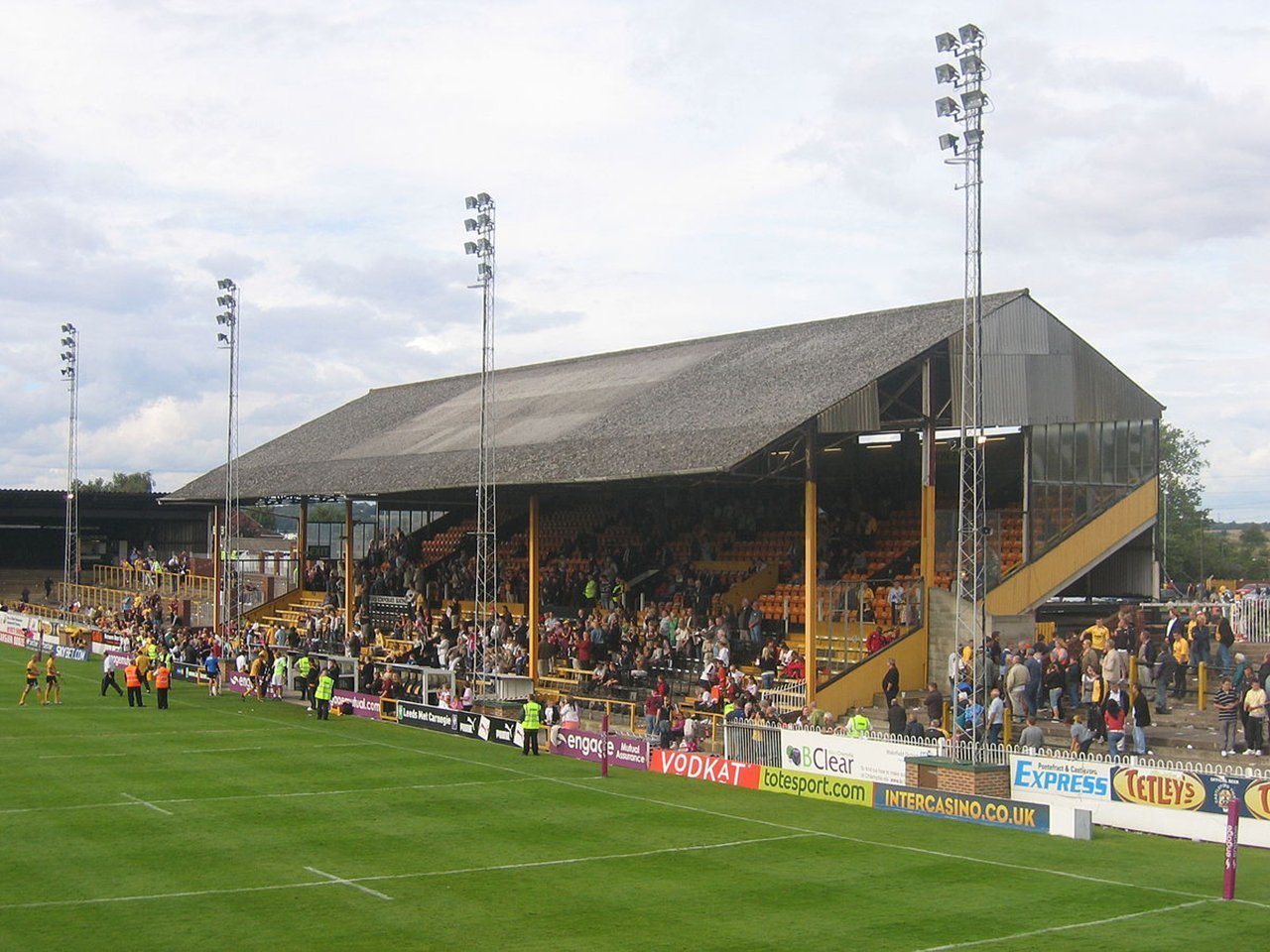 You can now purchase tickets for our third away game of the 2018 Betfred Super League season against Castleford at the Mend-A-Hose Jungle on Sunday 11th March.
Kick-off is set to be at 3:30pm on Sunday 11th March. All allocated tickets for Salford Red Devils supporters are standing. However, any fans needing disabled parking or seated tickets must contact Castleford directly on 01977 552674.
Salford Red Devils fans wishing to purchase tickets from the game can do so from the Club Ticket Office or by calling 0161 786 1570. Ticket prices are set to rise by £2 for any Salford supporters who don’t purchase from the AJ Bell Stadium and decide to pay on the day at the Mend-A-Hose Jungle.
The Red Devils will also receive 25% of any tickets purchased directly from us prior to the game. Junior Swaps are available from the AJ Bell Stadium Club Ticket Office.
A full list of ticket prices can be seen below:
Adult: £22
Concession (60+, Students, Under 16): £14
Junior Swap: Available from the AJ Bell Stadium Ticket Office.
Under 5: Free
Carer: Free

Prices will rise on match day here are those prices:
Adult: £24
Concession (60+, Students, Under 16): £16
Salford Red Devils supporters coach details will be released in due course.
You can purchase your tickets for our game against Castleford from the Club Ticket Office or over the phone on 0161 786 1570. 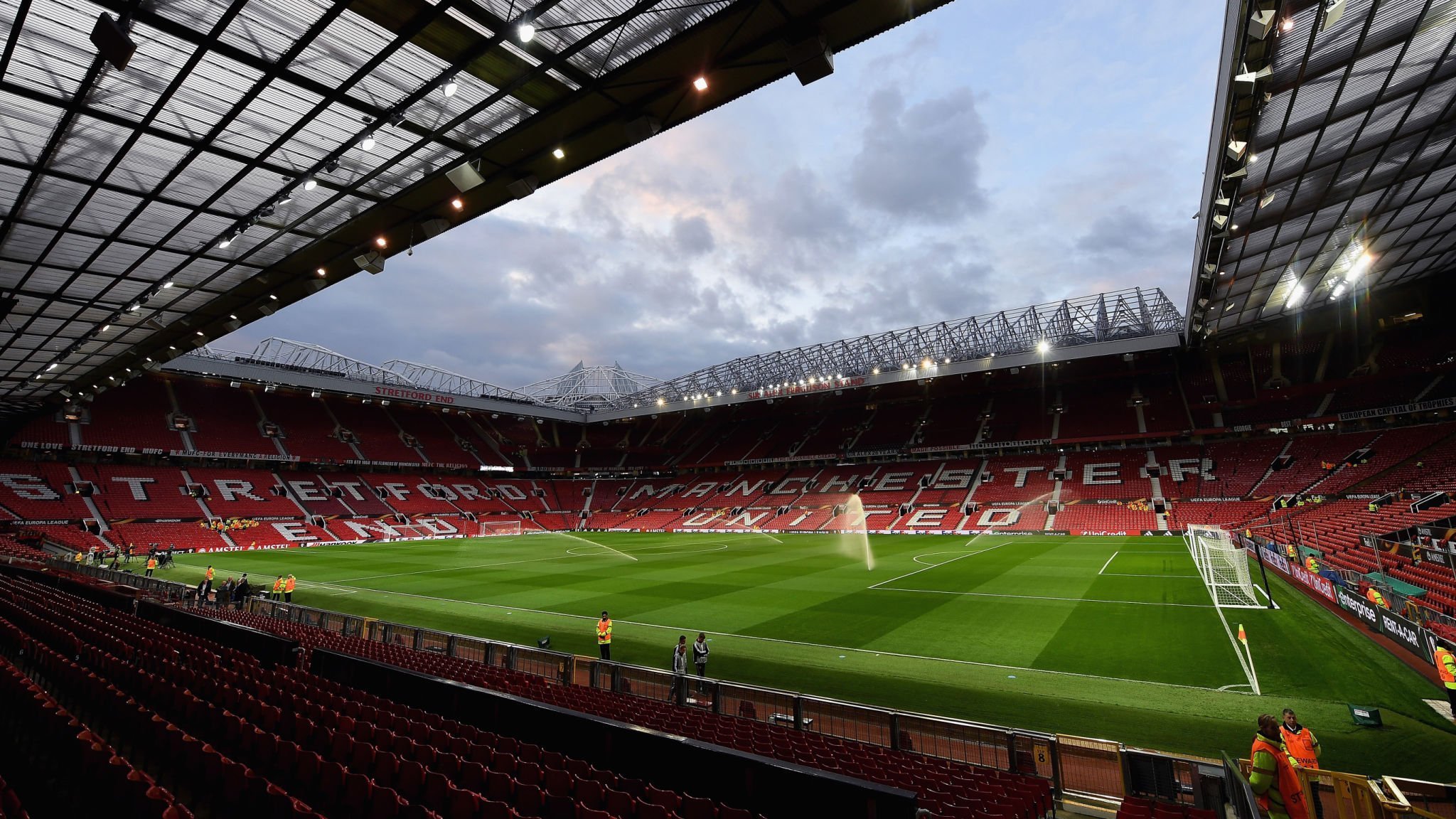 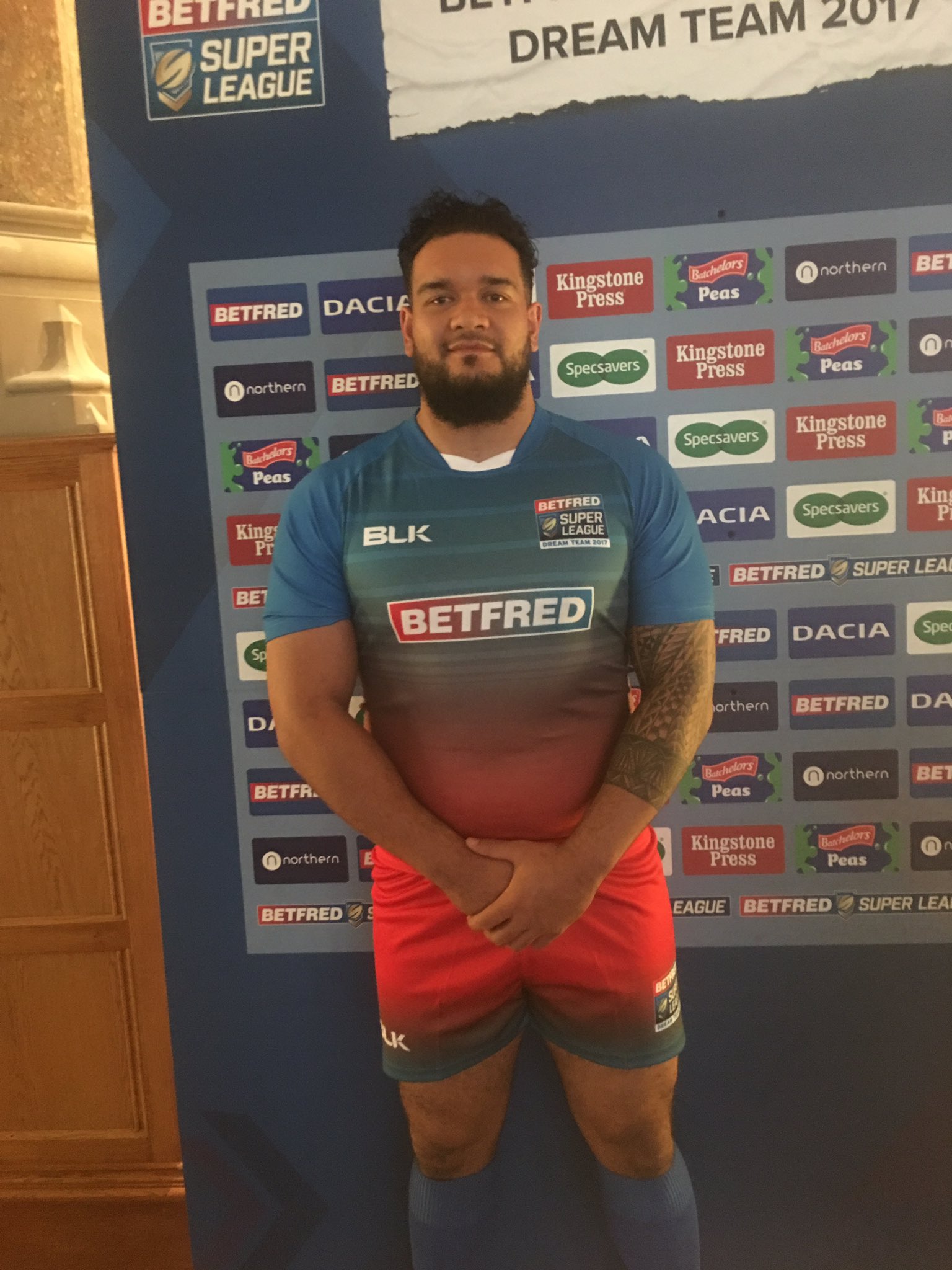 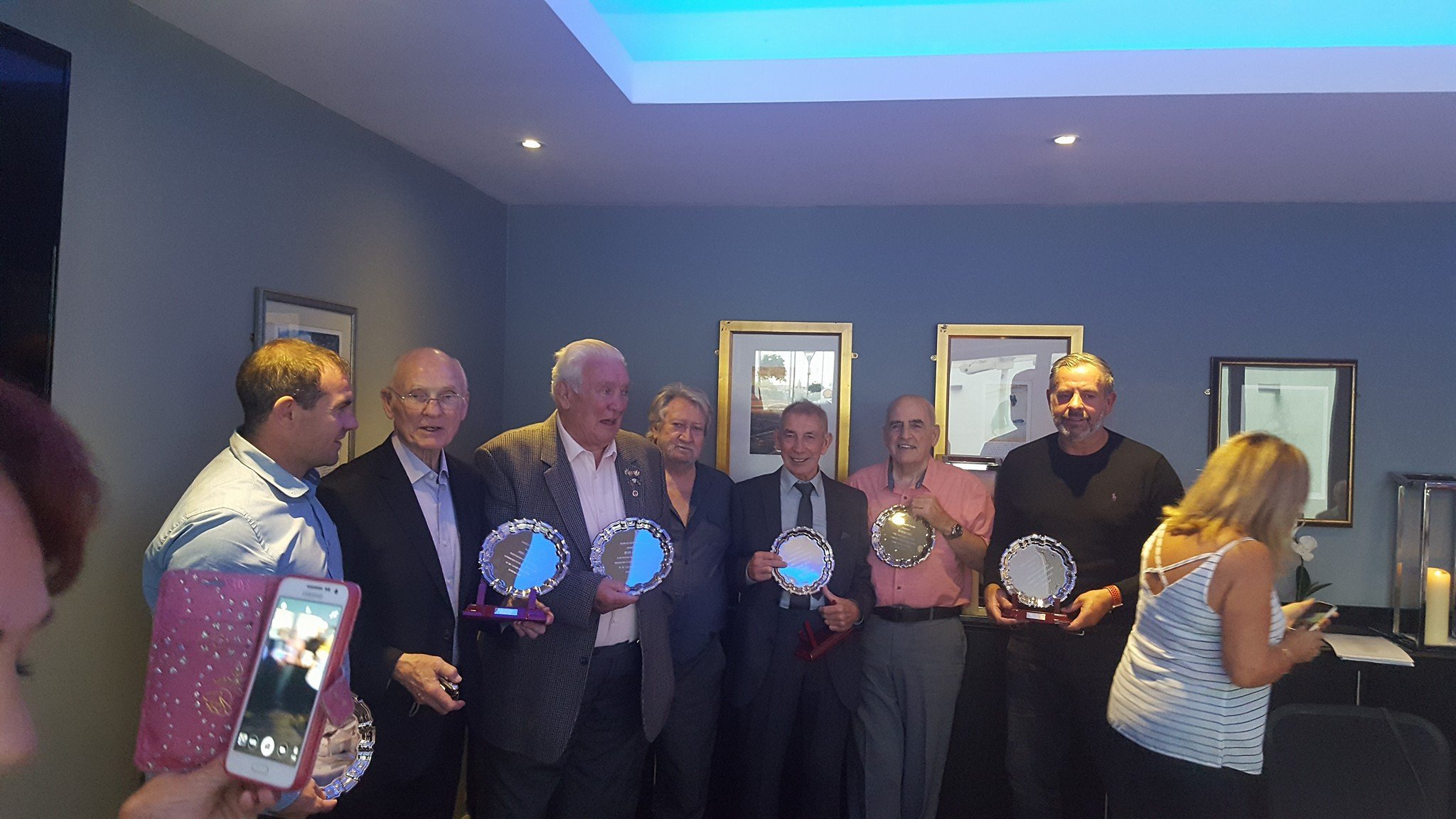 Salford Red Devils legend Jackie Brennan is set to present the ball tomorrow night before our final game of the 2017 season.
Brennan captained the side during Salford’s last visit to Wembley in 1969 as the Red Devils fell to a 11-6 defeat to Castleford Tigers in the Challenge Cup final. Brennan made 317 appearances for the Salford between 1959 and 1970 scoring 70 tries from half-back. The half-back also features in the Salford’s Team of the Century.
CEO Ian Blease and Head Coach Ian Watson went for a meal with Salford legends Brennan, Graham Jones, Hugh Duffy and John Cheshire last week at Alberts in Worsley which has led to Brennan presenting the match ball before tomorrow’s game against St Helens.
Make sure you give this Salford legend a warm reception on Thursday evening as he brings out the match ball.
The match ball for our game against St Helens will be sponsored by Advanced Steel.

Tickets are on sale for our final home game of the season against St Helens and can be purchased over the phone, at the Club Ticket Office or online here. Fans can also watch our end of season awards for an extra £5 in the 1873 suite post-game. Season Tickets are valid for all Super 8s home games. 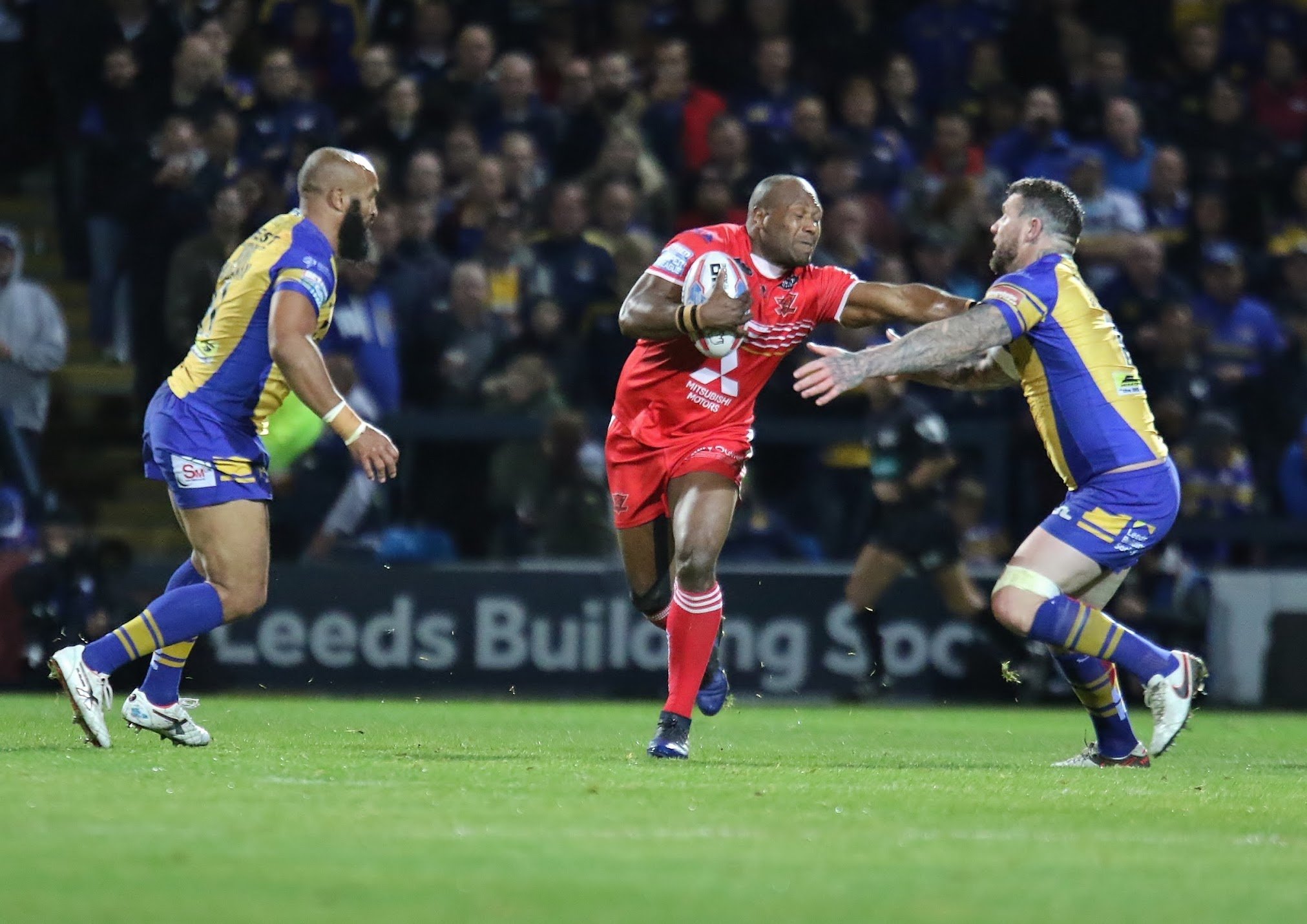 The Salford Red Devils hopes of a top four finish came to an end after a 44-2 defeat against Leeds at Headingley on Friday night.
Gareth O’Brien kicked an early penalty goal to give the Red Devils the lead but the Rhinos led at half-time thanks to tries from Liam Sutcliffe, Danny McGuire and Tom Briscoe. Adam Cuthbertson, Anthony Mullally and a Matt Parcell double extended Leeds’ lead in the second half. The Rhinos were already guaranteed a home semi-final prior to kick-off.
Hull confirmed their place in the Super League semi-finals with a narrow victory over Wakefield in a game which was again a story of inches for Trinity who fell to their second late defeat in as many weeks. Make Fonua, Marc Sneyd and a farewell try from Gareth Ellis had given FC a lead with Joe Arundal and Jacob Miller going over for Trinity.
Sneyd’s drop-goal extended Hull’s lead to seven points but a try from Mason Caton-Brown pulled Trinity back within touching distance. Liam Finn had an opportunity to snatch a draw for Trinity however he skewed his drop-goal attempt wide of the posts.
Wigan’s top four hopes took a knock as they fell to a 38-20 defeat against league leaders Castleford at the DW Stadium. Debuting youngster Jake Trueman scored a 17-minute hat-trick for the visitors while Greg Eden, Michael Shenton and a Greg Minikin double sealed victory for Daryl Powell’s side. Tom Davies, Sam Tomkins and Thomas Leuluai scored for the Warriors.
St Helens earned a comfortable victory over Huddersfield in their search for a top four spot as Jonny Lomax crossed twice in a 40-16 win at the Totally Wicked Stadium. Regan Grace, Mark Percival, Ben Barba, Ryan Morgan and Louie McCarthy-Scarsbrook all went over in a dominant win. Oliver Roberts and Ryan Hinchcliffe both scored their second in as many games for Huddersfield however it was another defeat for Rick Stone’s side.
Super 8s – Round Seven Fixtures