Salford Red Devils fans would like to remind supporters they have until Sunday 2nd December at midnight in which to pre-order our 2019 away shirt and guarantee delivery before our opening game of the season.
The Red Devils will travel to the John Smiths Stadium to face Huddersfield Giants on Friday 1st February and will don our brand new black away kit for the very first time.
Salford Red Devils supporters can wear the shirt while watching the team face the Giants if they pre-order theirs before midnight on Sunday (2nd December). The adult replica shirts are priced at £45 while a junior shirt is priced at £4o.
Pre-order now via our online shop, powered by WildThang, by simply clicking HERE. Make sure you’re wearing your colours for our first game of the 2019 season as we are #TogetherStronger!
For more information on our 2019 away kit, click here. 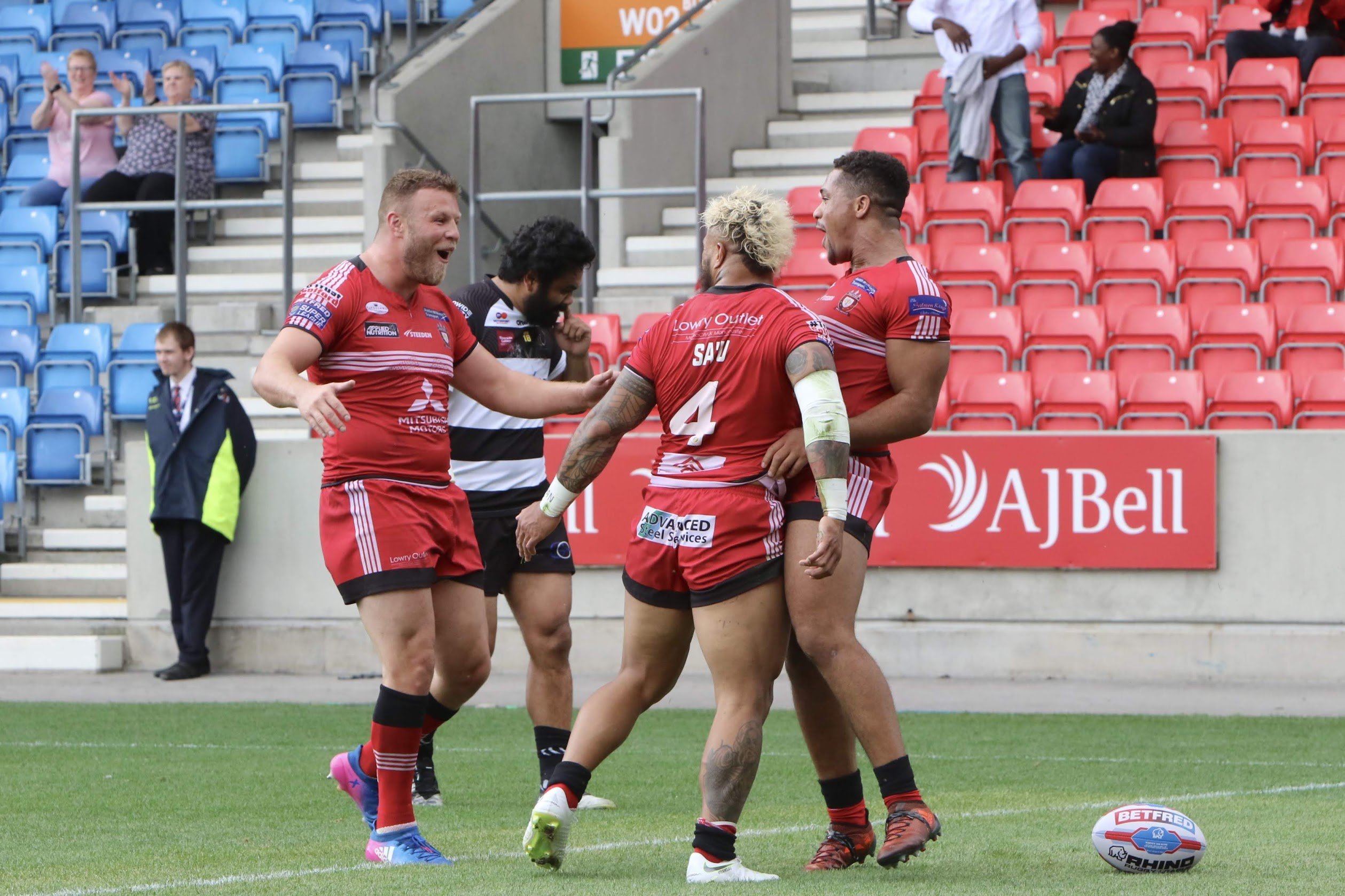 Salford Red Devils can confirm that our online ticket offer which sees supporters save £2 per ticket will continue for our upcoming home game against Toronto Wolfpack on Saturday 8th September.
By purchasing online, you can now save money and print your ticket at home in advance of the game meaning this is now the quickest, simplest and cheapest way to secure your place at the AJ Bell Stadium.
The Red Devils will be looking to make it three consecutive home victories when they welcome the Wolfpack. The game is set to kick-off at 3:15pm on Saturday 8th September at the AJ Bell Stadium.
To save money on your Salford Red Devils tickets, just CLICK HERE.
Online prices – including booking fee – are:
VIP Adult: £33.
VIP Concession: £23.
VIP Junior: £13.
West Stand Adult: £23.
West Stand Concession: £18.
West Stand Junior: £8.
South Stand Adult: £18.
South Stand Concession: £13.
South Stand Junior: £8.
Remember there is a £1 transaction fee with all online ticket sales, but you will still save £2 with every ticket you purchase online!
You can also purchase tickets for our massive Qualifiers clash with Toronto Wolfpack from the Club Ticket Office and over the phone on 0161 786 1570 but remember you won’t save money unless you buy here.

Welcome the Wolfpack!Tickets for our next home game against Toronto Wolfpack on Saturday 8th September are available to purchase at the Club Ticket Office, over the phone on 0161 786 1570 or SAVE MONEY by buying online, just CLICK HERE.

Tickets for our upcoming away game against Warrington Wolves on Friday 29th June, 7:45pm kick-off, are now available at the Club Ticket Office and over the phone.
The Red Devils head to the Halliwell Jones Stadium looking to replicate the performance of last season when Ian Watson’s men overcame the Wolves on the road for the first time since 2011.
Purchase your tickets now and support the lads as they look to earn a crucial two points in the hunt for a place in the Super 8s.
All ticket prices will rise by £2 on gameday at the Halliwell Jones Stadium and Junior Swaps will not be available at the Halliwell Jones Stadium. Tickets will go off sale at the AJ Bell Stadium Ticket Office at 3pm on Friday 29th June. Remember, if you purchase early from the AJ Bell Stadium, Salford Red Devils retain 25% of the purchase fee.
Salford Red Devils will be mainly situated in the West Stand. There is also a very small allocation of seated tickets available for the game. Prices for the seated area are more expensive but if you’d like to purchase them please contact the AJ Bell Stadium on 0161 786 1570 or visit the Club Ticket Office.
Ticket prices are as follows:
Adults: £21
Concessions (65+): £15
Young Adult (17-23): £15
Juniors (5-16): £10
Under 5: FREE
Carers: FREE
Junior Swaps: Available at the AJ Bell Stadium Club Ticket Office
Warrington Wolves are also running ‘Forces for a Fiver’ at the game on production of a military ID card which is for all past and serving members of the armed forces. The Wolves have also extended this offer to all police, fire and NHS staff. Please remember you’ll need to purchase at the Halliwell Jones Stadium to take advantage of this offer.
Due to the proximity of the Halliwell Jones Stadium and the ease of access to the Stadium via Public Transport from the AJ Bell Stadium and surrounding areas the Club will not be running a Supporters’ Coach for this game. Sorry for any inconvenience. 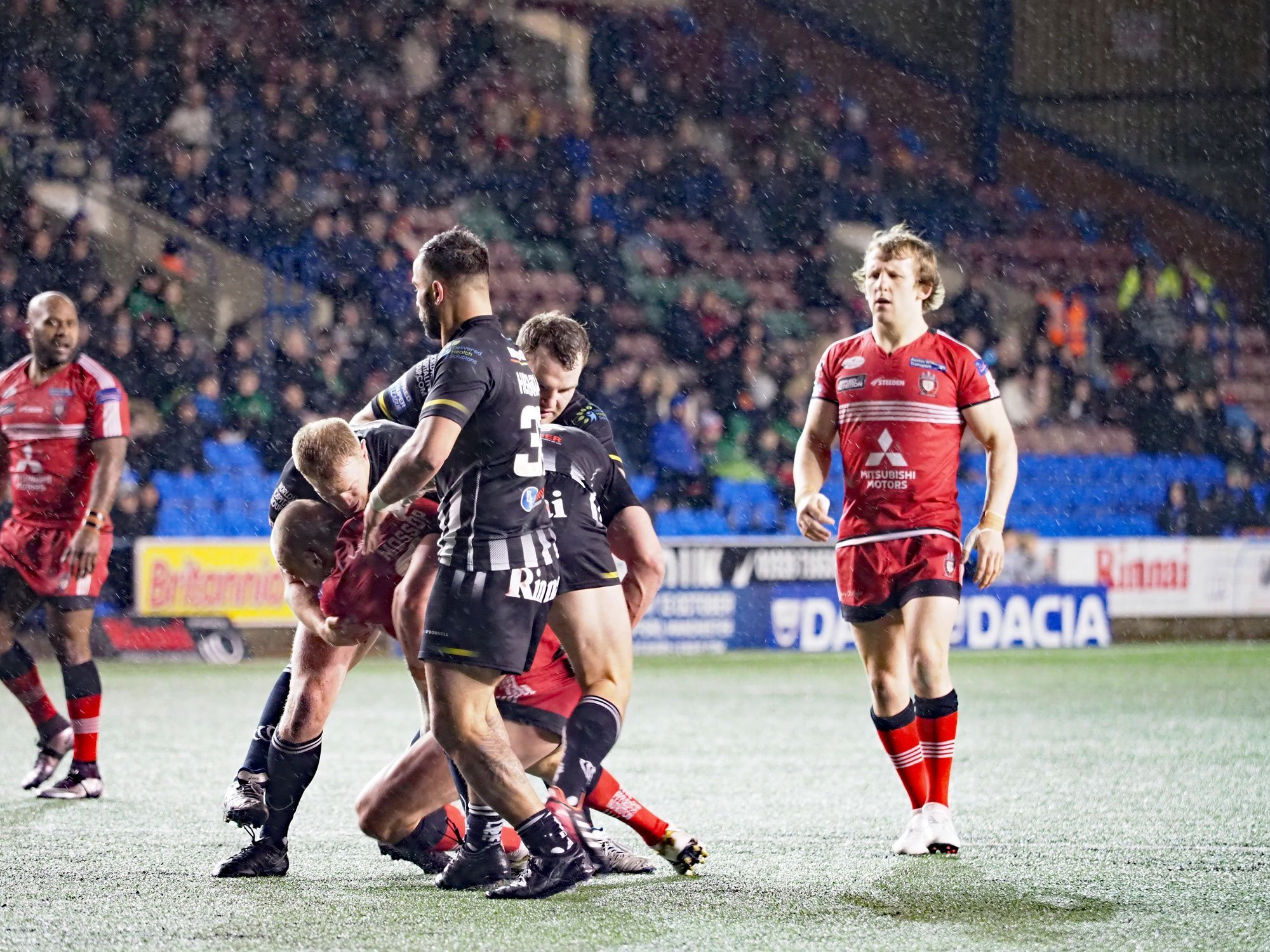 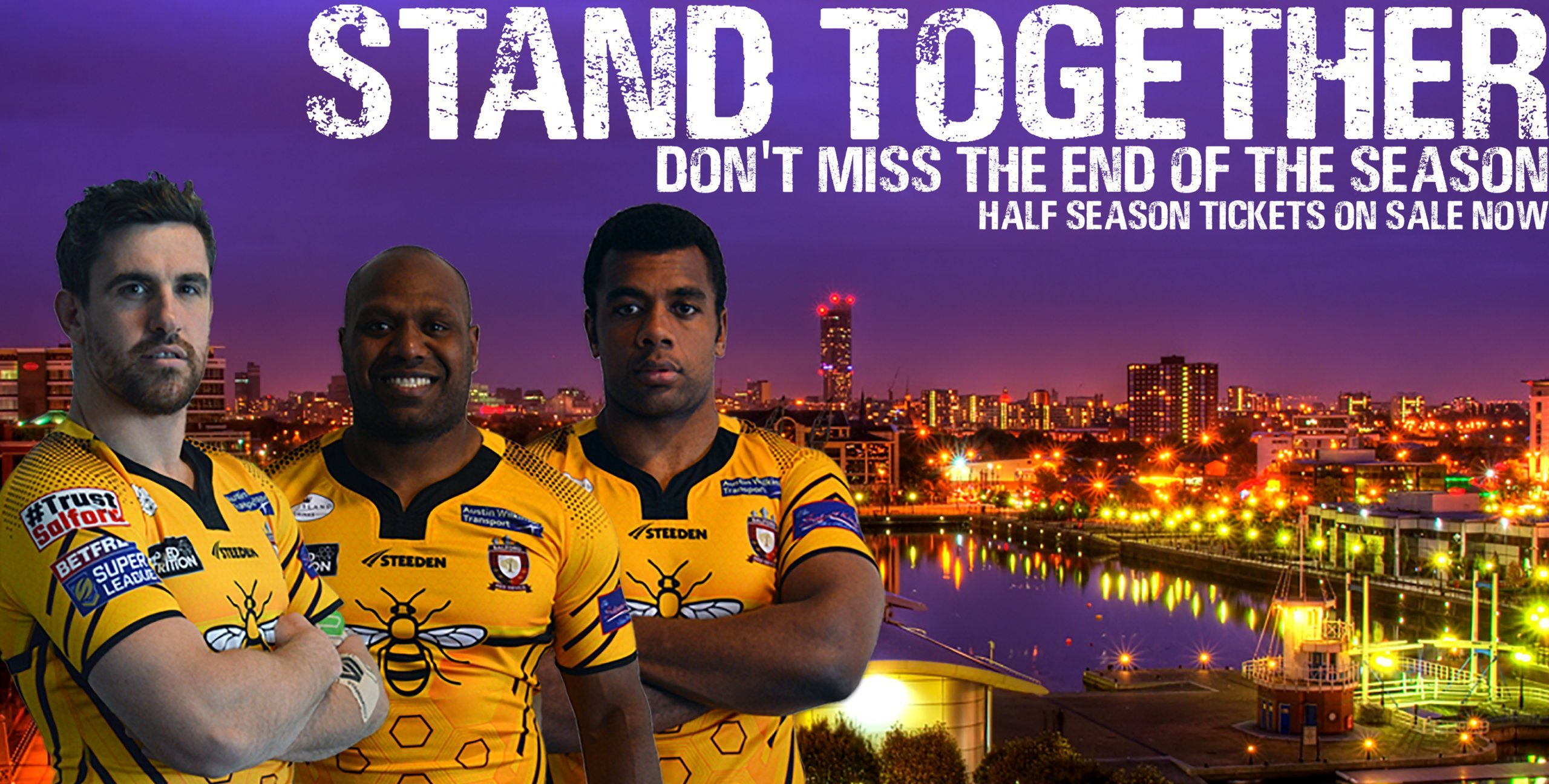 We can confirm that half season tickets will still be available on a pro-rata basis ahead of our next home game against Widnes Vikings on Thursday 14th June.
You can purchase your half season ticket from the Club Ticket Office, over the phone on 0161 786 1570 or online here.
Your half season tickets will include each of our three remaining Betfred Super League games against Widnes, Castleford and Leeds and our 8s campaign which could lead to an extra game free of charge!
Support the lads as they look to push for a spot in the Super 8s for the second consecutive season!
The pro-rata prices are as follows:
West Stand
Adult: £124
Concession: £94
Junior: £30 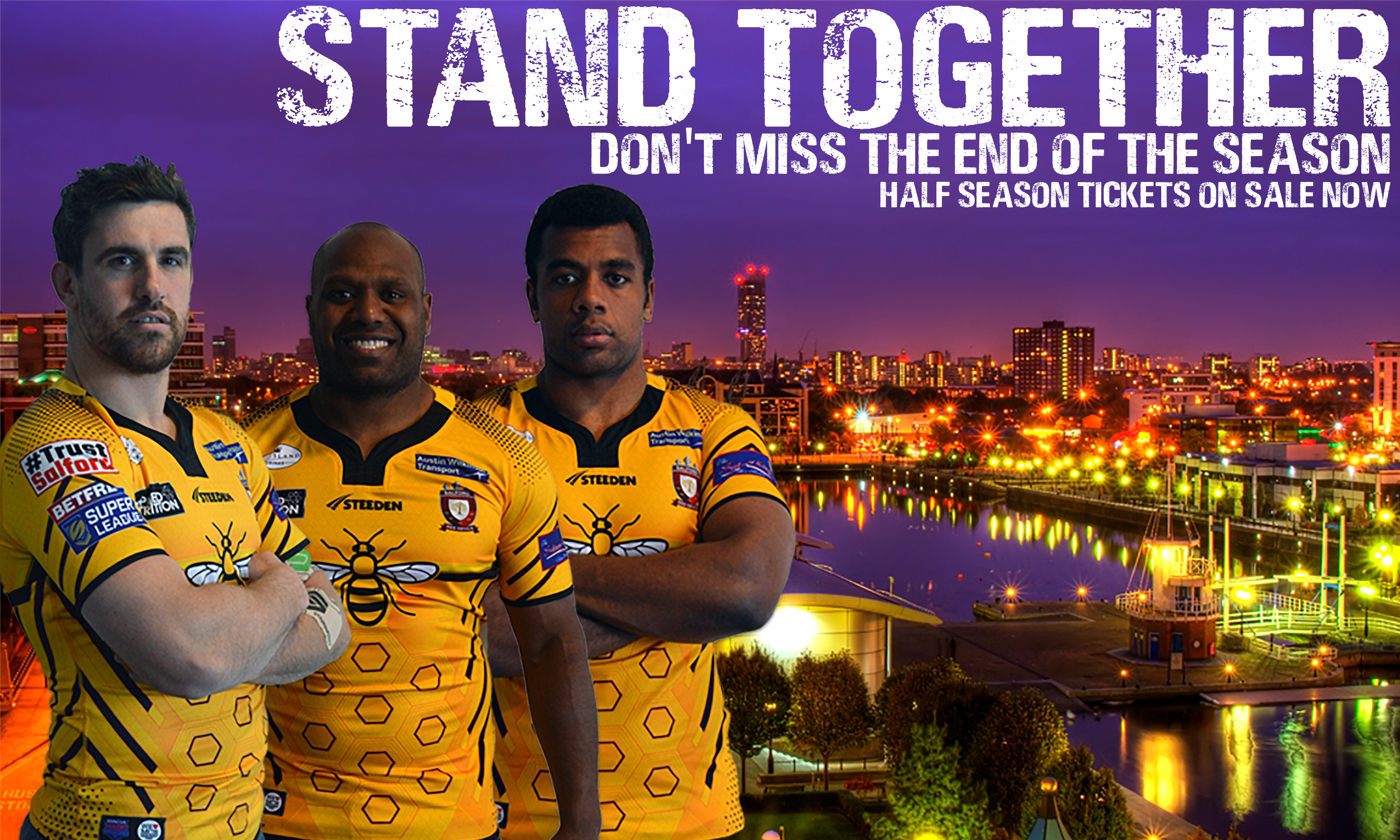 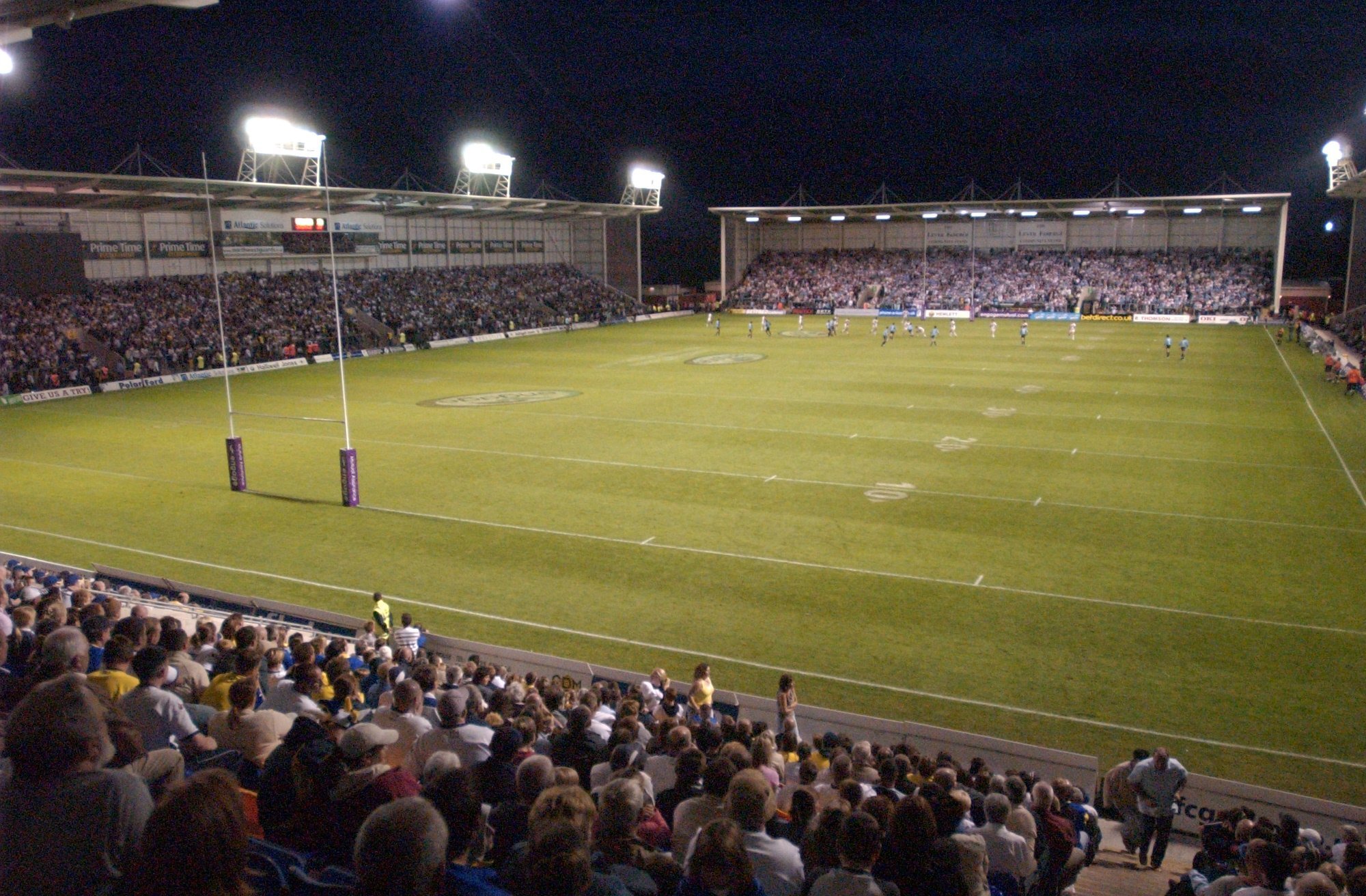 A wide range of Dacia Magic Weekend tickets will be getting sent back later today with the Club only keeping hold of Category Three tickets in the Gallowgate End.
Tickets are available in the East Stand and Milburn Stand however fans will need to purchase before 4pm today.
However, Salford Red Devils supporters can purchase tickets in the Gallowgate End up until Sunday’s game. Remember, Season Ticket holders can get their tickets at half-price with the Club retaining 100% of all purchases at the Club Ticket Office or over the phone on 0161 786 1570.
Here is a ticket breakdown for all the areas of St James’ Park:

Salford Red Devils can confirm the kick-off times for our Betfred Super League games against Huddersfield Giants, Castleford Tigers and Leeds Rhinos will all now be 8pm.
Our home game against Huddersfield is scheduled for Friday 25th May with tickets being available from the Club Ticket Office, over the phone and online.
We are set to face Castleford on Friday 13th July at the AJ Bell Stadium while we take on Leeds on Friday 27th July.
For a list of all our fixtures and kick-off times click here.
To synchronise all Salford Red Devils fixtures into your calendar, click here. 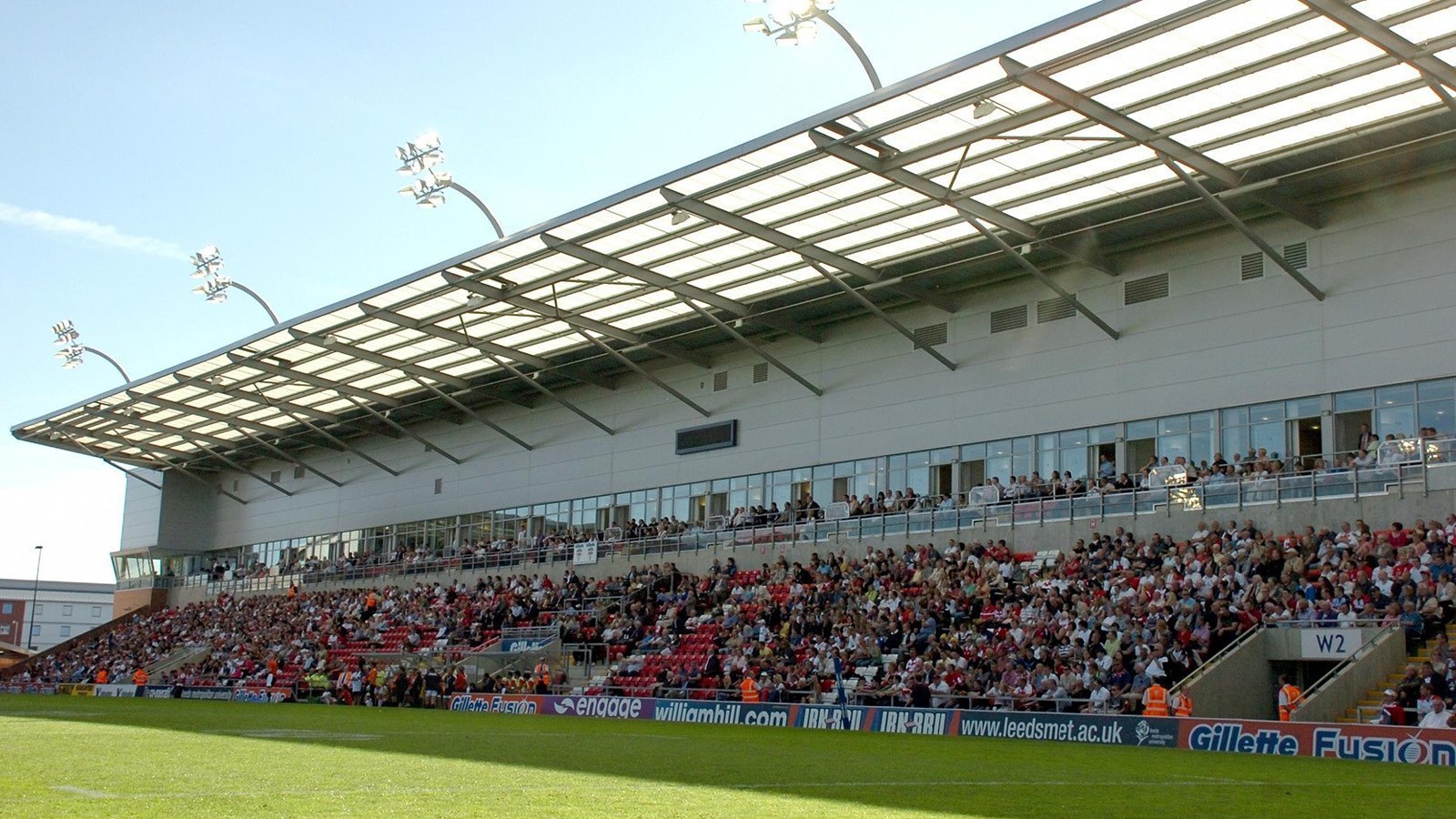 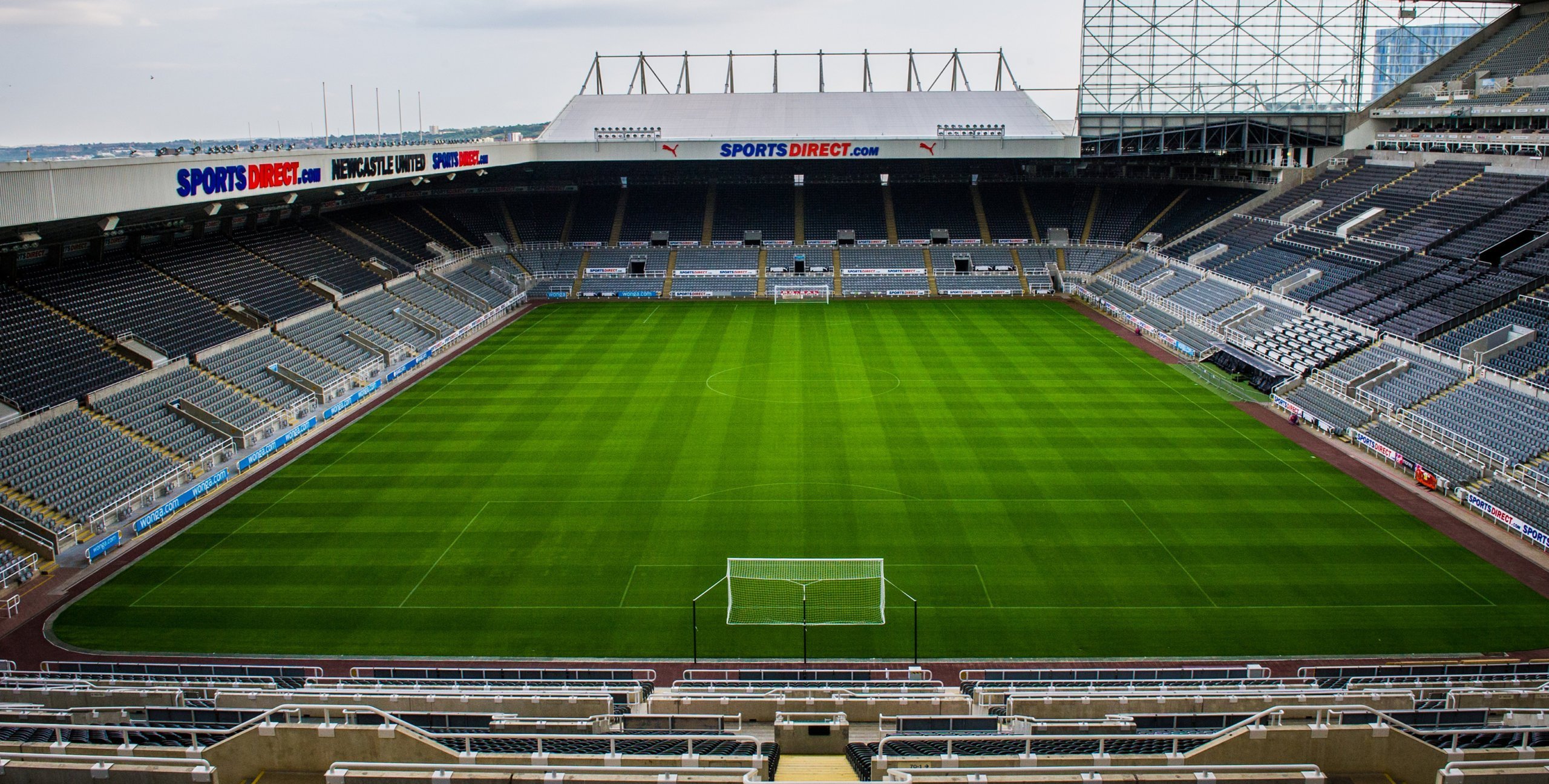