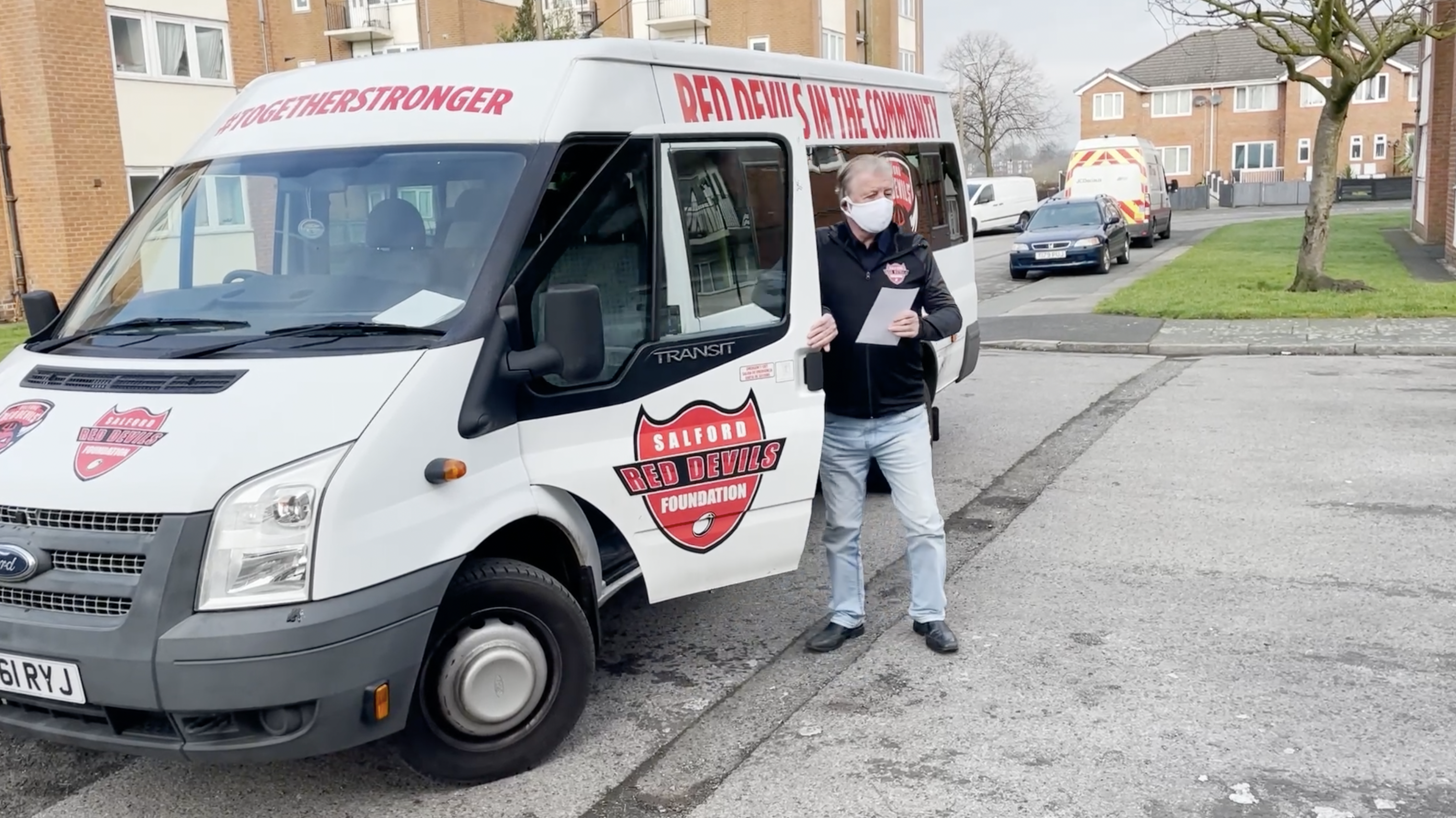 Salford Red Devils Foundation (SRDF) has continued to lift spirits in the surrounding Salford community despite the COVID-19 pandemic putting a halt on the majority of the Foundation’s in-person activities.

As the official charity partner of the Club, Salford Red Devils Foundation has been delivering innovative and wide-ranging programmes that enhance the opportunities of all for the past 15 years and will continue to serve the community now, as it has done throughout the whole pandemic.

Although much of the Foundation’s physical activity programmes have unfortunately had to be temporarily postponed, it has continued to engage participants through adapted online activities. Using interactive activities, SRDF has been able to carry on providing services for the community, and schools, through Zoom and Microsoft Teams sessions. Dance, Karate and multi-sport  virtual sessions are ongoing and the physical delivery sessions that remain are specifically for vulnerable young people living with Special educational needs and disabilities – in partnership with Foundation 92.

During the pandemic, to remain active, the SRDF team have been volunteering for ‘Spirit of Salford’, ensuring that food and medical supplies are delivered to those who are in need and have offered our minibus for use in moving PPE and supplies around the city. SRDF are also working with Salford Assist and are currently doing deliveries to residents in crisis four times per week.

Salford Assist and VCSE commissioning manager Sandra Derbyshire said: “I was contacted by Neil Blackburn from SRDF a number of months ago as the Foundation were really keen to do something to help Salford residents throughout the COVID-19 pandemic.

“Salford Assist is one of Salford City Council’s Discretionary Schemes, supporting Salford residents in times of hardship, crisis or emergency. Due to the COVID-19 restrictions, many council buildings have been closed and vulnerable Salford residents may have struggled for collection points for shopping vouchers for food and essentials.

“SRDF stepped up to the mark and offered to collect deliveries four days a week and drive around the city delivering awards direct to clients homes.

“SRDF have been absolutely amazing and without their help and support, some of Salford’s most vulnerable residents may have struggled to access the urgent support that they require. Thank you so much all at SRDF for your fantastic support.”

As the pandemic continues, it is having a catastrophic effect upon the most vulnerable in society. SRDF has also linked up with Soup and Smiles and the Myriad Foundation, donating thermal gloves, blankets and hats for the homeless community in Greater Manchester. The whole team volunteered to assist serving food and hot drinks in Piccadilly Gardens before Christmas and this is to be repeated regularly to ensure that the Foundation continues to provide essential services to the community.

Salford Red Devils Foundation director Neil Blackburn added: “We all feel the pain of a new lockdown, but it is so important that we all follow the guidance and come together to fight this virus as one whole community.

“Together, we will get through these tough times and as an organisation we will do all we can to support our community. We are pleased to be able to offer schools and the community free access to online sports sessions as well as continuing to deliver face-to-face activities for the most vulnerable in society.”

At these times of uncertainty, our great community comes together to help each other through the tough times. Being a community club means that Salford Red Devils strive to ensure nobody in the locality is adversely affected by current restrictions.

The Foundation mobile number – 07532042666 – has remained active during all normal office hours as an outlet for any fans or local residents to call and speak to our team if they are feeling isolated, lonely or simply fancy a chat to boost their mental health during lockdown.

For more information and to register your interest in our programmes, or to get involved with sponsorship and fundraising, please contact neil.blackburn@salfordcc.ac.uk.

U16s Head Coach, Danny Barton, Alongside David Clegg, Gives His Assessment Of His U16s Side’s Final Game Of The Season
At the end of an extremely short, eight week season, Salford Red Devils U16s faced their greatest challenge on their fixture list, with the visit of highflying Castleford to the A J Bell Stadium, last Sunday. Whilst the Yorkshiremen had been locking horns with top Super League sides such as Wigan and Leeds, the young Red Devils had been facing teams from the development areas of the North East, and the Midlands.
The big step up for the young Salford lads was something that the team had been working towards, however, and when the moment came around, they rose to it with a heroism which must have stirred the hearts of their faithful followers, with a 22-18 victory to add to the previous three wins they had already posted. Only the loss, owing to poor weather conditions, of a further three fixtures against the same development sides, has prevented the Devils from winning all seven of their fixtures.
For Head Coach, Danny Barton, Sunday’s performance really was the icing on the cake, and the best way he could have imagined rounding off his first season in charge of the team.
“It was a really pleasing afternoon, all round,” he confesses. “The lads have worked hard throughout, and I was especially pleased for them. To get such a result against an Academy 1 team has put down a marker showing that, although we are an Academy 2 side, we can still match, and beat, sides from the higher group.
“We didn’t need much motivation because not only were we facing a top outfit, many of the lads’ futures with the club were on the line in terms of contract renewal, but I was also pleased for our coaching staff, for all the work that they have put in.”
One aspect of the encounter, which would probably have gone unnoticed by many of us, was the number of local lads included in the Salford team. As far as ‘Embedding The Pathways’ is concerned, the word ‘local’ incorporates not only Salford players but also lads living Trafford, Manchester, and Bury, which is our allocated area.
“On Sunday, no less than eight of the twenty man squad were from within our locality, to compliment the great players we have from other areas,” Danny proudly states.
As is widely recognised, a good start is crucial in providing for victory at the end of the game, and so it proved to be on this occasion.
“We were first to score, and actually went a couple of tries up, relatively early on,” he recounts, “and by half time we were 18-4 ahead, thanks to tries from Jamie Abram, Tyler Dupree, and Lewis Clarke, and three goals from Keegan Brennan. Lewis’s’s try was the real stand-out one, coming from within our own forty. I’d expected a long kick but Jamie Abram put in a chip over the defence, passed it on to Lewis Clarke, who finished it off.
Castleford came back at us in the second half, and it became heart in mouths stuff towards the end. Lewis Clarke’s second try gave us the cushioning we needed and the result the lads deserved”
Incredibly, at the most crucial point of the game, the home side suffered a reduction in numbers, as two players, in separate incidents, were despatched to the sin-bin, one for descent, and the other for a late tackle on one of the Castleford half backs.
“For eight minutes towards the end we were down to eleven men,” Danny ruefully reflects, “yet we prevented the opposition from scoring throughout the whole of this time!
“One of the players sin-binned didn’t even get back on the field, so close to the end did all this happen. I asked the rest to dig deep and prevent Castleford from scoring, and that’s just what they did.”
Considering the overall size of the visitors’ team, and the fact that there were two England players among them, no praise could be high enough for the achievement of holding out in such difficult circumstances.
After such a stirring performance, the downside is that, far from having the opportunity to kick on and make further improvement, the group have played their last game together, and the players will be playing for their amateur clubs for the rest of the season.
“It would have been nice to have had the chance to back this up with another match,” Danny admits, “but that is not to be. All the players will remain with us throughout the season, though, as we shall be training together once a week.”
Salford Team
Liam Leech, Ben Moseley, Lewis Clarke, Jack Ratcliffe, Seb Howarth, Jamie Abram, Keegan Brennan, Tyler Dupree, Kieran Moore, Josh Whitehill, Claudio Defreitas, Keenan Frazer, Tom Craig
Subs
Jonny Kirby, Reece Walker, Will Cartridge, Owen Mackie, Tom Price, Patrick Harrison, Brad Smith