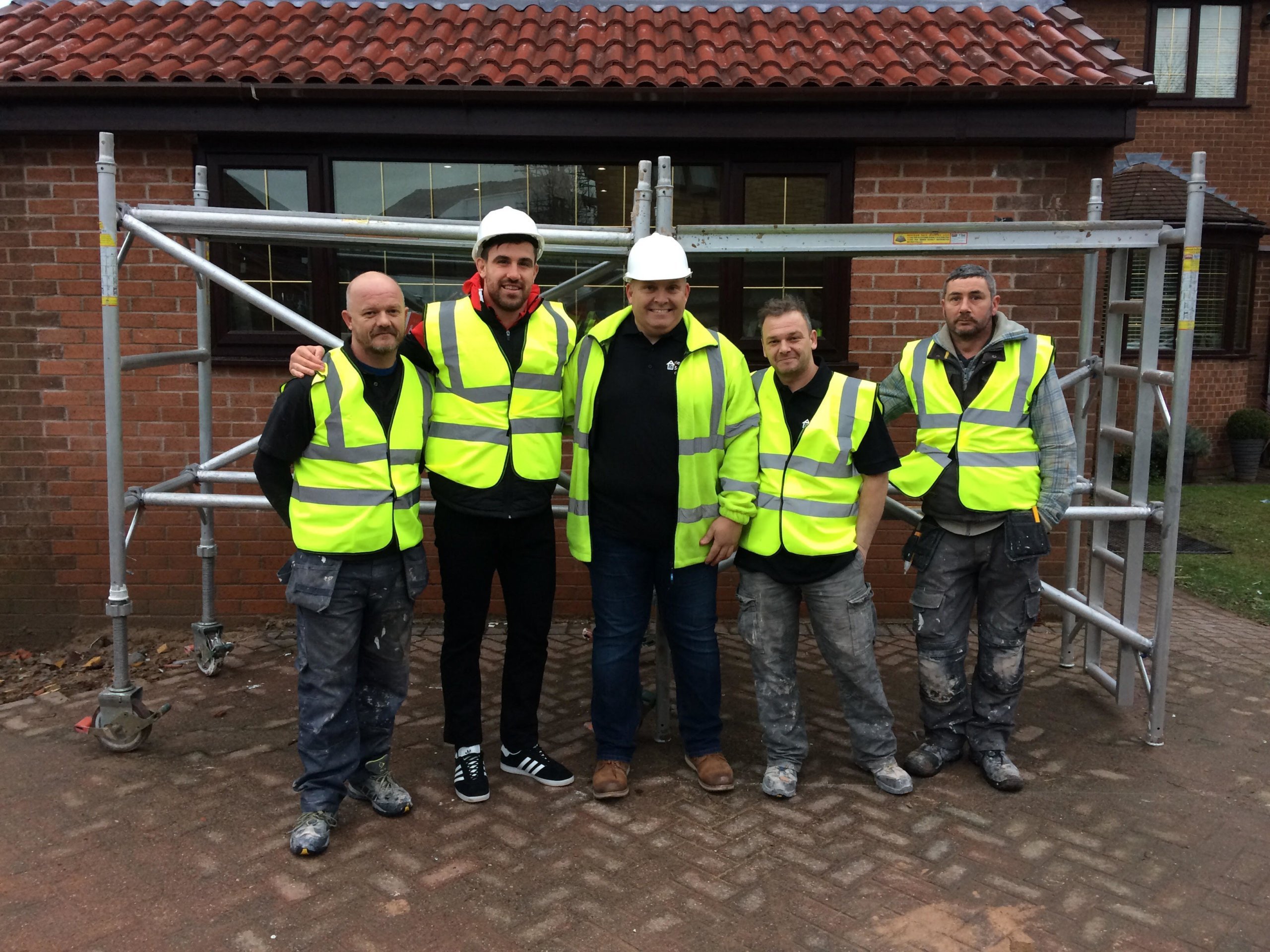 Arlec Property Services will proudly sponsor Salford Red Devils forward Tyrone McCarthy for the 2018 season and the Irish international went down to see Gary Smeaton and his team before the New Year.
Gary Smeaton said: “Tyrone came down to Heywood and he had a good look round inside and outside we had some photographs and a chat – it was good.
“He said he might even be looking at some of the lads getting some work done which would be good for my company as part of being Tyrone’s sponsor since he arrived at Salford.
“He got the high vis on and the hard hat for health and safety but nothing other than that – he was great though,” Smeaton joked.
Tyrone McCarthy said: “Gary and his team were all fantastic and I really enjoyed going to see them on site.
“I’d like to thank Gary and everyone at Arlec Property Services for sponsoring me again for the 2018 season and I hope to return the favour with some good performances on the field.”
Smeaton added: “Yeah I think Tyrone will have another good season. If I’m honest I wouldn’t mind seeing him with the captaincy to be honest I think he’s got a good voice on him.
“But as long as he gets a regular runout like he did last season he’ll certainly prosper.
“We’ve lost a few big players but we’ve also recruited well so I’m optimistic for the upcoming season and I do think we can challenge at the top end of the table.”
Arlec Property Services have over 20 years experience within the building and property industry. They carry out a range of building work from maintenance to major refurbishments on properties and commercial buildings. Arlec Property Services also recently featured on the Channel 4 programme ‘Help! My House is Falling Down’ completing plastering work on a property.
There are still a handful of Salford Red Devil First Team players available for sponsorship. If you’re interested contact Fiona.Woods@SalfordRedDevils.net.
If you’re a fan you can still get in on the action with our brand-new fan sponsorship initiative – Read about Dr Terry Thorne’s fan sponsorship of Logan Tomkins here.
Again, if you’re interested contact Fiona.Woods@SalfordRedDevils.net.

Salford Red Devils launch fantastic new initiative for fans who want to get that personal touch with players via our new fan sponsorship package.
The new package is designed for fans who want to build a connection with Salford first team players but don’t need the notoriety or brand awareness that a business sponsor would want.
The package includes a signed personalised 2018 replica shirt with your players name and number on, you will be invited to the media day and have the opportunity to join the team photo alongside the 2018 squad, their name mentioned alongside their player in the matchday programmes and a discount on hospitality prices for one game of their choosing during 2018 as a fan sponsor privilege.
Dr Terry Thorne, who watched his first game sixty years ago as Salford lost to St Helens at The Willows in 1957, has become our first fan sponsor and has been paired with Red Devils hooker Logan Tomkins who he has already sponsored for two previous seasons.
Terry and Logan struck up a friendship due to their joint love of birds of prey and have both been hawking together on numerous occasions with Terry now a good friend of the family.
Thorne said: “It started when Logan was a youngster we were members of the same hawking Club we both keep birds of prey and I met him when he was at Wigan Warriors.
“We became friends and when he signed for Salford I continued to watch his career develop and I started to sponsor Logan but it’s a lot more than that we’re friends as well. I remember his daughter being born, I know his partner Heather and I know his whole family – it’s been a great experience.”
Salford hooker Tomkins said: “Myself and Terry struck up a connection because of our love of birds of prey and hawking but it’s become a lot more than that.
“Our families are really close and I really consider him a top bloke and a good friend. I offered to look after his birds recently when he was taken into hospital.
“I’d like to thank Terry for the continued support throughout my career and for the sponsorship heading into 2018.”
Regarding the fan sponsorship, Thorne said: “It’s definitely worth the money without a doubt.
“I’ve watched other sponsors over the few years I’ve been doing it now and I’ve seen them develop this relationship with their player and I don’t know what it’s like at other clubs but here you do really find a connection with the player.
“I’d recommend it to everybody for such a reasonable amount of money you are actually involved in watching that player develop and you can be a part of their development and career.”
Salford Red Devils hooker, Logan Tomkins, said: “The initiative is a great one from the Club and I hope it gives more Salford supporters the opportunity to build personal relationships with a player of their choosing.”
Terry is delighted with the direction of the Club at the moment and is delighted to continue to support the team and Logan for the foreseeable future.
Thorne said: “I’m so happy with where the Club is at currently the people behind the scenes are all brilliant and working hard – Ian Blease is doing a terrific job as CEO.
“I remember times in the old days where we couldn’t raise a team and now we’re riding high. I think a lot of the young supporters maybe expect too much sometimes we’re in such a good position in comparison with years gone by.
“Salford Red Devils are definitely going places.”
Any fans interested in fan sponsorship for 2018 should contact Fiona.Woods@SalfordRedDevils.net
There is a limited timeframe in which to register interest in this fantastic new initiative with our Media Day being set for mid-January.