Salford Red Devils will launch our 2018 away shirt tomorrow (Friday 8th December) at 8am and in the lead-up we’ll be looking at some old away and alternative kits.
Today we’ll be taking a look at those times down the years that Salford donned a green away kit and how those seasons panned out.
The green away kit hasn’t been as common as the colours we’ve previously previewed – black, white and blue – but it has featured on a few occasions.
Our 2012 away kit, sponsored by MediaCity, was a light green and it brought some solid performances on the road from Salford who won three of their eight Super League victories away from home while running some teams very close.
The other memorable green away strip Salford have worn came back in the 1992-93 season which was a darker green featuring a white pattern on the front, back and sleeves sponsored by ESAB.
But, unfortunately it was a difficult season for the Red Devils who ended the season 13th in the top flight finishing above only Hull Kingston Rovers by four points.
While the green kit hasn’t been as frequent as other colours throughout Salford’s history it could still make an appearance as the predominant colour in 2018, do you think it will?
For a brief history on Salford in white click here.
For a brief history on Salford in black click here.
For a brief history on Salford in blue click here.

Ahead of the launch of our 2018 away kit we’re looking through some memorable away kits of yesteryear and today we’re focusing on Salford in blue.
The 2001 Willows Centenary away shirt was a dark blue and the Club secured Super League status for another season in 2001. Salford racked up four away victories in 2001 with victories over Warrington, Castleford, Huddersfield and London which, in the end, were pivotal as the Red Devils avoided the drop by three points.
Salford’s previous away kit in 2000 was also dark blue and again warranted a solid Super League finish for the Red Devils. Salford finished 9th winning 10 of their 28 Super League games with three coming away from home – A double over London before a victory at The Shay against Halifax.
A light blue away shirt was the theme for the 1998 season but unfortunately it didn’t bring much success away from The Willows with Salford finishing 11th however they were nine points above basement Club Huddersfield whom they beat away from home in August 1998.
Salford donned an electric blue kit throughout the 1989-1990 season which also featured black, white and red V’s across the chest. However, it brought minimal success on the sides travels that season with Salford winning three away games at Barrow, Featherstone and Hull in the first round of the Regal Trophy.
Could we see Salford wearing a predominantly blue away kit in 2018?
For a brief history on Salford in white click here.
For a brief history on Salford in black click here.

Ahead of the launch of our 2018 away kit we’re looking through some memorable away kits of yesteryear and today we’re focusing on Salford in black.
Last season the Red Devils donned a predominantly black away kit and it was worn with pride in the Club’s first Challenge Cup semi-final for twenty years. Despite losing to Wigan at the Halliwell Jones Stadium Ian Watson’s men wore the black strip in victory over the Warriors in Super League; their first win at Wigan since 1997.
The 2010 away jersey was black with a hint of pink and was a big hit amongst Salford fans. Sponsored by the Trafford Centre the kit saw Salford finish 12th above both Harlequins and Catalans Dragons.
Black was also worn on Salford’s travels back in 2008 as the Club won the Championship title and their Grand Final showdown with the Celtic Crusaders. Subsequently both sides were awarded Super League status via the newly implemented licensing system.
The mid-1990’s saw Salford in black and yellow on the road. Despite winning one third of their games that season the Red Devils suffered relegation in black and yellow as six teams suffered the drop in preparation for the formation of Super League.
Black and yellow was also the theme the season prior and again the Red Devils had a very similar record in the league sealing top flight Rugby League for another season. Both black and yellow kits were sponsored by Cebora.
Could we see Salford wearing a black away kit in 2018?
For a brief history of Salford in white click here. 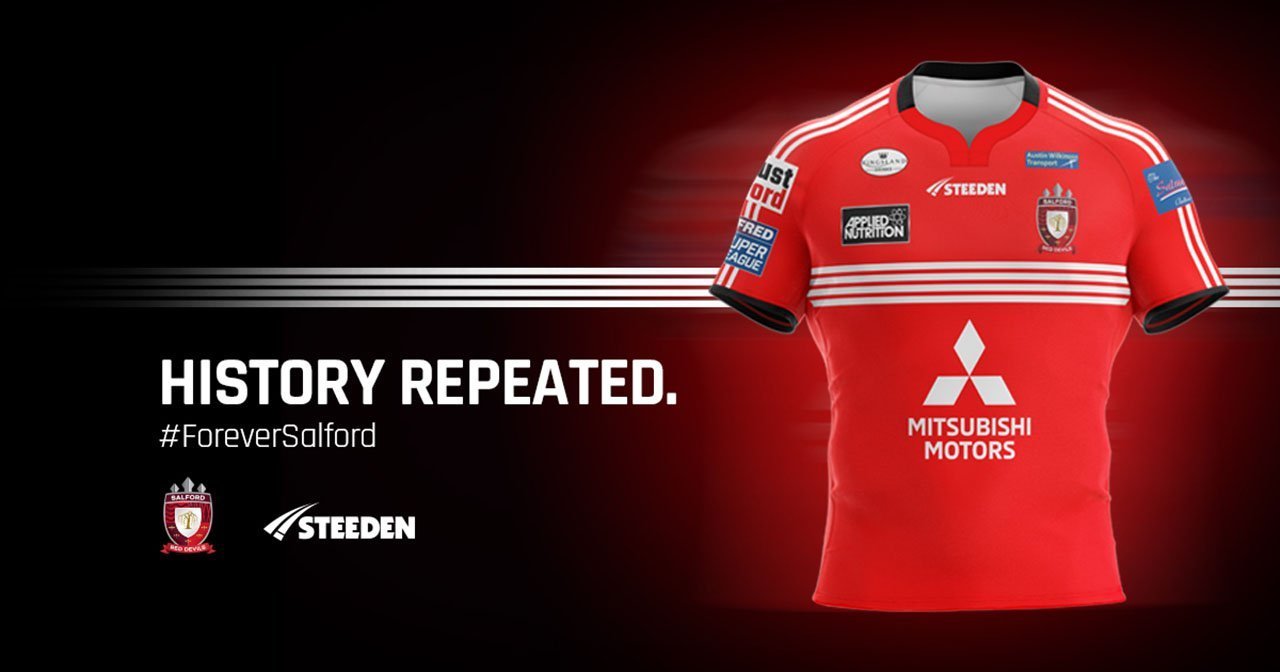 Have you purchased your Steeden #FourStripes 2018 home kit shirt ahead of Christmas?
Our fantastic brand-new 2018 home shirt is still available for pre-order via our online Steeden store with deliveries set for the week commencing 17th December.
The 2018 home shirt is a reboot of one of Salford’s most memorable home kits worn between 1986 and 1988 incorporating #FourStripes across the front as well as on the shoulders.
Purchase your Salford Red Devils 2018 #FourStripes home kit for Christmas and wear it with pride throughout 2018.
To purchase your 2018 #FourStripes home shirt click here or to view our training and leisurewear available for pre-order click here.
We will be revealing our 2018 home kit next week. 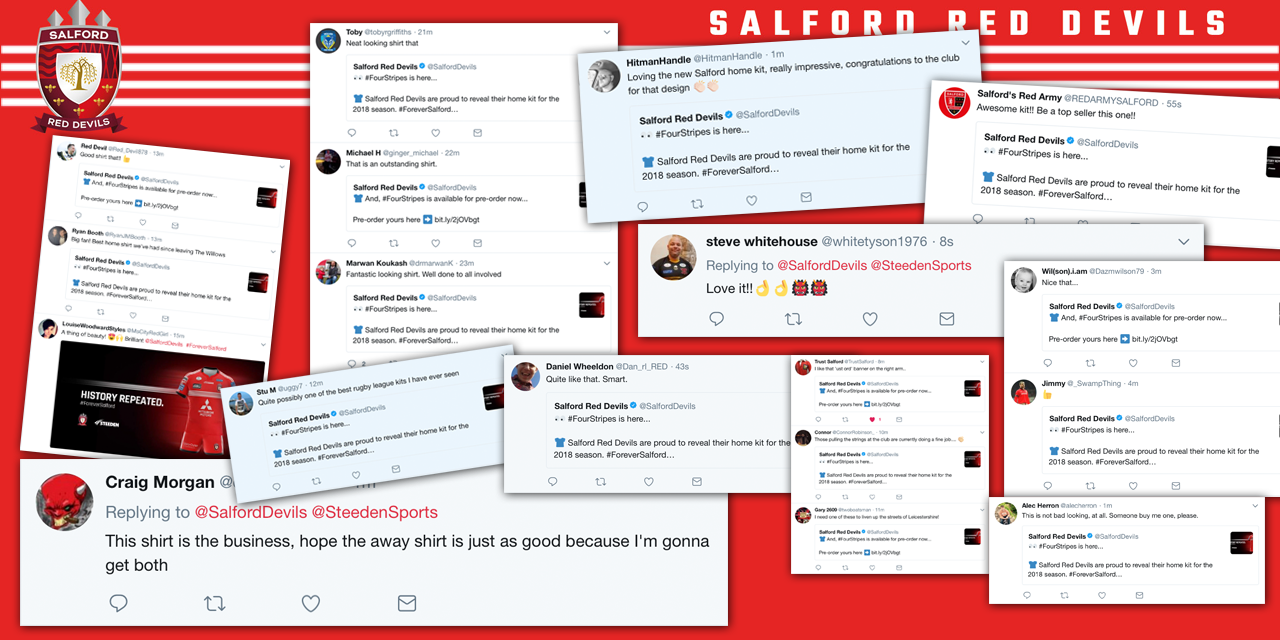 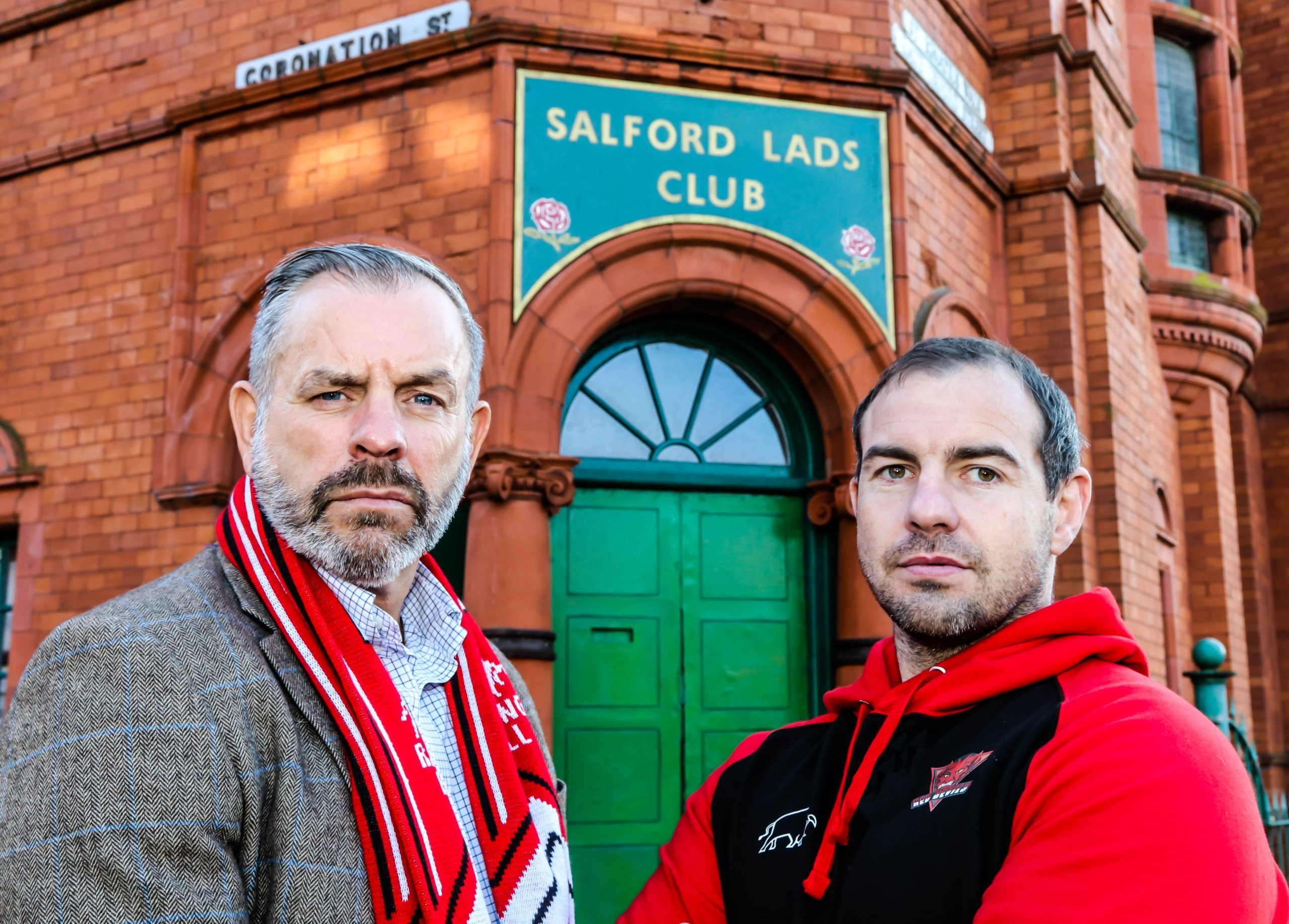 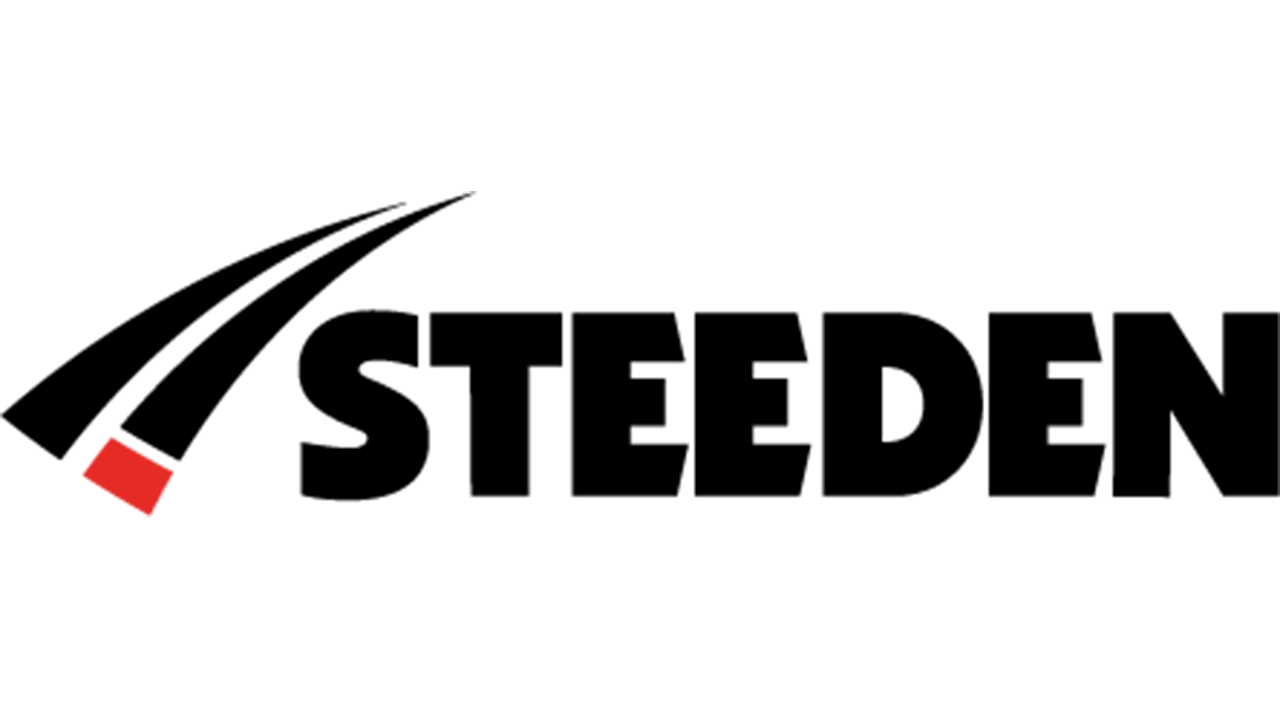 Earlier today the Salford Red Devils launched our 2018 home kit which has received phenomenal feedback but we also have a range of training and leisurewear available.
Our manufacturers Steeden have produced several new items which are now available for pre-order by clicking through to our online Club store here.
If you’d like to wear the same stuff as the Red Devils stars training shorts, players polos, players t-shirts and player singlets are all now available to pre-order.
But, if you’d prefer to go for the ‘Ian Watson look’ there are Salford Coaches T-Shirts and Polos available from as little as £22.99.
Leisurewear is also available with two versions of Coaches hoodies, wet jackets and fusion jackets all up for pre-order. Skinny fit pants and players gilets are also available for pre-order on our online Steeden Club shop.

Salford Red Devils are delighted to reveal our 2018 home playing shirt as designed by our new manufacturers Steeden and their European Licensee Advantage Sport
Our 2018 home shirt is a reboot of one of Salford’s most memorable home shirt designs which the Club played in throughout 1986-1988 featuring #FourStripes across the front.
The new shirt design follows the reveal of our new Salfordian crest as the Club continues to go back to its roots and put the community and City of Salford at the centre of everything it does.
2018 home shirts are now available for pre-order and are expected to be delivered the week commencing the 17th December.
To pre-order your 2018 home shirt click here.

Remember to see Salford in action in 2018 you can purchase your Red Devils Season Ticket. For a full list of Season Ticket prices click here, for a breakdown of each tickets Direct Debit payment scheme click here. Visit the Club Ticket Office, phone 0161 786 1570 or click to buy online here. Online purchases can’t be done via Direct Debit.