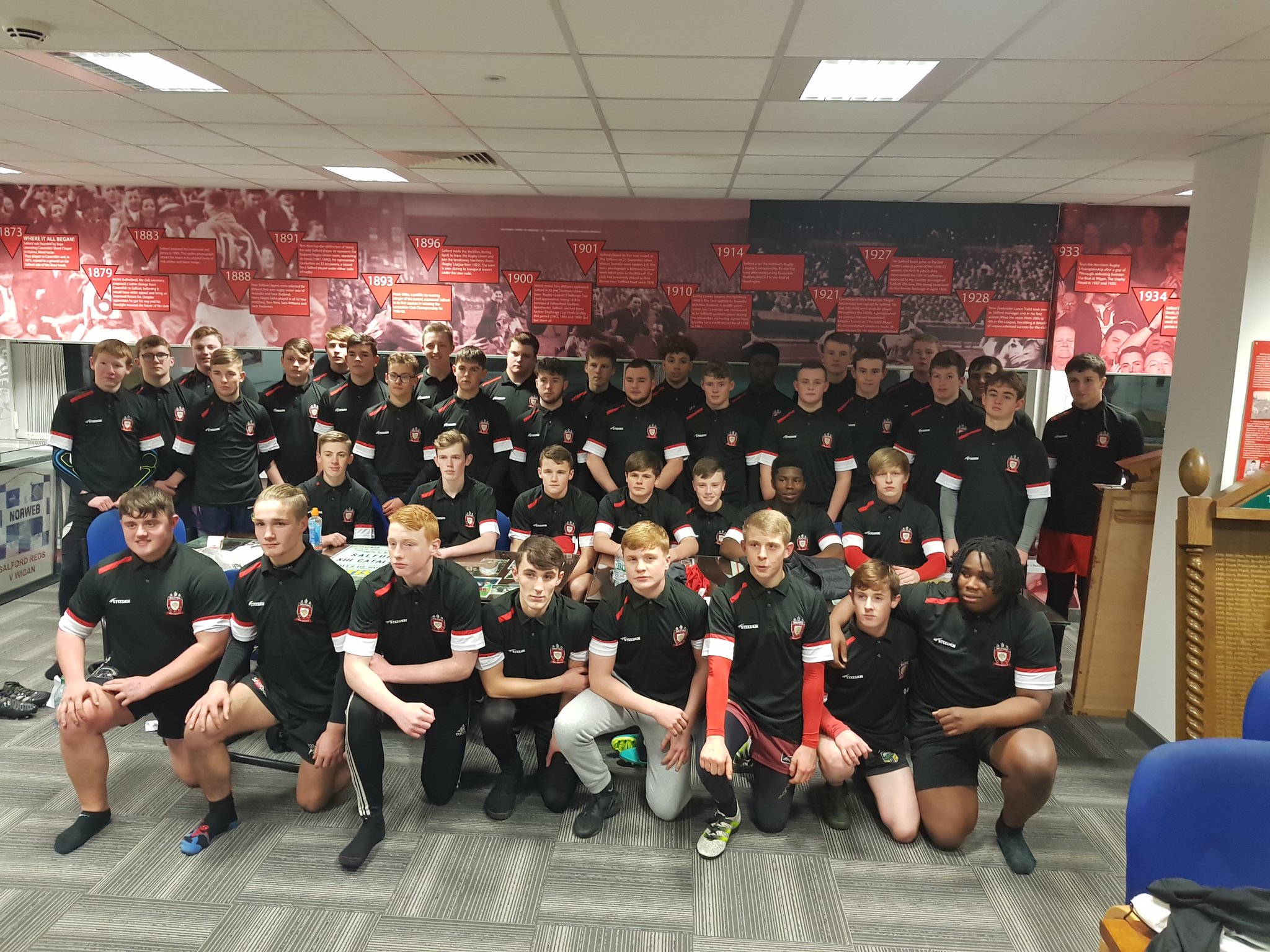 Salford U19s College Academy fell short in their away quarter final of the College National Cup, against Halifax, at Siddal ARLFC, despite a plucky effort from each and every one of their players.
Even before they travelled across the Pennines the whole context of the game was stacking up against them, since, with only thirteen fit players, they were all forced to play through the full game without any respite, and were, furthermore, reduced to twelve men for the final ten minutes as a result of yet another injury,
That would have been difficult enough against any opposition, but the League 1 Red Devils were up against a bigger, pacier side currently in second place in the Premier League, which is a division above Salford.  Indeed, the Yorkshire team had travelled to St Helens and beaten top League 1 side Cowley College, in the previous round.
Despite all this, the Red Devils dug deep throughout the eighty minutes, as outlined by assistant coach, Jay Boyd.
“The lads really put their bodies on the line,  never gave up until the final whistle, and showed the right attitude throughout,” he proudly reports.
Halifax got off to a great start and were 16-0 up within the first 15 mins, but the Red Devils managed to hit back and clawed back some of that initial deficit with a score of their own.  They forced an error from the home side, and then with the aid of two penalties, opened up the opposition defence, on 20 mins, for Will Mills to cross out wide on the left-hand side, from where goalkicker, Tom Farr, landed a magnificent conversion.
This, however, merely served to spur their hosts on to greater determination and effort, and sadly for the unfortunate Reds, they took control of the game from that point on, finishing the half with 28-6 half time advantage. As often happens, when one team is deprived of the ball for lengthy periods, when the visitors did get some possession the tension and anxiety was such that they turned it over again, quite quickly.
“We were really clinging on to stay in the game, in that later period of the first half,” assesses Jay, “but in the circumstances we did really well to keep them down to that score, because they had had so much possession, and our lads were having to do so much energy-sapping defending.
“Halifax were a really good outfit and they kept getting up into our faces and trying to force errors from us.”
Although shortly after the resumption Halifax extended their lead even further, the half time discussion had given the Salford lads some renewed fortitude and they immediately responded with their second try of the game, again through Will Mills from a blindside play by fullback, jack Ratcliffe.  Tom Farr then had a much more straightforward attempt with his second successful conversion.
So much did this inspire them that they really buckled down to match the opposition, set for set, in a belated arm wrestle for a full 25 minutes, without any further score.
“We just went with them for back-to-back sets without anyone scoring, and really matched them for this full period,” Jay considers.
The lack of any interchanges was to catch up on the Red Devils eventually though, which, coupled with the amount of defending they had had to do, left them totally out of energy by the closing stages, and the Yorkshiremen took full advantage to run up a cruel and perhaps little unfair-looking scoreline. No-one, however, could gainsay the courage, stamina, and sheer determination the visitors had shown.