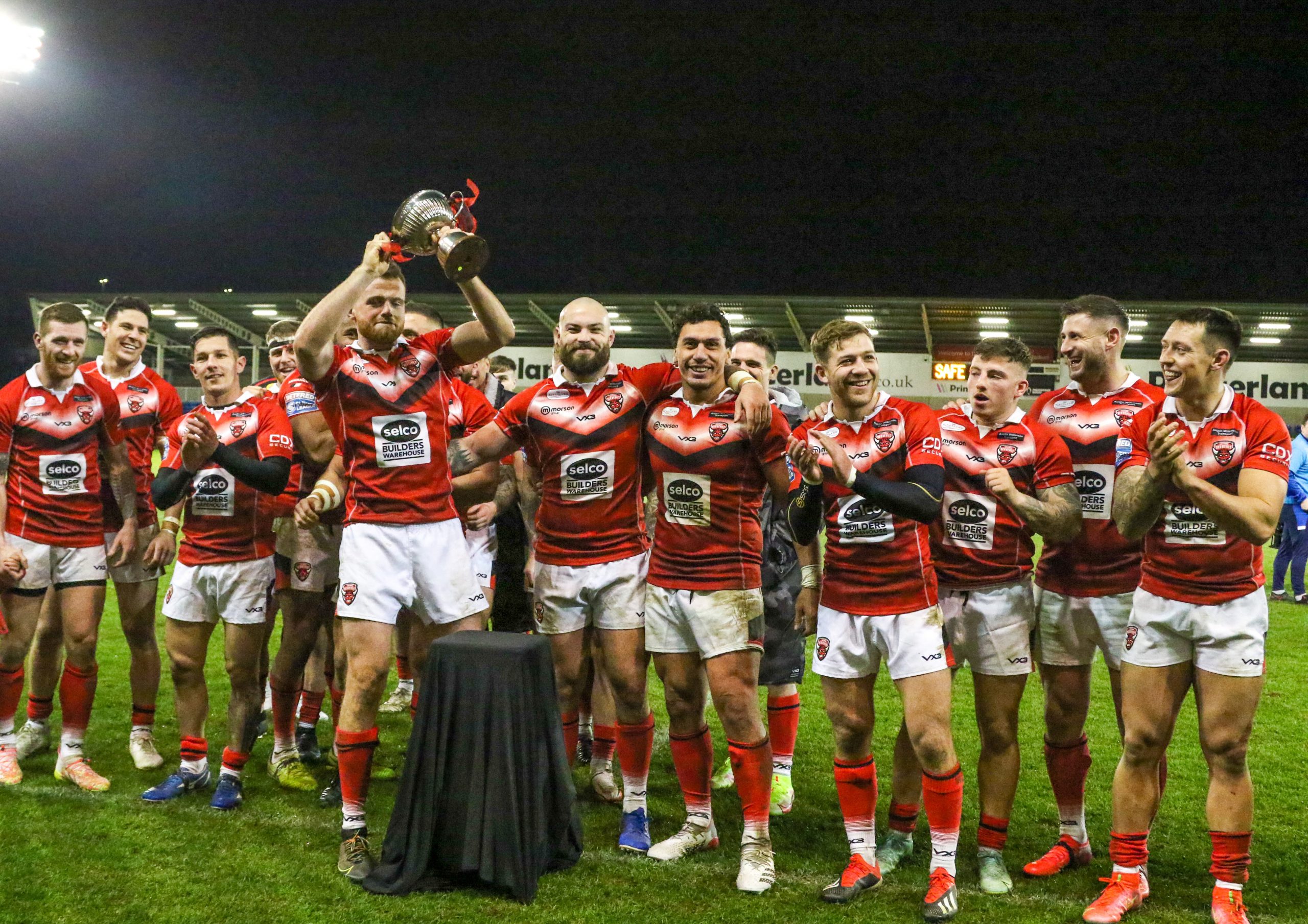 Salford Red Devils retained the Colin Dixon Memorial Trophy this evening with a 34-10 victory over Betfred Championship side Halifax Panthers.

Paul Rowley’s men opened the scoring after six minutes with an impressive bit of link-up play between Ryan Brierley and Ken Sio. Salford worked the ball right with Brierley finding Sio on the wing, who then returned the ball with a neat grubber kick into the in-goal area that Brierley was first to dive on.

Brierley doubled his try tally for the evening just four minutes later after Brodie Croft broke down the middle, weaving through a handful of Halifax players in the process, before kicking the ball towards the right wing for our number 1 to scoop up and stroll over with.

The visitors pulled one back in the 23rd minute through Joe Keyes, who spotted a gap and darted over to the left of the sticks.

Five minutes later, King Vuniyayawa powered through three Halifax players to crash over under the sticks just minutes after coming on.

Halifax started the second forty on the front foot and were boosted when Joe Burgess saw yellow in the 49th minute for a professional foul.

Salford responded well though with another try just two minutes later. Amir Bourouh, who spent a loan spell at Halifax in 2021 during his time at Wigan Warriors, bundled over in the right corner to put Salford back in control of the arm wrestle.

Welsh international Rhys Williams got himself on the scoresheet for Salford 10 minutes later, after some fast hands down the right from his teammates gave him an almost clear route to the try-line.

The last Salford try of the night came courtesy of Matt Costello, who was gifted the ball from Halifax just metres out from their try-line.

The visitors responded just before the hooter with a try in the right corner, scored by James Saltonstall, but it was merely a consolation. 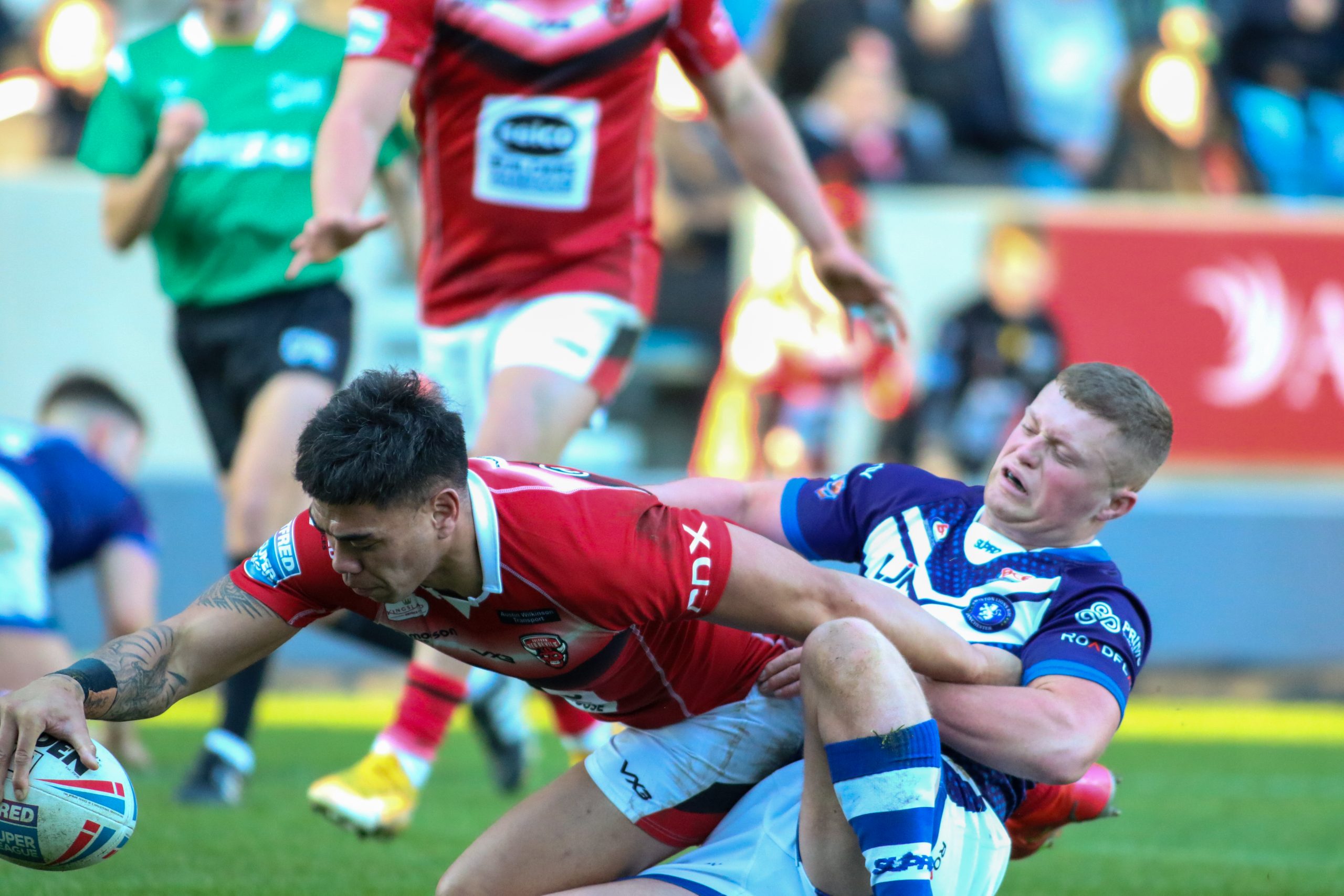 As was probably widely expected, Salford Red Devils concluded the first of this season’s three friendly games, with a comfortable 48-12 victory, at the A J Bell, on Sunday afternoon, over their historic, local rivals, Swinton Lions.  The scoreline might have appeared that way, but the plucky visitors, at times, tested their hosts to the hilt, particularly at the commencement of each half.

The opening ten minutes to the encounter saw the Lions firmly established in the Salford twenty metre area, where they launched foray after foray of attacks on the home team’s line.  Although there was nothing on the scoreboard to show for it all, they did force a couple of goal-line drop-outs, and were somewhat unfortunate to lose the ball in the act of crossing the line, on one occasion.

There is nothing like back-to-back tries, however, to put aa team in the driving seat, and it was not a case of two, but three scores in a five-minute blitz, between the 11th and 15th minutes, which put the Red Devils 14-0 up and firmly in command, thereafter.

The Lions’ period of ascendency, at the start of the second half, however, was rather more protracted, and considerably more rewarding in terms of points.  It was fifteen-minutes into the half before the impasse was broken with the first of their two tries, when Salford failed, close to their line, to secure a loose ball from a Swinton kick.

Unlike their Super League opponents, however, they were unable to make their scores back-to-back, with the Red Devils cancelling out this first one, four minutes later, with a try of their own sandwiched between the Lions’ pair, the second of which came as a result of Salford players being foxed by a tricky kick-off, and former Salford U19s forward, Will Hope, took advantage to double their score.  Indeed, Swinton had had an earlier success in reclaiming the ball from one of their own kick-offs, in the first half.

For Salford, though, the outing was more one for performance, and in this respect there was much to please the home fans, with the left flank looking absolutely unstoppable and most incisive on attack, and indeed not only did those first three back-to-back tries come down that edge, so too did a couple of others, later.

Not to be outdone, however, the right side also featured, courtesy of Ken Sio’s brace, coming singly in each half, and he would appear to be every bit as reliable in crossing as he was in last season’s leading SL try-scoring feat. With three defenders left straggled on the ground for his first, it might have seemed to have been as a consequence of weak tackling, but we are all only too aware of the surprising power in his hit-ups against much more experienced opposition to be lulled into that kind of thinking.

True there were a few issues, which, so early in the season, and with so many newcomers into the side, is hardly surprising.  Many of these appeared to be around timings, as exemplified by Sam Luckley’s premature run onto Brodie Croft’s chip kick and the consequent disallowing of his try between the posts.

It was particularly encouraging to see so many of the tries going to new players in the team, with Brodie Croft, Ryan Brierley, Deon Cross, and Shane Wright joining established Salfordians Andy Ackers, Matt Costello, and Rhys Williams, who all also crossed for a try apiece.

The visit of Halifax, this coming Friday evening, will see an upping of the intensity before a full-on Super League level clash, at Warrington, KO 7.30pm, concludes the preparations for the 2022 season. 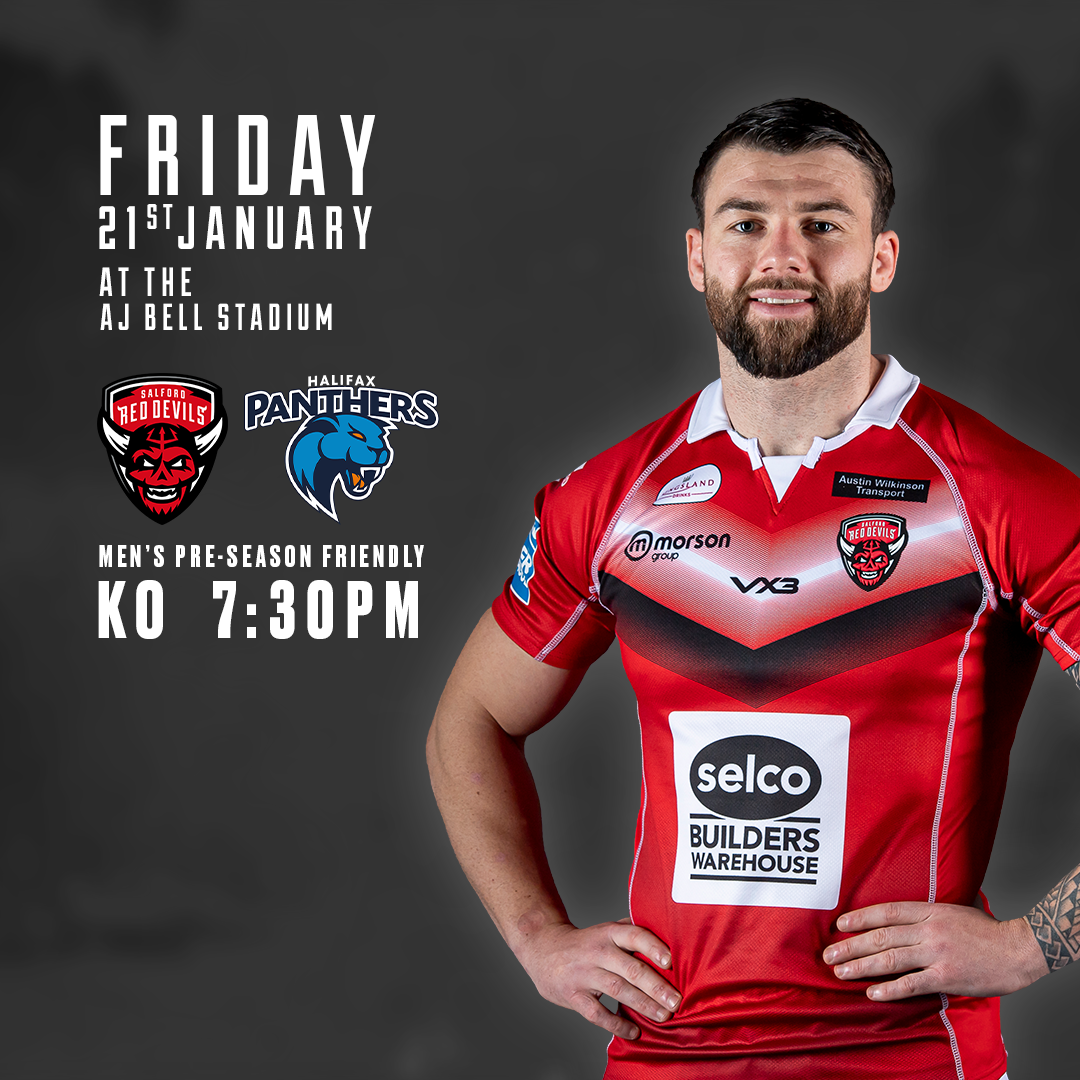 We host the Betfred Championship side at the AJ Bell Stadium and this will be a good test for new head coach Paul Rowley, a former Halifax man during his playing career.

Young Salford hooker Amir Bourouh, who recently turned 21, spent time with Halifax during the 2021 season so will be very familiar with the opposition come Friday 21st January.

Only the West stand will be open, with Halifax fans situated on the side closer to the North Stand and Salford fans allocated seats towards the South Stand.

At as little as £10 for an adult ticket, you don’t want to miss this one!

Friday night under the lights returns, and you can show your support of Salford Red Devils in 2022 by purchasing your match ticket HERE. 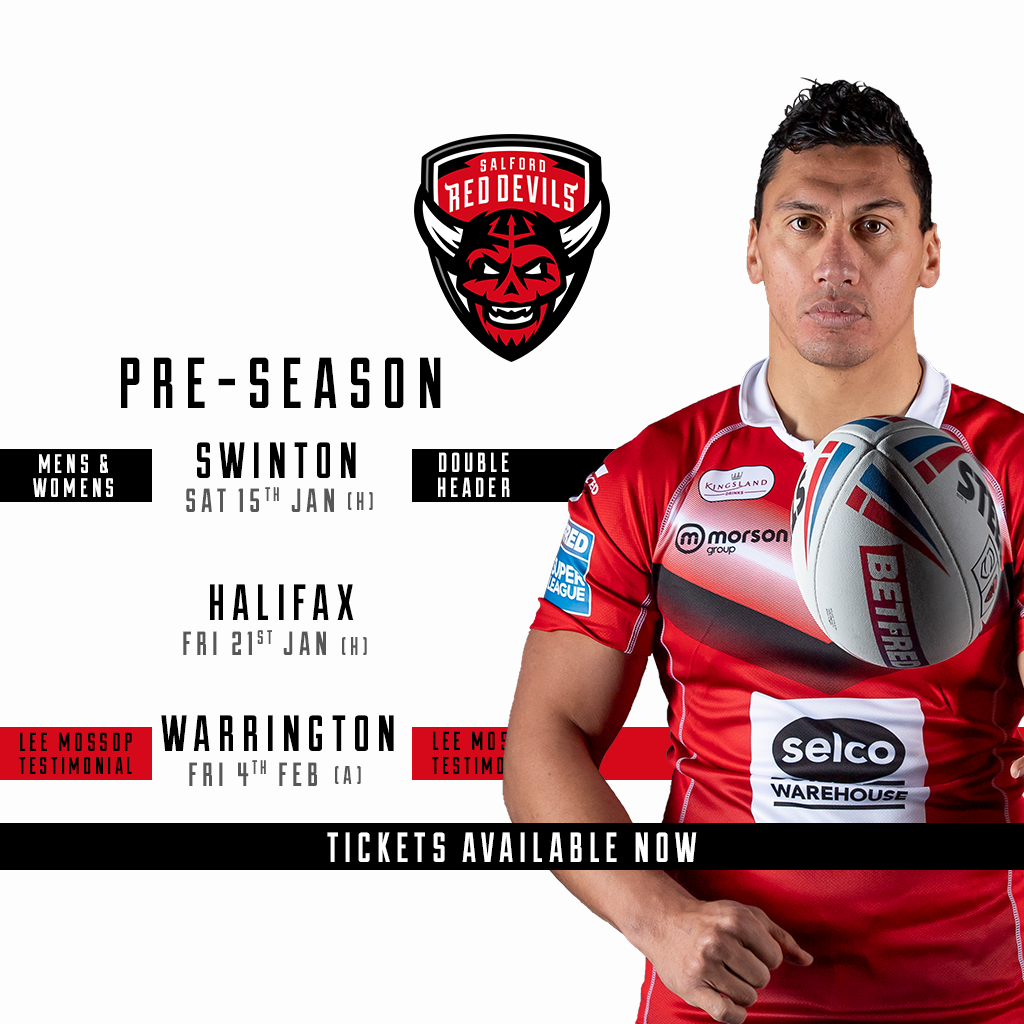 Salford Red Devils are delighted to announce our pre-season fixtures ahead of the 2022 season.

Preparation for the 2022 campaign will begin on Saturday 15th January against Swinton Lions, kick-off at 2 pm, with our Women’s team playing their first-ever game against Swinton Lionesses on the same day, at 11:45 am, in what promises to be an exciting doubleheader at the AJ Bell Stadium.

On Friday 21st January, Paul Rowley’s men will host Betfred Championship outfit, Halifax Panthers, a team that our head coach represented for six years during his playing career and the side that our new hooker, Amir Bourouh, spent a spell on loan with during the 2021 season. This clash will kick off at 7:30 pm at the AJ Bell Stadium.

Our last test of pre-season comes in the form of an away trip to The Halliwell Jones Stadium on Saturday 4th February to play Warrington Wolves, kick-off 7:45 pm, in what will be former club captain Lee Mossop’s testimonial game. Tickets are sold through the Warrington Wolves website, Salford Fans should note the seating arrangements for home and away supporters before purchasing.

Tickets are available now for all three of our pre-season fixtures. 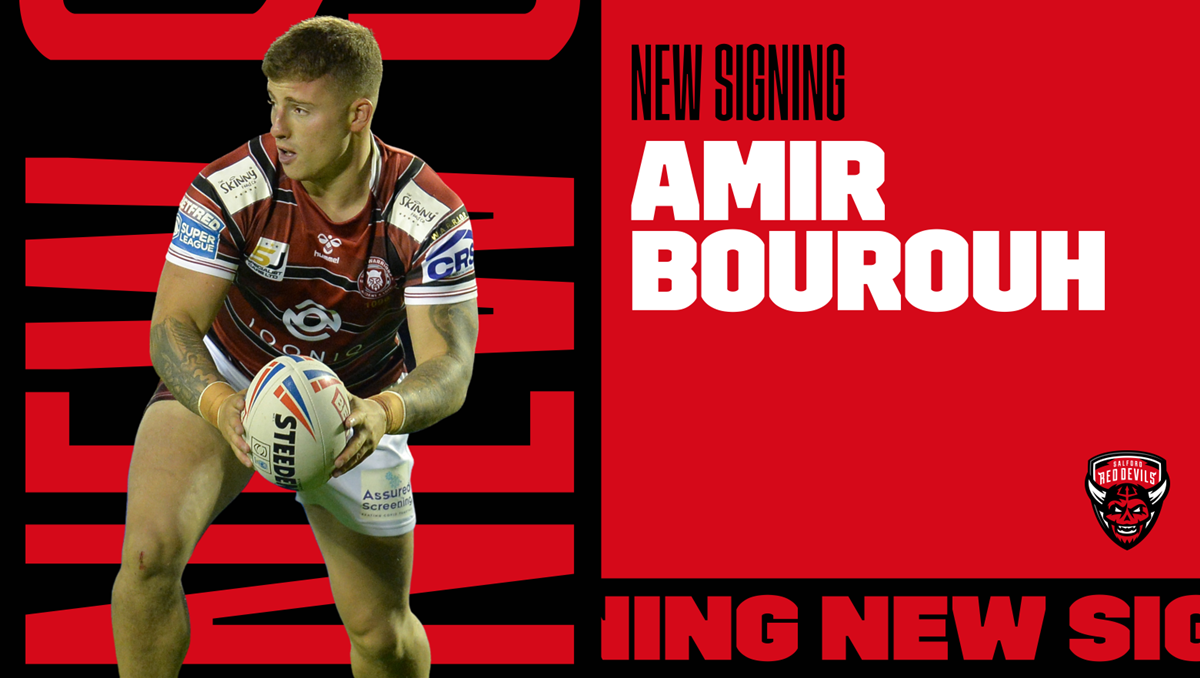 Salford Red Devils are delighted to announce the signing of Wigan Warriors hooker Amir Bourouh on a two-year deal, with the option of a further year.

The 20-year-old made his Betfred Super League debut against Salford in 2019 for Wigan, going on to make 7 appearances for the Warriors before being loaned out to Betfred Championship side Halifax Panthers this year.

Bourouh, who will arrive at Salford at the end of the year, has impressed during his 11 appearances for Halifax, scoring two tries and picking up a Man of the Match award in the Panthers’ 17-16 victory over Widnes Vikings in July.

Speaking on signing for the club, Bourouh said: “I’m really excited to play for the club and in front of the Salford fans.

“After speaking with Richard (Marshall) and Ian (Blease) and seeing their ambition for the future, my decision was easily made.

“I want to challenge myself in the Super League and hopefully contribute to success in years to come.”

Salford Red Devils head coach Richard Marshall, who was head coach at Halifax from 2015 to 2019, said: “Amir is a promising young hooker who I’ve been monitoring for a while. He’s shone during his loan spell at Halifax and after speaking with my connections there, they were very impressed with him and couldn’t speak highly enough of his qualities.

“There was quite a bit of interest in Amir and we are certainly pleased he has chosen us to continue his development. He will work really well with Andy Ackers and I am looking forward to working with him over preseason and beyond.”

Director of rugby and operations Ian Blease added: “I was so excited when I watched Amir live this season, more so in a player that I’ve not seen for some time.

“He’s a young gun looking to progress at Super League level but we will look after him the ‘Salford Way’ and let him develop his true potential with us in the long term deal we have agreed.

I can’t wait to start to develop something special at the club with Amir, he’s got it all. We will give him the platform to get to the top.”

Bourouh is the latest addition to Marshall’s squad ahead of the 2022 season, with halfbacks Ata Hingano and Brodie Croft also recently signing for Salford.