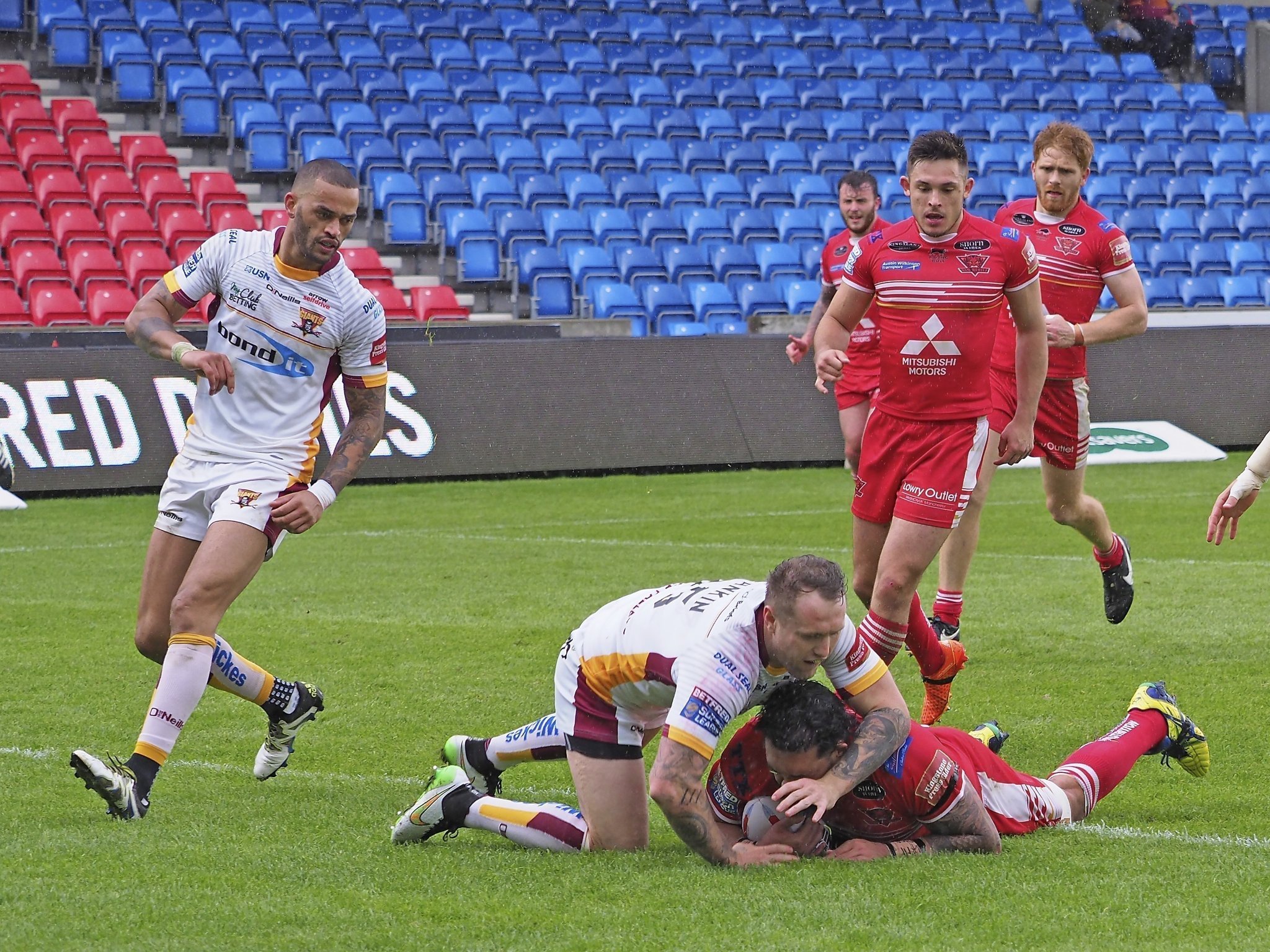 The Red Devils returned to winning ways with a dominant nine-try display against Huddersfield at the AJ Bell Stadium.
Kris Welham and Manu Vatuvei both crossed for braces while Tyrone McCarthy, Niall Evalds, Jake Bibby, Ben Murdoch-Masila and Josh Jones also got themselves on the scoresheet.
Ian Watson’s men got off to the perfect start as Welham latched onto a neat kick from Robert Lui to open the try-scoring on a fruitful afternoon for the Red Devils. Gareth O’Brien had kicked a penalty goal in the opening minutes to get the scoreboard ticking.
After scoring his first Super League try for Salford last weekend McCarthy made it two in two games at the AJ Bell Stadium forcing his way over from close-range. Fellow mid-season signing Vatuvei powered his way over shortly after scoring his first out wide.
Murdoch-Masila was a constant thorn in the Giants side and his quick hands put centre Welham over the line for his second. Salford made it two tries in as many minutes as Evalds was the beneficiary of some smart link-up play between Lui and Murdoch-Masila.
Jermaine McGillvary scored in the final minute of the first half however the Red Devils went into the break with a 26-point lead.
However, any chance of a Giants fightback was stopped in the opening minute of the second half as Vatuvei managed to score following Junior Sa’u’s pass. Jake Bibby, who was a late replacement for Greg Johnson, scored with an acrobatic finish in the corner shortly after.
Oliver Roberts managed to spin his way over but it didn’t slow down the Red Devils dominance as O’Brien added another penalty goal before Murdoch-Masila took three defenders over the line with him.
With five minutes remaining Jones rounded off the Salford scoring as he burrowed over after several offloads. Ryan Hinchcliffe scored late on for the Giants but it was a comfortable victory for the Red Devils.
Red Devils: Evalds, Bibby, Welham, Sa’u, Vatuvei; Lui, O’Brien; Kopczak, Tomkins, Hauraki, Murdoch-Masila, Jones, McCarthy. Interchanges: A.Walne, Brining, Lannon, J. Walne.
Giants: Rankin, McGillvary, Mellor, Turner, Ormsby; Gaskell, Brough; Ikahihifo, Leeming, Ta’ai, Roberts, Ferguson, Hinchcliffe. Interchanges: O’Brien, Rapira, Lawrence, Clough. 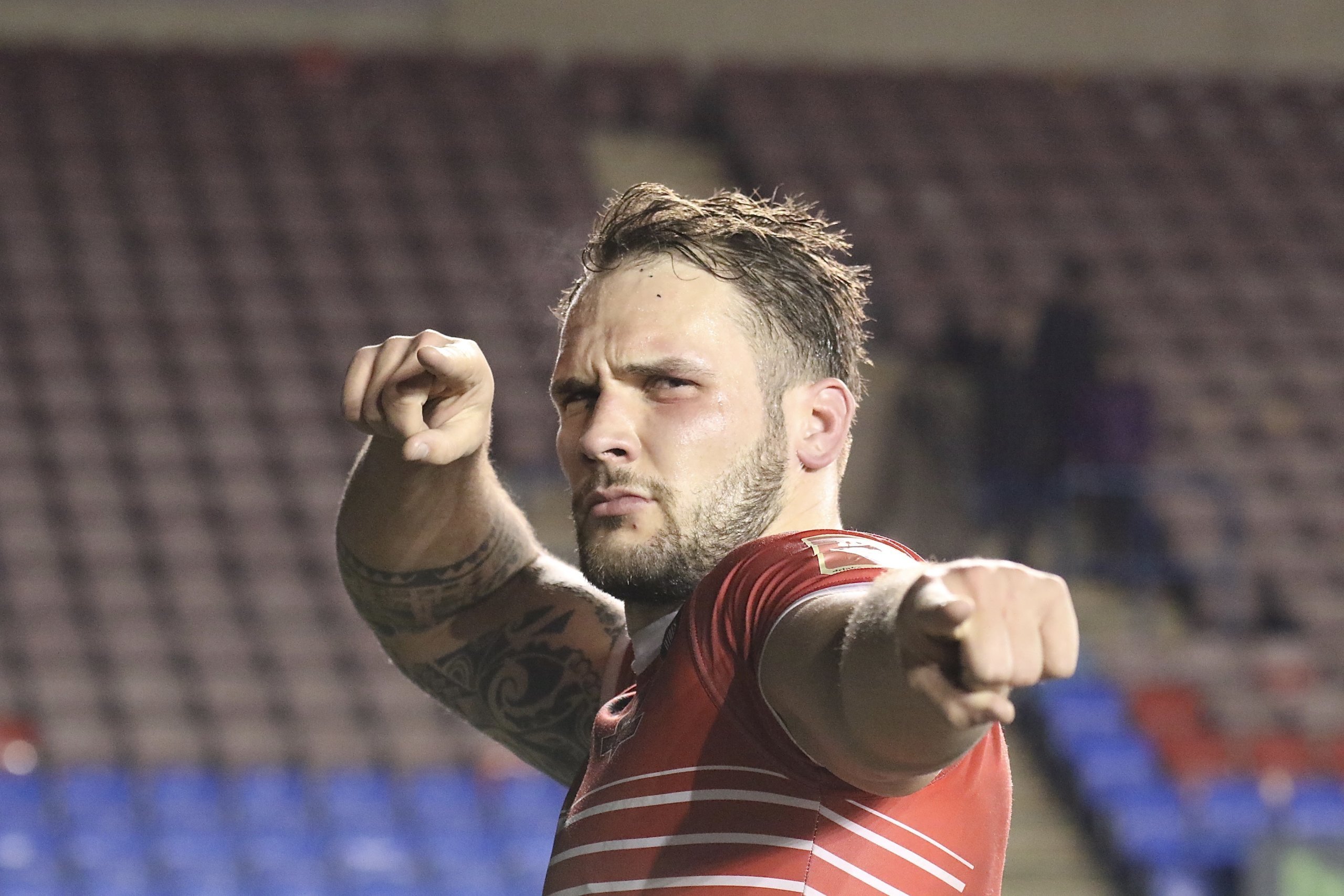 Salford Red Devils stars Josh Jones and George Griffin are backing a campaign that aims to encourage men to look out for their mates.
The campaign is run by Time to Change and the ‘In your Corner’ campaign highlights that you don’t need to be an expert to be there to support a friend with a mental health problem.
‘In your Corner’ has already been extremely successful receiving backing from sports stars such as footballer Clarke Carlisle, former boxers Frank Bruno and Ricky Hatton and golfer Justin Rose.
With one in four people fighting a mental health problem in any given year, Jones and Griffin are joining an elite list of sports stars calling on men to step in if their mate is acting differently.
Jones, sponsored by Oakwood Engineering, said: “My biggest challenge mentally has been with anxiety and depression.
“I’d never spoke about it and it got bigger and bigger until one day, I was probably ready to be done with rugby league.
“Luckily I had the support of those around me and got the right help.”
While Griffin, sponsored by Super Josh, added: “Sometimes the stresses and strains of the game can take its toll.
“Everyone always wants to impress and make people proud, not just others but themselves. If performances drop and people and people notice and it can be hard to get confidence back.
“But being part of a team is awesome and having people in the wings if you do need support is invaluable. The atmosphere and camaraderie amongst the boys is great.”
Sue Baker OBE is the Director of Time to Change run by Mind and Rethink Mental Illness and she is pleased to have the Red Devils duo on board.
Baker said: “We’re delighted that Josh and George are throwing their weight behind our In Your Corner campaign.
“Their support will help us spread the message across the rugby league community that men should be looking out for each other’s mental health as part of being a good mate.”
For more information regarding the campaign visit the Time to Change website.
Tickets are still on sale for the Red Devils return to the AJ Bell Stadium against Castleford on Friday night. Supporters can purchase tickets over the phone, from the club’s ticket office or online via the club’s website. Fans are reminded that season tickets are still valid for all Super 8s home fixtures.

The Salford Red Devils are delighted to announce that Oakwood Engineering are continuing their support of the club through the sponsorship of new signing Josh Jones for the 2016 season.
Hailed as ‘leaders and innovators in the construction industry,’ Oakwood is a consultancy, based in Eccles that specialises in delivering solutions that support clients in the build environment throughout the project lifecycle.
They’ve worked on a number of projects in the local area and beyond including our very own AJ Bell Stadium, Wembley Stadium and the new Manchester Victoria Station. They have received global recognition for innovation as well as winning Salford Business of the Year 2014.
Oakwood Engineering have been loyal supporters of the Red Devils for a number of years and in 2015 sponsored Cory Paterson. They’ll be continuing their investment in the club through their sponsorship of Josh Jones this year.
On sponsoring Josh they said, ‘As a local company, we are proud to support Salford Red Devils and we are delighted to be associated with a player of Josh Jones’ calibre. He is a superb addition to our squad and an absolute grafter. Salford is a great club and we wish them the best of luck for the remainder of the season.’