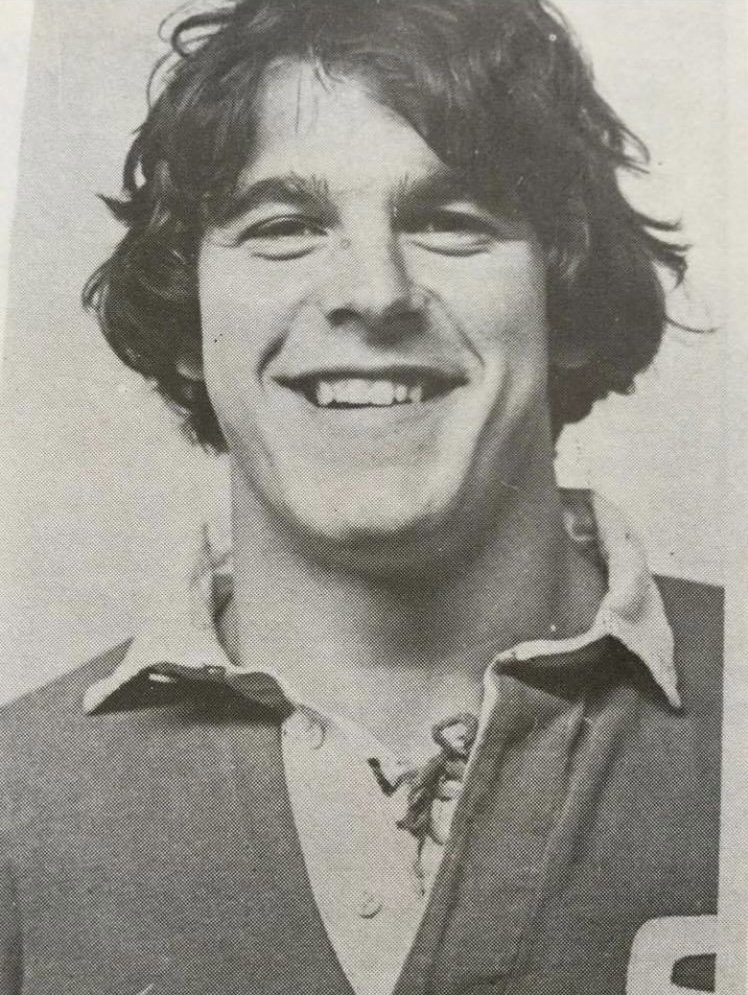 It was with the deepest of regret that Salford Red Devils learned of the passing of their former centre, David Stephenson, on the 16th March, 2022.

David signed to join Salford, from Fylde Rugby Union Club, in December 1978, and made his debut on 23rd January, 1979, in a home match against Rochdale Hornets, which Salford lost 4-13.  Nevertheless, David acquitted himself well, and he became a regular presence in the team for the following three years.

During that time, he was involved in two key matches, during his first year.  The first was the Centenary Celebration Match, at The Willows, on the 14th October, in front of a crowd of almost twelve thousand.  The game was intended as a replication of the club’s very first match, the previous century, with the team discarding their normal red shirts for their original strip of red, amber, and black hoops.  That first match had been against Widnes, and it was they who provided the opposition, on the day, a hundred years later.  Most remarkable of all was the fact that both games ended in a draw, this second one finishing 16-16.

Three weeks later, the two teams met in the semi-final of the John Player Trophy, at Warrington.    This time, Widnes went on to reach the final, with a 19-3 victory.

Such was David’s s skill and talent on a rugby field that, whilst at Salford, he was twice selected to represent Lancashire, against Cumbria, at Barrow, in 1980, and the following year against Yorkshire, at Castleford, both of which encounters were won by the home sides.

He was also selected to represent Great Britain, at Under-24 level, on four occasions.  Three of these were against France, all of which were won by the British.  Having beaten the French, 14-2, at Leigh, ,in 1979, David scored a try in each of the remaining two, at Carcasonne, a year later, where they won 11-7, and finally, at Headingley in 1982, where the score was 19-16.

His one reversal, at this level came in 1980, when New Zealand provided the opposition, at Fulham, where they were the winners 18-14.  He did, however, go on to receive further representative honours whilst with other clubs.

Over his three years, at The Willows, he made ninety-seven appearances and amassed a total of one hundred and sixteen points, comprising of thirty-six tries, two goals, and four drop-goals.

Sadly, by now, other clubs had designs on him, and he bowed out on 29th January, 1982, in Salford’s home 7-19 defeat to Carlisle, before moving on to join first Wigan, later Leeds, and finally Leigh, before returning to Salford to play one more match, on the 13th March, 1991, in the home fixture with Chorley Borough, which the hosts won, 46-2.  David came on as a substitute, and celebrated his return by scoring a try, to add to his tally above.

David is fondly remembered at Salford for his allegiance to the club, during his period with us, and our thoughts and sympathies go out to members of his family for their sad loss. 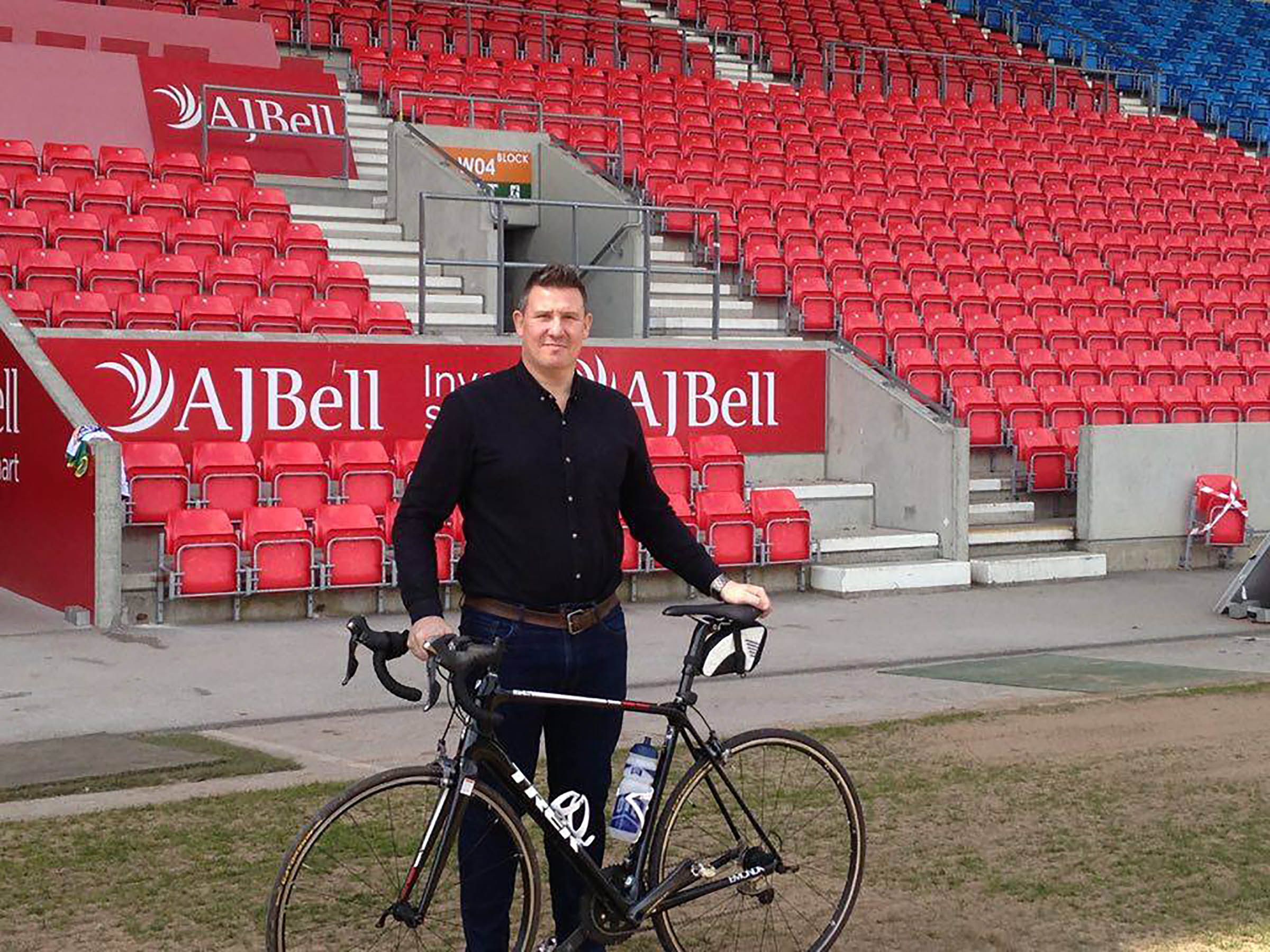 Former Red Devil Paul Highton is cycling from Leeds to Wembley Stadium for Rugby League Cares. The cycle started at Headingley Stadium, 8am on Monday 21st, and the team of 15 riders are set to arrive at the Wembley Legends statue on the eve of the 2017 Challenge Cup final – Friday 25th August.
Highton, speaking to Rugby League cares, said: “Cycling to Rio was one of the best experiences of my life and though the ride to Wembley is shorter, it’s going to be a fantastic five days.
“We may not have to cross the Pyrenees to reach our destination but this ride isn’t about mountain ranges or distance, it’s about overcoming the challenge of negotiating a testing off-road route.
“I’m expecting it to be tough: the bike is heavier for a start; I’m a year older and the nettles and brambles along the way are really going to hurt!
“Firstly, I’d say that nothing is going to be as tough as that first day when you don’t know what to expect your body is going to react to spending eight hours and more in the saddle.
“That feeling is like nothing else,” he added.
“Secondly, it’s important to keep your head up and take in what’s around you: how many people get to experience the beautiful countryside we have in the UK at such close quarters for five days? Soak it up!
“Finally, make sure you have a laugh: yes, there will be dark moments, and days when it feels tough, but the sun always comes out again and riding as a team is a real breeze, especially when you know you’re doing it for such a worthy cause.”
‘Highto’ has made big contributions to the men’s health and wellbeing project ‘Offload’ and has worked in conjunction with club foundations at Salford Red Devils, Widnes Vikings and Warrington Wolves.
Highton said: “Some of the impact Offload has made to the people involved has been nothing short of amazing.
“No-one was quite sure at the start whether men would buy into it but it’s been a transformational experience for a lot of people.
“The bonds that have been forged between the participants are really uplifting to witness. At Warrington, one member of the team said he was worried how he’d fill the void in his life after his 12 fixtures were up and they’ve all agreed to carry on meeting to support each other.
“It’s made a profound difference to the lives of a lot of men who previously felt they had no-where else to turn.”
To sponsor Paul, please visit his Just Giving page –  www.justgiving.com/fundraising/Paul-Highton.