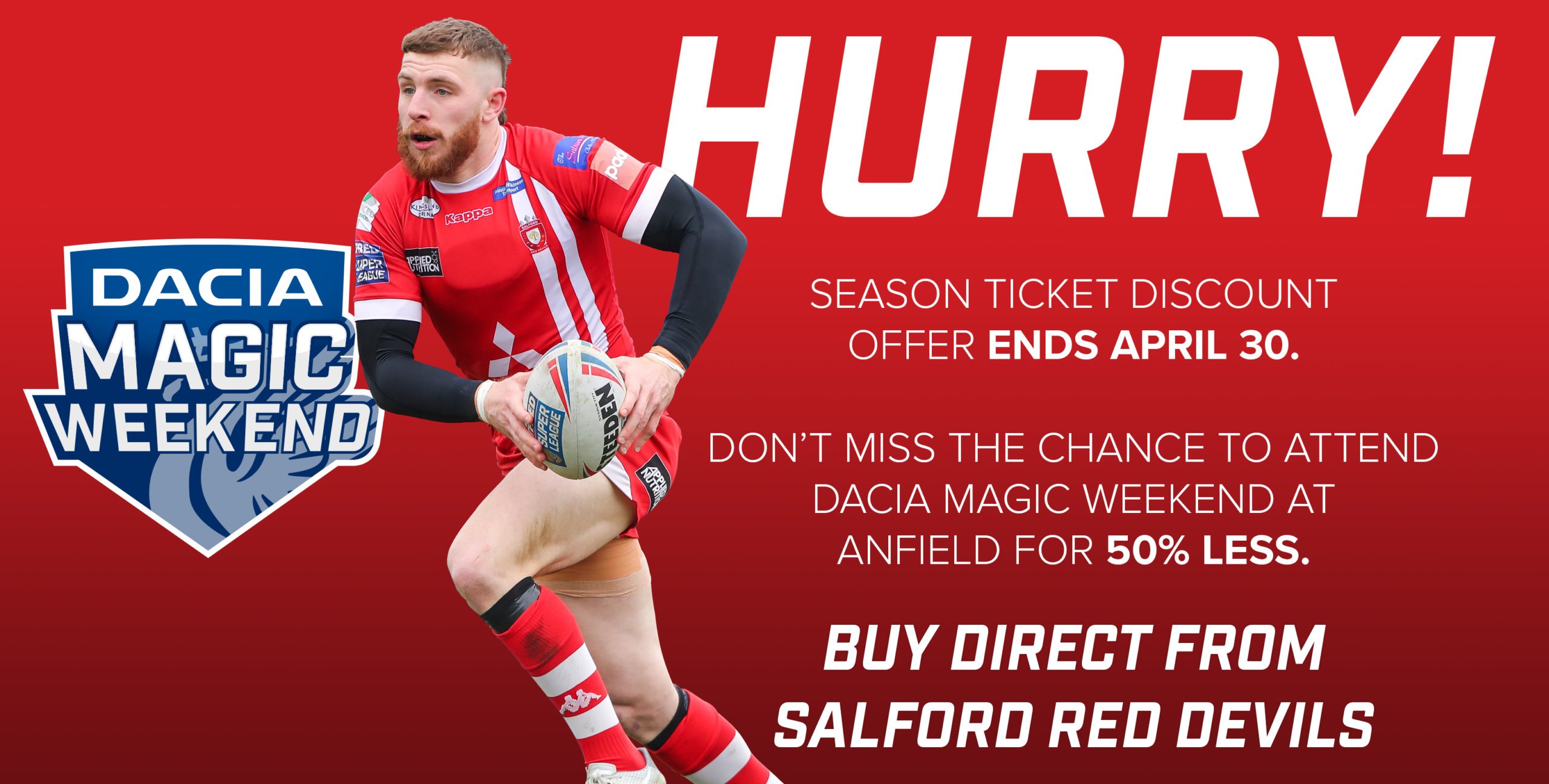 The 50% discount offer for season ticket holders to attend Dacia Magic Weekend at Anfield to watch Salford Red Devils go head to head with Hull Kingston Rovers ends April 30 at midnight.
The Red Devils will be looking to earn a second victory of the season against Hull Kingston Rovers on Sunday 26th May as the Dacia Magic Weekend returns to the North West.
Both single day and weekend tickets are available to purchase online.
Salford Red Devils Category Three allocation is in The Kop end while Category Two unreserved seating is in the Kenny Dalglish Stand.
Any Salford Red Devils supporters wishing to purchase wheelchair spaces must contact 0844 856 113 or ticketing@rfl.co.uk.
Tickets are available at the AJ Bell Stadium Ticket Office and over the phone on 0161 786 1570. Please remember, if you purchase from Salford Red Devils, the Club retain 100% of your purchase fee.

Book onto the supporter’s coach for the Dacia Magic Weekend game at Anfield against Hull KR now.
Details on pick-up times are as follows:
Chandos Sports and Social Club: 10:15AM
Royal Sovereign: 10:30AM
Eccles Town Hall: 10:40AM
Dog and Partridge: 10:50AM
AJ Bell Stadium: 11:10AM
You can book your place for £15.00 at the AJ Bell Stadium ticket office.

Salford Red Devils have partnered up with Salford Royal NHS Trust Foundation to bring you out our limited-edition 2019 Dacia Magic Weekend shirt which will help raise vital funds for heart monitors for patients who have had a stroke.
Salford Red Devils will be donating £5 to Salford Royal heart monitor fund for each shirt sold.
Director of Rugby and Operations, Ian Blease, said: “We are really pleased to release our 2019 Dacia Magic Weekend shirt in support of a fantastic local cause.
“We have recently agreed a formal partnership with Salford Royal and this amazing shirt is a key element of that agreement.
“Helping a local cause has become something we’ve done every year via our Dacia Magic Weekend kits and that was a major part of our thought process behind this year’s design.
“I have no doubts that the Salford Red Devils faithful will show brilliant support for this kit and in turn raise funds for heart monitors at Salford Royal.”
Order one of our 500 shirts now from HERE.
You will receive your 2019 Dacia Magic weekend shirt in the week leading up to our clash with Hull Kingston Rovers. 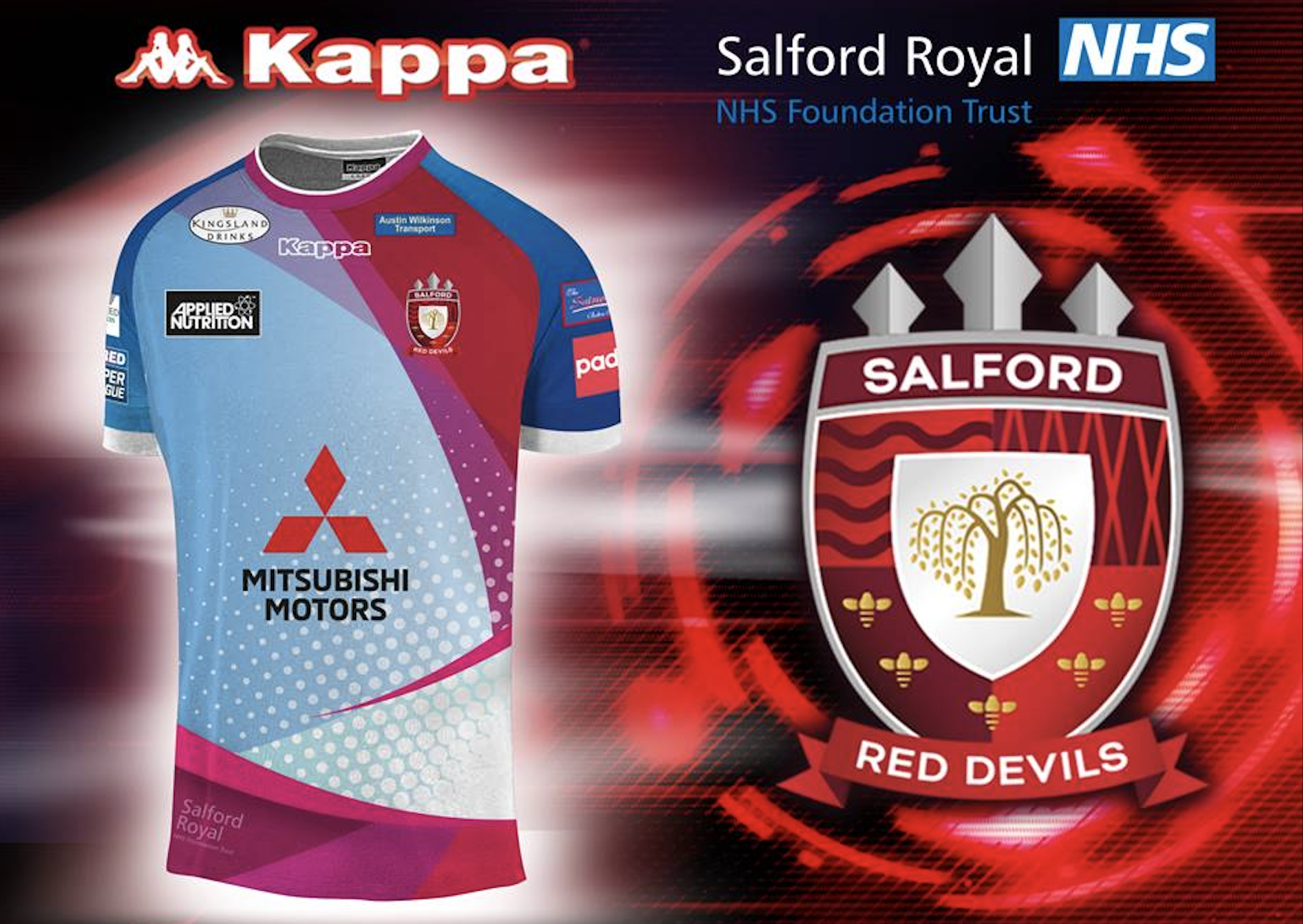 Salford Red Devils are delighted to partner with Salford Royal NHS Trust Foundation to bring you our limited-edition 2019 Dacia Magic Weekend shirt which will help raise vital funds for heart monitors for patients who have had a stroke.
The 2019 Salford Red Devils Dacia Magic Weekend shirt will be a limited-edition with just 500 shirts being produced. Salford Red Devils will be donating £5 to Salford Royal heart monitor fund for each shirt sold.
Director of Rugby and Operations, Ian Blease, said: “We are really pleased to release our 2019 Dacia Magic Weekend shirt in support of a fantastic local cause.
“We have recently agreed a formal partnership with Salford Royal and this amazing shirt is a key element of that agreement.
“Helping a local cause has become something we’ve done every year via our Dacia Magic Weekend kits and that was a major part of our thought process behind this year’s design.
“I have no doubts that the Salford Red Devils faithful will show brilliant support for this kit and in turn raise funds for heart monitors at Salford Royal.”
Salford Royal‘s Chief Officer, James Sumner, said: “We are extremely honored to be chosen as the partner organisation for the club’s Magic Weekend. Heart monitors are extremely important items on our stroke unit and can help our staff identify if a patient is at risk of having another stroke.
“Over the years we’ve welcomed a number of Salford Red Devils players on visits to our wards and services, so we are extremely pleased to now develop this into a more formal collaboration to benefit our patients, staff and the club.”
Wild Thang Director, John Howarth, said: “Working with the Club has been fantastic since day one.
“When we were asked if we could submit some designs using the Salford Royal branding, it was a no-brainer.
“We’ve had some great social media interaction with fans, and I think they’re appreciative of what we are trying to do. We don’t just want to be another retail brand, but we want to fully commit to being partners and working together with the Club.
“We’re hopeful the 2019 Dacia Magic Weekend shirt will be received as well as the home and away shirts, it generates some money for a great cause and Salford Red Devils come away from Anfield with a victory later in the year.”
2019 Salford Red Devils Squad Platinum and Gold members will have been contacted for their shirt sizes and messaging and will receive their shirt in due course. Silver members will use their unique Squad Builder reference number to claim their 10% discount on their shirt.
Please remember there are just 500 shirts to pre-order from. You will receive your 2019 Dacia Magic weekend shirt in the week leading up to our clash with Hull Kingston Rovers.
Pre-order yours HERE.

Tickets for the 2019 Dacia Magic Weekend are still available to purchase with Salford Red Devils facing Hull Kingston Rovers on Sunday 26th May – 1pm kick-off. You can purchase your tickets from the AJ Bell Stadium Ticket Office, over the phone on 0161 786 1570 or online HERE. 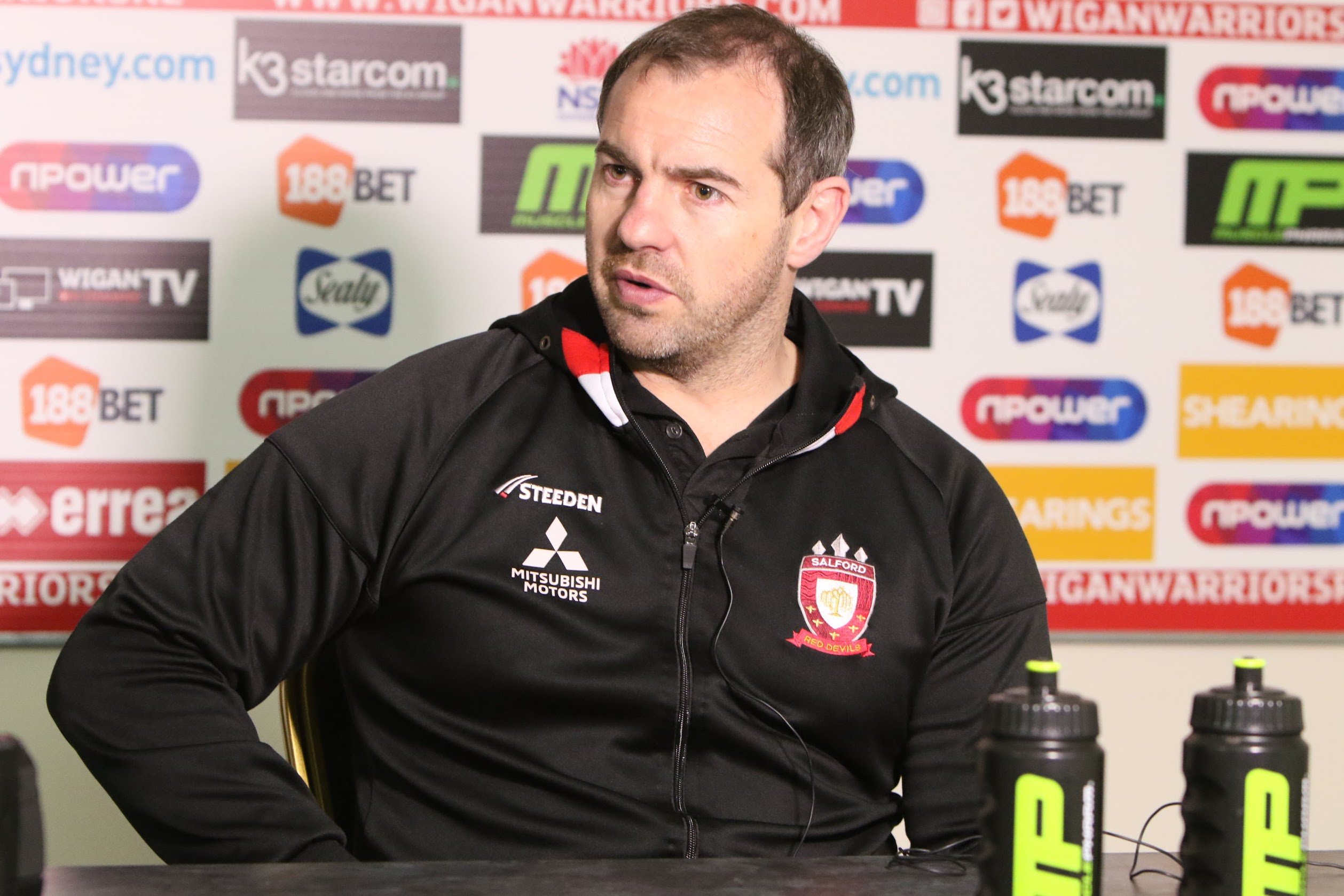 That four week run of high profile matches, which commenced with the televised game against St Helens, culminates this Sunday with arguably the highest profile of all, with our visit up to Newcastle for the Magic Weekend.
The importance of both the occasion, and the encounter there with Catalans Dragons is very much to the forefront of Head Coach Ian Watson’s focus.
Watson said: “It’s a really big showpiece, with the feel of both the Grand Final and Challenge Cup Final with all the Super League teams being involved, it generates a similar profile to each of those, not only for rugby league as a whole, but also for the individual players.”
Indeed, over and above both of these other two events, this is the one occasion each year when every club, every player, and every fan has the opportunity of being involved, or watching their own team participating, in a big occasion, whilst Ian adds a coach’s perspective to the concept.
“It’s also an opportunity to see the majority of all the other Super League players in action.  It has also become a bit of a feeding ground for the NRL clubs, who send their agents and CEO’s over to assess the talent on display. It’s a great spectacle too for the supporters.
“Nevertheless, there is the seriousness of two league points being at stake, which has been our focus for the week.”
As supporters we might have expected that the coaching staff would have been endeavouring to get the specialness of the occasion into the preparations for the team but Ian belies this assumption.
Watson said: “The main thing for us is to take the emotion out of it all, and putting the showpiece element aside, in order to focus on the game, particularly after last week’s disappointment at Leigh.
“One penalty on the fifth tackle followed by a try under the posts swung the game away from us after we had seemed to be on fire, moments earlier.  If you give teams opportunities by failing to complete your sets it is an absolute killer and we were embarrassed by our second half completion rate.
“That, along with decision-making, has been a big aspect of our preparations, this week, because we need to improve on these and look forward positively.
“We had a great training session today [Thursday], with good ball skills, lines run, execution of plays, and decision making on the edges.”
It will be remembered that Sunday’s opponents, Catalans, were the team against whom we played at home last season just a few days after the Manchester Arena bombing, on which occasion donations, in lieu of admission fee, went to the resultant We Love Manchester Emergency Fund.
One year on, on the self-same weekend of the bombing, the Red Devils will be sporting the shirt, dedicated to the memory of the victims and voted – by an extremely large majority – the most impressive of all Magic Weekend shirts on display this year by fans via the Super League Twitter page.
“When you line all that up, it does bring that tragedy into focus and, of course, having that particular shirt, in support of such a noteworthy charity is magnificent especially with it being almost to the day on which it all happened.  We, ourselves, though, must remain clear in our vision of getting winning points on the day.”
That those tragic events came so close to last year’s Magic Weekend certainly will not be lost on Salford fans, many of whom might well have caught the train up to Newcastle, the day before, from a platform on Victoria Station, in very close proximity to where the blast was to be detonated.
“Because it happened so close to home it feels much more real, and so there is a lot more sentiment around it.  We shall be continuing this on Friday next, at the Huddersfield game, when we shall entertain guests affected by the bombing.
“In our own way, through all of this, the club is simply paying its respects to all the victims.”
With Catalans being the one team whom, this year, we shall be playing three times, it would seem imperative, therefore, that we should win at least a majority of these, which means that Sunday’s fixture becomes crucial in this respect, though it comes just as the Dragons are showing signs of improvement.
“They had been playing well ahead of our Good Friday match with them, but for us now, over the next few weeks it’s all about getting the wins, starting with this one, and we are confident that we have the quality within the squad to be able to do this.” 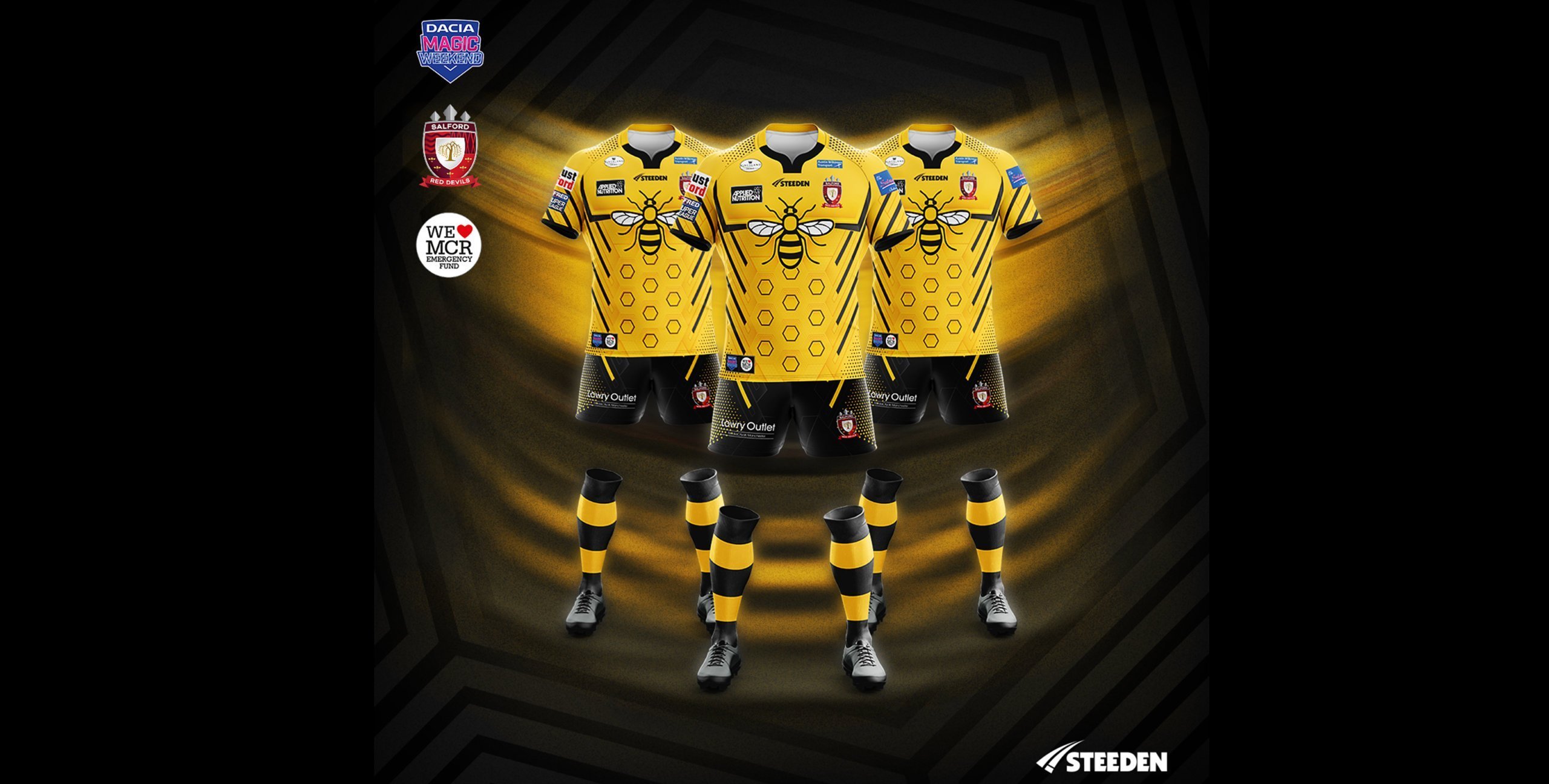 Salford Red Devils Limited-Edition 2018 Dacia Magic Weekend shirt has won this year’s ‘Battle of the Kits’ on the Super League’s Official Twitter page.
The 2018 Limited-Edition shirt is in support of the We Love Manchester Emergency Fund with the Red Devils wearing the kit almost a year to the date of last year’s tragedy at the Manchester Arena.
Mitsubishi Motors moved their Main Partner sponsorship from the front of the shirt to allow the iconic bee symbol which became synonymous with Manchester in the week’s following.
The kit was met with an outpouring of positive publicity and support for the cause on release and has been extremely popular – not just with Salford fans but – with the wider Rugby League community.
Our kit beat St Helens’ Autism Awareness strip in the final – another brilliant Club supporting a fantastic cause.
To read more about the kit click here.
To watch a video produced by The Sportsman on the kit click here.
To order your 2018 Limited-Edition shirt click here.
Below is the Limited-Edition Dacia Magic Weekend shirt for 2018:

Advantage Sports have advised that all Salford Red Devils supporters who ordered their Limited-Edition Dacia Magic Weekend shirt before the cut-off point on Sunday 15th April will receive their shirt before this weekend’s fixture.
Shirts have already begun being dispatched with the first shirts landing with fans last Friday. Deliveries will continue throughout the week up until the end of the week meaning all fans will be able to wear their colours with pride at the Dacia Magic Weekend.
To read more about our Limited-Edition Dacia Magic Weekend shirt, click here.
To visit our online store, click here.
And remember you can still purchase tickets for the Dacia Magic Weekend from the Club Ticket Office and over the phone on 0161 786 1570. Coach travel for the event is priced at £25 for all classes and can be booked at the Club Ticket Office or over the phone on 0161 786 1570.