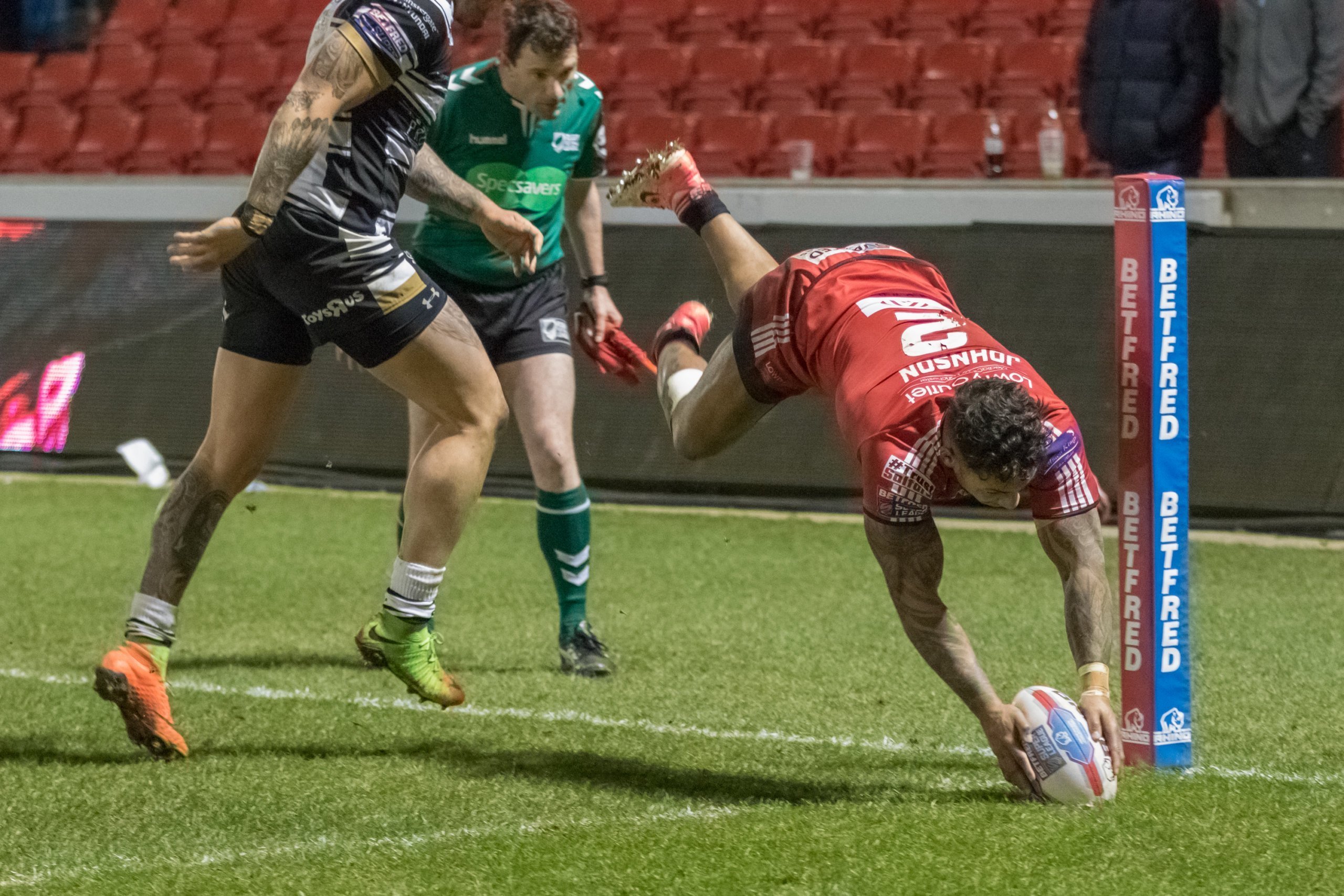 Salford Red Devils travel to Hull FC in search of two crucial points in the hunt for a spot inside the Super 8s.
Here is our preview of the fixture including both teams recent form, team news, full squads and a head-to-head between two players who could be pivotal in the outcome of the game.
Last Time Out
The Red Devils suffered defeat at the hands of Huddersfield Giants in their last outing but did go into the break in the lead thanks to tries from Niall Evalds and Junior Sa’u. The centre did power over for a second late on, but Huddersfield’s comeback had already been complete with scores from Darnell McIntosh, Daniel Smith, Jordan Turner and Kruise Leeming.
Hull FC’s two-year unbeaten run in the Ladbrokes Challenge Cup came to an end last weekend as they suffered a 25-22 defeat at the hands of current Betfred Super League leaders St Helens at the Totally Wicked Stadium.
Albert Kelly, James Green, Scott Taylor and Hakim Miloudi all crossed for Hull FC however doubles from Mark Percival and Regan Grace alongside a terrific kicking display from Danny Richardson, which included a drop-goal, sealed victory for the Saints.
Form
Salford will be looking to get back to winning ways this weekend against Hull FC after a difficult spell in May. The Red Devils came close to turning their fortunes around last weekend against Huddersfield and a victory on Friday evening could see them climb back into the top eight.
FC have had a mixed bag of results lately with the defeat against St Helens following a 30-12 loss to Warrington Wolves at the backend of May. However, prior to this the Black and Whites had won consecutive games against Featherstone Rovers in the Ladbrokes Challenge Cup and local rivals Hull Kingston Rovers at the Dacia Magic Weekend.
Team News
Ian Watson welcomes back Josh Jones into the squad who has been out since the Red Devils last away victory against Huddersfield Giants. Kris Welham has also recovered from an injury he sustained at the Dacia Magic Weekend.
Jack Littlejohn also returns to the squad to face the side he scored his first-ever Red Devils try against. Lama Tasi is also reintroduced into the squad while Ryan Lannon and Gavin Bennion are the two changes from last week’s squad.
Niall Evalds is sidelined with a broken leg which he picked up against Huddersfield a fortnight ago while Kriss Brining also remains out due to injury.
Lee Radford’s Hull FC have been struggling with injuries and have a number of first team regulars missing including Sika Manu, Danny Houghton and Dean Hadley.
Long-term absentees Marc Sneyd, Josh Bowden, Josh Griffin, Fetuli Talanoa and Jordan Abdull are all also unavailable.
Head-to-Head
With Josh Jones looking set to return for the Red Devils the second-rower features in this week’s head-to-head against Hull FC back-rower Mark Minichiello.
Jones has a powerful running game out wide for the Red Devils and is always a threat on the opponent’s line. The former St Helens man still sits second in terms of offloads for the team this season despite being sidelined for two months and his hands could very well create some openings for Salford on Friday evening.
Minichiello is a workhorse for the Black and Whites sitting fourth in FC’s tackle count so far this season. The Italian international – much like Jones – has terrific hands and sits second in the Hull’s offloading ranks thus far in 2018.
While both forwards defensive efforts will be massive for their respective sides the game could come down to one pivotal offload or play from the back-rowers to edge their team in front.
Squads:
Hull FC: Shaul, Faraimo, Tuimavave, Kelly, Taylor, Minichiello, Connor, Green, Washbrook, Fash, Paea, Logan, Lane, Downs, Miloudi, Matongo, Scott, Westerman, Harris.
Salford: Johnson, Welham, Sa’u, Lui, Littlejohn, Kopczak, Tomkins, G. Griffin, Jones, Flanagan, Tasi, McCarthy, Nakubuwai, Wood, Olpherts, Mossop, Bibby, Murray, Shorrocks.