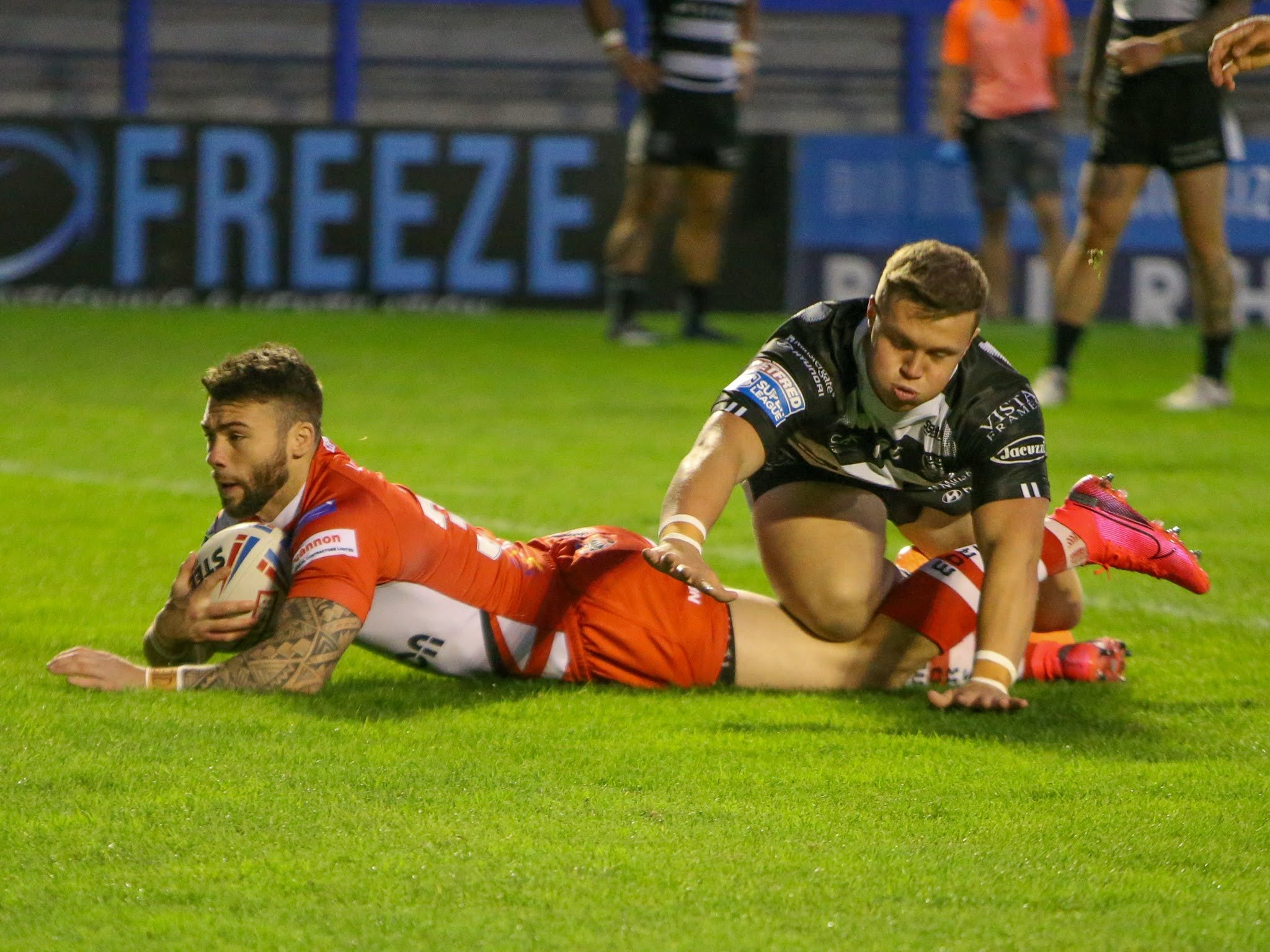 Salford Red Devils will face off against Hull FC over the Easter weekend in Round 2 of the 2021 Betfred Super League.

The behind-closed-doors game will be contested at the Totally Wicked Stadium on Saturday 3rd April and will be one of six matches that weekend to be shown live on Sky Sports.

The Easter weekend fixtures will be in support of Mose Masoe, with full details on how fans can get behind Masoe in showing their support closer to the start of the season.

“As he moves into the next phase of his life and continues his rehabilitation, it is fitting that Super League clubs, players and fans thank Mose for everything he has given to the game, and help support him and his family in the future.” 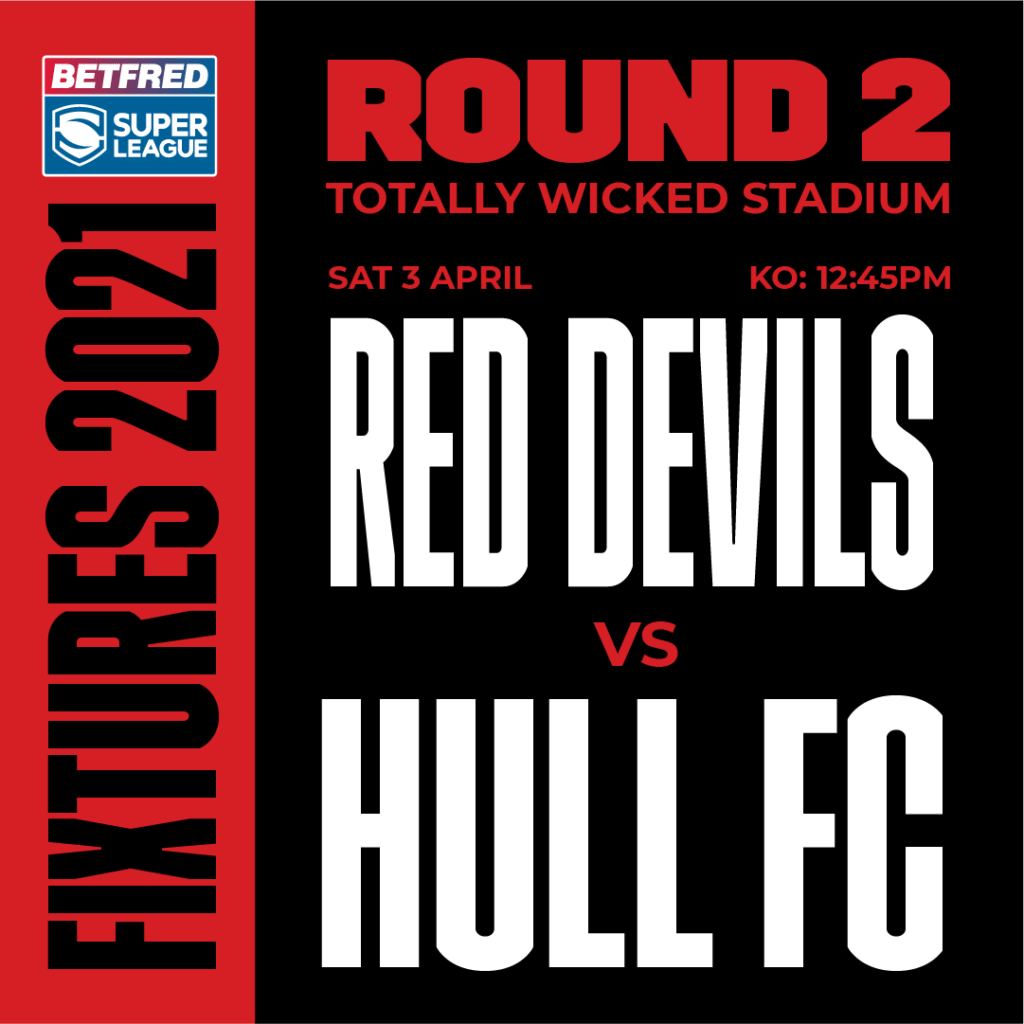 The “traditional” Easter weekend fixtures will be pushed back to a later stage of the season in the hope that fans will then be able to watch them in person.

The full fixture list for the 2021 Betfred Super League season will be released on 26th February.

Looking ahead to the Round 2 fixture, Salford did the double over the Black & Whites in the league in 2020 and will be hoping to carry that record over into the new season.

Subscribe to RDTV to rewatch the last time we played Hull FC in the league, and get behind the Red Devils by purchasing your own 2021 replica away shirt. 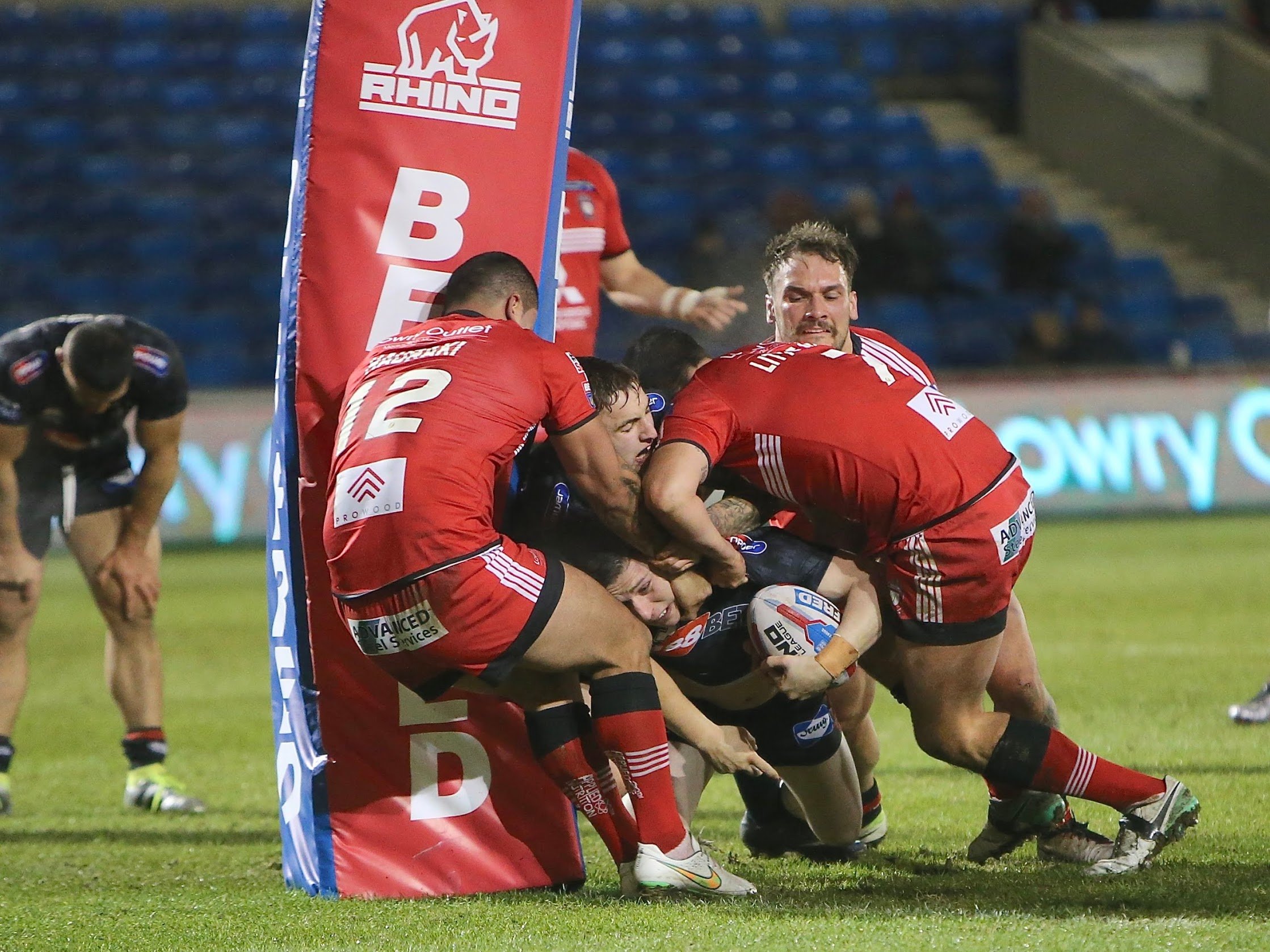 Ian Watson’s Salford Red Devils host newly-promoted Hull Kingston Rovers this evening in their third Betfred Super League tie of the 2018 season and are looking to get off the mark this year.
Match Preview
Salford Red Devils are built up quite the rivalry with Hull Kingston Rovers in recent seasons with Ian Watson’s side relegating the Robins in a dramatic 2016 Million Pound Game which was resolved following a mammoth Gareth O’Brien drop-goal in extra-time golden point.
Form
It may be difficult to use the word ‘form’ just a few weeks into the 2018 season but Hull Kingston Rovers do come into this weekend on the back of a comfortable victory over Catalans Dragons last week.
Tim Sheen’s side also put in a very impressive performance a fortnight ago narrowly losing against 2017 Super League winners Leeds Rhinos at Elland Road.
Salford head into tonight’s game looking for their first victory of the 2018 Betfred Super League season. However, the Red Devils were unlucky not to come away from Wakefield’s Mobile Rocket Stadium two weeks ago with at least a point.
The Red Devils outscored Trinity but, in the end, a Liam Finn penalty goal was the difference between the sides. Despite being edged out a fortnight ago Ian Watson’s men will head into tonight’s game fill of confidence.
Previous Meetings
Salford and Hull KR have become regular opponents in recent seasons – even playing each other last season despite the Robins being in the Betfred Championship. Salford came back from 0-14 down to win 24-14 in a match you can read about here.
In fact, Salford are now on a two-game winning run against KR including that dramatic Million Pound Game which maintained the Red Devils Betfred Super League status.
Salford have won seven games against Hull Kingston Rovers in the Betfred Super League while KR have won ten. There has been the solitary draw between the sides.
Head-to-head
In this week’s head-to-head we take a look at the prop-forwards in Lee Mossop and Mose Masoe.
Mossop, who was named team captain prior to the season, was extremely impressive a fortnight ago against Wakefield and is looking to make his mark on the Betfred Super League this season after an injury-hit 2017.
As for Masoe, the man is a powerhouse who will cause issues for any side down the middle with his sheer size alone. However, if Salford can deal with him in a similar fashion to Pauli Pauli and David Fifita they should have no issues.
Team News
Mark Flanagan and Greg Johnson come into Salford’s match day squad while George Griffin and Greg Johnson drop out.
Danny McGuire is the biggest absentee from Tim Sheens’ match day squad. Chris Clarkson and Will Oakes also miss out.
Andrew Heffernan, Nick Scruton and James Greenwood come into the Robins 19-man squad.
Salford: O’Brien, Johnson, Welham, Sa’u, Evalds; Lui, Littlejohn; Kopczak, Tomkins, Jones, Hauraki, Flanagan, Tasi, Burgess, McCarthy, Nakubuwai, Wood, Mossop.
Hull KR: Quinlan, Minns, Heffernan, Shaw, Scruton, Lunt, Masoe, Blair, Greenwood, Kavanagh, Jewitt, Lee, Marsh, Mulhern, Salter, Atkin, Walne, Tickle, Carney.