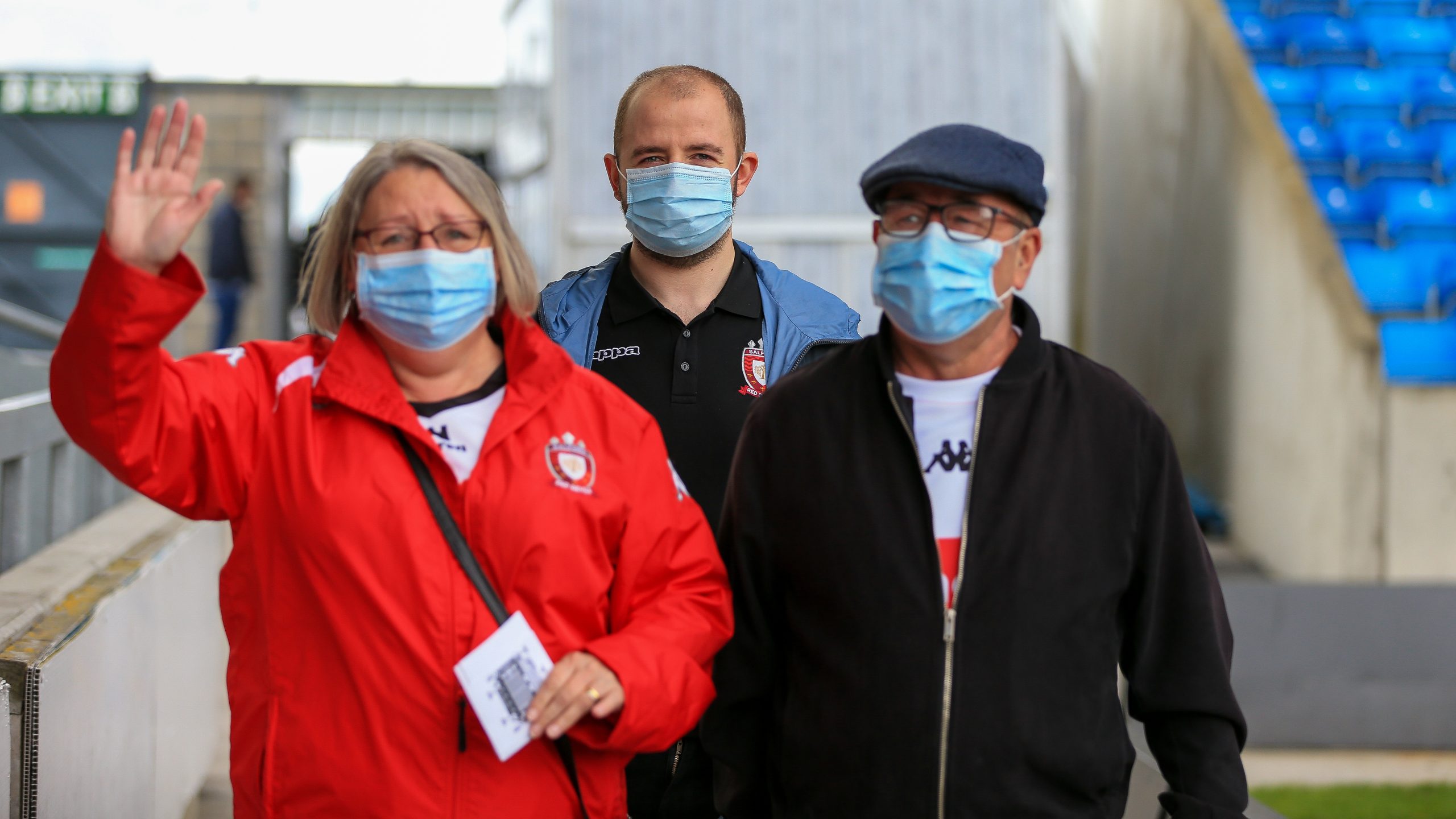 Salford Red Devils are pleased to announce that the Betfred Super League Round 8 home game against Warrington Wolves is now on general sale.

Although we love to have you back for live rugby, we ask all fans to follow and respect the Code of Conduct, stadium ground regulations and direction from signage and stewards on-site.

In order to create the best atmosphere possible, we will be allocating 400 tickets to the away club in the North Stand ONLY. If you are a Salford fan, DO NOT select a ticket in the NORTH STAND AWAY STAND. Likewise, WARRINGTON fans WILL NOT gain access to the east, south or west stands of the stadium.

We are encouraging people to book in bubbles of 6 as booking single tickets drastically reduces capacity.

HOW DO I BOOK?

If you are having difficulty in doing this or if you are a season ticket holder who has missed the ballot please email ticketoffice@ajbellstadium.co.uk

You can also call 01617861570 and choose option 1 for tickets and if this is not answered leave a message and someone from the ticket office will call you back.

WHAT HAPPENS WHEN I GET TO THE STADIUM?

There will be details on your ticket of what time you should arrive and what entrance to use. Different blocks will be given staggered arrival times and we ask you all to enter the turnstiles at the time stated. If you arrive too early, or too late, you may not gain access. There will be a one-way system in operation within the stadium. Please pay attention to signage and direction from stewards. You may be asked to show ID.

WILL I BE ABLE TO GET FOOD AND DRINK?

Unfortunately, kiosks will not be open in the standing areas as food and drink has been prohibited. If you are in a seated area you will be able to get food and drink from the kiosks.

IS IT SAFE TO ATTEND?

Although we cannot wait to have you back, we need to ensure that spectator safety is at the top of our agenda. Therefore, it is imperative that fans read and agree to the Spectator Code of Conduct and respect all rules and guidelines and keep fans safe from potential transmission of COVID -19.

DO I NEED TO HAVE A TEST?

No, you do not need to have a test before coming to the stadium. However, if you feel unwell please DO NOT attend.

If you have a season car park pass then that will be accepted. Car parking passes can be applied for in advance online or by contacting the ticket office. On-the-day parking will be available for £8. Parking at the stadium is limited and we ask that you only trave in your bubbles and follow guidance. For all information on travelling to the stadium, see here.

Once again, Salford Red Devils would like to thank you all for your continued support and understanding during this unprecedented time. 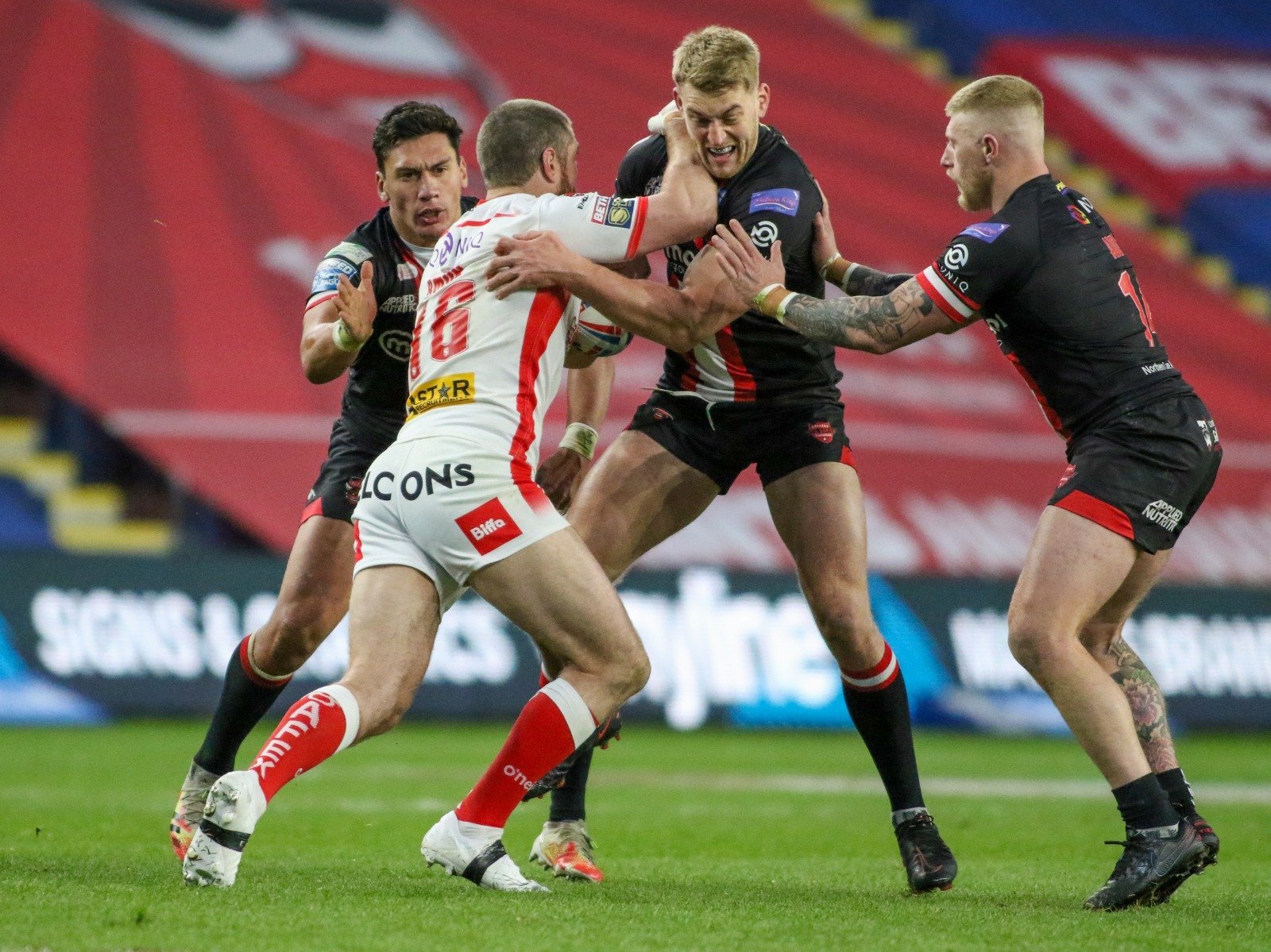 Salford Red Devils fell to a 29-6 defeat to champions St. Helens in the first game of the 2021 Betfred Super League season.

The season opener at the Emerald Headingley Stadium was Richard Marshall’s first Super League test as Salford’s head coach, with five debutants featuring in tonight’s defeat for the Red Devils.

Tommy Makinson opened the scoring for Saints within two minutes, collecting a chipped kick and grounding the ball in the right corner.

Saints’ Regan Grace slid over on the left wing five minutes before half-time to extend his side’s lead, with Jack Welsby scoring a drop-goal right on the hooter to make it 13-0 at the interval. 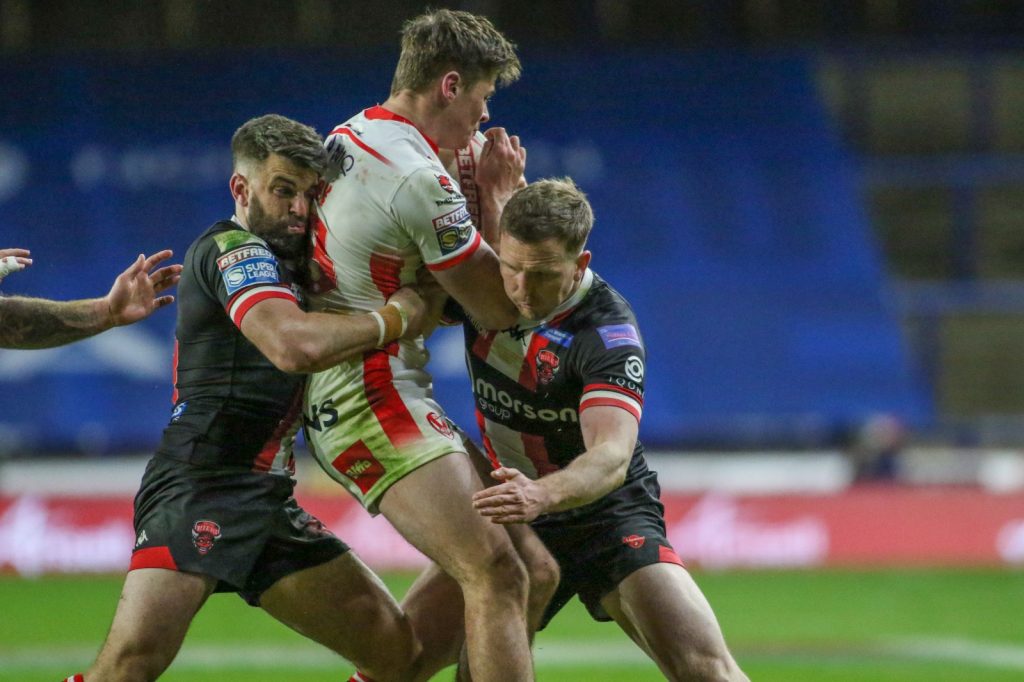 Salford came out looking sharper in the second forty and got themselves on the scoreboard in the 55th minute.

Tui Lolohea found Ken Sio on the right wing with an outrageous pass, setting his teammate up to stroll over with ease for our first try of the 2021 season.

Saints responded five minutes later through Mark Percival, who rose to collect a Theo Fages kick before touching the ball down.

Two more tries in the final 10 minutes from Kevin Naiqama and Alex Walmsley confirmed defeat for Marshall’s men in their first runout of 2021.