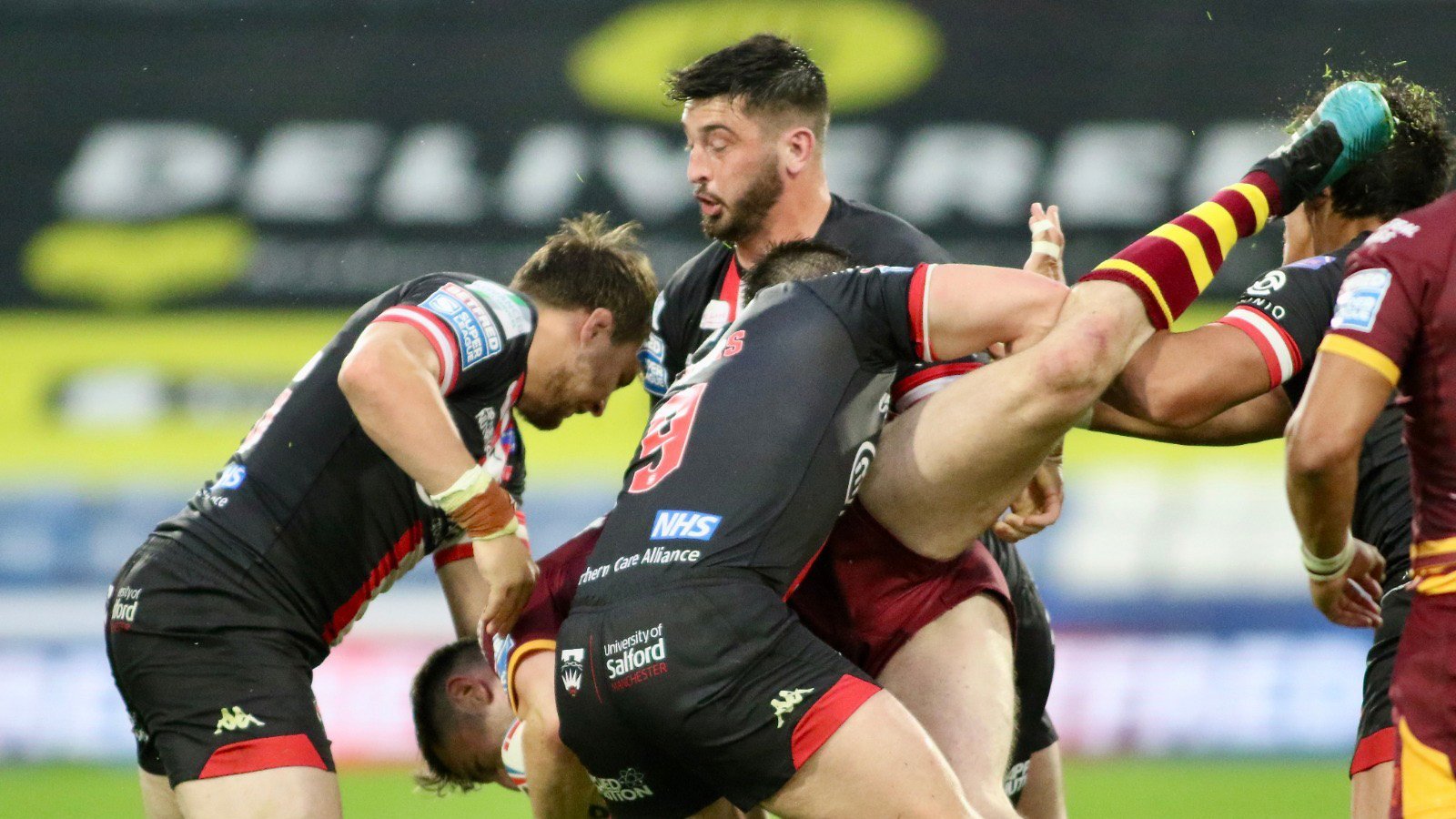 Salford Red Devils grounded out a hard-fought victory away to Huddersfield Giants tonight with a Chris Atkin drop-goal deciding it for Marshall’s men.

Taking the lead early on through Andy Ackers, Salford went into the interval ahead by six points and despite the hosts getting themselves on the scoreboard in the second forty, Marshall’s men saw the victory out with determination.

Salford’s number 9 gave the travelling Reds supporters something to cheer about after 11 minutes, scurrying under the sticks from dummy half to put his side ahead.

Both teams had promising spells following Ackers’ try and Huddersfield picked up their first points of the evening in the 34th minute through an Aidan Sezer penalty goal after James Greenwood saw red for a high tackle.

However, three minutes later, Salford cancelled those two points out with a successful penalty goal of their own. Dec Patton added the extras shortly before halftime.

The second forty was a war of attrition as both sides piled on the pressure.

Huddersfield finally found the try-line in the 48th minute and it was Joe Wardle, sliding over to the left of the sticks, who was the try scorer.

Despite losing captain Lee Mossop in the warm up through an achilles injury, Salford were gritty and focused and held off a number of Huddersfield attacks with a handful of try-saving tackles on their own line.

Chris Atkin put Marshall’s men ahead with 15 minutes to go with a finely executed drop-goal in front of the Salford fans, who had not stopped singing for the entire of the game. 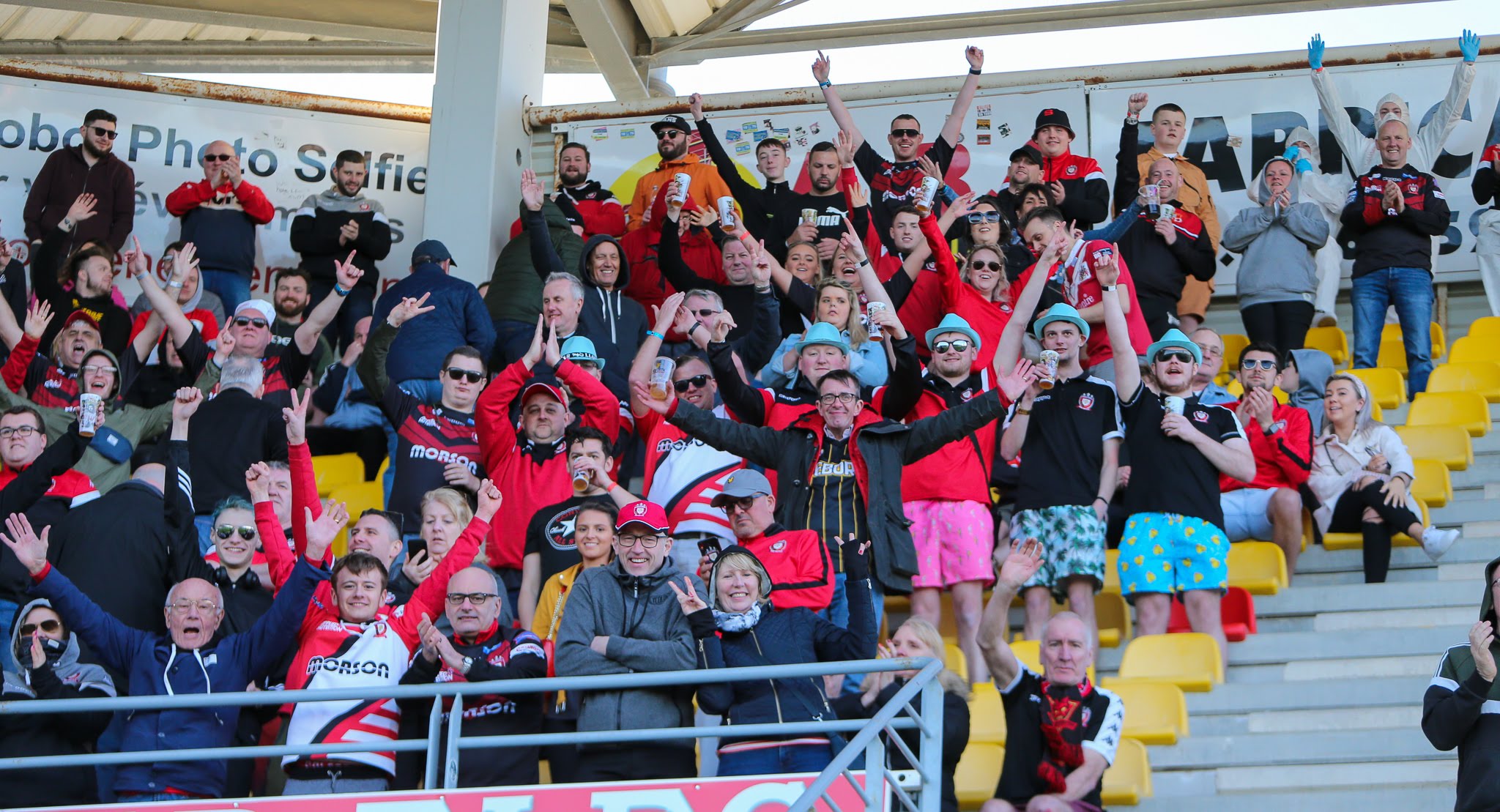 We are delighted to announce that Salford Red Devils fans will be able to attend our Round 10 away clash against Huddersfield Giants on 18th June at The John Smith’s Stadium.

The last time we had our beloved Salford faithful cheering us on in an away stand was 459 days ago in Perpignan when we faced Catalans Dragons in Round 6 of the 2020 Betfred Super League season.

Round 10 of the 2021 campaign promises to be a fiery occasion against a Huddersfield outfit that is now coached by former Red Devils head coach Ian Watson.

The tickets will go on sale online at 10am Thursday 10th June 2021 and can be purchased by following the below instructions:

Tickets are pre-printed from Huddersfield and will need to be posted out to you so please ensure your postal address is up to date. Huddersfield do not offer digital ticketing. There will be a postage fee added to every booking and this will be the only delivery option available. If purchasing online there will also be a booking fee.

If you are struggling online please email ticketoffice@ajbellstadium.co.uk with your phone number and the ticket office will call you back. Or ring 01617861570 choose option 1 for tickets and leave a voicemail if the line is busy.

Tickets are limited and will go off sale at midday on Wednesday 16th June in order for the tickets to be posted out in time for delivery before the game.

By Purchasing tickets, you are agreeing to the Huddersfield Giants’ Code of Conduct (below) and we stress that all rules must be adhered to whilst representing Salford Red Devils at away grounds.

Further information can be found via the NHS website: https://www.nhs.uk/conditions/coronavirus-covid-19/symptoms/

I confirm I will not attend if I have been contacted in line with the NHS Test and Trace or any other relevant body and are required to self-isolate.

I acknowledge and agree to the above requirements and have given careful consideration of the associated risks and my own vulnerability status in my decision to attend in line with government guidance, please see here:

I confirm that I understand I will not be permitted access to the stadium if I do not carry all required items requested by the Club to access the Stadium such as face coverings/sanitiser/additional hygiene protocols. Should I not agree with any aspect of this code I will not attend the venue.

Where purchasing on behalf of others I will make those individuals aware of their responsibility and required agreement to observe this code.