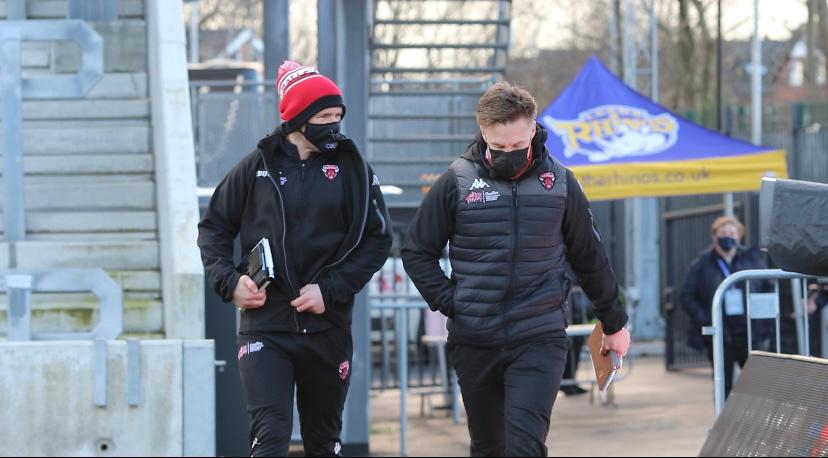 Salford Red Devils head coach Richard Marshall is confident his side can pick up the win against Hull FC on Saturday but is well aware of the dangers the Black and Whites pose.

The Red Devils face off against Brett Hodgson’s men in Round 2 of the Betfred Super League and Marshall expects a tough test on Saturday afternoon.

“I thought they were really good against Huddersfield. It looked like the individuals had really clicked already. Obviously, it’s a new coach and quite a few new players there, so they will be coming off a good performance, a good result.

“Our individuals have looked at some of the areas that we want to improve on collectively as a team. We think if we can keep hold of the ball for longer and we don’t make them errors, we’ll be able to sustain some pressure and put Hull under pressure with our kicking game.”

The head coach is also relishing a selection headache, with a 30-man squad all competing for positions.

Marshall added: “Everybody’s on their toes within our squad.

“It makes my job at bit more enviable in picking a 17 each and every week.”

👥 Richard Marshall has named his 21-man squad for our @Betfred #SuperLeague clash with @hullfcofficial this Saturday! 👇

With all Round 2 fixtures across the Easter Weekend dedicated to Mose Masoe, the former Hull Kingston Rovers forward who suffered a life-changing spinal injury in 2020, Marshall is proud of how the entire rugby community has come together to support the Samoan.

“That’s the beauty of our game and our sport. As a sport, our community focus and looking after each and every individual who has played the field, officiated, coached, we always have a really good affinity for that and that’s why this round will be so important.

“I think we always come together at times when players are in need and that is the beauty of our sport. We’ll certainly be supporting that, as we do with everything else that goes on in our game.”

Salford’s clash with Hull FC kicks off at 12:15pm on Saturday 3 April at the Totally Wicked Stadium and will be broadcast live on Sky Sports.

You can also watch the game on Our League if you purchase a Red Devils season ticket HERE.